“All men and women should have a voice in decision-making, either directly or through legitimate intermediate institutions that represent their intention. Such broad participation is built on freedom of association and speech, as well as capacities to participate constructively.” (Graham et al, 2003)

Evolution of electricity regulation in India with respect to consumer participation

The Indian Electricity Act, 1910, was largely focused on supply and usage of electricity, with no clear provision for consumer representation in decision making. But, the subsequent Act, The Electricity (Supply) Act, 1948, introduced State Electricity Consultative Councils and Local Advisory Committees which provided for representation of key stakeholders1. Although the committees did not involve domestic consumers, it was the much needed first step towards encouraging participatory decision making. Later, with the Central and State Advisory Committees as constituted by The Electricity Regulatory Commission Act 1998, an increased number of members were included to represent the interests of commerce, industry, transport, agriculture, labour, consumers, non-governmental organisations and academic and research bodies in the electricity sector. Finally, with the Electricity Act, 2003 (EA 2003) the sector began to explicitly make provisions for consumer participation and protection.

Preamble, The Electricity Act, 2003 (EA 2003): “An Act to consolidate the laws relating to generation, transmission, distribution, trading and use of electricity and generally for taking measures conducive to the development of electricity industry, promoting competition therein, protecting interest of consumers and supply of electricity to all areas, rationalisation of electricity tariff, ensuring transparent policies regarding subsidies, promotion of efficient and environmentally benign policies, constitution of Central Electricity Authority, Regulatory Commissions and establishment of Appellate Tribunal and for matters connected therewith or incidental thereto.”

Over the decades, with growing emphasis on consumer protection, significant structural reforms and policy changes have been driven by EA 2003. These have influenced the patterns of electricity governance and participation it promotes thereof.

(iii) Directed the establishment of autonomous electricity commissions; and

(iv) Highlighted the need to comply with the standards of performance of licensee as specified by the concerned commission after consultation with the licensee and persons likely to be affected.

Apart from contributing to installed capacity, progress of electrification and quality of service, the structural reforms driven by the Act have largely supported in building an ecosystem that provides scope for consumer protection through consumer participation, representation and access to justice.

Provisions for consumer protection in EA 2003

(i) Consumer participation in the decision making process: Section 64 (3) and Section 15(2) mandate public hearings and consultations to receive comments and suggestions on tariff and licensing issues respectively.

(ii) Representation of consumer interests in regulatory proceedings: As prescribed in Sections 80 and 87 of EA 2003, the State and Central Advisory Committees2 that advise respective Commissions are composed of members who represent the interests of consumers. Further, Section 166, provides for Coordination Forums at Central3 and State4 levels which act as platforms to enable coordination among represented stakeholders.

(iii) Access to justice through redressal mechanisms for consumer grievances: Section 42 (5 - 8) provides for establishment of Consumer Grievance Redressal Forums (CGRF) at each distribution circle and an Ombudsman at every state level. Further, any person aggrieved by an order made by an adjudicating officer under the Act or an order made by any of the Commissions may appeal to the Appellate Tribunal as defined in sections 110 - 124. 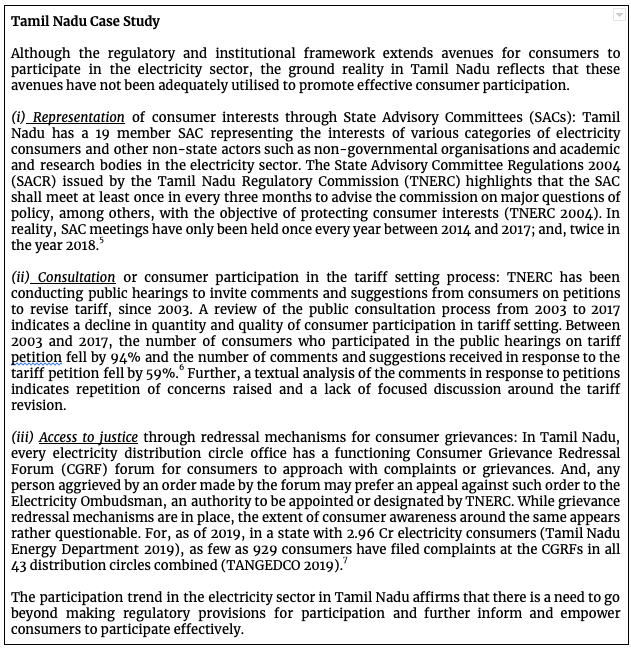 Firstly, the sector by nature is a natural monopoly and vests immense power on the utility. Secondly, there is no institutionalised consumer representation to ensure that consumer voices are heard and taken into account in the process of decision making. Finally, since electricity is a subject on the concurrent list, there is a lack of uniformity with respect to how the sector functions in different states. In reality, consumer participation and consumer protection in the sector is limited to providing access to justice and representation. Further, it must be highlighted that consumer participation is promoted in regulatory forums at the behest of regulators and consumer interests are protected during grievance redressal at the behest of administrators. This suggests that the drawback of the arrangement stems from the nature of the electricity sector and the way it operates. To overcome these inherent barriers for participation in the electricity sector, it is important to explore additional formalised, institutional representation which appear to enhance promotion of consumer interests in countries around the world.

Most countries that have an evolved system of regulation in the electricity sector have been backed by systemic and institutionalised representation of consumer interests and consumer participation. Some of the best examples include:

(i)  Electric Energy Consumers’ Councils in Brazil - The councils are composed of members from different consumer categories who work with the respective distribution licensee and develop their own projects, plans and strategies, apart from representing consumer concerns.

(ii) The National Association of State Utility Consumer Advocates (NASUCA) in the US - It is an association of 55 consumer advocates that represents consumers in nearly 50 states of the United States for issues such as service quality, reliability, and price stability.

(iii) Energy Consumers Australia - This organisation works to represent and promote the interests of energy consumers and works with other consumer groups to gather evidence-based research with a national perspective to influence outcomes in the energy market.

(iv) Intervenors in Ontario Energy Board in Canada - The electricity regulation in Canada makes provisions for interested parties to participate in administrative hearings by presenting consumer interests and challenging utility arguments.

There are a few common features that promote effective consumer participation and representation, like the ones listed above. Firstly, electricity legislations in the respective nations make provisions for such participation. Secondly, they are formal, institutionalised and woven into the structure of the electricity sector. Finally, sustainable financial support is extended to them through the State, or fines charged on consumers or utility or through crowdfunding. Meanwhile in India, even though the regulation has made provisions for such participation, they remain ineffective since they lack sustainable, institutionalised mechanisms for participation and resources to achieve the same.