Democracy and Air Pollution: Are they related?

COVID-19 pandemic, virus, lockdown, GDP, economic slowdown, and vaccine - these are some of the words that have occupied our brains from the last 6-7 months. The pandemic we are facing right now has taken its toll on individuals, as well as on countries’ economies. While most of the effects were negative, one opportunity for positive change was opened up by this crisis; it was that citizens have started  talking about how the public versus private goods play out in times as extraordinary as this pandemic. Governments world over aggressively promote privatisation of essential services like healthcare and education, but this crisis has shown the essential role that government infrastructure and services play in emergencies like during this COVID-19 pandemic. The hope for a vaccine for COVID-19 also highlighted the importance of public goods on the world stage as it will be essential that the vaccine is affordable to cover populations at large.

So, what are public goods? A public good is any product or service that is both non-excludable and non-rivalrous. “Non-excludable” means that people cannot be prevented from enjoying the good and “non-rivalrous” means that one person’s enjoyment of a good does not diminish the ability of other people to enjoy the same good. Some of the examples of public goods are clean air, clean water, biodiversity, national defence, police and fire protection, street lights, sanitation, stop signs, emergency call service, and disaster relief. Simply put, many of the goods or services that a government provides and that benefit the population every day are public goods. The quality of the environment we live in every day depends on public goods. In this article, we look at air quality as a public good and its relation with the regime type.

A search on Google Scholar with “Democracy and Air Pollution” throws up 2.35 lakh results within 0.06 seconds, indicating that this question is of interest to a wide range of academics, from the political to the environmental sciences. Here, we embark on a tour of different sources of air pollution (Figure 1) and the solutions for air pollution (Figure 2) as demonstrated by the World Health Organization (WHO), and their link to the democratic functioning of institutions. According to figure 1, the sources responsible for air pollution are a) industry and energy supply, b) transport, c) waste management, d) household energy, e) agricultural practices and, f) dust. The solutions as outlined in figure 2 are a) invest in energy-efficient power generation, b) build safe and affordable public transport systems and pedestrian and cycle-friendly networks, c) improve domestic, industrial and, municipal waste management, d) provide universal access to clean, affordable fuels and technologies for cooking, heating and lighting, e) reduce agricultural waste incineration, forest fires and, certain agroforestry activities, and f) make greener and more compact cities with energy-efficient buildings. We will explore the scenario of a low and high democratic society with the likelihood of implementing the solutions for each of the sources of air pollution. 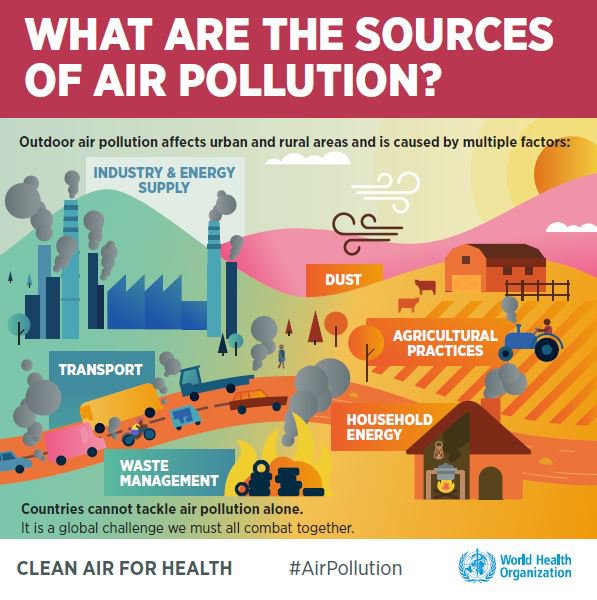 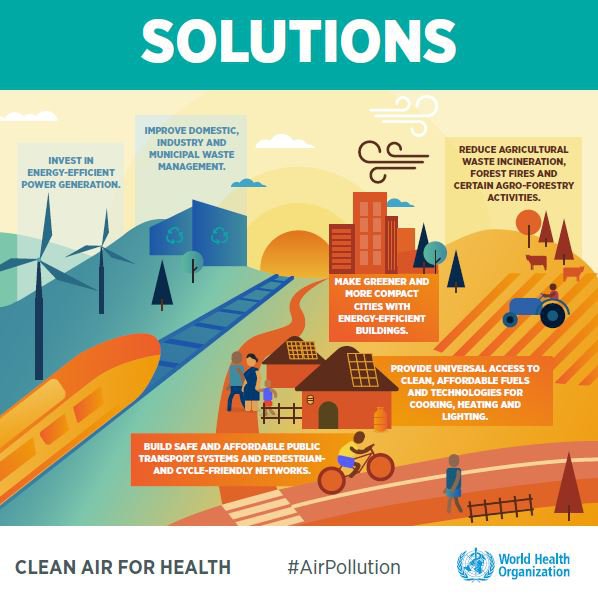 In a low democratic society, there is a high probability of a strong industrial political nexus that allows a leader/party to stay in perpetual power and the industry to continue to make profits at the cost of the local environment, and not invest in emission control measures. In such a society, there is no space for the citizen or the civil society to be heard and there is no accountability or transparency in governance structures. The status of public utilities and services is likely to be sub-par with public spending at the lowest and high corruption at all levels. So, the likelihood of a robust supply of services and products needed for solutions for air pollution is narrow. The continued stifling of democratic institutions, lack of freedom of the press results in a society where there is no questioning of the powerful. Their stay in power is fuelled by continuous extraction of natural resources, high levels of corruption and, denial of public goods. In such a society, issues of public health or the environment are of least concern.

In a highly democratic society, the industry-political nexus is continuously challenged by a strong and independent judiciary, by the opposition parties and, by alert and powerful citizens as well as civil society groups. In such a scenario, it becomes imperative for the industry to follow guidelines for environmental management, making it possible for the implementation of technologies and measures for control of industrial emissions. Democratic governance also allows for decentralised and functional waste management, a steady supply of clean affordable household energy, a robust public transport system, more green spaces in cities with pedestrian and cycling-friendly networks and, better regulation and control of agroforestry activities, forest fires and agricultural waste incineration. This is made possible by  greater power in the hands of the public leading to accountable and transparent functioning of the governance structures.

The scenarios described above are typical low and ideal high democracy scenarios; but in the real world, we often see a mix of these. The relation between air pollution and democracy is moderately correlated but it is in substantial proportions. A recent report from NGO Freedom House titled ‘Nations in Transit 2020: Dropping the Democratic Facade’ highlights how higher democracy leads to low mortality rate from air pollution in the Eastern Europe and Eurasia regions. In a democratic country like the US or India, there are fluctuations in the actual power and freedom that the citizens and the civil society enjoy, as well as in the independence of the press and the judiciary. Corruption is also at play in many democratic countries across the globe which weaken the democratic process and institutions. Additionally, there are challenges in adequately implementing policies in a country like India. For example, even after judicial intervention, our thermal plants still do not comply with the requirement of installing emission control equipment. We have the world’s largest rail network but very poor public transport systems in Indian cities. Cities in India are not at all friendly to pedestrians or cyclists, nor do we have efficient waste management plans. A large number of Indian households continue to use solid fuel for cooking and heating, a practice which is extremely unhealthy for the human respiratory system. In allowing industries to toy with the environmental laws of our country, we are snatching away the right to life of impacted citizens. There have been instances where the Indian judiciary at the highest level has acted to restore our faith in the democratic process by ensuring that the power of the citizen stays with the citizen. The historic Niyamgiri case of the Dongra tribe against a mining giant is one such case where the democratic decision of the gram panchayats of not allowing mining in their forests was recognised by the Supreme Court of India. Figure 3 shows how higher democracy leads to better environmental quality. 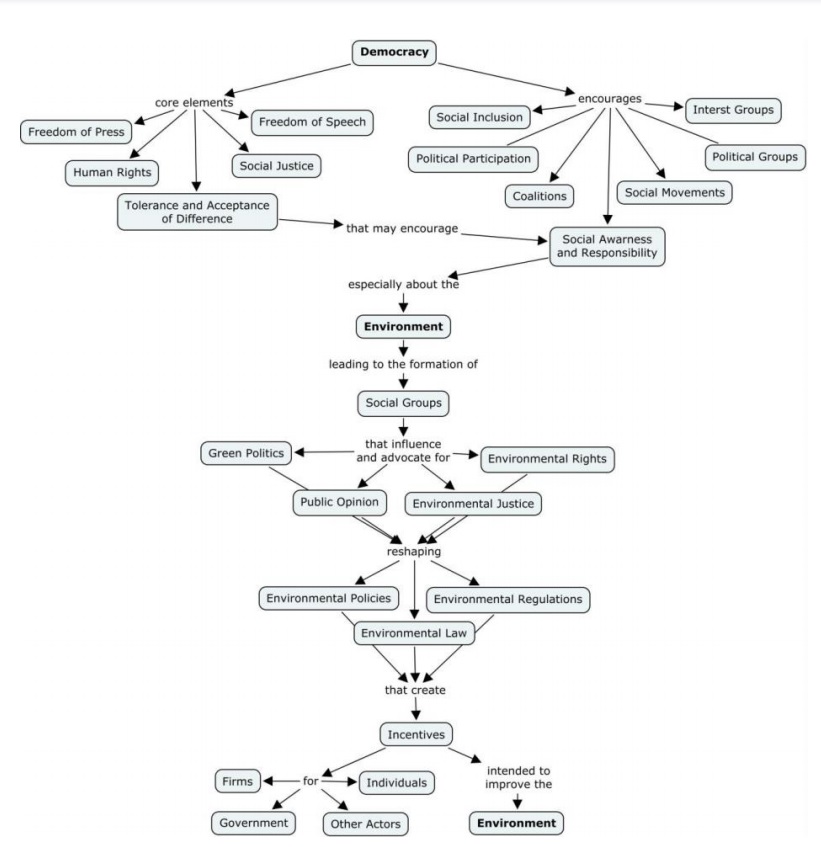 Figure 3: Flow chart of ideal democratic setup and its benefit to the environment

We have to be very clear that air pollution is not only affected by the high or low level of democracy but also by other factors such as the size of the democracy, national income, geographical location, and available infrastructure. We have also seen during this pandemic period, different democratic governments under the cover of the pandemic,  trashing laws which protect the planet. This has given us better insight into the link between a robust democracy and air quality. Even though the regime type, at first sight, may not appear directly correlated to air quality, it may be a critical intervening variable that influences the level of air pollution and thereby the quality of the environment. A democratic government that emphasizes political rights and freedom of information has higher chances of protecting the environmental quality because it respects the interests of environmental support groups who in turn raise public awareness and thereby encourage the formation of strong environmental legislation.