Growth of solar in TN:

The adoption of solar PV technologies in the world has witnessed rapid growth in recent years. As per a Mercom report, in India, over 3 GW of solar has been added in the first quarter of 2022 when compared to the previous year of the same quarter. As of 31.05.2022, Tamil Nadu installed 5572.22 MW of solar power.  However, in Tamil Nadu, the growth of rooftop solar (RTS) has dropped. As of June 2021, only 334 MW of the LT consumer category solar energy (ie., rooftop solar system) was installed in the state, which has a target of 3600 MW by March 2023.

Studies suggest that the introduction of a net feed-in mechanism in solar policy 2019 and a feed-in tariff regulation for solar generation has resulted in the drop in rooftop solar installation. Distributed Energy quoted that even though Tamil Nadu could become a self-sufficient state considering its solar potential, state solar policy, regulatory and administrative hurdles could be  hindrances to achieving its renewable energy goals.

As per the latest TNERC order on "Grid Interactive Solar PV Energy Generating System Regulations 2021," the Regulatory Commission allows LT Domestic consumers who installed a grid-connected RTS system the option of choosing a net metering mechanism (the solar energy exported to the grid will be adjusted by deducting the energy imported from the grid. Hence the prosumer will be billed based on the net import or export on the basis of the applicable tariff) or net feed-in mechanism (where the prosumer will get a monetary value for the solar energy exported to the grid which is fixed by the licensee and the monetary value for the imported energy will be calculated based on the applicable tariff. The net billing amount will be calculated by deducting the monetary value for the exported energy with the monetary value of imported energy). However, other than the domestic service connection, all the LT connection has only the option of a net feed-in mechanism.

In addition to consumption charges, all types of consumers who installed a grid-connected RTS system have to pay Network charges.

As per TNERC’s Grid lnteractive Solar PV Energy Generating Systems Regulations, 2021, issued on 07.10.2021 “Network charges means and includes all charges besides incidental charges incurred by the Licensee for creating, developing and maintaining the network for its functions and operations that includes providing the essential grid support to the Grid interactive Renewable Energy Systems for its dependant parallel operation without which such Grid interactive system cannot operate independently”:

In other words, network charges are defined as the charges collected by the utility for enabling the smooth functioning of  grid-connected RTS; as these cannot function without the utility grid’s support. These charges are calculated based on the units generated in the system, as fixed by the licensee.

The feed-in tariff has been revised to Rs. 3.61 per unit from Rs. 2.08 per unit of export. However, the newly introduced network charges will offset this advantage; it is unlikely that the prosumers will reap any real benefits from this increase in feed-in tariff.

Since there is no meter fixed by the TANGEDCO to measure generated units, TANGEDCO assumes that all RTS systems will be generating 5.04 units per day (considering that all the system has a Capacity Utilisation Factor (CUF) of 21%).

The  Citizen consumer and civic Action Group (CAG) office has  installed a 4 kW rooftop solar system. For the months of March and April 2022, TANGEDCO has reported that CAG’s RTS system generated 1210 units in 60 days. (While the actuals will vary, we were unable to ascertain these as  the wifi connection was interrupted during this period).  CAG was billed Rs. 1,536.7 as network charges.

However, as apparent from the CAG bill below, information regarding network charges is not transparent to the consumer. Consumers have to approach their respective section office for additional information on the network charges billed, should they need it.

Network charges and their implication on the Electricity bill:

Let us look at how this will affect consumer bills under (i) net metering mechanism and (ii) net feed-in mechanism. We will analyse the differences using CAG’s bills as a case study.

We will assume CAG’s electricity consumption during 2018 - 2019, for illustration purposes, for this blog. 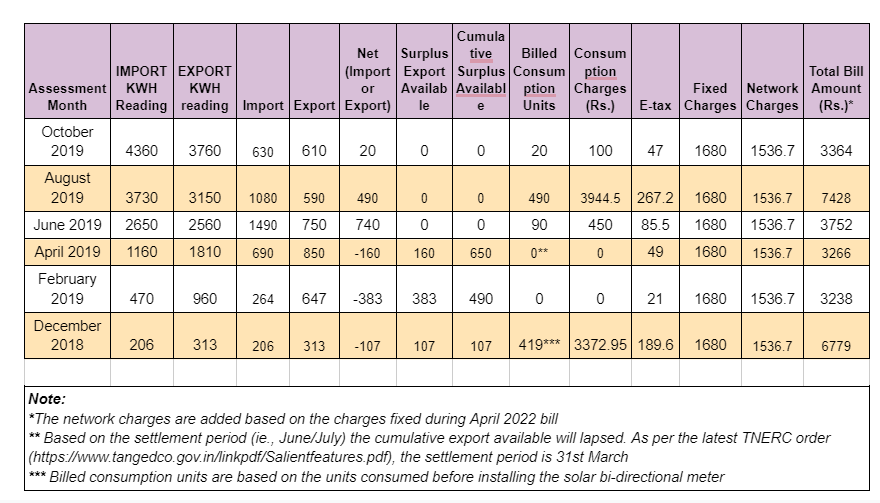 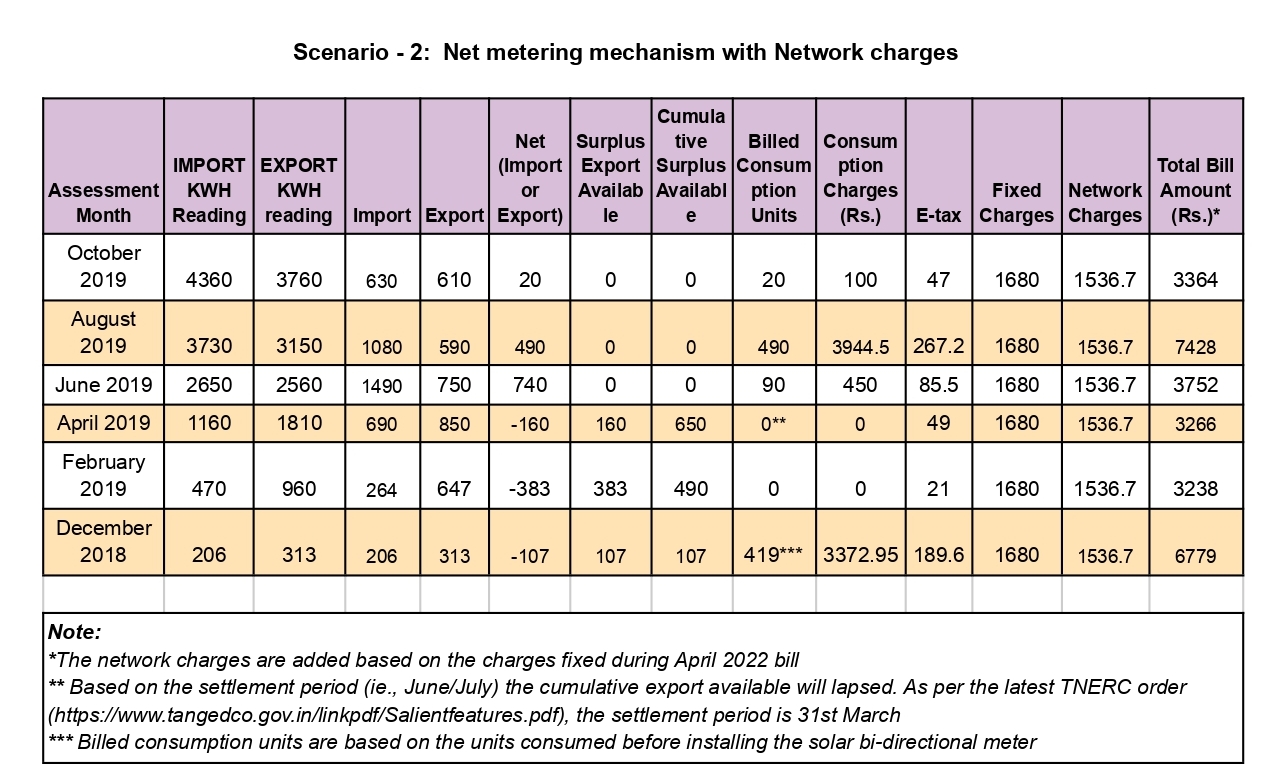 Based on the CAG electricity consumption data, the below table compares the amount to be paid annually by a consumer who falls under (i) net metering and (ii) net feed-in mechanism

Also, domestic prosumers are paying energy consumption charges and fixed charges for their service connection. Commercial prosumers are paying energy consumption charges, fixed charges, and e-tax for their service connection. TANGEDCO already collects fixed charges for the operation and maintenance expenses of the network from all types of consumers. This amount is determined by TANGEDCO and approved by TNERC at the time of submission of  the application for tariff determination. It could therefore be assumed that the newly created network charges are already subsumed under ‘fixed charges’ described above, implying that the consumer is paying twice for the same service provision.

If such additional charges are to be justified, the regulation must explain how the cost of operation and maintenance expenses of the network will differ for general consumers and prosumers who install rooftop solar systems, where the prosumers are also supplying electricity to the utility without overloading the present grid system. Thus, the introduction of network charges appears an unjustified burden on consumers and will only serve to reduce the growth of rooftop solar, despite the drop in solar panel costs by up to 40%.

The above analysis indicates that the introduction of network charges does not amount to   consumer-friendly policies. Policies that do not burden consumers/prosumers are what we need from the state nodal agency or the respective regulatory bodies if we are to achieve the consumer category solar energy target of 3,600 MW by 2023.