Public financing of coal in the midst of climate crisis

As the public financing of coal fuels the climate crisis, it is crucial that all financing institutions make available to all the basic right to know if their money is being funneled into sectors responsible for environmental and human rights violations.

Rationale for this study:

Public money is the lifeblood of good governance. It is what is used by the government to provide essential services to the public and build an ecosystem conducive to all sections of the society. This money consists of the various taxes and levies collected by the government and the deposits of the public like those in pension funds, post offices, and public sector banks. The money deposited (in term deposits) in banks and money paid as insurance premiums to the insurance companies is in turn used by banks and insurance companies to invest and lend to various sectors based on profitability and on priority sectors identified by the government for such lending. Coal is one such sector which historically has been very lucrative where public sector enterprises (banks, insurers and specialised finance institutions) invest and lend money. Therefore, it is pertinent that we delve into the details of what is done with our money, especially with respect to  lending to coal mining, coal based power generation and transmission industries.

According to the Intergovernmental Panel on Climate Change (IPCC) special report “Global Warming of 1.5°C”, the world has 9 years to get a 45 per cent reduction (20.7 gigatonne) of greenhouse gas emissions, expressed as carbon dioxide (CO2) equivalent, from 2010 levels (46 gigatonne of CO2), and 29 years to achieve net-zero targets. Owing to their greater share of the total greenhouse gas emissions, G20 nations have a bigger role in determining the extent to which the 2030 emission reduction targets can be met. Phase-out of coal-fired power plants have an annual GHG reduction potential of 8.7 per cent (4 gigatons of CO2) by 2050. Banking on Climate Change 2020 highlights that 35 private sector banks have together channelled USD 2.7 trillion into fossil fuels since the Paris Agreement was adopted (2016-2019). Of this, the top 30 coal mining projects have received USD 54.462 billion while the 30 top coal-based power plants have received USD $138.524 billion between 2016 to 2019. Overall, 343 coal power projects are being financed globally for 300 GW of new capacity addition (up to 2030). In India, new coal plants under construction have a total capacity of 59,810 MW, of which more than half the share is of the state (central and state governments). Such financing of the fossil fuel industry weakens global efforts to stay within the 1.5°C target. Natural disasters like storms, floods, and droughts have already doubled in the last two decades and most of these are linked to climate change.

Behind China, India is the second biggest individual driver of primary energy consumption growth, which rose by 2.3 per cent last year. India’s energy-related CO2 emissions continued to rise to 2,480 million tons of CO2 in 2019, and coal represents 73% of total electricity generation in India. Like many other countries of the world lower energy consumption during the COVID-19 related lockdown and a nominal decline in the share of coal in the electricity mix led to the first decrease in CO2 emissions in the last four decades in India. However, this is only temporary and emissions are likely to rise again with opening up of economic activity. Coal mining and coal-based power generation, and transmission in India have traditionally been public enterprises funded and operated by the state (central and state governments). As of September 2020, 63 per cent of the 199 gigawatts (GW) of installed capacity of coal fired power plants, are owned and operated by the state.

In this article, we look at the public financier’s responsible for financing coal mining, coal-based power generation and transmission industries. Scheduled commercial banks, insurers, development finance institutions and pension funds are some of the agencies we have looked at. Information in investments, credit access (loans), non-performing assets (NPAs) and loan write off of public sector banks and insurance companies to coal mining, coal-based power generation and transmission industries, as of March 31, 2020, was obtained by filing applications under the Right to Information (RTI) Act. The time taken to receive responses varied from 2 weeks to more than 5 weeks, as many agencies shifted the RTI application from one department to another. The list of all the agencies from whom the information was sought is in Annexure A.

Based on the responses received to our RTI applications we identified six public sector banks and three insurance companies that have investments of more than 500 crores in coal mining, coal-based power generation and transmission industries (figure 1).

We identified twelve public sector banks and one insurance company that have sanctioned credit facilities to the coal mining, coal-based power generation and transmission industries. State bank of India alone accounts for 65 per cent of the sanctioned credit amount from the total of twelve banks in figure 2.

Thirteen public sector banks and one insurance company have outstanding credit (loan) amounts of more than 500 crores in coal mining, coal-based power generation and transmission industries. At 44 per cent for Rural Electrification Corporation (REC) and 42 per cent for SBI, they together occupy 86 per cent of the outstanding loan pie (in figure 3). 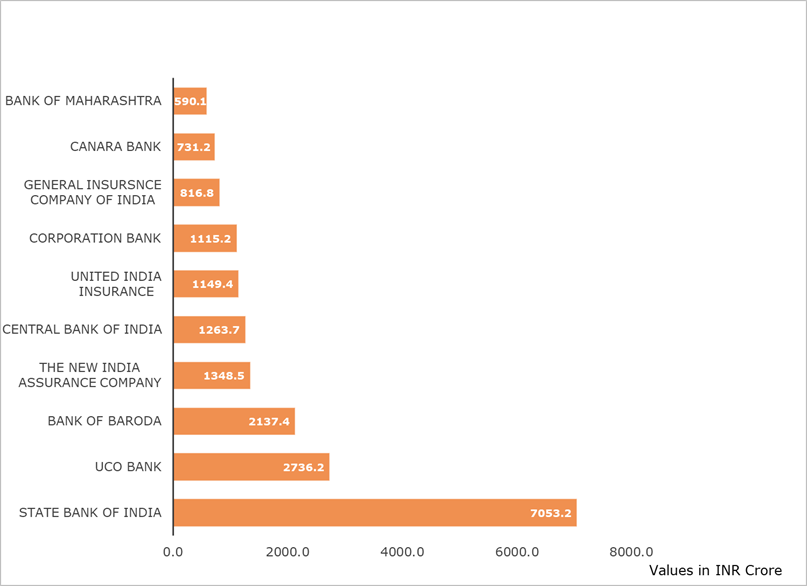 Figure 1: Public sector banks and insurance companies’ having investments in coal mining, coal based power generation and transmission industries in India, as on March 31, 2020. 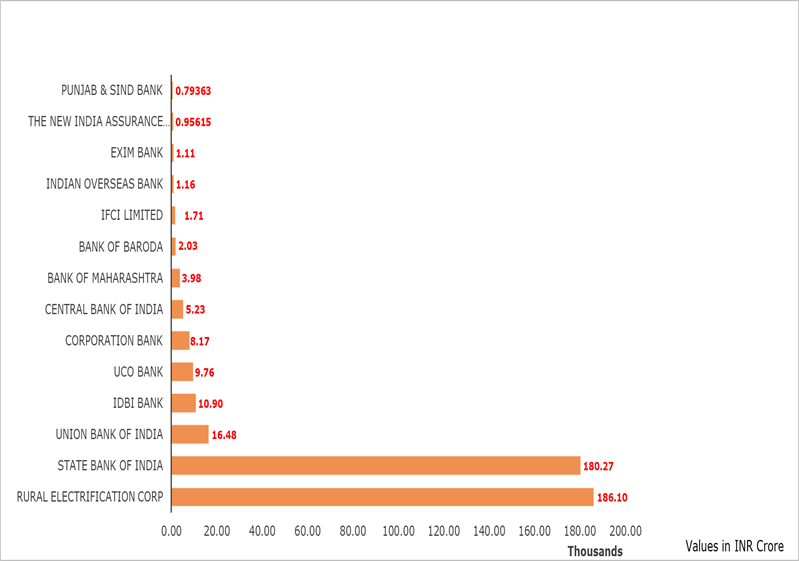 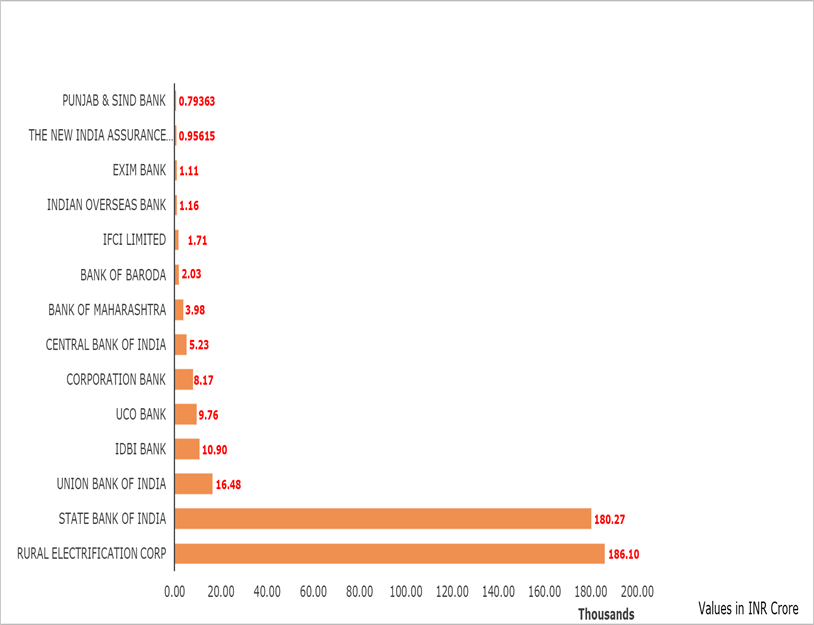 There is an asset-liability mismatch for the public sector banks lending money to the coal mining, coal-based power generation and transmission industries because the banks have money (liability) deposited by the Indian public on short term basis as compared to the money (asset) lent by the banks to the industries on a long term basis. There is increased pressure and spotlight on the phase-out of coal due to pollution, climate change and biodiversity loss concerns. The sector is also plagued by falling tariffs of renewable energy, regulatory changes, reduced power generation from coal, cost overruns due to land acquisition delays and expenses to become environmentally compliant.

A loan (principal and interest) when not paid on time results in a non-performing asset. According to the Reserve Bank of India (RBI), an account is declared NPA when payment is overdue for 90 days. As per the data received in our RTI applications, eleven public sector banks have NPAs of more than 500 crores in coal mining, coal-based power generation and transmission industries (in figure 4). Peculiarly, most of the banks, insurers and finance agencies denied having any information regarding their NPAs in the coal mining, coal based power generation and transmission sector.

When the banks are unable to recover outstanding loans from these industries after repeated attempts banks may opt for a settlement in which a part of the loan or the entire loan is waived off. We identified six public sector banks that have written off loans worth more than 500 crores in coal mining, coal-based power generation and transmission industries (in figure 5). Among the loan amount written off by the six banks, Bank of Maharashtra alone has written off 63 per cent. 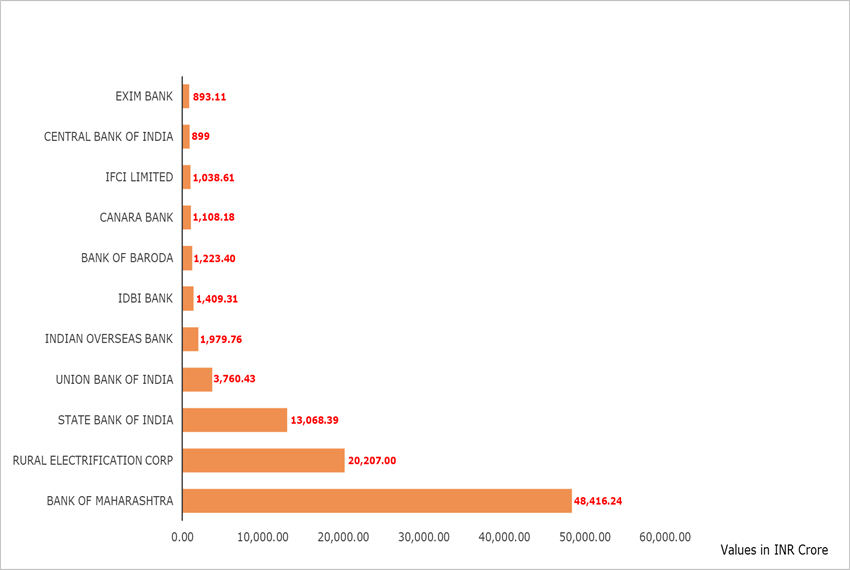 Figure 4: Public sector banks and insurance companies having NPAs in coal mining, coal based power generation and transmission industries in India, as on March 31, 2020.

Two banks, State Bank of India and Bank of Maharashtra have the highest amounts for credit (sanctioned and outstanding), and loan NPA and loan write off, respectively. The banker to every Indian is also India’s largest financier of climate change, as it lends globally to coal mining and nationally from coal mining to power transmission. SBI is in the midst of controversy for plans to support Adani Group’s coal mining project in Australia and is facing protests both in India and Australia. 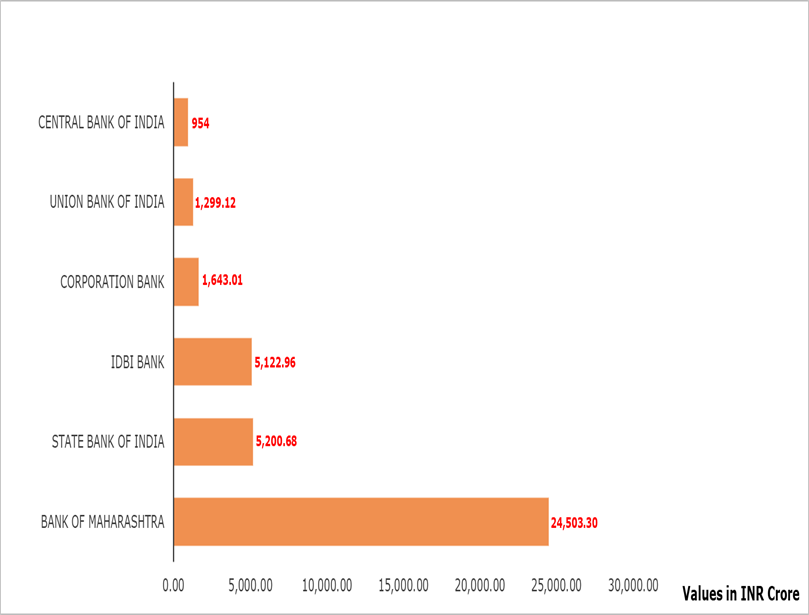 There is not much in the public domain when it comes to the investments or lending practises of public sector enterprises except the limited information one can get from the voluntary disclosures by banks under the Basel III framework. What further keeps the depositors away from information is the basic difference between a depositor and shareholder. As a depositor, one is assured a fixed rate of return in exchange for voting power which can decide on the investment and lending priorities. This voting power is in the hands of the shareholders of the public sector enterprises. Considering the urgency of making peace with nature for the survival of our own species, it is crucial that all financing institutions (public and private) make available to all (depositors and shareholders alike) the basic right to make sure that their money is not being funneled into sectors responsible for environmental and human rights violations. At such a critical juncture, as we all understand the need to drastically reduce greenhouse gas emissions and limit the rise in global temperatures, financing of the fossil fuel industry not only weakens the global effort towards climate action to stay within 1.5° C but also has the potential to ramp up the global temperature by 4° C. More awareness and public scrutiny as to where the money is channelled through the financing institutions, is needed now more than ever. RBI, as the sovereign regulator, should come out with lending and investing guidelines for banks and other financial institutions, mandating a consideration of the overall environmental burden of a project. One way to do so is to ask banks and other financial institutions to link lending and investment decisions with the environmental clearance (EC) of projects. Another aspect that RBI should consider for these guidelines is to fix accountability in the banking sector with respect to power plants flouting environmental norms.

India’s ambitions for climate action are likely to help India achieve the below 2℃ path of the Paris agreement but falls short of the much needed below 1.5℃ path. What will take India truly on a revolutionary path of sustainable development and livelihoods is opting for decentralised and off-grid or micro-grid solutions for electricity access to entire populations. India’s vast and diverse geography is not a challenge for providing universal access to electricity if we opt for micro-grids or off-grid rooftop solar, small scale wind and hydropower. For banks, opting for such small scale lending to individuals or groups will also help them avoid the biggest defaulters i.e. the corporates who are single handedly responsible for the crisis of the Indian banking sector. However, it will require humongous efforts and a leap of faith from the banks and insurers as most of them in their RTI response have informed that they either do not have a timeline to divest from coal and any future decision would be based on profitability and on government policies. This needs to change and banks need to not only look at profitability but also the overall environmental burden of projects   before lending money. By keeping the power sector as a public enterprise, India can make it possible  for environmental and social concerns to take front row as compared to profits, which usually is the primary motive of the private sector. However, we need to take these concerns seriously and place them at the heart of the energy sector. The pause due to COVID-19 linked lockdown is an extraordinary chance to make this transition away from coal happen. This change in lending priority would also help the banks and insurers adapt to Environmental, Social and Governance (ESG) principles of conducting business.

Annexure A: List of institutions to whom RTI applications were filed