Pudukuppam: On the Brink of Ruin

Cuddalore is an important coastal district in Tamil Nadu, and is classified as a critically polluted  industrial town by the Central Pollution Control Board in 2010. Despite this dubious distinction, the proliferation of polluting and hazardous industries continues, making the residents of Cuddalore even more vulnerable. Situated in the Parangipettai block of Cuddalore district is the fishing village of Pudukuppam.

The village is home to about 520 households, according to Cuddalore’s Disaster Management Plan, 2017. A majority of these are artisan fishers, whose livelihood is shallow fishing. Operating about 90 small fiberglass boats, these fishermen do not venture out into the deep sea. Cuddalore district is especially vulnerable to flooding, and was badly affected by the tsunami in 2004; 124 people from this village then lost their lives.

A village affected by natural disasters like the tsunami and cyclones now also finds itself impacted by polluting industries. In 2015, IL&FS Tamil Nadu Power Company Limited (ITPCL) commissioned the first unit (600 MW) of its 3180 MW power plant. The next year, a second unit with similar capacity was commissioned. The power plant itself is situated on the northern bank of the Vellar river, at a distance of 1.5 kms from the mouth of the river. The project site boundary is 100 meters away from the eastern side of Buckingham Canal. Pudukuppam is situated just 50 metres south-east of the power plant boundary. 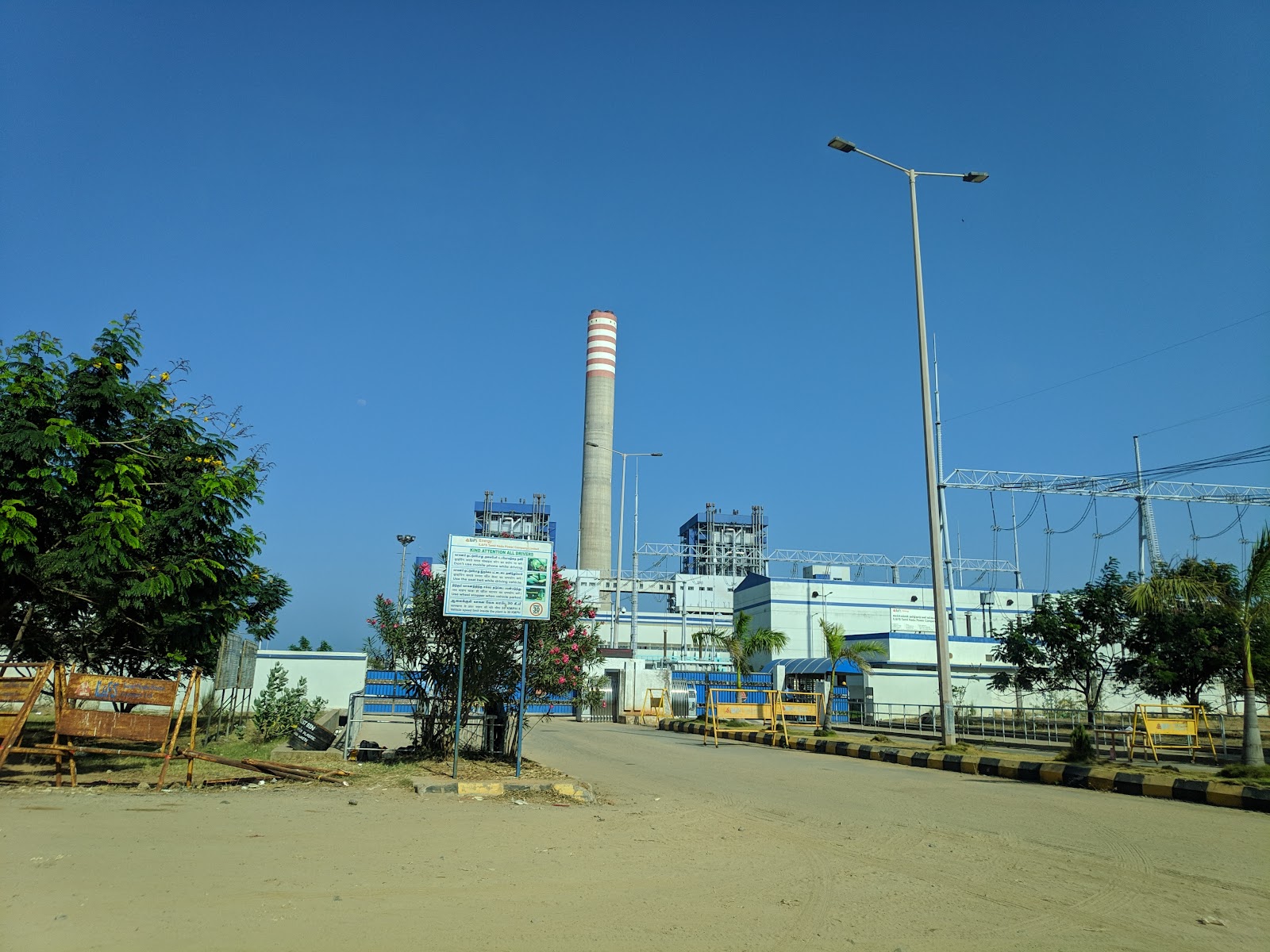 Pudukuppam is very close to the coal-unloading area of the plant. It is here that the Indonesian coal, brought in from Karaikal port in rail wagons, is offloaded. Without adequate mitigation measures, coal particles mix in the air, causing respiratory problems amongst residents exposed to these significant pollutants. The process of burning coal also releases particulate matter, sulphur dioxide, nitrogen oxide, and mercury, which affects land, soil, and air, apart from causing other health implications to those living in the neighbourhood. 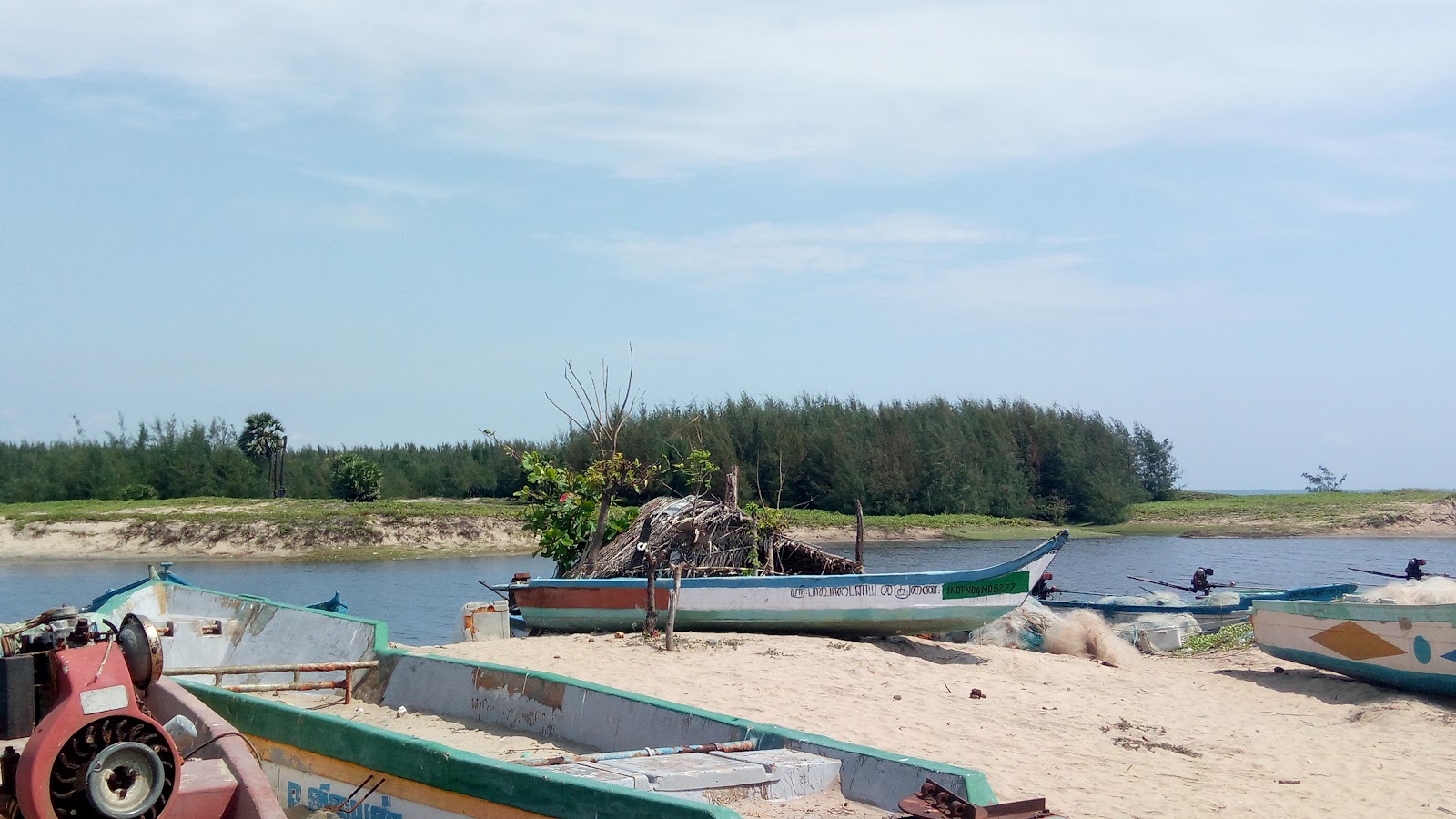 The first direct impact of the power plant on the village was the loss of space to berth boats. The fishermen would traditionally berth their boats along the shore but in 2014, they were forced instead to use a widened canal, some distance from the sea. “Earlier, we used to be able to take our time to gauge the wave and wind direction to steer our boat accordingly, but now, as we use the narrow passage between the breakwaters created for us, we no longer have that luxury,” said a 46-year-old fisherman, who does not wish to be named. “As our boats have to enter the sea one by one through this narrow passage, we cannot take a lot of time. Strong winds cause our boats to hit the breakwater and get damaged,” he added. According to the villagers, two people have lost their lives in such mishaps in 2018. The mouth of the canal is also prone to getting closed, and the fishermen often have to pay for the services of a digger to pull the boat out to sea.

No indication of discharge pipe and damage to fish

Another serious impact of the plant on fishing is from the marine outfall channel, which carries water from the cooling tower and brine from the Desalination Plant. The plant is required, as per the conditions given in its Environmental Clearance, to cool the discharge water in a guard pond before letting it out (Specific Condition X). The fishermen claim that the discharged water is of high temperature, which affects certain fish species, thereby reducing their catch. The ITPCL discharge pipeline- according to the EC (point 2)- should be discharged into the sea through a 1.5 km long marine diffuser. To indicate the actual location of the discharge pipe, the power company originally installed buoys; but fishermen say that within one year the buoys broke and have not been reinstalled. Now, unable to identify the location of the discharge pipes, their boats often hit the discharge pipes, or their nets get damaged by them. “Sometimes, we guess the location of these pipes when we see dead fish floating in the sea,” said a fisherman, as he spoke about the loss of catch over the years. 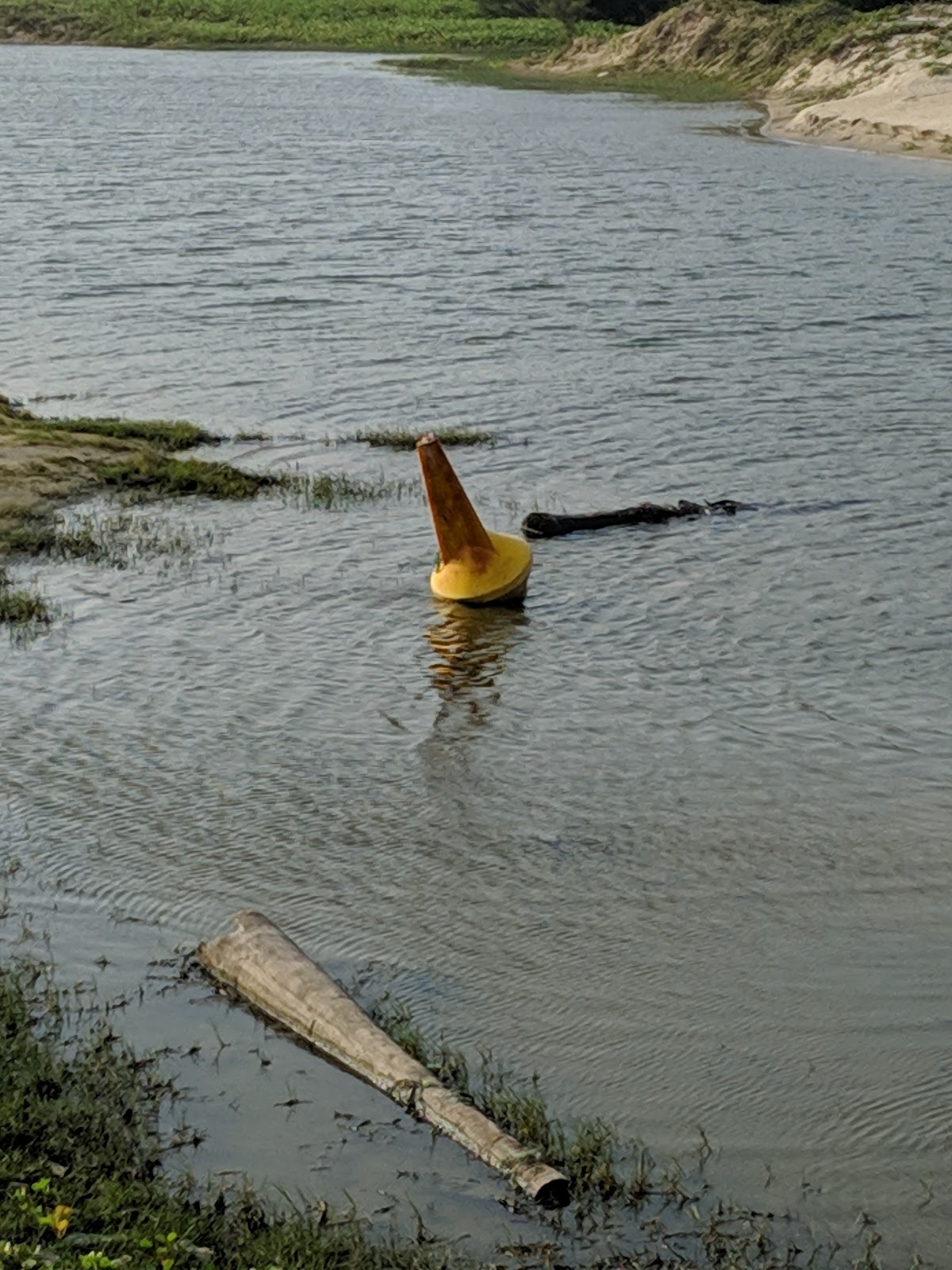 Before the inception of the plant, the fishermen’s catch included a large variety of fish and in large quantities. But more recently, the variety and quantity of fish have dwindled. An average catch these days includes only a few varieties such as sardines (including mathi and kavalai), and mackerel (kaanangatha). “Snails and crabs survive higher temperatures better than a lot of fish species, and so we find more of those,” says another fisherman. 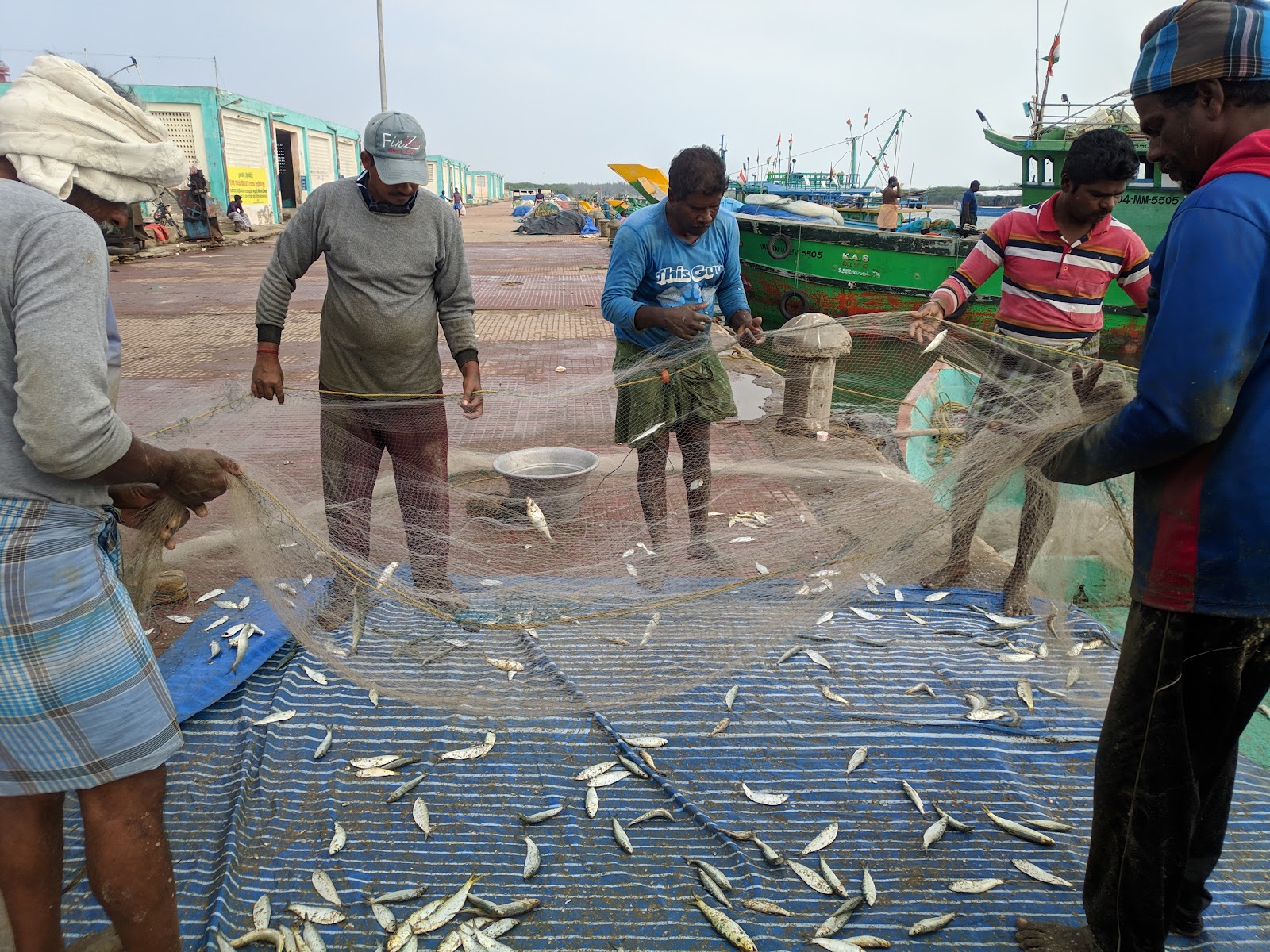 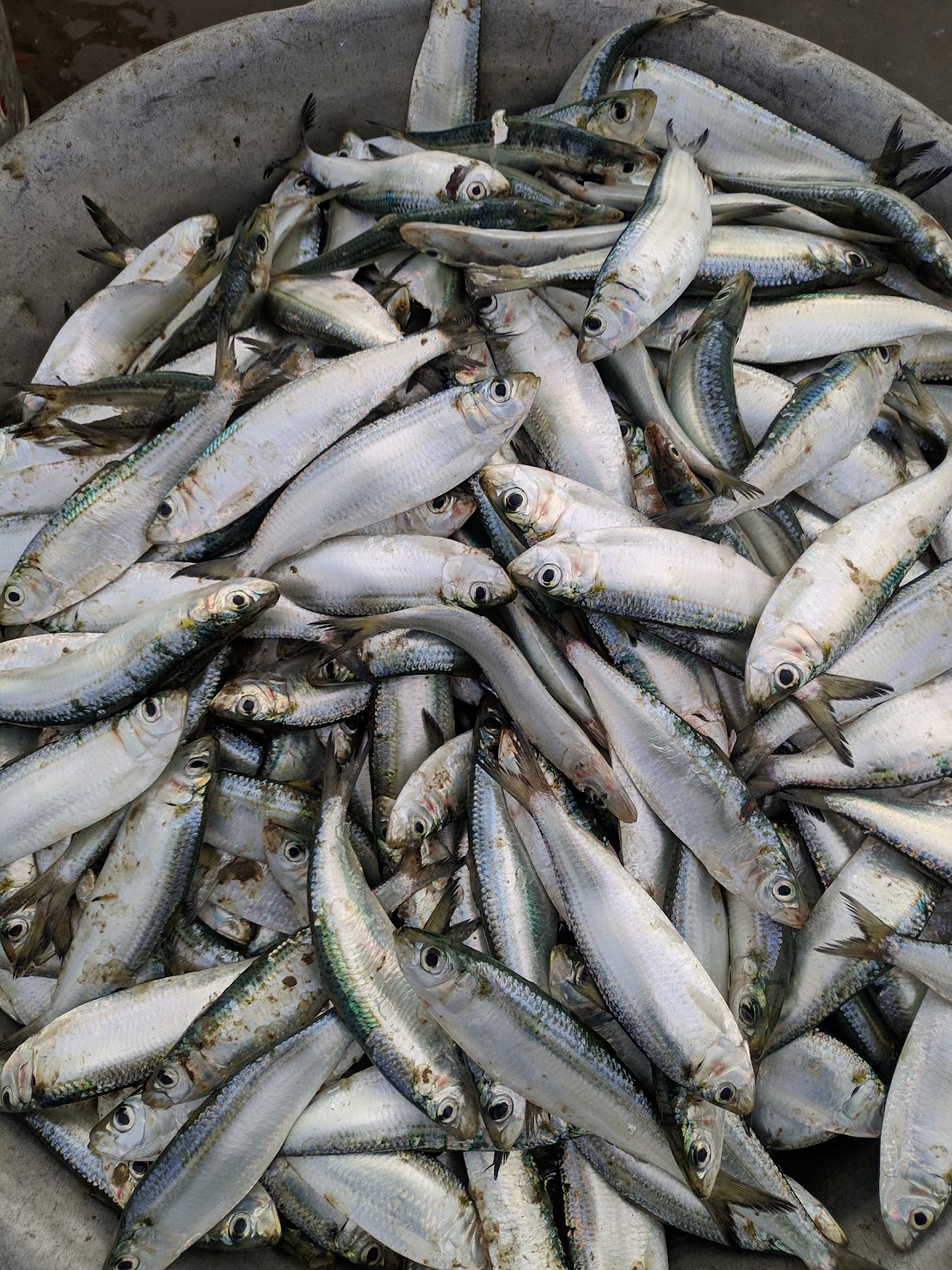 Other problems faced by fisherfolk

The Purse Seine Net (suruku valai) was banned in Tamil Nadu in 2000. The reason was that the use of this net, which is often customised to have very fine holes, led to the premature catching of a large number of juvenile fish. In traditional fishing methods, the fishermen say they would release back into the sea any fingerlings that may have been caught in the net. This directly helps preserve fish species, and also ensures that the fishermen’s catch in the future is not affected. But with the start of intensive fishing practices, the catch of traditional, small scale fishers gets affected, says a fisher from Pudukuppam. Fishermen from coastal villages in Cuddalore- including Pudukuppam- have been protesting for a thorough implementation of the ban on the use of such nets.

Apart from the difficulties discussed above, the fishermen now face the additional challenge posed by a captive port. A special purpose vehicle of the IL&FS group, Porto Novo Maritime Limited, has been entrusted with the task of constructing and operating this port, which is being built to handle 15 million tons per annum (MTPA) of coal. In its first phase, the port is being designed to handle 4.5 MTPA, construction for which began in mid-2018. 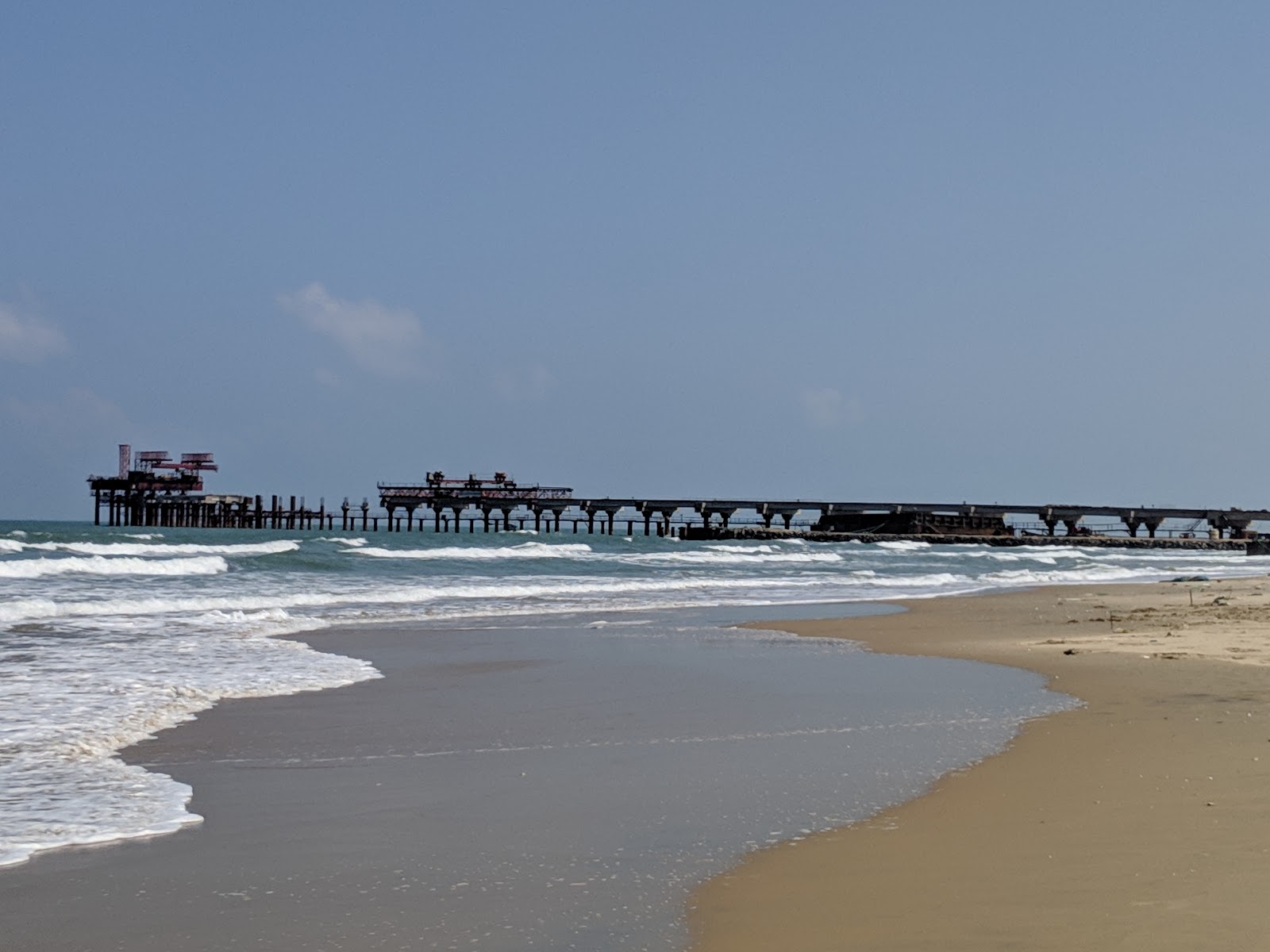 The port site also includes the place where fishermen traditionally dried their fishing nets, which is yet another loss to this community. Construction site debris and equipment may also get caught in fishing nets, causing damage. Prior to the plant construction, the men were fishing within a 2 km radius, incurring an average fuel expenditure of about Rs. 200 per trip. But now, the fishermen have to travel upto 10 km into the sea, consequently increasing their expenditure to as much as Rs. 500 per trip.

In calculating the berth requirements for 15 MTPA of coal, the EIA specifies that the port can handle 277 ship calls in a year. At an average of 23 ships a month, this will result in a lot of maritime activity, which can adversely impact marine biodiversity. And in the event of any accident, there could potentially be thousands of tonnes of coal contaminating the sea. These are the primary concerns of the fisherfolk and are yet to be addressed. With time, the fishermen fear that the port will be opened up to serve other industries as well, leading to more activity in the sea, further threatening their traditional right to the sea.

The stakes appear disproportionately high considering how precarious the fishing community’s existence already is. A sensitive ecological spot such as this is unlikely to sustain such an assault on it, without long term repercussions. This could be in the form of loss of livelihood, ill-health caused by a poisoned environment leading to fewer work days and higher medical expenses, and the poisoning and destruction of local resources. The apparent conclusion appears to be that the power plant will ultimately lend to the impoverishment of the local people than contribute to their prosperity.