Studies reveal that globally, five lakh people die every year due to cardiovascular diseases (CVDs) and in India, the number is pinned at 60,000 per year. Consumption of food rich in trans fat (vanaspathi, margarine, bread spreads, bakery shortenings, etc) is identified as one of the main reasons for CVDs. Intake of trans fat could lead to various other non-communicable diseases such as stroke, alzheimers, diabetes, infertility, etc. Recognising the seriousness of the issue, several countries have issued regulations banning/reducing trans fat in the food supply chain. In India, the regulations stand at 3% by weight in fats and oils from  January 2021 and it was 5% by weight till December 2020. The Food Safety and Standards Authority of India (FSSAI) has notified the regulations  to reduce it further down to 2% by 2022, a year ahead of the World Health Organisation’s (WHO’s) target.

CAG has been working with the Tamil Nadu Food Safety Department for implementation of trans fat regulations in Tamil Nadu. In addition to testing of oils and vanaspathi for trans fat content, CAG has been organising multi stakeholder meetings and developing IEC materials to spread awareness on the ill effects of trans fat. Recently, CAG conducted a survey in Tamil Nadu to understand public awareness about trans fat among key stakeholders, viz. doctors, food business operators such as bakery and hotel/restaurant owners/representatives, oil manufacturers/ representatives and consumers, who are responsible for the elimination of trans fat from the food supply chain. The survey questionnaire was titled ‘Understanding Trans fats - a Tamil Nadu focused multi-stakeholder study on usage, consumption, health implications, and laws.”  CAG has shared the findings of the study with the TN Food Safety Department and is planning on next steps to increase awareness and support the department in effective implementation of the regulations. 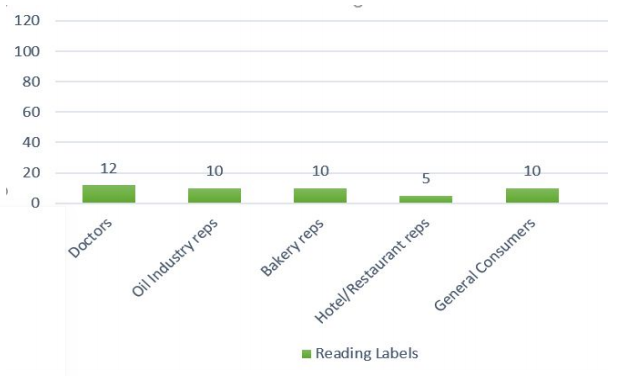 It was shocking to know that only around 12 per cent of participants, across all categories, look for nutritional information on labels. Only 27 per cent of consumers were aware about the trans fat laws.

In addition to the common questions, there were a few targeted questions asked to all participants. Few highlights:

Despite the increase in cardiovascular diseases and death rate, awareness among the stakeholders continues to remain low. It is important for all stakeholders to realise the ill effects of trans fat and work towards eliminating it from the food supply chain for better health.