In a thermal power plant (TPP), water is used for various purposes such as in the boiler, cooling system, and coal and ash handling systems, with the bulk of the quantity being used in the cooling system. As per Environment (Protection) Amendment Rules, 2017, notified by the Ministry of Environment Forest and Climate Change (MoEF&CC), all new plants installed after January 1, 2017, should not consume more than 3m3/MWh power produced. Though power production by coal burning is a water-intensive process, it can be optimised by conducting water audits. Excess water consumption leads to excess auxiliary power consumption because water and energy are dependent on each other; therefore an increase in consumption of auxiliary power results in a reduction in the efficiency of the power plant. Thus, efficient and optimal use of water should be made mandatory for the benefit of both environment and power plant.

Used water from these processes should be collected, treated and recycled in order to reduce raw water withdrawal from external sources (such as reservoir, river, irrigation channel, etc). The limit for water extraction is mentioned in the Consent to Operate (CTO) document issued by the respective state pollution control board for the plant. The plant has to comply with the limit granted in the CTO. Usually, the water limit is granted under three categories, viz domestic, process, and cooling. The cooling division consumes more water due to loss by evaporation in the cooling towers. Since the loss of water is unavoidable, condensed water should be appropriately recycled so as to minimize water used for cooling.

In the ash handling section, water is mixed with bottom ash before pumping it to the ash pond. This ash-water slurry in the ash pond will be fully immersed in water and the overflow of the water from the pond should be directed to the wastewater treatment plant and reused for other processes like coal heap wetting, roadways wetting, etc. The typical ash-to-water ratio for fly ash handling is 1:5 and for bottom ash is 1:8.

Apart from the above issues of excess usage of water, in comparison with other industries, often the Government itself grants water extraction limit (in the CTO) in excess of the prescribed limit. A typical example of this case was found with the CTO granted to Raichur Thermal Power Plant (1720 MW). Water Consumption pattern for the year 2016-17 was compared with the data from CTO (granted for the 5 year period 2016-21) and the actual quantity of water to be permitted under MoEF&CC, 2015 Notification. According to this amendment, the water consumption should be reduced to 3.5m3/MWh within two years of this notification. Considering this, the 2016-17 data of the plant was studied. The graph below depicts the comparison between water consumption limit under CTO, water permitted as per the MoEF&CC rule, and actual water consumed by the power plant in that year. 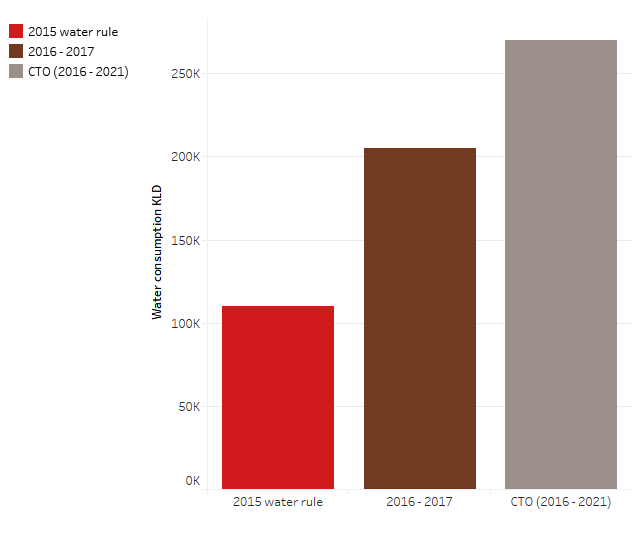 The above case portrays the lax monitoring of water consumption. The granting authority should carry out a thorough study of the area around the plant which should include a water table assessment of the area before setting water quantity limits. It is important that authorities are stringent about forming norms, rules, and guidelines that direct water consumption and make the process as efficient as possible.

A report by WRI, states that “more than 70 percent of India’s existing thermal utilities are likely to experience an increased level of water competition from agricultural, urban, and other industrial demands by 2030”. Considering this and the lackadaisical approach by the authorities, the water situation in India will definitely be under serious crisis. This water crisis will also lead to, among other things, power outages which will impact the economy of the country.

Corrections: The previous version of this article did not factor in PLF while calculating actual water to be consumed in this power plant. The graph has been revised based on the PLF.