Electricity consumer cells (ECCs) are an initiative by the Citizen consumer and civic Action Group (CAG) in seven districts of Tamil Nadu namely, Tiruvallur, Cuddalore, Tirunelveli, Salem, Tiruvannamalai, Tiruchirapalli, and Vellore. Generally, all the seven Electricity Consumer Cells (ECCs) used to conduct physical outreach meetings twice in a month in their respective districts. These meetings were held to sensitise consumers about the ECCs and help them by clarifying their queries related to electricity problems. Consumers register electricity related complaints with ECCs during the meetings. Based on the complaint, the ECC Advisors advise them about the procedures and/or resolve it by taking it up with the TANGEDCO officials.

From April, 2020 due to the COVID-19 pandemic situation, ECCs have been unable to conduct outreach meetings physically in their respective districts. Alternatively, they reach out to electricity consumers through e-outreach meetings, which are conducted through  digital platforms like Google Meet, and Zoom.  24 e-outreach meeting were totally conducted between the month of June to September

Amidst COVID-19, ECCs conducted 24 e-outreach meetings between October and December, 2020.

ECC coordinators explained the importance of conducting outreach meetings, which are to discuss electricity-related issues and to create awareness on energy conservation, energy efficiency, and renewable energy. They explained how the ECCs reached out to TANGEDCO officials for resolving consumer complaints during this pandemic situation. People from different consumer categories such as domestic, agricultural, commercial, participated in the meetings. 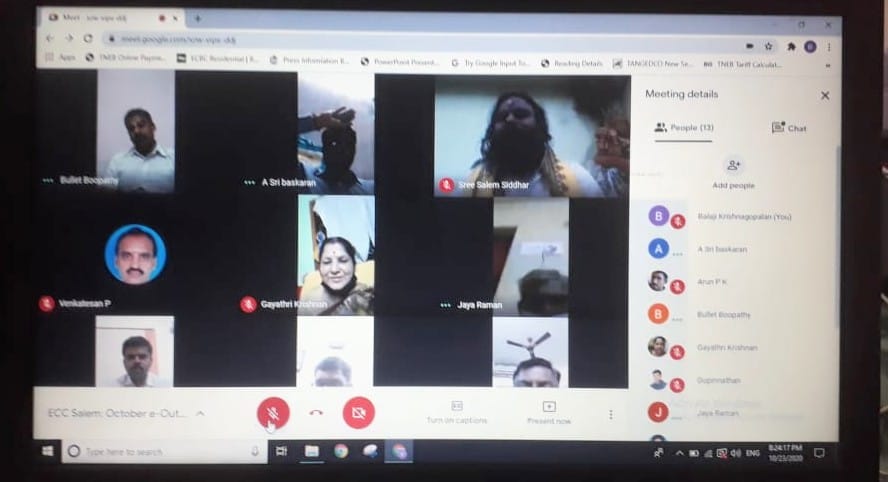 The ECC engineers made presentations on renewable energy, especially rooftop solar. The solar developers who were invited as part of the ECC e-outreach meeting explained about the installation process of the solar panels in the premises.

In the third part of the outreach meeting, ECC Advisors explained about the consumer complaints redressal mechanism. They also spoke about some common issues like name transfer, how to get new agriculture connections etc. during these meetings.

Some of the queries raised by consumers during the E-Outreach meetings:

The ECCs have continued to work and support consumers during the pandemic without interruption in operations. ECCs have adapted themselves to collecting complaints through different modes of advertisement and delivering advice and solving their electricity related issues even over the pandemic.