To remember the many precious lives killed & injured in #TamilNadu's roads & to commend the efforts taken by the state consistently to promote #RoadSafety, CAG are organised an event titled “Tamil Nadu’s MARCH towards Vision ZERO”. In collaboration with the School of Excellence in Law & Greater Chennai Traffic Police on 22nd November 2022.

CAG, in collaboration with the District Administration of Tirunelveli, organised a training workshop for the District Road Safety Committee members on 15.10.2022. The workshop discussed global best practices, traffic safety evaluation, and Intelligent Transport Systems. The event was followed by a media workshop wherein journalists were sensitized to cover road crashes more effectively.

CAG in collaboration with  Consumer Rights Movement, Salem conducted a regional media workshop in Salem on 25.09.2022. The workshop had over 30 media personnel participating, who discussed the need to implement MVAA 2019, strengthen road safety enforcement, and the role of media in road crash investigations.

Citizen Consumer and civic Action Group (CAG) organised a discussion on the “Residential Rooftop Solar Experience in Tamil Nadu: The Prosumer Perspective”, at Madras Management Association (MMA), Chennai on September 3, 2022. The objective of the programme was to bring together residential prosumers to discuss the issues faced while installing Residential Rooftop Solar Photovoltaic (PV) and to brainstorm possible solutions. Mr K. Vishnu Mohan Rao, Senior Researcher, CAG gave an introduction to the activities of the Electricity Governance team in CAG and explained the purpose of conducting the discussion. He welcomed the participants and gave an overview of the event. 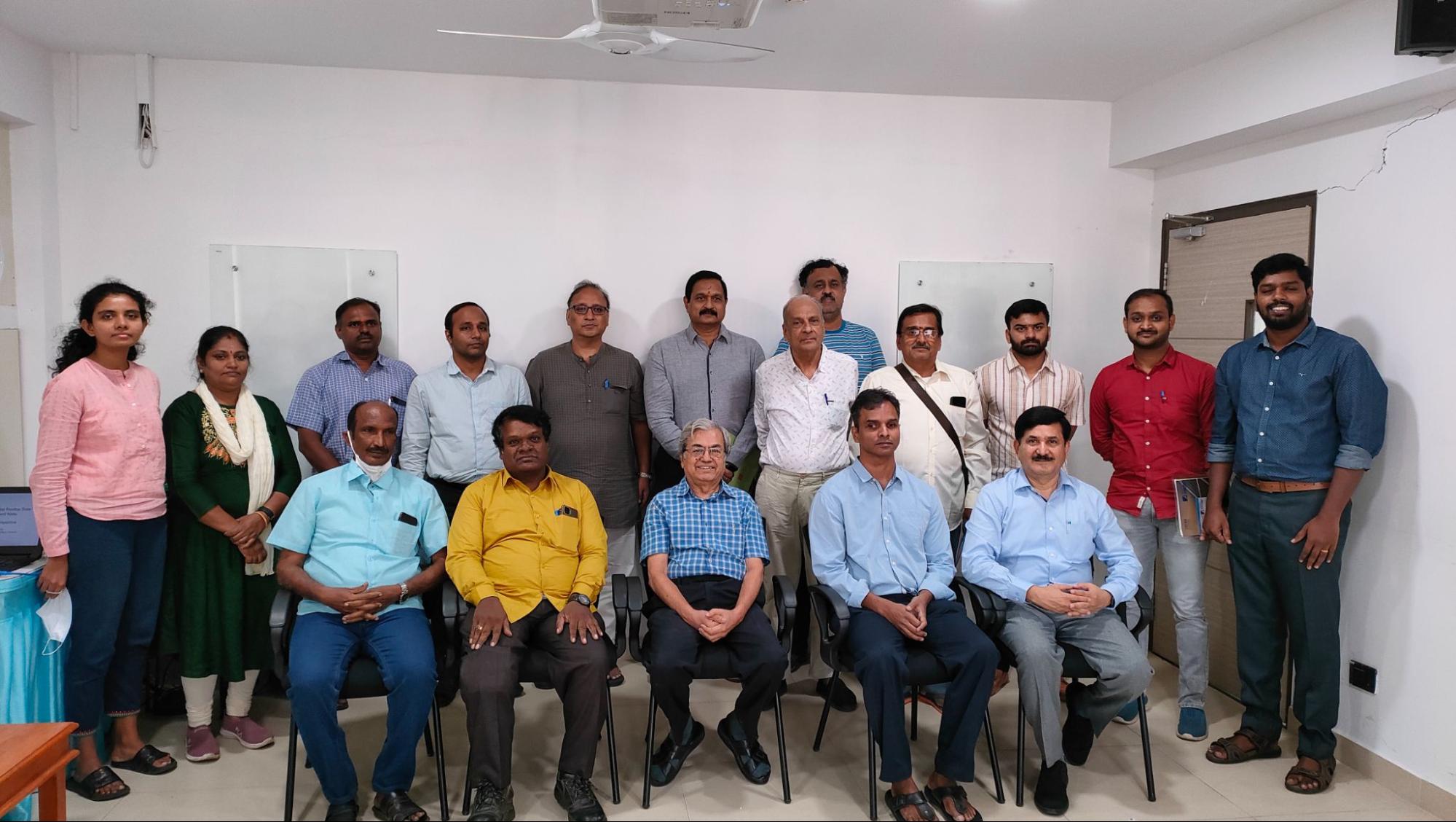 A total of sixteen prosumers participated in the discussion.

The meeting was inaugurated by Group Captain Vijaykumar (Retd.), Director, Madras Management Association (MMA). He shared his personal experience of installing solar systems in his home and the need for knowledge building within this sector.

The moderator of the meeting Mr D. Suresh, also known as Solar Suresh, opened the discussion explaining the benefits of the installations such as being unaffected by increasing tariffs and having uninterrupted power supply. He also briefly outlined some of the issues that prosumers face during installation and post-installation.

The following points were discussed by the prosumers:

The floor opened with a prosumer’s doubts regarding switching off the battery every night.  The moderator and CAG members clarified that the battery can be kept running through the night and that this does not affect the life of the battery.

The benefits of switching from acid batteries to lithium-ion batteries (which come with around a 25-year warranty) were also discussed.

The importance of the rooftop structure and bolting of panels was discussed with respect to concerns regarding storms. Mr Suresh stated that his own rooftop system had withstood cyclones like Varadah. He explained that there must be some gaps in the structure to allow free airflow.

There was also a query regarding the method of automating switching between on-grid and off-grid. The discussion indicated that there is currently no clarity on this and that further study is required on the same.

One prosumer described a prolonged struggle to get a net meter from the utility. Instead of a bidirectional meter,  he was given a unidirectional meter.  This issue has not been resolved even after three months of phone calls, visits and letters to the concerned officials. Meanwhile, he has also been paying consumption charges based on his old consumption pattern. He explained that the process of procuring a net meter needs to be made more transparent.

Most of the prosumers were curious about the net-metering mechanism and wanted more clarity on how it works. The discussion indicated that there are limited field personnel who also frequently switch roles, resulting in a lack of understanding as to how meters are read.  Some prosumers stated that taking pictures of meter readings every month was a good precaution. The new rates for feed-in tariffs were also discussed.

The general consensus was that the introduction of network charges has made it more expensive to have a grid-connected solar plant. Prosumers who did not have consumption charges are now compelled to pay this added expense.

The utility has not created a prosumer portal to show the export and import of power with the corresponding charges. This is necessary to ensure transparency in data and allow prosumers to check their consumption akin to the utility consumer portal.

In the city, prosumers observed that utility staff were reluctant to learn or support an interested party in installation.  There is a pressing need to sensitise them and ensure that the department functions as a  prosumer-friendly entity.

There was a discussion on the need for a platform to provide reviews and how this could address difficulties in choosing a reliable developer. For example, one developer had failed to provide a proper inverter to the prosumer. Prosumers also opined that creating a basic checklist can arm a prosumer with the information he/she needs to check the developer’s work.  CAG’s rooftop solar installation guide for Tamil Nadu helps bridge this gap.

Another prosumer had a query regarding frequent low voltage, with the problem persisting even after checking the connection given by TANGEDCO officials. It was discussed that changing the setting on their inverter can fix this issue; and that this should have been tested by the developer during installation. 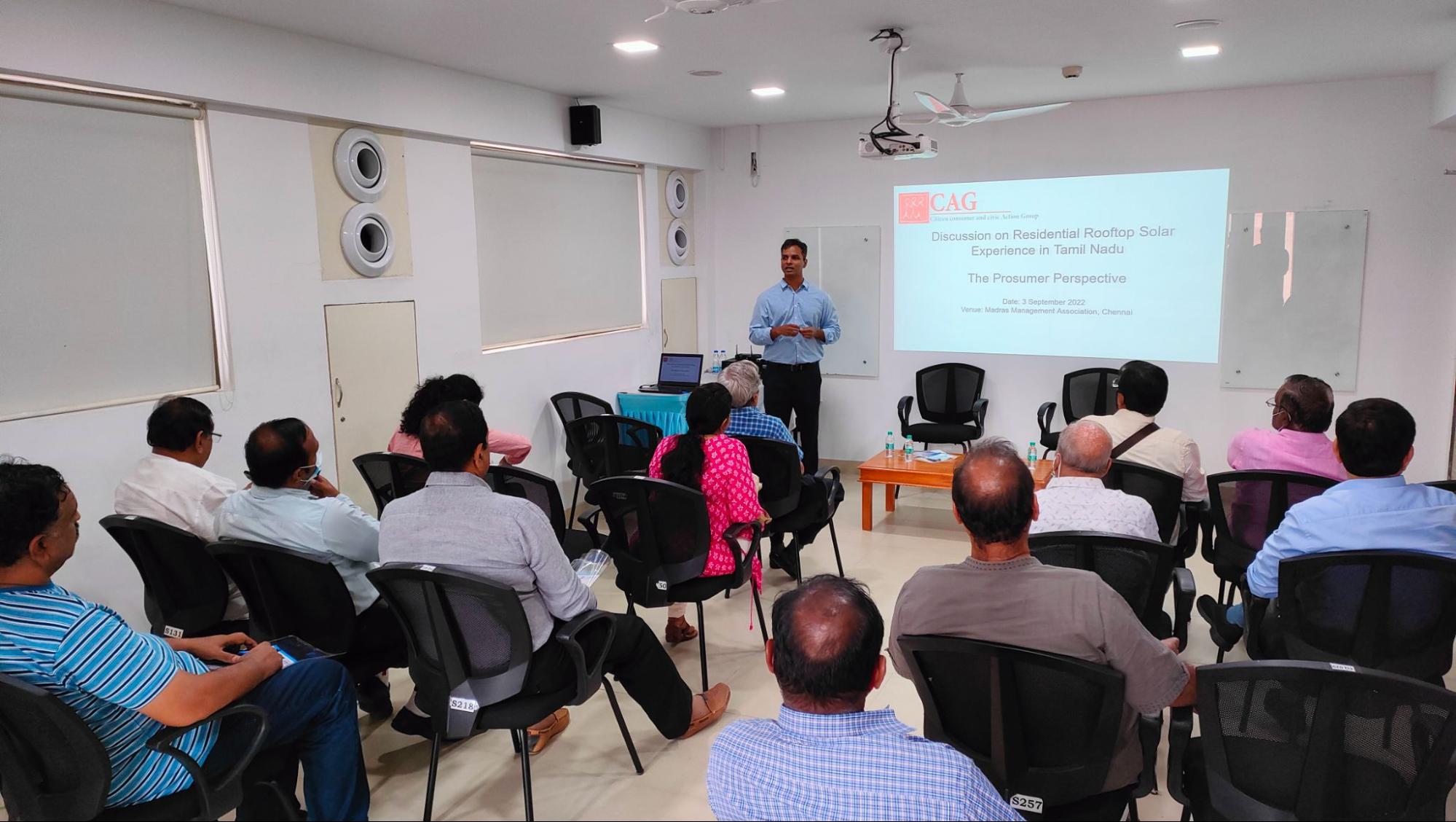 There is a lot of confusion regarding subsidies provided by the Government. Tamil Nadu Energy Development Agency (TEDA) has to create a consumer-friendly process for citizens to get these subsidies.

The rise of electric vehicles and the need for charging infrastructure that can integrate with solar plants were also discussed.

A subscription model for people who do not have the space or finance to set up their own plant to get solar “biscuits” as done by a start-up in Bangalore was also discussed. This is a great way to provide access to renewable energy to more citizens.

Rooftop solar is still not mainstream because of the complexity that surrounds it; this was elucidated by the various hurdles each prosumer faced during installation. Another important area of discussion was regarding the use of solar in apartment complexes. One of the prosumers installed a rooftop solar plant for common services and was now convincing apartment owners in his apartment to install the same for everyday use. He shared his experience in dealing with the initial scepticism among residents to invest in the plant. He overcame this by explaining and showing the money saved in electricity bills by each flat owner.

Using renewable energy and promoting the same by helping other people to install residential solar rooftops is the best way to battle climate change and the energy crisis.

Towards the end of the meeting, the prosumers discussed the functioning,  role and objectives of the forum. This forum is for prosumers to share knowledge, discuss issues and ways to resolve them, clarify any doubts, information on new technological advancements, and share updates on policy dealing with residential rooftop solar and any new developments in the field. CAG offered to represent issues on behalf of prosumers to regulator, utility and policymakers as and when required. All the prosumers agreed to create a social media group to engage in such discussions.

The workshop aimed at sharing knowledge of global best practices on road safety emphasising the need for robust road safety legislation, increased penalties to act as deterrents and leveraging the use of technology for improved enforcement.

The second National Pedestrian Conference organized by SUM Net India in Chennai brought together pedestrian voices, in an effort to create and implement walker-friendly roads and spaces. The event was held on the 11th and 12th of March, 2022 with a keynote address by Ms. Santha Sheela Nair, IAS (retd.).

CAG, in collaboration with Tamil Nadu Small and Tiny Industry Association (TANSTIA), organized a discussion with manufacturers of processed foods in Tamil Nadu on the 8th of March 2022.

A discussion on the existing urban policy framework, Chennai's second master plan, and the proposed third master plan with Prof. A. Srivathsan and Ms. Aswathy Dilip on March 7th, 2022.

Competition in power markets enhances efficiency in the sector, while bringing in additional finance and capital to strengthen the sector. Consumers are provided with greater choices in service providers and business models such as Opex and open access as per their energy requirements, load patterns and economic and financial considerations. This has also led to a greater number of players in the market which makes it more competitive, increases choices for the consumer and widens the scale of deployment of such solutions.

As Tamil Nadu embarks on this journey of strengthening the electricity sector by promoting competition in the sector and introducing new business models, the ‘Citizen consumer and Civic Action Group (CAG)’ in collaboration with MP Ensystems Advisory Pvt. Ltd organized a webinar to discuss the considerations, implications and relevance of ‘Electricity Sector Competition’.

Due to these issues, there is a need to bring in efficient private players, Delhi being a good example.