CAG, represented by S. Saroja, has been elected to the CI Council in the General Assembly held in Estoril, Portugal in May 2019. Saroja was the consensus candidate from India, which has a representation of 8 full members in CI. CI is headquartered in London and is the world federation of consumer groups that serves as the only independent and authoritative global voice for consumers, having over 240 member organisations in 120 countries. In addition to the President, around 15 members from across various regions are elected to the council who will serve a term of four years.

The General Assembly was held following a three days’ summit, which happens once every four years. The summit brought together leaders/representatives from diverse fields, across the world - consumer groups, government, businesses, civil society, academia  - to exchange ideas, to understand and share important consumer issues happening in the world and discuss collaboration opportunities. 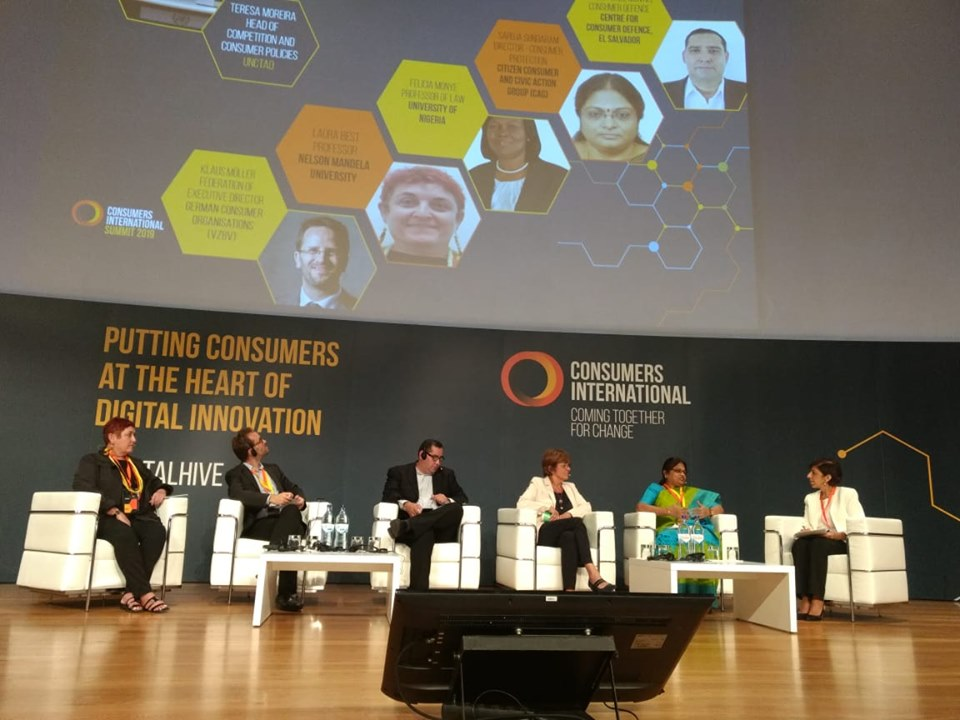 Above: S. Saroja in the CI Council

The event was centered around putting consumers at the heart of digital innovation. The summit explored not only core digital issues of privacy, access and data, but also new technologies such as artificial intelligence, robotics and the Internet of Things and how digitalisation will help or hinder achieving core consumer rights in food, finance, energy systems, sustainable development goals, and action on protection and redress. In addition, there were sessions on e-commerce, online scams, sustainable consumption, financial services, product safety, sustainable food systems, collective redress, consumers’ access to nutritious diet and so on.

S. Saroja was part of the plenary session on “Key Challenges in Consumer Protection”. The Deputy Secretary General of the United Nations Conference on Trade and Development (UNCTAD) was the keynote speaker and, the Head of Consumer and Competition Policy, UNCTAD was the moderator at the session. Other panellists included representatives from the Federation of German Consumer Organisations, Nelson Mandela University, University of Nigeria, Centre for Consumer Defence, El Salvador. The panel discussed new and challenging issues in consumer protection such as peer-to-peer markets, cross border transactions and vulnerability and the role of consumer law in protecting and empowering consumers.