Carbon Accounting - too good to be true.

Since time immemorial, advertisements have misled humanity more often than not. Right from fairness creams which claim to magically transform a dusky complexioned girl into someone who has  flawless fair skin, to carbonated cool drinks which make the person drinking it perform impossible daredevil stunts, most advertisements have tricked the consumers into  believing in the concept of idealism by playing with their emotions. The same strategy holds good to a certain extent when it comes to carbon accounting. At the outset, people assume that it is a commitment to reduce and be accountable for their carbon footprint. But does carbon accounting actually facilitate the reduction of carbon emissions? Let us analyse the modus operandi of the big polluters in incorporating carbon accounting in their business practices.

Carbon accounting basically provides us with tools to quantify the amount of carbon dioxide and  other greenhouse gases that a person or entity emits into the atmosphere. It also helps to make informed choices regarding mitigation strategies. Theoretically, it seems like we are on the right path. Yes, everyone needs to keep track of their carbon footprint, no questioning that. But it is the second part of the definition that needs an in-depth analysis. When it comes to mitigation strategies, the terms “carbon offset”, “carbon  credit”, “carbon neutral” and “net-zero” are widely used. What people fail to understand in the use of all these jargons is that the majority of carbon accounting procedures followed by the big polluters are not based on changing business practices, Instead,  they concentrate on purchasing carbon offsets to counteract a large chunk of their emission and then claim themselves to be carbon neutral. This methodology is often controversial in nature and the extent to which it really addresses the core problem of climate change is highly questionable.

Since the Paris Agreement in 2015, it has become a trend for corporations to advertise that they are carbon neutral.  When a big corporation purchases an offset, it ideally means that it is investing in environmental projects somewhere around the world. This could be on projects related to solar power generation, reforestation projects or simply flaring methane releases in landfills. But only when we get to the fine print of these offsets do we realise that they are contentious. Unfortunately the purchase of offsets acts as a marketing gimmick for companies that ends up providing cover for their fuel emissions while they are still continuing with their climate-harming business as usual.

There have also been instances where both companies and stakeholders have been deceived under the pretext of certain carbon offset projects. To quote a few; in 2014 there was an article in The Guardian, about how a carbon offset scheme was complicit in a genocidal land grab in Kenya. Around 15000 Sengwer indigenous people were forcibly evicted from their ancestral homes and their houses were torched in the name of forest conservation and reforestation. In another instance, a 2019 investigation by ProPublica reported that a Brazilian forest-based carbon credit project that sold credits to US and European corporations did not deliver what it promised and was a massive failure. The project which aimed to restrict deforestation, sold around 250,000 carbon credits but soon after, it was claimed that the loggers cut down more trees than the sum total of the credits sold. Even more recently, one of the world’s largest publicly traded international oil and gas company was sued for misleading investors. It was alleged that the company engaged in deceptive advertising to consumers and was involved in greenwashing campaigns that portrayed the company as a clean energy innovator.

When it comes to purchasing carbon offsets, it is very difficult to ascertain the genuineness of the project and whether the money invested is being used for the purpose intended. Carbon offset merely acts as a band-aid while allowing the root cause to exist. Most corporations just  invest in offsets for a cleaner conscience. It does not address the core problem related to climate change. Looking at the track record of fossil fuel industries, we know better than to take its word on climate related policies for granted. This is articulately explained by Canadian author and  climate activist, Naomi Klien, in her book “This changes everything” where she says that when a company purchases a carbon offset to justify their carbon emissions, it really does not  help the cause. She puts it as “One step forward, one step backward. At best we are running in place”. 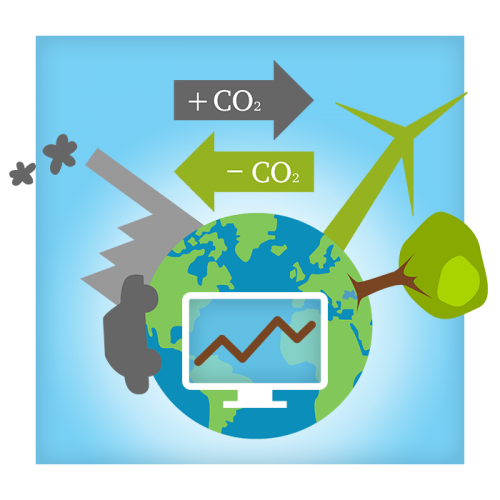 To summarize, the concept of carbon accounting is flawed and should be contested because the actual practice of how organisations account for and report emissions remains understudied. There seem to be practical issues in implementing abstract accounting schemes due to the socially constructed character of carbon conversion factors. There needs to be an independent and uniform regulation that is based on science if we have to make carbon accountancy trustworthy and devoid of carbon deceptions.

We only have one earth. Its resources are fragile and finite. Nature does not give us a second chance. So individuals, corporations and governments must work in tandem to avert the impending climate crisis instead of relying on skewed carbon accounting tricks. The main emphasis going forward should be on reducing carbon emissions and actively seeking clean energy alternatives, if we seriously plan to combat climate change and limit global warming to 1.5 °C by mid-century.