The Intergovernmental Panel on Climate Change (IPCC) special report “Global Warming of 1.5°C” concluded that limiting the temperature increase to 1.5°C would require a reduction of carbon dioxide (CO2) emission by about 45% from 2010 levels. It recommends reaching this target by 2030 and then a subsequent net zero target by around 2050. Emissions Gap Report 2019 (EGR-2019) of the United Nations Environment Programme (UNEP) mentions that G20 countries are accountable for 78% of the total greenhouse gas (GHG) emissions as of November 2019. G20 nations thus have a greater role in determining  the extent to which the 2030 emission gaps can be closed. EGR-2019 further mentions that phase out of coal-fired power plants alone has annual GHG reduction potential of 4 gigatonnes of CO2 by 2050; just this would be about 13.1% of 2010 total emission levels. Contrary to their plan of phasing out fossil fuels agreed upon in 2009, G20 countries have continued to finance coal-fired power plants, mostly abroad. In October 2019, the Bank of England’s  governor, Mark Carney remarked that the global financial system is financing activities and industries that can ramp up the global temperature by more than 4°C and that financing worth USD 85 trillion had already been secured by carbon intensive industries. Coal mining, coal based power generation and transmission industries are part of this category that is ramping up global temperatures by release of GHGs. Thus, continued financial support to these industries is a great obstacle to arresting the global temperature rise.

India is the fourth largest emitter of GHGs and a member of the G20 group. India’s coal consumption for coal-fired power plants has more than doubled in the last 15 years (figure 1). CO2 emissions estimate from coal based electricity production has risen by 1.8 times in the ten year period between 2005 to 2015 (figure 2). In India, coal mining and coal based power generation and transmission have traditionally been public enterprises funded and operated by the state (central and state governments). Out of 198 gigawatt (GW) of installed capacity of coal-fired power plants in India (as on 31 October 2019), 62.5% is owned and operated by the state. Thus, it is imperative to know the source of financing of these public entities that are one of the biggest contributors to GHG emissions.

In this article, we will look at the following to get a sense of the involvement of public money in coal mining and coal based power generation and transmission: 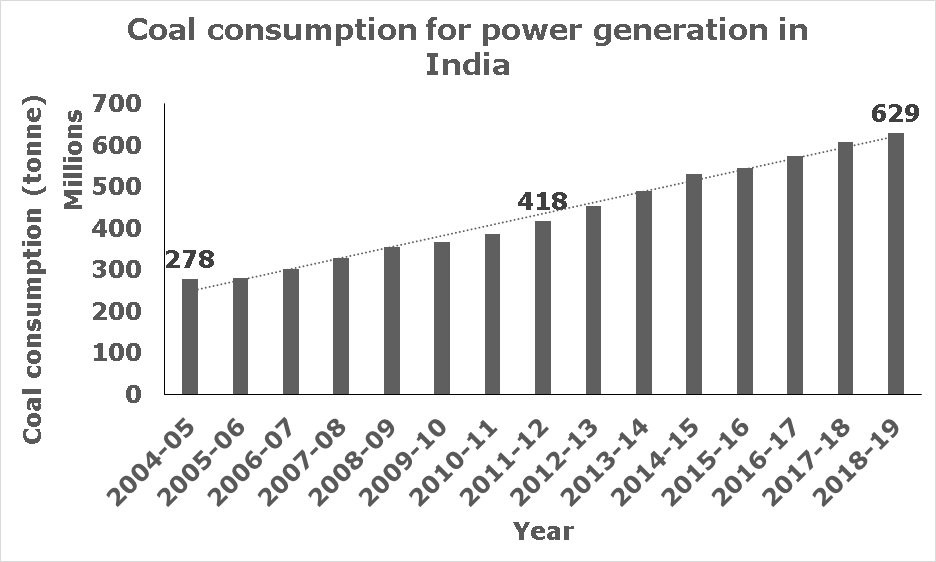 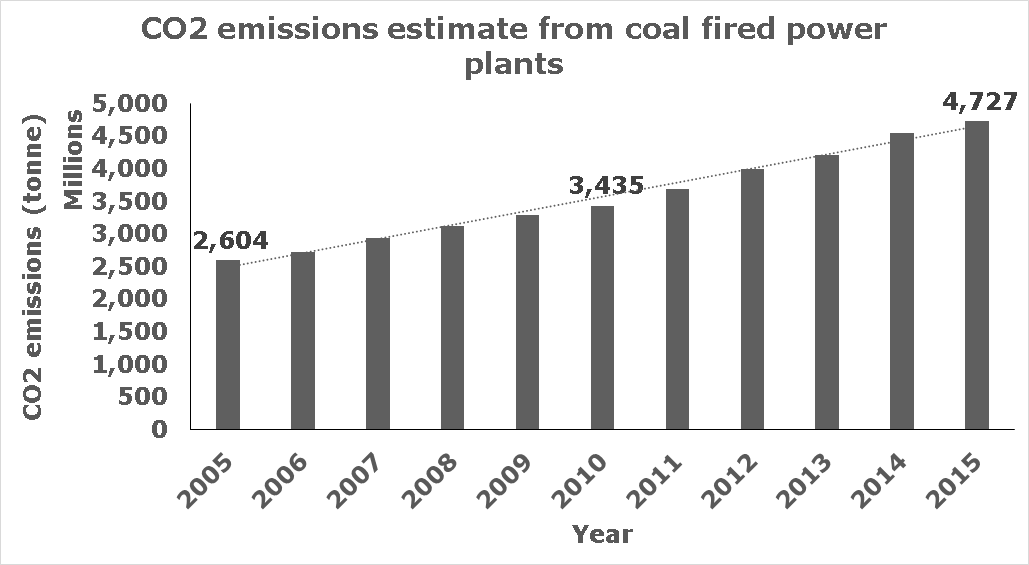 The majority of coal-fired power plants in India use domestic coal as a fuel source, and Coal India Limited (CIL) until August 2019 had monopolistic rights of mining and supply of coal in India. While GoI holds a 71% stake in CIL, LIC India is the second largest shareholder with a 10.94% stake out of 12.2% owned by insurance companies. State Bank of India (SBI), the largest public sector bank in India, has the highest stake among banks at 0.37% out of total 0.53% owned by banks. This coal giant built from money we pay as tax to the government, insurance premiums to insurance companies, and deposits in public sector banks, features in the list of 20 biggest polluters in the world responsible for a third of global carbon emissions. 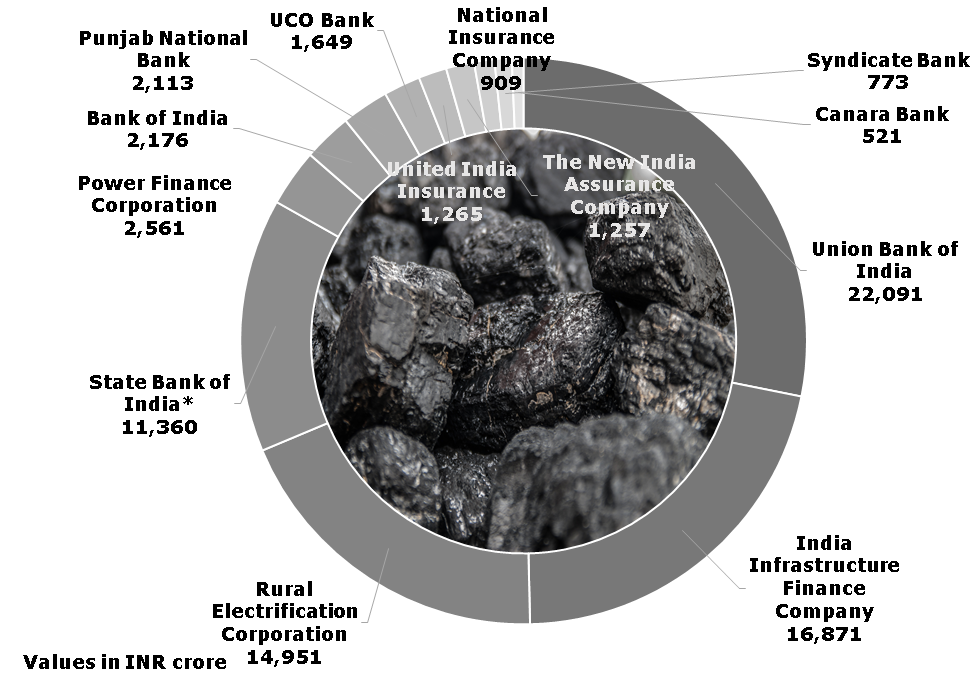 Figure 3: Banks and insurance companies having investments in coal mining, coal based power generation and transmission industries in India, 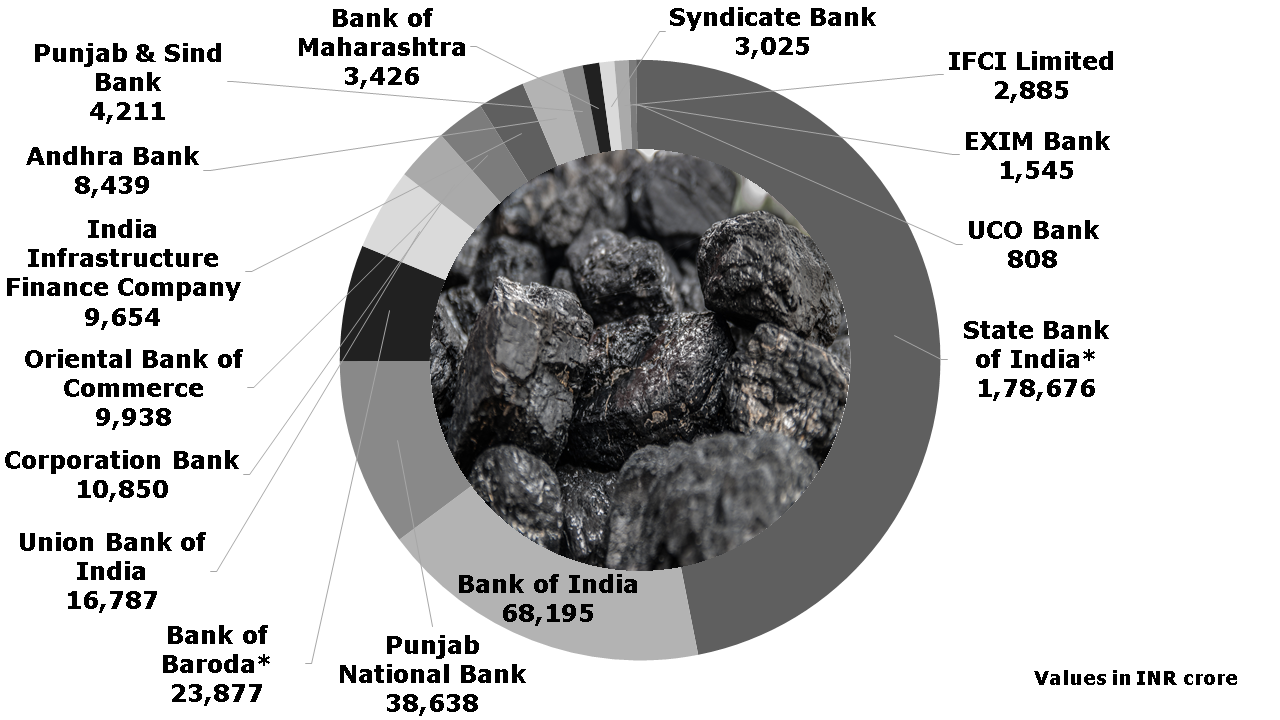 *Bank of Baroda and State Bank of India figures are from their Basel III public disclosures.

Most of these public sector banks that lend money to coal mining, coal based power production and transmission companies, have an asset liability mismatch. This is because the banks have money (liability) deposited by the Indian public as term deposits on a short term basis as compared to the money (asset) lent by banks to companies on a long term basis. Indian coal based power production sector is plagued by issues relating to changes in the regulatory framework, power demand, coal price fluctuations, competition from lower tariffs of renewable energy, and cost overruns due to land acquisition delays and environmental concerns. Delayed payments by the power distribution companies (discoms) further stress the finances of the coal based power production and transmission companies, which ultimately leads to the latter’s delay in loan repayments to banks. Any loan, including its principle and interest, when not paid in a timely manner results is an NPA. According to the Reserve  Bank of India (RBI), the current timeline for declaration of NPA is when payment is overdue for 90 days. As per available data, five public sector banks have declared NPAs that are above ₹500 crore in coal mining, coal based power generation and transmission industries (figure 5). Most of the banks denied having information about their NPAs in coal mining, coal based power generation and transmission companies. 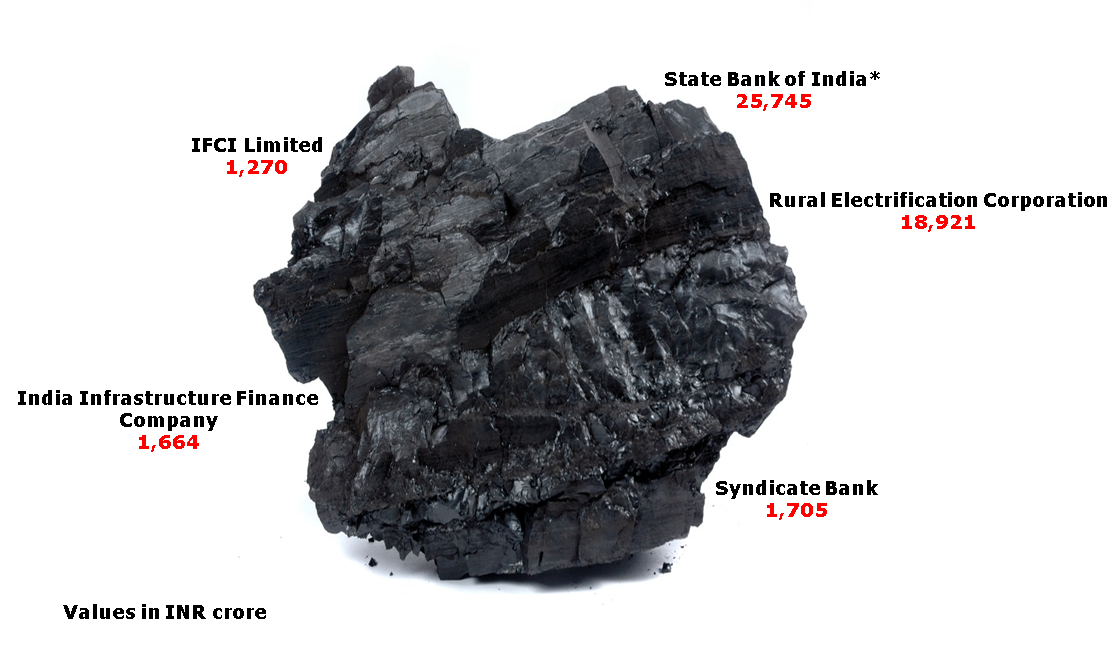 Figure 5: Public sector banks having NPAs in coal mining, coal based power generation and transmission industries in India, as on March 31, 2019.

NPAs above ₹500 crore only shown. *State Bank of India figure is from its Basel III public disclosure.

Coal photo by Kate Galloway is licensed under CC BY-SA

Latest research by BankTrack, Urgewald, and other partner NGOs has revealed that globally, Japanese banks have directly lent to 32% of all new coal power projects since 2017, followed by European banks that have directly lent to 26% of all new coal based power projects. Since 2017, SBI has directly lent ₹30,008 crore globally and is sixth in this global list of top 30 dirty lenders topped by Japanese and European banks. A total of ₹11,29,561 crore has been provided by 307 commercial banks as direct loans to coal based power plant projects globally.

Each new coal based power plant is a great stumbling block to our path of limiting the temperature increase to 1.5°C. While continued national and international  financing of coal is disappointing, isolated reports of few pension funds, insurers, and banks pledging to stop further investments or lending to coal is trickling in. This however is not enough to turn the tide against global temperature rise. Banking on Climate Change by BankTrack has tracked 33 banks that have collectively financed ₹1,35,76,050 crore to the entire fossil fuel industry since the Paris Agreement. However, in a tiny ray of hope, the same report reveals that 21 out of these 33 banks have partially restricted coal financing. In India, seven public financial institutions have invested ₹500 crore or more in the renewable energy sector (figure 6). Indian public sector banks and insurers have mentioned in their RTI responses that their coal divestment path will be that as directed by profits and the Indian government, and most have not set any timeline for divestment. This indicates the continued pursuit of short term financial profits without any consideration for the long term environmental costs, and is a great dampener for the renewable energy industry in India. 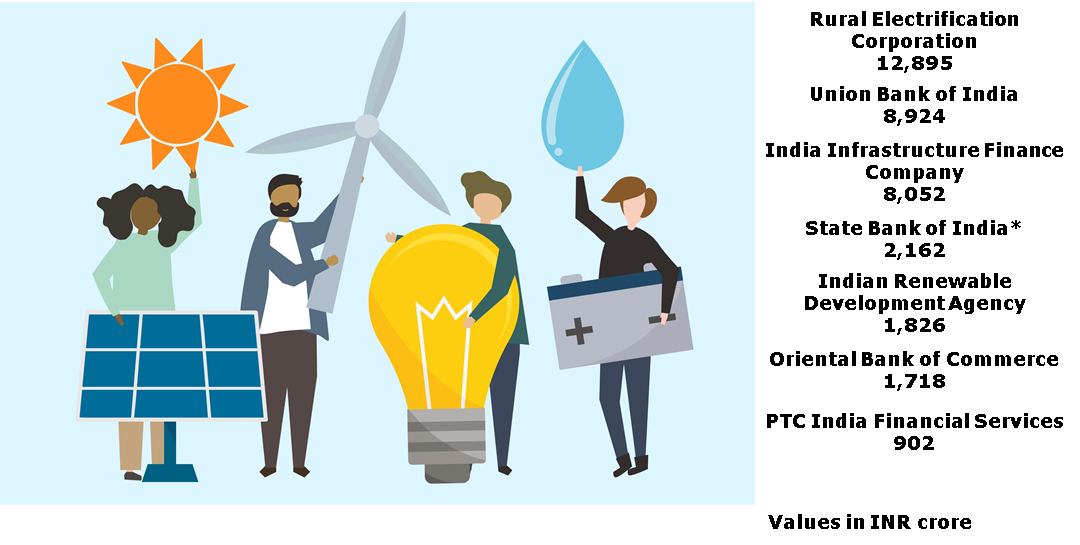 Figure 6: Public sector banks having investments in renewable energy industries in India, as on March 31, 2019.

Investments above ₹500 crore only shown. *State Bank of India figure is from CFA’s report and as on December 31, 2018.

In conclusion, India’s addiction to coal that is largely sponsored using money from public taxes and deposits in banks, is not showing any signs of slowdown even four years after signing the Paris Agreement. India’s continued reliance on coal and the current global trends in terms of financing of fossil fuel industries are pointing towards a rise above 4°C in global temperature within this century. EGR-2019 shows that for India, the most important step towards a zero carbon future is the phase out of coal based power plants that further expands to other industries that are carbon intensive. Financing for renewable energy will see a boost with regulatory and policy support from the central and state governments as the public sector banks and insurers are still averse to investing big in this sector. As a society, we need to come up with new ways in which to exert influence over how our money in banks and our insurance premiums are utilised by the respective financial institutions. With the cost of renewables fast reducing in the global energy market and output expected to match up to that of coal based power production within the next 5 years, it makes economic sense to reject coal starting yesterday. Considering that air pollution from coal based power plants impacts more lives in India since the plants are situated closer to populated areas, there is evidence that more lives can be saved by shifting to renewable energy and rejecting coal. For the period between 1996 to 2014, this study concludes that an increase of 1 GW of coal-fired power generation capacity in India increased infant mortality rate by 15% in districts near coal-fired power plants as compared to those that are away. While the healthcare cost data for India is not available, use of coal in the United States of America (USA) had healthcare cost estimate between USD 350 billion to USD 880 billion per year, that is up to 6% of the US GDP (as of 2015). A life reliant on  coal has to end, for life on Earth to thrive. Public sector banks and insurers could use this as a starting point to embark on Environmental, Social and Governance (ESG) investing in India and lead the way to a coal free future.