Pedestrians set to reclaim the streets

Go to any road or street in any of the rush hour Indian metropolises, there is an ubiquitous scene playing on these roads—encroached footpaths forcing pedestrians to walk on the streets. When pedestrians are forced to walk on the streets that are filled with motorists with poor road discipline and lack of awareness that pedestrians have the right of way, it’s a dangerous combination. But what have been the costs of this precarious situation that has been playing out on our roads every single day? The most vulnerable occupants of the road— pedestrians are killed at the rate of 25,000 plus every year.

Surging pedestrian fatalities and the need for intervention

According to the statistics of the Ministry of Road Transport and Highways, the number of pedestrian deaths was 13,894 in 2015, but in 2019 these numbers rose to 25,858 - close to a 100 per cent rise. Walking infrastructure is inadequate and even non-existent in most of the Indian cities and that has directly contributed to this steady growth in pedestrian fatalities. With the unprecedented growth of Indian cities, economic prosperity and a resultant surge in vehicle ownership, these numbers are bound to increase unless an active intervention is made. It is not holistic, if we were to consider pedestrian issues as something concerning road safety only. As per the 2011 Census, one third of all work trips in India are made by foot and data shows that women tend to walk more than men. According to the National Statistical Organisation (NSO) 60 percent of children walk to school, which implies that walking access and pedestrian safety is a larger socio economic issue, which has a direct impact on gender equity and rights of minors and right to education. 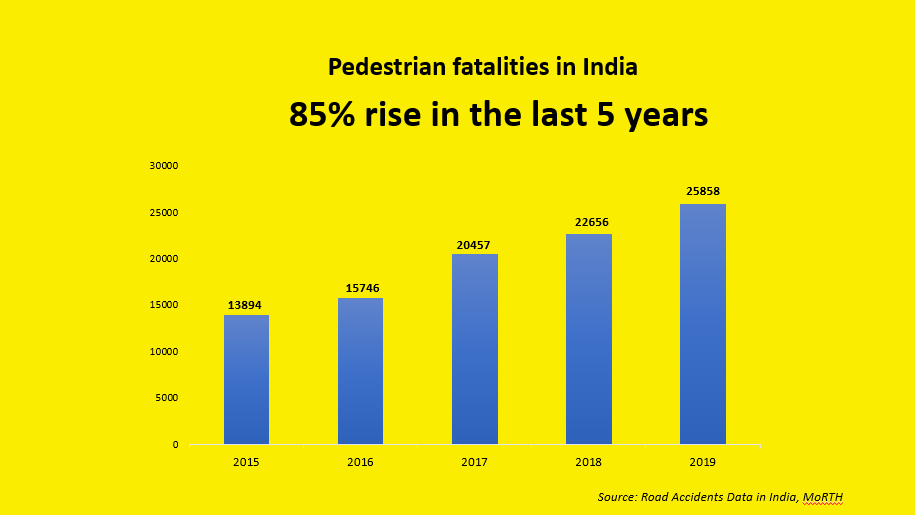 Taking into account these larger socio-economic consequences, Sustainable Urban Mobility Network (SUM Net) India, a national coalition of NGOs, including the Citizen consumer and civic Action Group (CAG), which works to make our urban transportation systems safe, accessible and environmental friendly, launched a nationwide campaign on October 11 to demand that the Government of India declare January 11 as National Pedestrians’ Day. The campaign highlights the need for safe, convenient, and pleasant walking infrastructure in the country and to develop a culture where pedestrians are respected. National days serve as occasions to raise awareness about an issue, mobilise grassroot support through actions, garner media attention and thus create political will to address it. CAG and the network of NGOs are reaching out to influencers, celebrities and prominent personalities during this three-month duration to convey this message to a larger audience. This will also be twinned with outreach activities that includes rallies and public engagements on walkability and appeals to policy makers and elected representatives to consider prioritising pedestrian needs during policy making. The campaign also tries to influence motorist behaviour on the roads to be mindful of pedestrians and encourage media to cover and initiate debate on pedestrian safety and walkability.

Regaining our oldest form of mobility

Being able to walk is not just about the society, it also means to be human to be able to walk and is also one of the oldest forms of mobility. The National Pedestrians’ Day also means to celebrate this ability to walk and share the many joys and benefits of walking. It would also highlight the problems pedestrians face, and encourage stakeholders to come together to discuss and find ways to protect, promote and prioritize walkability and foster a culture of walking in society. If you too feel walkability and pedestrian safety has been an issue long ignored by policy makers, it’s time to express your support for the cause