Is Tamil Nadu on the right track to achieve it’s rooftop solar target? Net Metering Vs Feed-In Tariff, an Analysis

With 300 sunny days a year and a reasonably high solar insolation i.e, the amount of solar radiation falling on a surface, Tamil Nadu (TN) is among the leading solar energy producers in the country. Given its geographical advantages and the Ministry of New & Renewable Energy’s (MNRE) 40 GW rooftop solar target, the state is promoting the growth and uptake of rooftop solar through various policies and regulations. 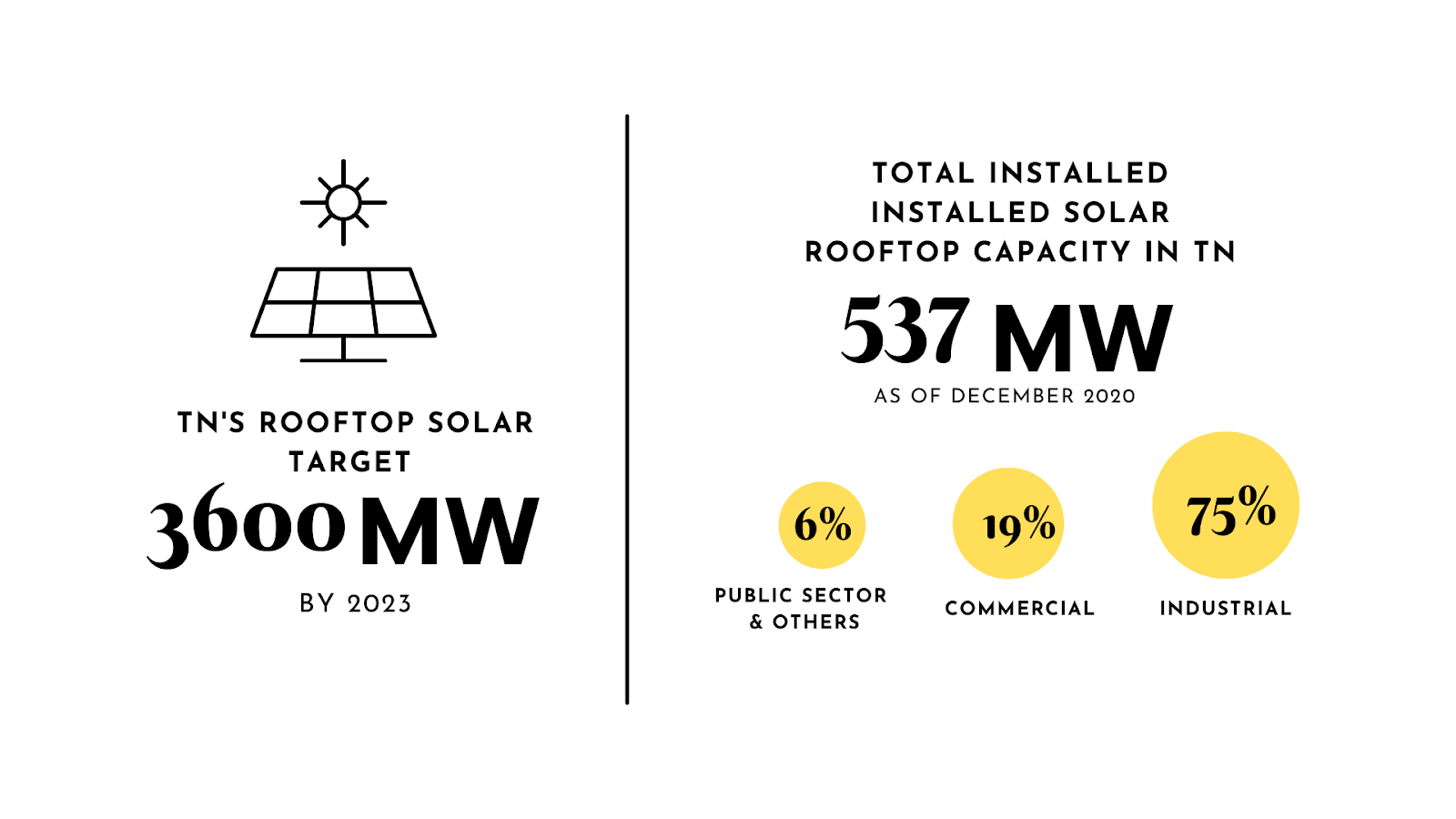 A review of the percentage growth of RTS capacity addition in TN reveals that it is growing at a slower rate in comparison with other states. Clearly, the state needs to promote accelerated growth and uptake of RTS, with a policy focus that extends beyond industrial and commercial consumers who make up 94% of the RTS users. To do so we need to understand why the uptake of RTS has been so poor.

Table 1: TN’s percentage growth of RTS capacity addition in comparison with the average of other states (2016 - 2020) 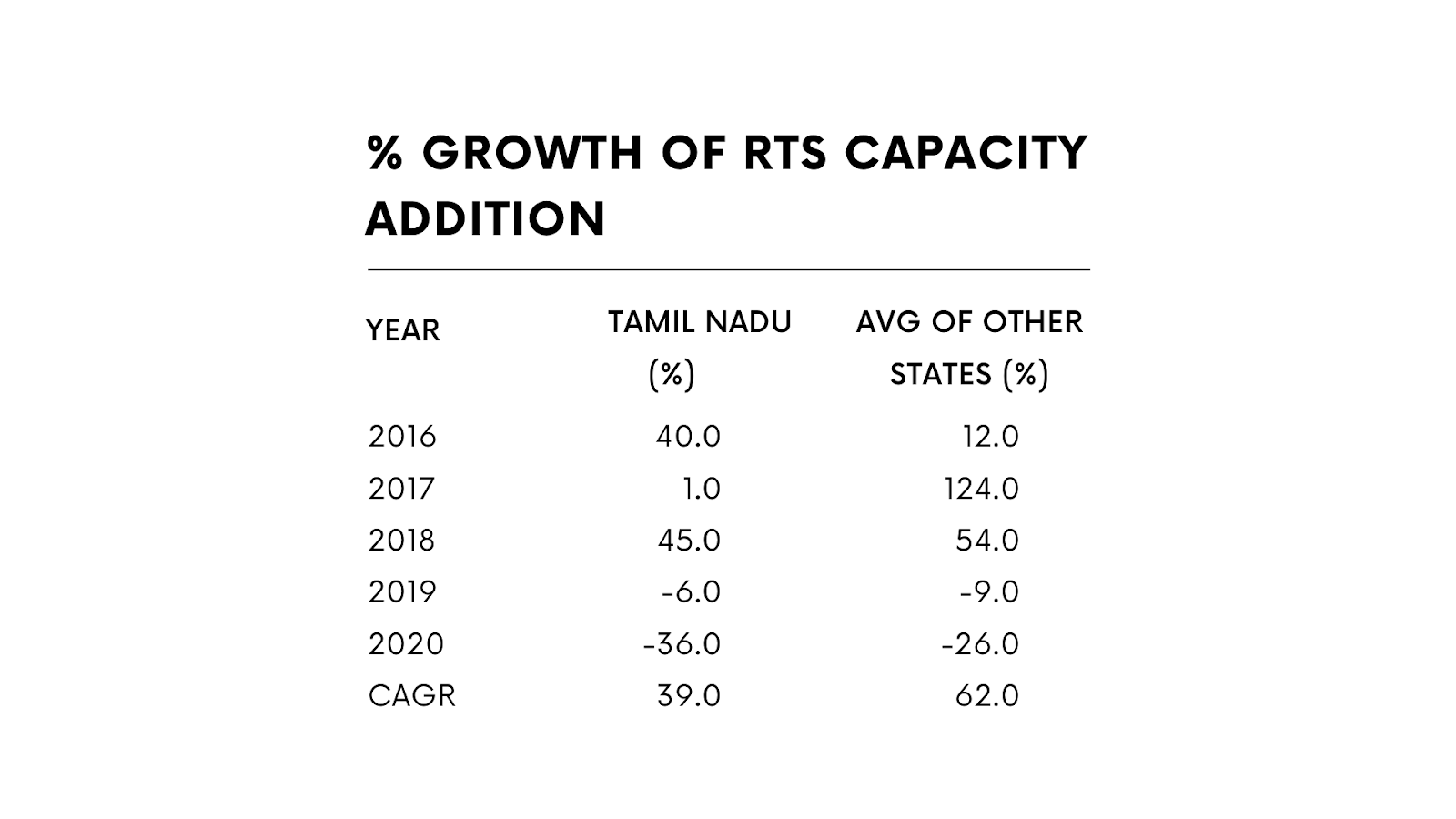 Source: Author’s compilation of data available on Bridge to India

The data in Table 1, indicates that Tamil Nadu’s RTS growth fell rapidly from 2017 which was the year the state changed the compensation mechanism, suggesting a correlation between the two.

Tamil Nadu Energy Development Agency (TEDA) introduced its first Solar Policy in 2012 in which net metering was brought in. Net metering facilities for commercial and industrial consumers was revoked in 2017 (remember the drastic drop in solar PV system uptake?). The new compensation mechanism for commercial and industrial consumers was net feed-in.

In this blog, we analyze the two compensation mechanisms - net metering and net feed-in from the consumer perspective and draw attention to the mechanism that is more likely to positively influence the growth and uptake of RTS whilst securing the best interests of both the utility and consumers.

Under both net metering and net feed-in mechanisms a consumer must connect their rooftop solar with the utility’s grid. This is known as grid-connected solar PV systems and in this system the consumer must have bidirectional energy meters. Therefore the existing utility's service connection meter needs to be replaced or updated with required software so that the meter measures both energy import (from the grid to the consumer) and energy export (from the consumer to the grid). This allows the consumer to sell the excess energy generated by their solar PV system to the grid. In case their energy generation is less than their use, as they are connected to the grid they can access power from the grid.

Net metering is a mechanism by which an electricity supplier (in this case TANGEDCO)  compensates its RTS user/consumer. How does this work? Since the user/consumer is also a producer of electricity, one needs to track how much electricity the consumer is using and how much the consumer is producing. That is exactly what net metering does. In grid-connected solar PV systems, if the solar energy produced is more than the consumption of the building, the surplus energy will automatically be exported to the TANGEDCO distribution network (the grid). If the solar energy produced is less than building consumption requirement the shortfall will be drawn from the grid (energy import). This will be controlled by the bi directional meter.

During the billing cycle (incase of Tamil Nadu, it is bimonthly) if the amount of grid energy used is more than the energy supplied to the grid, the consumer pays only for the net energy consumed (i.e., import - export). In a net metering mechanism the excess energy will be adjusted in the next billing cycle when the exported energy is more than the imported. Hence, the energy exported as well as imported is accounted for in the same tariff. And since solar PV systems require an initial investment (purchase of solar panels, etc), net metering helps the consumer reduce the payback period.

Example: The table below shows the data collected from CAG’s rooftop solar installation. Net metering mechanism is followed to compute the bill. Since TN follows a bi-monthly billing cycle, the months are specified likewise in the table.

Example: Considering the same data from table 2, let us see what will be the bill amount for the tariff I-A (Domestic) category under Net metering mechanism.

In 2019, TEDA introduced a solar policy with certain updates to further promote rooftop solar uptake. According to this policy, consumers who installed RTS after 2019 will follow the net feed-in mechanism for billing and a bidirectional meter will be installed in the premises for the same.

In the Tamil Nadu scenario, for the net feed-in mechanism, a consumer who has installed grid-connected RTS between 2019 and 2020 will get Rs. 2.28 for the export of power for the lifetime of the RTS plant. For the import of power, their consumption charges will be calculated based on their tariff category. The amount for the export will vary from time to time and will be fixed based on the lowest of the following:

a) 75% of the pooled cost of power purchase notified by the Commission under the Renewable Energy Power Purchase Obligations, 2010,

Example: Considering the same data from Table 2, let us see how the bill would be calculated under the Net Feed-in mechanism for Tariff V (Commercial) category.

A comparison between feed-in tariff and net metering suggests that a commercial consumer ends up paying much more when the former compensation mechanism is applied. In this illustration, the consumer would pay Rs. 29,008 for the one-year period under the net feed-in mechanism. Whereas, for the same one-year period and the same consumption, the commercial consumer would only pay Rs. 4,495 under the net metering mechanism. There is a significant difference of Rs. 24,513 between the two.

Example: Considering the same data from table 2, let us see how the bill would be calculated under the net feed-in mechanism for Tariff I-A (Domestic) category.

A comparison between feed-in tariff and net-metering suggests that a domestic consumer ends up paying much more when the former compensation mechanism is applied. In this illustration, the consumer would pay Rs. 11,831 for the one-year period under the net feed-in mechanism. Whereas, for the same one-year period and the same consumption, the commercial consumer would only pay Rs. 1070 under the net-metering mechanism. There is a significant difference of Rs. 10,761 between the two.

As seen from the above analysis, we can conclude that net metering is more favourable to all consumers in Tamil Nadu than the feed-in tariff mechanism. Most consumers prefer net metering as their imported and exported electricity is charged at the same retail price. Net metering may not pay the true value of energy generated but it provides an easier way of calculating the energy consumed which also results in a reduced bill amount; thus, encouraging uptake of RTS among consumers.

As for feed-in tariff, since it is decided by the regulator, it can be flexible and customized for individual projects taking into account geography, capital cost, installed capacity, etc. In reality, tariffs and other parameters are not customised and there are no options given by the regulator for flexibility. Additionally, there is a huge variance between the compensation and the bill for the consumer under the feed-in tariff. Both these factors adversely impact the willingness of consumers to switch to RTS. Unless the regulator fixes the feed-in tariff taking into account the factors mentioned above the consumer will not receive a  satisfactory price which will further discourage uptake of RTS.

Tamil Nadu has set an ambitious target of 3600 MW rooftop solar by 2023.  But, the state’s total installed capacity stands far behind at only 14 percent of the set target. This will require a steep but doable 96 percent growth in two years when one considers the population and number of rooftops across households, businesses, and industries in what is one of the most urbanised states in the country. According to a study by Greenpeace India and GERMI (Gujarat Energy Research and Management Institute), 3015MW per sq km can be easily generated in the Greater Chennai area through rooftop solar. 46% of which can be contributed from the residential sector.

The only push needed in the sector is a consumer-friendly policy with a compensation mechanism that encourages solar uptake.