Bipedalism (standing upright on two feet) is considered the crucial marker of human evolution. Walking, whether on a pilgrimage or as a mode of protest (think Dandi or Selma), is invested with significance, with an aura, a purpose. The effort, the impetus behind walking, the motivation that propels these walks are recognised as something special. The physical hardship, especially on untried roads, in inclement weather, with poor protection for the feet, is in itself seen as a means to nirvana, especially when the body is exhausted and putting one foot before the other seems a great effort. 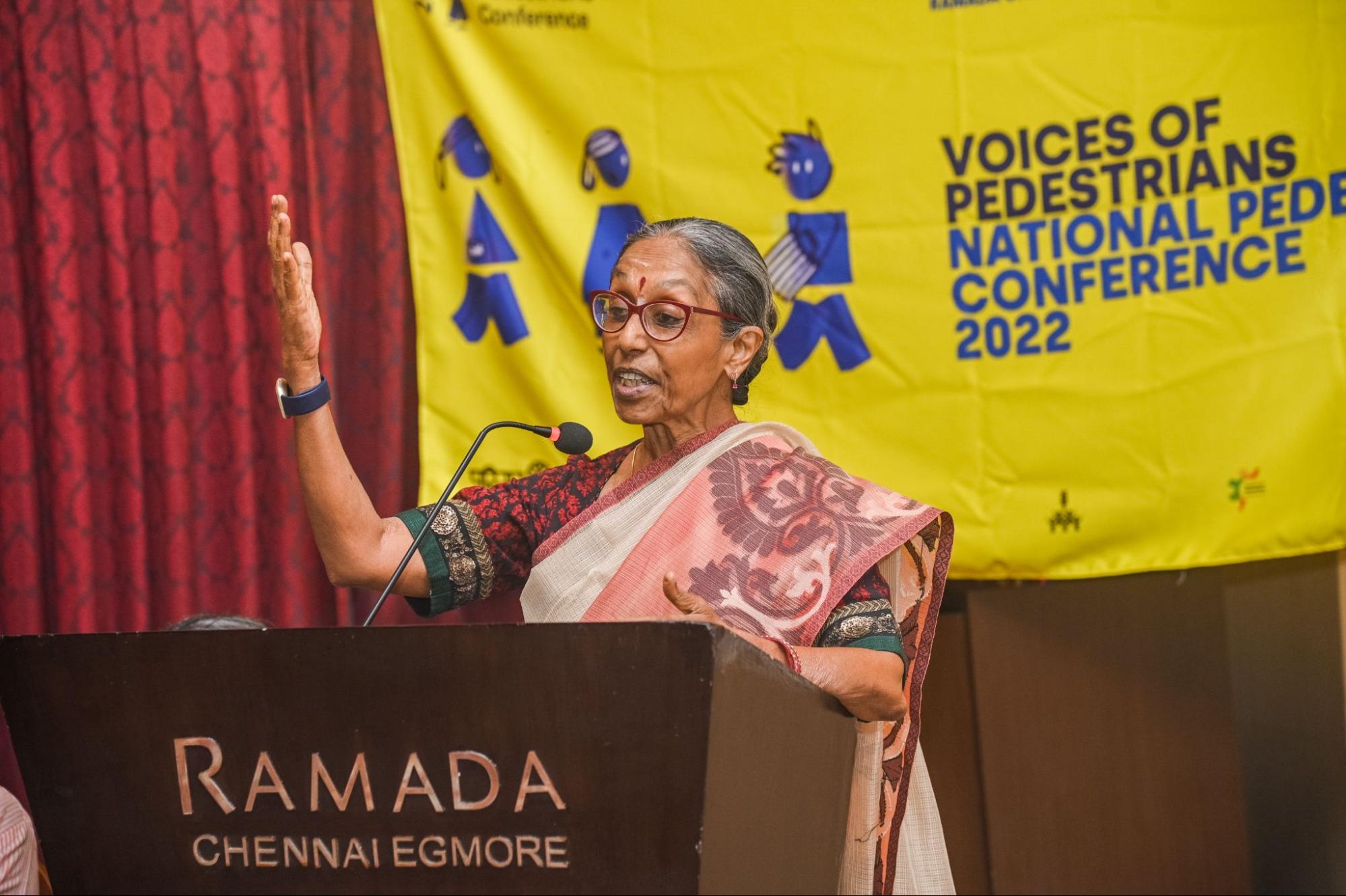 Writers like Thoreau have waxed eloquent about the joys of walking. Walking is a means to commune with nature, to ponder on life, to introspect, reflect and come to terms with the turbulence within and without. Then there is a whole genre of writing around travel, many of them by foot. There is a sense of mystery, of excitement and romance, not to mention a bit of fear of walking into the sunset, into the great unknown.

The more prosaic understanding of walking in today’s context is of the millions of people, especially in the Global South, who walk because they have to. Not because of the glamour or joy (because there is none) but because that is the simplest, most economical, accessible mode of mobility for them. They walk to the shop, to school, to work, or to visit with people (a much savoured luxury in these COVID times).  According to the Census of India, 2011, over one-fifth of the country’s non-agricultural workers commute on foot. Nearly one third of non-agricultural workers do not commute as they live in or adjacent to their workplaces. But of the 140 million workers who do commute to work, one fourth commute less than 1 km and another one third travel 2 to 5 kms.These commutes are either on foot or combined with public transit. Just over 30 million people travel more than 10 km to work and just 17 million of them commute over 20 kms.

Globally, it is acknowledged that walk, cycle, and public transit are the most sustainable modes of mobility. The UN’s SDGs underscore this in Goals 11 & 13, talking of liveable cities as being those that provide affordable, accessible, safe transport for all which is also environmentally sustainable. Again walk, cycle, and public transit tick off all these boxes. In recent years, the conversation around sustainable mobility has been growing more widespread in India. The COVID19 pandemic has also accelerated this awareness of the need for better transit in our cities.

B. Shanthi, a domestic worker, spoke of the travails of her work commute

Yet, planning in our cities continues to be for the minority - those who commute 10 kms or more. This minority typically commute by private transport, have access to the corridors of power and therefore decision making. Indian cities continue to build flyovers, widen roads, expand parking facilities while the lowly pedestrian has to risk life and limb to just cross a road, or walk to her neighbourhood shop.

India recorded an 85 per cent rise in pedestrian fatalities between 2015 and 2019 according to Ministry of Road Transport and Highways data. This is a gross under representation says studies from IIT-Delhi. Either way it paints a dismal picture for pedestrian safety in Indian cities where a majority of women, children, and senior citizens walk.

To highlight the plight of pedestrians, the need to prioritise this vulnerable group of road users, and to listen to the voices of pedestrians - be they senior citizens, children, or domestic and informal workers - a National Pedestrians’ Conference was organised on March 11th and 12th, 2022 in Chennai. The Conference, the second of its kind, was organised by SUMNet India, a network of civil society organisations working for sustainable mobility in Indian cities. CAG, as a SUMNet India member, hosted the event. The key points raised during the conference were on the lack of policy support for pedestrians; poor planning and infrastructure; lack of thought to ensure roads are accessible by all; low priority given to enforcing pedestrian rights; and concerns of safety on the roads. The Conference saw participation from civil society organisations across India, urban planners, architects, informal workers, domestic workers, senior citizens, children, teachers, retired bureaucrats, and persons with disabilities.

Although there are several national legislations and policies around transport, they contain little on walking. The principal act, the Motor Vehicles Act 1988 (and the Amendment Act of 2019) do mention that endangering the life of pedestrians is an offence along with giving states the power to prohibit motorists from using footpaths. The National Urban Transport Policy (NUTP) of 2006 and 2014 speak of the need to encourage walk/cycle/public transit and that these must be accessible, affordable, and equitable. Beyond these, as transport is a Concurrent Subject, there have been city-level policies on non-motorised transport, such as Chennai’s 2014 policy.

While all of these clearly recognise that pedestrians (and cyclists) are overlooked, that this is a vulnerable group who need to be promoted as sustainable, equitable, and affordable modes of mobility, there is little in the way of regulation. Nor are pedestrians placed front and centre of transport governance and planning. 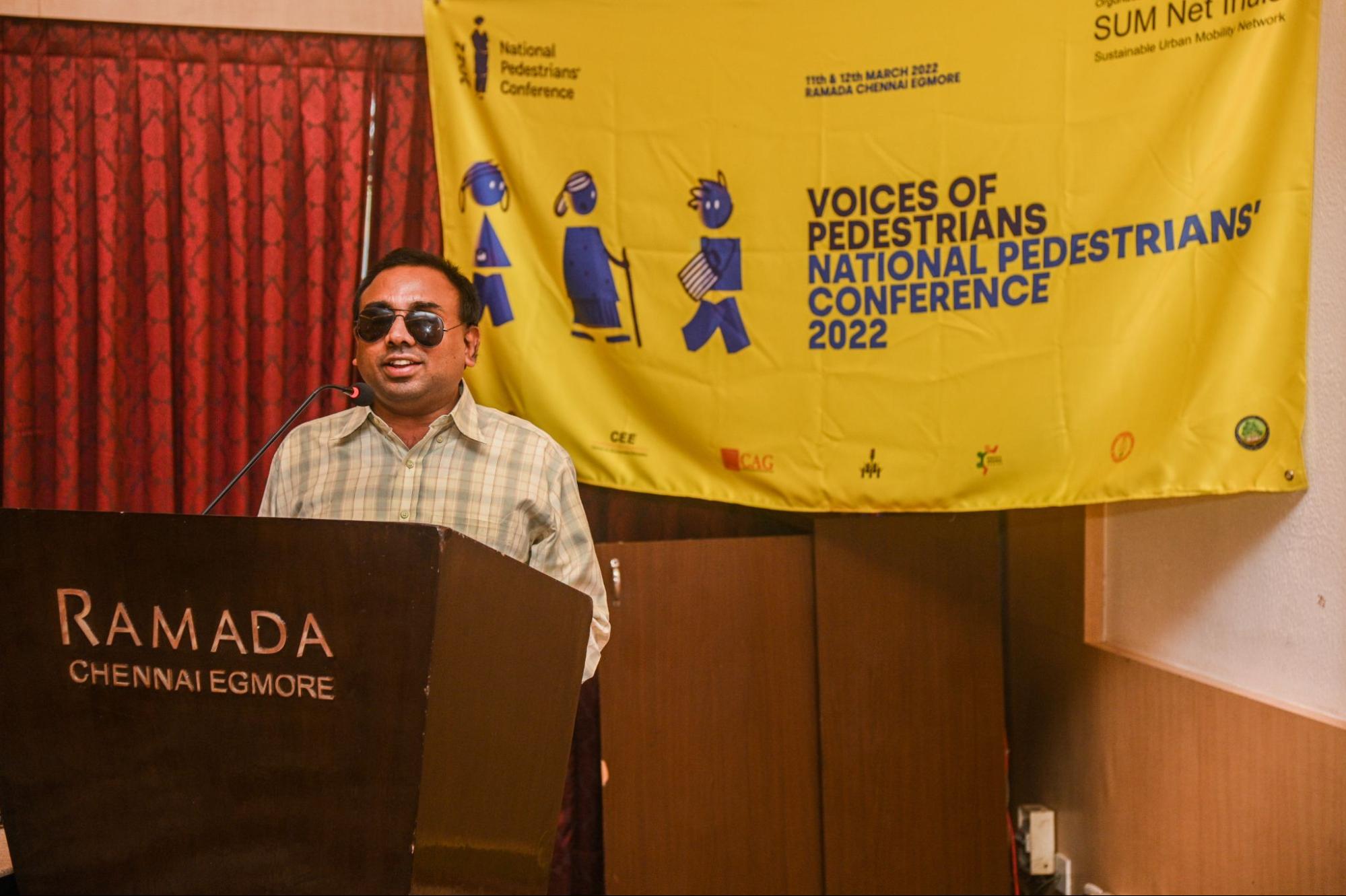 All the speakers highlighted the poor to non-existent pavements and pedestrian crossings. As B. Shanthi, a domestic worker, pointed out, shops and parked vehicles take up pavement space, forcing pedestrians onto the road where they are at the mercy of speeding vehicles. K. Raghuraman, a blind disability rights activist, spoke of how pavement surfaces are not uniform and there is no way for him to know when the pavement ends and the road begins. He also shared an incident where he stepped off the Chennai Metro to walk straight into a pillar, pointing to poor planning and design in public transit.

Across India, pavements are encroached upon - by vendors, shops, various government utilities, garbage, construction debris, and parked vehicles. Clearly the general attitude among road users and officials seems to be that traffic flow cannot be hindered and therefore any potential hindrance must be placed on the pavement. Rarely are such encroachments removed and even when they are, the pavements stay clear for a day or two before they are encroached upon again!

Another point highlighted was that pedestrians are also not respected even when there are clearly marked pedestrian crossings and the push is to force them to walk a longer distance to access a subway or foot overbridge. Again the concern being that motorised vehicles are not inconvenienced.

The keynote speaker, Ms. Santha Sheela Nair, IAS (retd) highlighted that while the conflict between small vendors and pedestrians is often focussed upon, the important role of small vendors in being the eyes on the street, giving pedestrians (particularly women) a sense of safety is ignored.

Senior citizens and persons with disabilities pointed out that the little pedestrian infrastructure available scores poorly on accessibility. As they noted, pavements are often a foot or more high with no slope or ramp access making getting on the pavement a Herculean task. Then the surface of the pavement is often uneven, with broken tiles, rubbish etc or is so smooth that a pedestrian is likely to slip and break a few bones. Prof. V.S Sunder, a wheelchair-bound disability activist, highlighted that in an effort to keep out two-wheelers, pavements are blocked by bollards that are placed too close together for a wheelchair to pass.

Another thread common to speakers was the callousness of motorists who treat pedestrians as second-class citizens with no right to be on the road.

All of these have ensured that the modal share of walking has dropped in the past few years. The question arises when will we walk the talk on making urban transit more sustainable and safe? While lauding the many efforts ongoing in the country to promote walking, it was noted that fundamentally the attitude towards walking has to change at every level. Walking and pedestrians have to be placed front and centre of urban planning