Who is the real polluter?

China had been the dump yard for most of the developed countries, with the US, Japan, Germany, UK on the top list of waste exporters to developing nations. When China announced its National Sword policy, the exporter nations began looking for alternatives to do their dirty job, resulting in waste entering other Asian countries. However, in 2019, several other Asian nations, including Malaysia, the Philippines, Thailand, and Vietnam followed in the footsteps of China and closed their doors to western waste.

Plastic waste and the resulting pollution are one of the top concerns of our time. While it is difficult to stop plastic production all at once due to several factors, the post-consumption stages can be handled in such a way that plastic is rerouted from reaching the environment. The current accusation against Asian nations is that they mismanage their waste. While it’s true that solid waste management is a major challenge for developing nations, it would be wrong to assume that all of the blame falls at their doorstep. In fact, the solid waste ban by China has urged the world to look at this plastic problem a little deeper. Where do developing and developed nations stand in terms of the plastic waste problem? How can we understand this better from a global perspective? Are there any solutions to it? To understand these issues further, it is convenient to consider them as follows: a) the global consumption of plastic b) ways of plastic disposal in different countries.

More than 40% of global waste comprises biodegradable waste. The second-highest category is paper and cardboard (17%) and plastic (12%), respectively. But this waste composition differs drastically based on the income level of the country (Figure 1). Biodegradable waste is lower in high-income countries; as income goes higher, the consumption of paper, cardboard, plastic (packaging materials) goes higher too. This pattern can be seen in other categories as well. These are consumer economies and hence the packaging industries (which includes plastic, paper and cardboard) contribute to their waste. 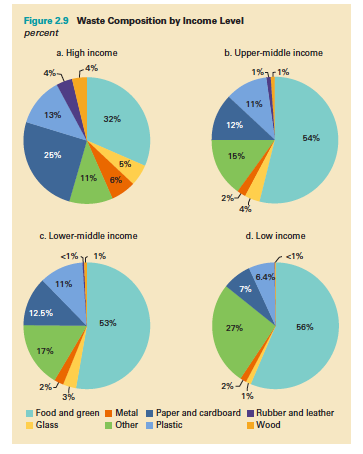 The inequality in plastic consumption is evident, with per capita consumption of plastic in high-income countries far outweighing the rest of the world (Figure 2). These are consumer economies and hence the packaging industries (which includes plastic, paper and cardboard) contribute to their waste. In India, a person generates 0.3 kg of plastic in a month. In contrast, a person in Germany or the Netherlands generates 0.4 kg of plastic per day which amounts to 12 kg per person per month - 40 times more than in India! 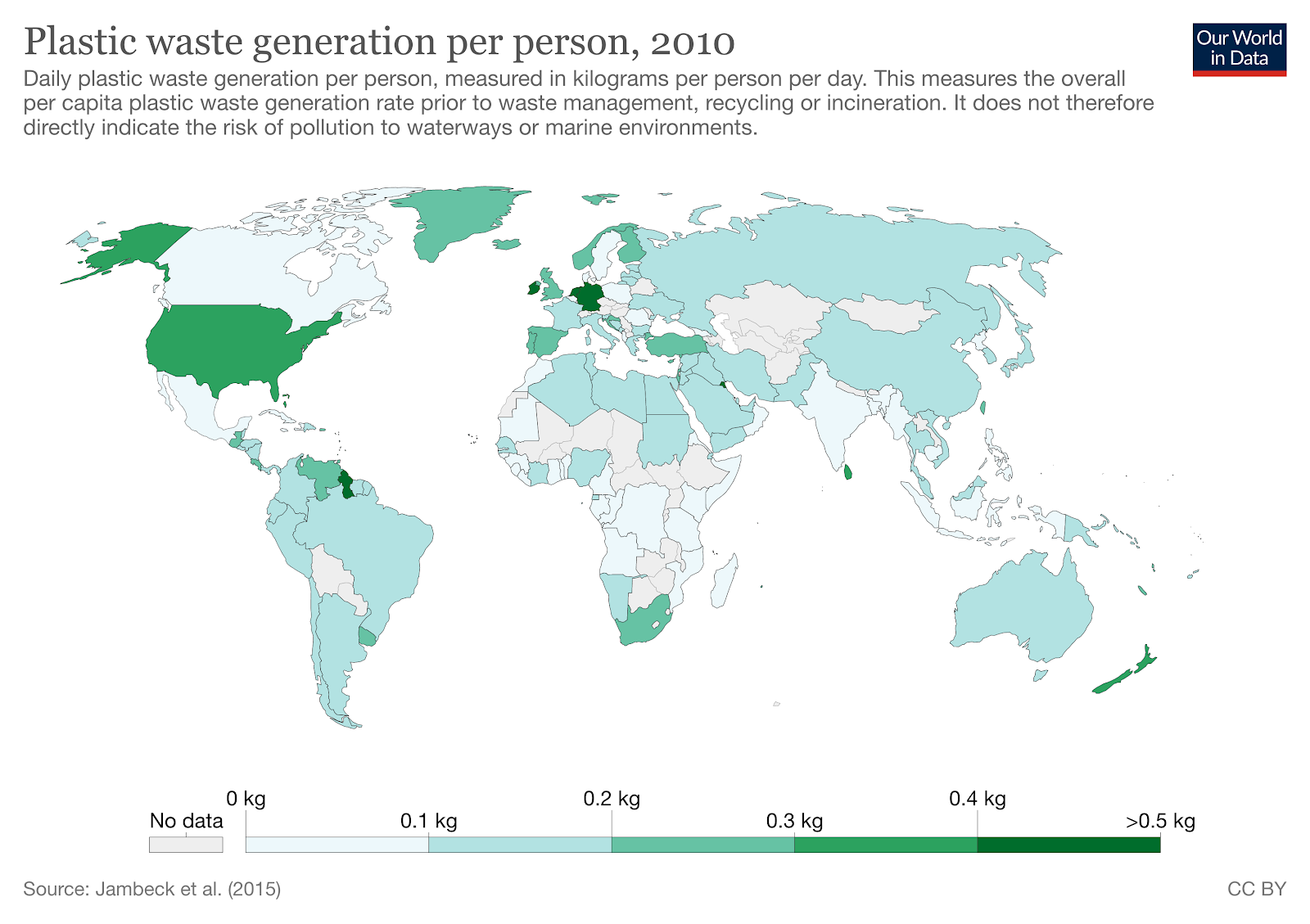 Despite the high production of plastic waste, the consensus on these countries is that they have “well-managed waste streams and therefore low levels of plastic pollution to external environments,'' as is stated in the Our World Data report (Figure 3). 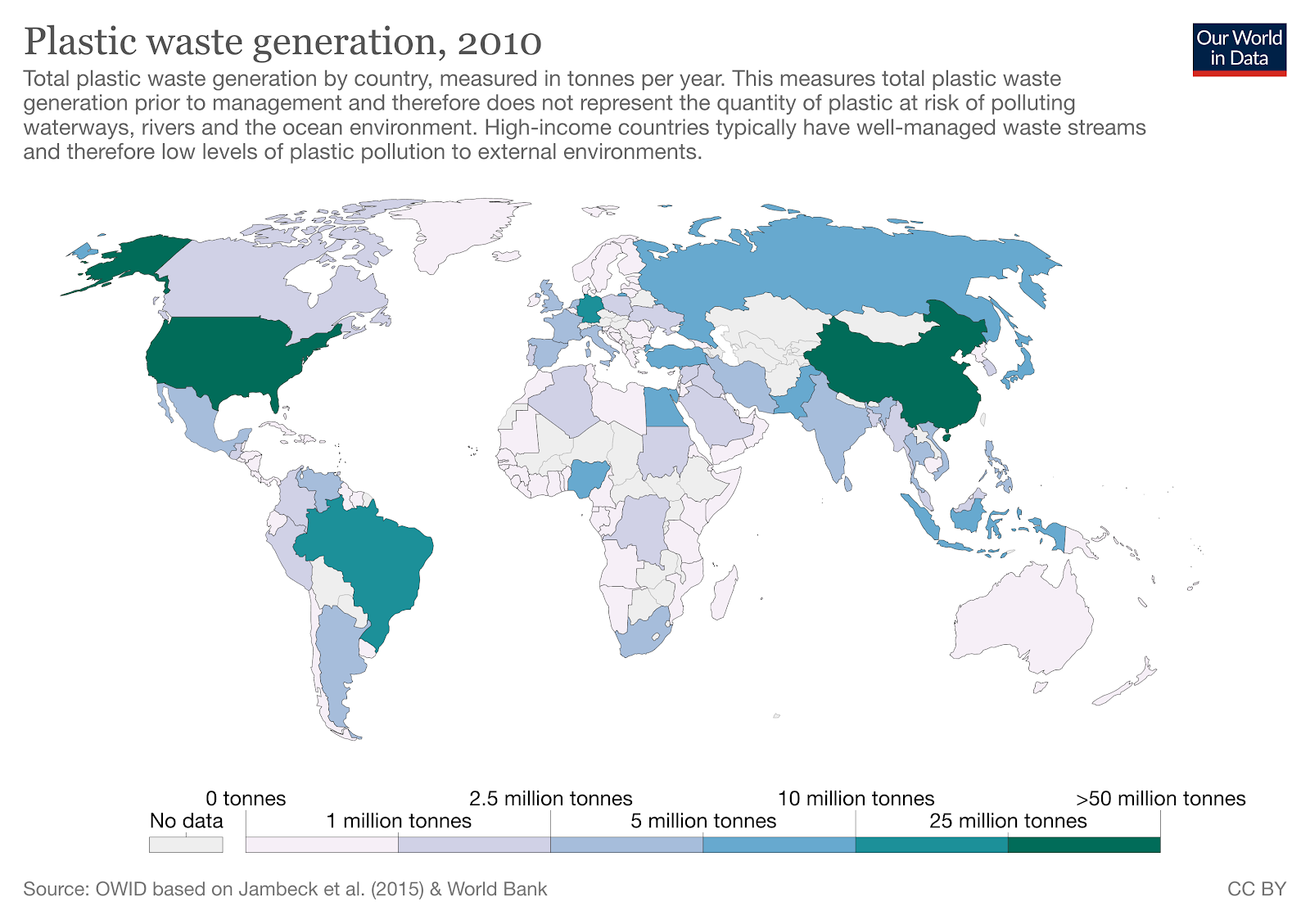 There are different ways of waste management and these include open dump, anaerobic digestion, landfill, incineration, composting, recycling, and other advanced methods. This, too, varies across countries based on their income level and region (Figure 4). High-income countries send 39% of their waste to the landfill, 29% for recycling and 22% for incineration. Germany has the best recycling rate in the world- recycling 56.1% of its municipal solid waste. According to the EU's plan for a circular economy, they aim to achieve 70% recycling of packaging waste and 55% of plastic by 2030. In reality, these countries export much of their waste to developing countries, such as Vietnam, Malaysia, Indonesia, and the Philippines. The poor waste management systems, weak environmental regulations and cheap labour in these Asian countries defeat any efforts to curb the plastic menace. In addition, the plastic waste thus traded in, is often contaminated with other household wastes, such as food leftovers. The Basel Convention of 1992 particularly forbids such trade in contaminated waste. 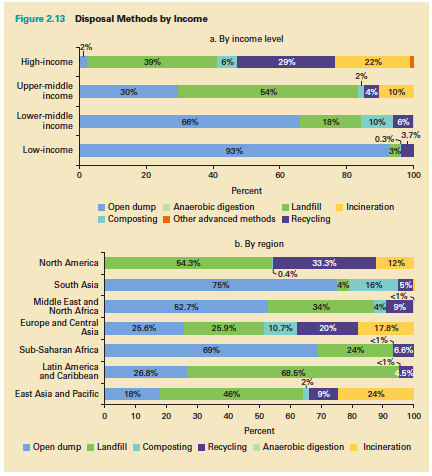 Recycling and incineration are very expensive and take a toll on the environment. It releases dioxins and leaves a significant carbon footprint. Despite these concerns, in the recycling/incineration world, it is business as usual, fostering a linear economy. The concept of recycling has also been fraught with worrying behaviours by large corporations. For example in the USA as a part of ‘Keep America Beautiful,’ Coca-Cola’s smart misdirection or ‘greenwashing’ was actually intended  to shift focus away from Extended Producer Responsibility (EPR). For the recycling industry to survive, it needs to be fed with plastic. It turns out that the “well-managed” waste stream is not so well.

“We cannot solve our problems with the same thinking we used when we created them'' as Einstein rightly said. So far, the solutions offered to the plastic problem have been created by consumer economies or capitalist systems. Accordingly, it has focussed more on creating an impression of caring, whilst continuing to go about business. This is the expected outcome when billionaire lobbies pull the strings of decision making. In reality, to solve this worldwide menace, we need to rethink the entire plastic production and consumption system. Consumers should refuse, reduce, and reuse. Producers, instead of obscuring the problem through false promises of recycling, should actively take responsibility for the post-consumption life of materials. They must redesign their products, packaging and delivery systems with the objective of eliminating waste, reducing the use of new resources, and enabling repair and reuse.

With China’s bold step forward, it is evident that plastic management cannot be considered the burden of developing nations alone. River Yangtze is the world’s top polluting river with approximately 333,000 tonnes of plastic pollution in 2015; and much of this waste was likely generated by consumers living in the West. Plastic pollution has become a geopolitical concern and it highlights the urgent need for a global treaty on plastic.