CAG analysed compliance with helmet and seat belt rules in Chennai city and found that since 2017 (when CAG carried out its first compliance study) more two-wheeler riders and car drivers were complying with the law. However, pillion and passenger compliance is non-existent. A perception survey among two-wheeler and car users found that many of them believe they comply with the law when they actually don't and a majority of them agreed that stronger penalties and stricter enforcement of the law would help. 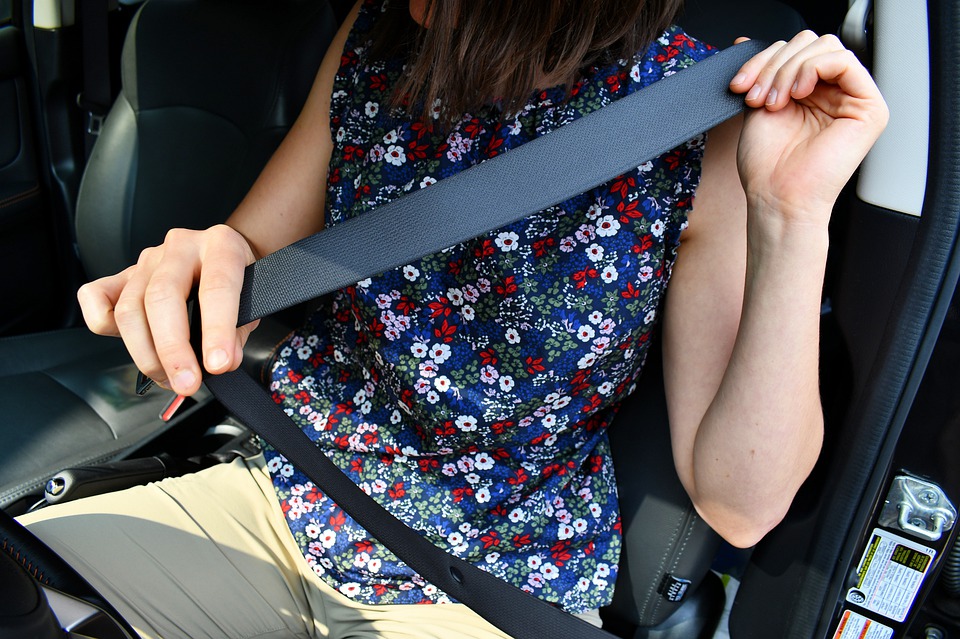 For the past few years, after a couple of PILs were filed, the Madras High Court has taken considerable interest in the enforcement of road rules. It has pulled up the state government for not implementing the Motor Vehicles Act 1978 (now the Amendment Act of 2019). The Supreme Court Committee on Road Safety has also been closely monitoring the situation in each state and taking states to task. The state government for its part has been making an effort with regards to road safety and this has been showing results. On helmet and seatbelt violations, media reports note that crackdowns on this have gone up in 2019.

In 2019, with the passage of the Motor Vehicles Amendment Act, a hike in penalties for such violations was anticipated and this, it was hoped, would act as a deterrent. Accordingly, when the Government of India issued a notification bringing the new penalties into force from 01, September, 2019, there was a visible increase in helmet compliance (in Chennai at least) for a brief while. However, the notification is yet to be implemented in Tamil Nadu and the old fines continue to be levied resulting in poor compliance.

In February 2021, as part of the National Road Safety Month, CAG conducted an assessment of the compliance with helmet and seatbelt rules in Chennai. Ten busy intersections were surveyed at different times of the day (covering 2 peak hours and 1 non peak hour) and the number of riders and pillions wearing helmets was counted and similarly for cars, the number of drivers and front passengers wearing seat belts was counted. Rear seat passengers were not observed due to practical difficulties as well as the fact that the focus of awareness drives and enforcement efforts has been on the car driver and front seat passenger. This survey builds on a similar exercise conducted in 2017.

Of the locations listed, the first 8 were also surveyed in 2017 for rider/driver compliance. Two other locations were chosen to ensure greater geographical spread and also because in one of them (Anna Nagar), in 2018-19, the city police had installed CCTV cameras with licence plate recognition software.

A perception survey of 539 two-wheeler riders and 501 car drivers was conducted to assess their knowledge of helmet and seatbelt rules and their opinion on ensuring greater compliance with these rules. The perception survey was administered via the open access app, Kobo Toolbox.

What did we find? 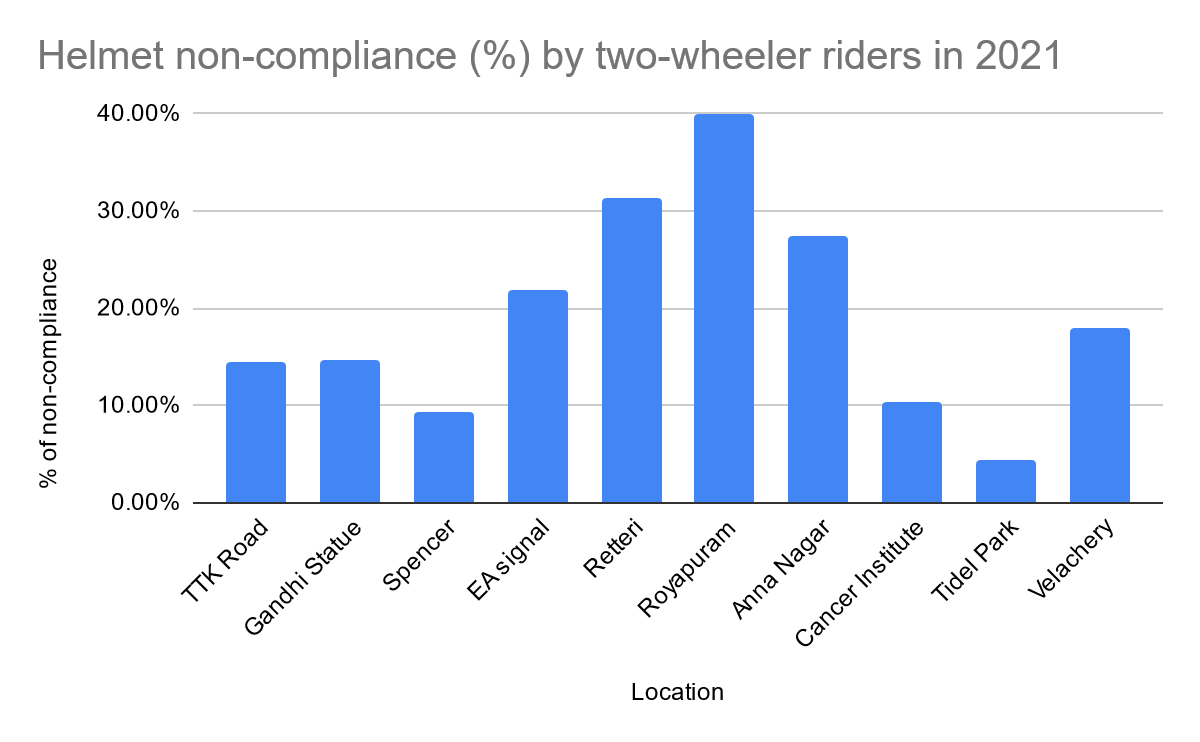 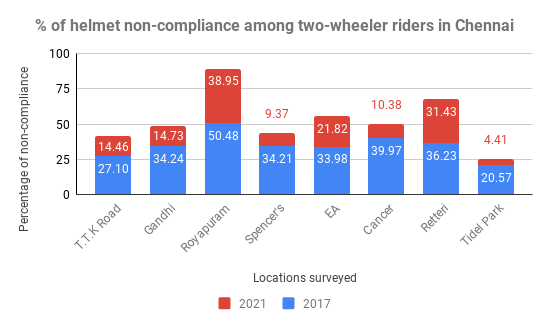 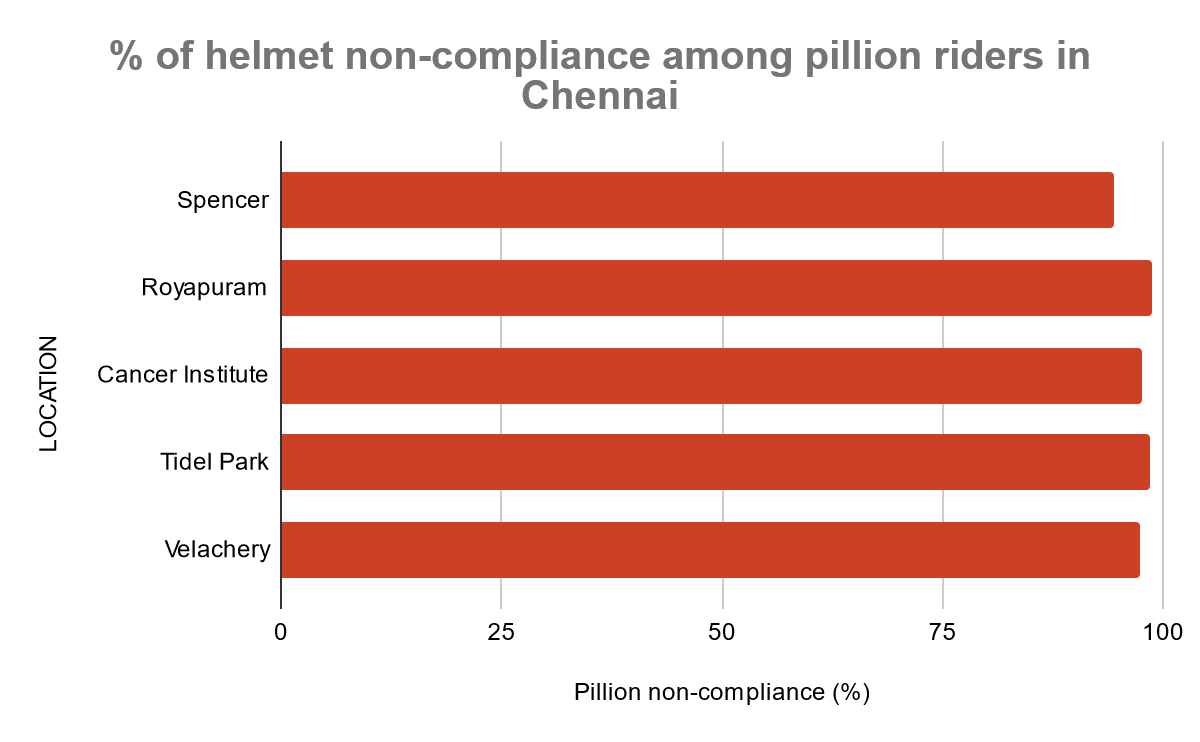 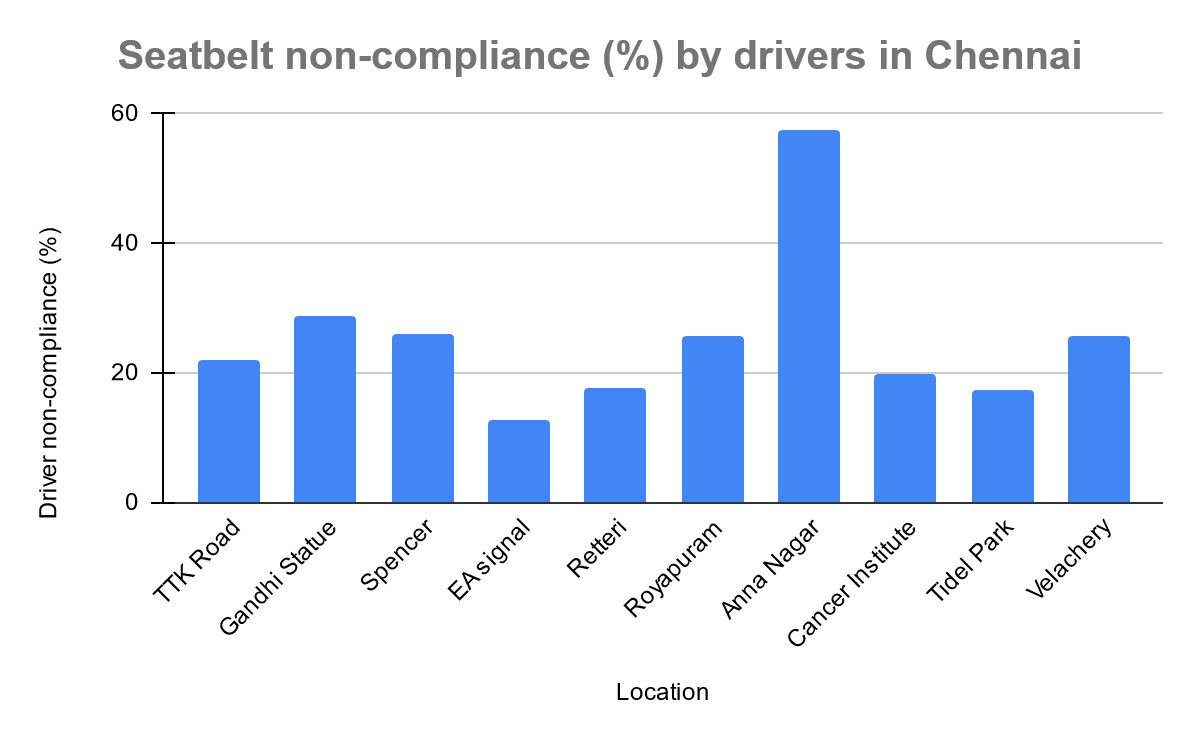 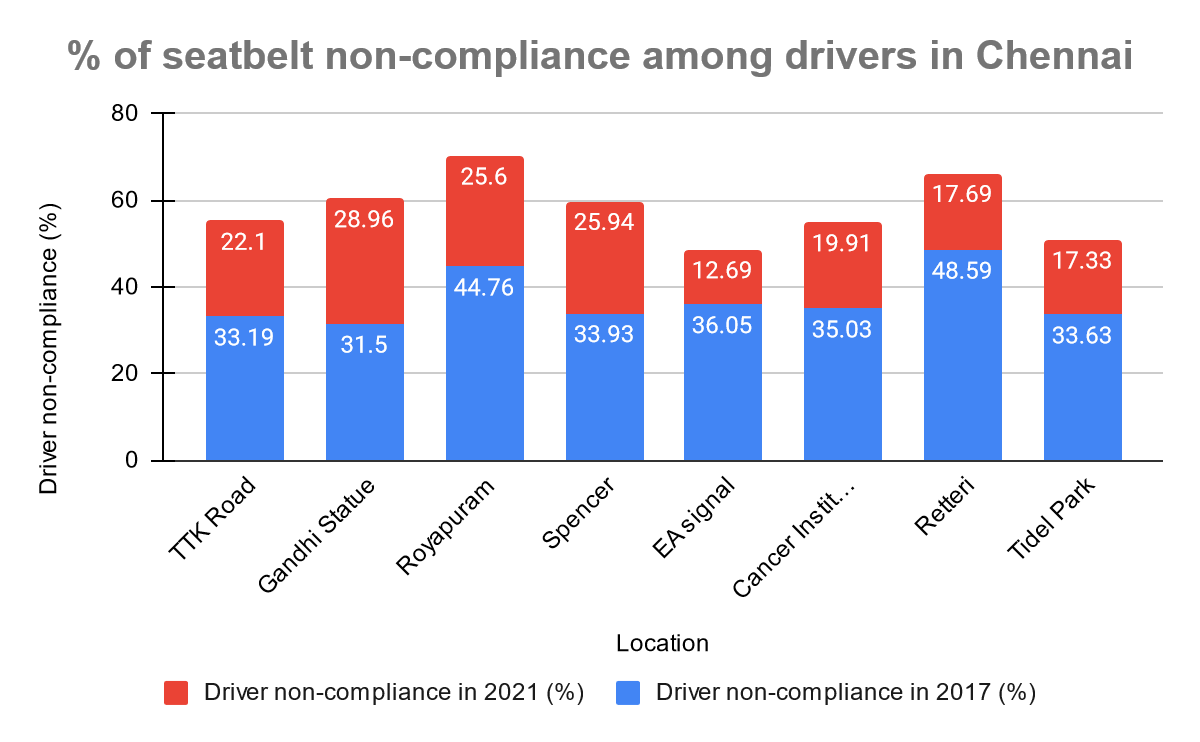 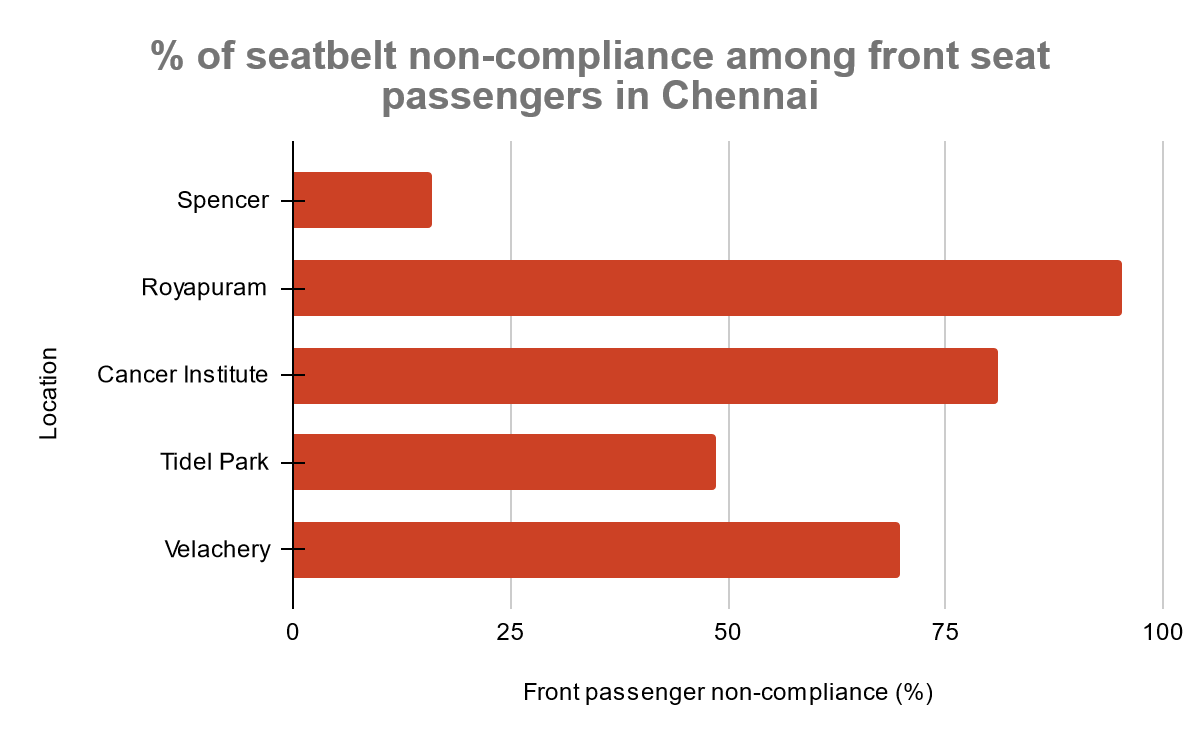 Of the 539 two-wheeler user respondents, 250 were women and of the 501 car driver respondents, 250 were women. Reasons given for not wearing a helmet or seat belt were similar across age groups - discomfort, feeling restricted, believing that they are safer riders/drivers and therefore do not need this, that they typically drive on smaller roads (the subtext being that these are roads safer, negating the need for helmets/seat belts). Two wheeler riders in addition were concerned about how helmets messed their hair, purportedly caused hair fall, and is unfashionable.

Of the 539 respondents, most claimed to wear helmets when riding a two-wheeler. When asked what would make them wear helmets, they responded that greater enforcement of rules and higher penalties combined would ensure better compliance. And finally, we were curious to know if they were aware that pillion riders are required to wear helmets. A majority of them responded yes. 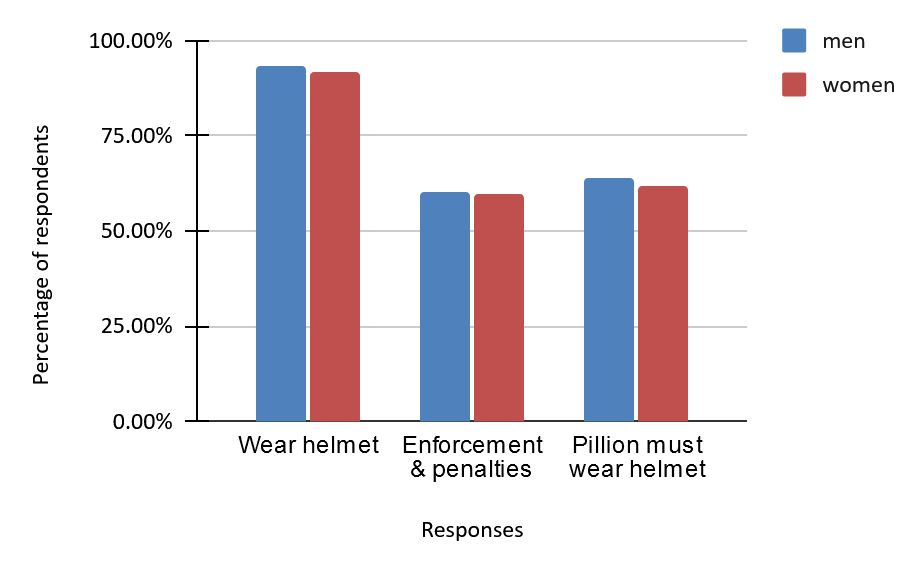 A similar perception survey around seat belt use among car drivers was conducted. Of the 501 respondents, most claimed to wear seat belts. When asked what would make them wear seat belts, they responded that greater enforcement of rules and higher penalties combined would ensure better compliance. And finally, around 75 per cent responded in the affirmative on whether passengers are required to wear seat belts. 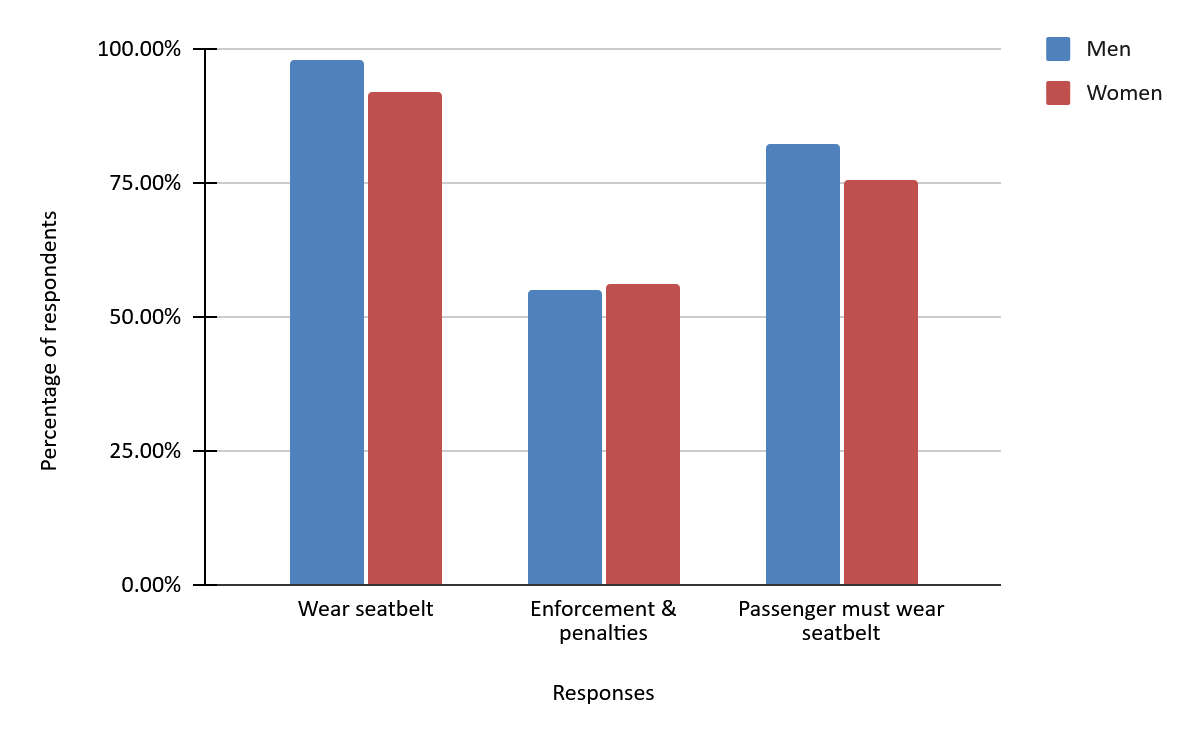 Clearly at the eight signals which were surveyed both in 2017 and 2021, there is an improvement in rider compliance which is heartening. However, the level of non-compliance varies dramatically from 4 to 40 per cent. It would be interesting to understand why compliance is much better in places like Tidel Park and Spencer’s compared to Retteri or Royapuram. Is there a difference in enforcement or visibility of police personnel or is there some other factor at play?

Like helmets, the seat belt compliance among drivers has improved since 2017 though perhaps not as dramatically as with helmets. This could be due to sustained campaigns being done by the government and others. The government has also been carrying out regular enforcement checks with regards to helmet and seat belt  compliance. These potentially could have contributed to better compliance. At the same time, front seat passenger compliance is extremely low. Rear seat passenger compliance, as noted, was zero. Perhaps this speaks to the fact that awareness and enforcement campaigns have focussed largely on the driver and not on passengers.

Anecdotal evidence in September-October 2019 showed a sharp increase in compliance when the Government of India notified the increased penalties under the Motor Vehicles Amendment Act, 2019. Clearly, there is awareness of the rules and that, at least, temporarily the news of increased penalties had an effect. However, this momentum was lost when the state did not implement the notification. The perception survey found that a majority of respondents felt that stricter enforcement and higher penalties will result in greater compliance. So, there is public support for the idea. And certainly, as seen by the improved compliance in late 2019, albeit briefly, higher penalties do work as a deterrent to road rule violation.

Since 2017, Tamil Nadu has been upping its game with regards to road safety and the impact is showing in the reduced fatalities. Implementing higher penalties can contribute to this performance. Media reports note that cases booked for helmet rule violation had gone up by 91% in 2019 (translating to 12,80,339 cases booked) compared to 2018. This was information shared by the Tamil Nadu Police to the Madras High Court.

A similar situation is seen with seat belt compliance. Media reports indicate that of the 11.78 lakh cases booked in 2018 across Tamil Nadu for lack of use of seat belts, Chennai’s contribution was 1.04 lakhs. Of the 2068 deaths in 2018, 78 per cent was because of non-compliance with the seat belt rule and nearly half of these deaths were of passengers. Tamil Nadu is second in seat belt non compliance. Consider as well that of the 792 two-wheeler riders died in Chennai in 2018 and of them 98 percent were not wearing helmets.

Clearly stronger enforcement combined with increased penalties as per the Motor Vehicles Amendment Act, 2019, would have a huge impact. It is past time that the Tamil Nadu government implemented the provisions of the MVAA 2019 to save lives on our roads.