Jaywalk at your peril!

One of the first things impressed upon me when I landed in the U.S as a fresh off the boat student, was never to jaywalk. Completely unfamiliar with the concept, it took a while to sink in that I could be fined for crossing the road unless at designated spots. Back then I never questioned the logic. Recently, reading an article about jaywalkers getting killed, I wondered as to its origins.

The Internet informs that this term comes from the use of ‘’jay’ to refer to silly, empty-headed people (a touch of classism here as it was also associated with the country bumpkin) in the early part of the 20th century. A sustained campaign by the automobile industry to shift the blame for crashes from motor vehicles to pedestrians, led to the popularity of the word with cities across the U.S adopting anti-jaywalking laws.1 An interesting aside is that the phrase began as jay-drivers for those who drove on the wrong side. Somehow that word didn’t survive but jaywalking did!

The story of jaywalkers in India is long and convoluted. Indian roads are known for the mixed traffic; and by mixed, we mean everything from animals to pedestrians to bullock cars to fast cars. The reasons for this are simple: our roads make poor provisions for any form of traffic other than motor vehicles. Therefore, as pedestrians we typically jostle alongside motor vehicles and nobody bats an eyelid. We certainly do not think of ourselves as jaywalkers who are breaking the law by engaging in reckless behaviour. However, should a pedestrian be hit and killed, and should this reach the courts, only then do we look for people to blame, starting with the question, ‘Should a pedestrian really be walking on the road?’

Typically, blame for a crash is assigned to one of the road users involved or the road system itself but more often than not it is a combination of factors. So when a court is called to pass judgement on a case with a complex system of errors, each one compounding the other, it can be hard to apportion blame. Let us discuss a case that recently made it to the news that sadly involved the death of pedestrians.

In August 2022, two jaywalkers were hit by a car on Nelson Mandela Road in New Delhi.2 One of them succumbed in hospital. A case of rash and negligent driving was booked against the car driver who petitioned the Delhi High Court that she was not at fault. There were also other factors that the defence noted, namely the veracity of the eyewitness(es) account (on whether the car driver had stopped or not) and the process followed by the police while investigating the case. The court in the end ruled that she was not guilty but since she and the family of the deceased man had come to an agreement on recompense, that would hold.

Now before we get into the logic of the court’s decision and why we are even discussing the case, let’s recap what happens in the case of a road crash where people are injured or killed. The Police file an FIR (first information report) on the incident - what happened, when and where and who was involved. A case is then booked under Sections 279 and 337 of the IPC (Indian Penal Code) that say:

Section 279: Rash driving or riding on a public way.—Whoever drives any vehicle, or rides, on any public way in a manner so rash or negligent as to endanger human life, or to be likely to cause hurt or injury to any other person, shall be punished with im­prisonment of either description for a term which may extend to six months, or with fine which may extend to one thousand rupees, or with both.

Section 337: Causing hurt by act endangering life or personal safety of others.—Whoever causes hurt to any person by doing any act so rashly or negligently as to endanger human life, or the personal safety of others, shall be punished with imprisonment of either description for a term which may extend to six months, or with fine which may extend to five hundred rupees, or with both.

If the injured person dies (within a stipulated time of the crash) then Section 304A gets added. This says:

304A. Causing death by negligence.--Whoever causes the death of any person by doing any rash or negligent act not amounting to culpable homicide, shall be punished with imprisonment of either description for a term which may extend to two years, or with fine, or with both.

The court noted that rash and negligent behaviour had to be proved. Quoting the Supreme Court, the judge noted that Section 304A applies when there is no intent to cause death and no knowledge that the act would lead to death. He also defined rashness as “doing an act with the consciousness of a risk that evil consequences will follow but with the hope that it will not”. Again, quoting the Supreme Court, he notes that merely because a truck was being driven at ‘high speed’ does not speak of negligence or rashness by itself. The court, in this case, also noted that none of the witnesses said that the car was being driven in a rash or reckless manner knowing that the result of such driving was most likely to cause injury to any person.

The witnesses in the case were the second jaywalker (sister of the deceased), and a roadside paratha shop owner. Considering eyewitness accounts are generally quite unreliable, biased, and in this case the eyewitnesses may not even drive themselves, and therefore at an even greater disadvantage to gauge whether the driver was behaving rashly or whether the car was speeding, how can their take be relied upon? In another case, the Madras HC3 ruled that rash and negligent driving can only be proved by eyewitness testimony to that effect. If we have no options but to rely on eye witnesses to prove a crime, clearly, protocols on defining rash driving, how and when witnesses are questioned and robust mechanisms to determine if a driver is guilty of rash driving are required.

If rash driving is difficult to prove because witnesses are unreliable, this throws the door wide open to literally getting away with murder. Speeding could be another way of determining crime. While the judge in the Delhi case argues that ‘speeding does not equate with rash driving’, nevertheless, speeding is breaking the law. IF the car was speeding i.e driving over the speed limit, then that in itself is illegal as presumably the speed limit is fixed keeping in mind the safety of all road users. In addition, it is only common sense that in India, traffic is complex, disorderly and pedestrians tend to cross anywhere and everywhere, it behoves a driver to stay well within the speed limits and be extra alert when driving. However, if speeds of vehicles are not captured by speed radar then how can one prove a car driver was speeding?  This again leads to guilty motorists getting away scot free. 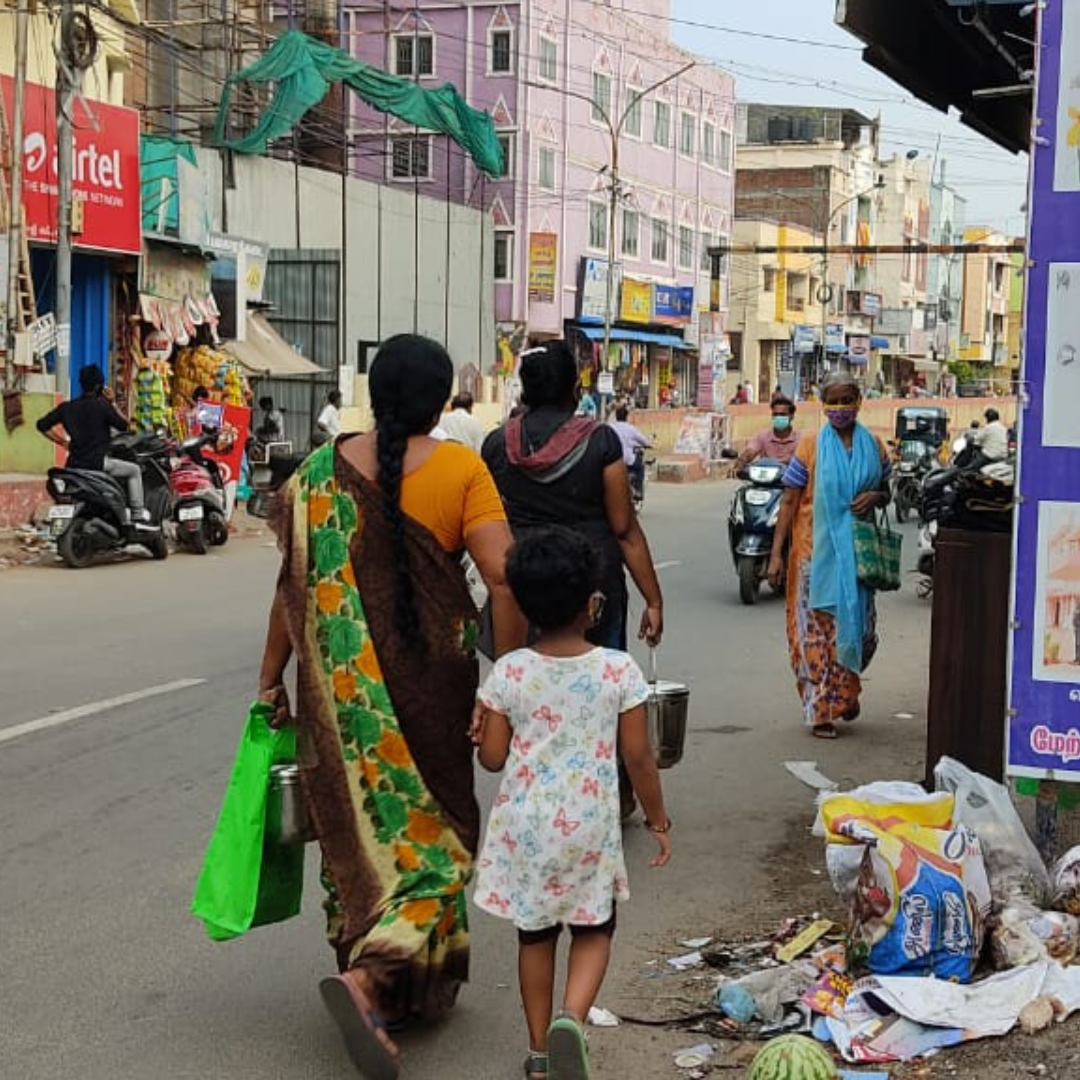 How safe is the system? (Pedestrian first approach)

While in this case, the court did not blame the pedestrian, in another, similar case in Mumbai,4  the court blamed the pedestrian for crossing where there was no pedestrian crossing. What this fails to factor in is that pedestrian crossings are too few and invariably require a fair bit of walking. The solution is not foot overbridges and subways as these are poorly made, demand a lot of effort from the pedestrian, and are unclean and unsafe.The Indian Roads Congress (IRC) guidelines call for pedestrian crossings every 200m. This is rarely adhered to. A study by IIT-M (Indian Institute of Technology-Madras), analysing official data from 2017 to 2019, found that 80% of pedestrians in Tamil Nadu met with accidents while walking on the pavement (51%) or crossing the road at pedestrian crossings (20%).5  At least 25% of these accidents were fatal. So really it matters not whether the pedestrian is obeying every rule in the book or not; she is basically fair game for stepping out on foot. And as seen in these two examples, in case of a fatal crash, bringing the perpetrator to justice can be a difficult task.

In spite of one-third of work trips in the country on foot, pedestrian safety is not prioritised.6 The number of pedestrian deaths in India increased from 13,864 in 2015 to 23,483 in 2020, making them the second highest category after two wheelers in terms of fatalities.

On a broader scale, it is time to rethink our approach to traffic planning, driving, and the roads. Globally, cities are adopting the Vision Zero approach that looks to reduce fatalities and injuries while accepting human error is a given. The aim is to make the system, the infrastructure, as safe and forgiving of human error as possible so as to minimise the damage on the human. Curtailing speeds through speed limits, better enforcement, and crucially road design, are a part of this approach. In India, an added aspect should be improved licensing systems that teach drivers to respect and give way to pedestrians (and cyclists).

2 Jaspriya Bhasin vs State of NCT of Delhi & Ors

3 Only witnesses can prove charge of negligent driving

5 80% of pedestrians in Tamil Nadu meet with accidents at crossings, on pavements

6 The reforms needed to make walking in our cities safe,convenient and enjoyable