Agrivoltaics - a solution to the food-energy conflict

Agrivoltaics combine solar panels and plants to maximize the land use of a farm. In simple terms, it is the method of installing solar panels in agricultural land along with crops. Combining the production of photovoltaic power and agricultural crops in the same area enables light sharing and results in more freshness and lower losses caused by evaporation.

The availability of a large area of land is a prerequisite to the installation of solar panels. In order to generate 1MW of power,  the area of land required could be between 2.5 acres and 4 acres. This implies that purely investing in solar farms filled with hundreds or maybe thousands of solar panels instead of crops will have a serious impact on the agricultural output which the land could have produced. On the other hand, focusing on traditional farming alone can be relatively risky given its dependence on weather conditions and other externalities. This raises a dilemma since we need land to feed our ever-growing population and also satisfy their energy needs. Agrivoltaics can be seen as a plausible solution that can make the production of both photovoltaic power and agricultural crops lucrative. This not only increases the total productivity of land but is of economic benefit to the farmers.

Studies highlight that agrivoltaics increases the land use efficiency by over 60 Percent and that agrivoltaic systems can increase global land productivity from 35 to 73 percent!

The pictures above show three different ways to install agrivoltaics. The first picture (left) shows the panels installed between the rows of crops. The second one (middle) shows panels as a roof for the greenhouse and the third (right) shows panels at a height on the farm so that no area is lost for crops to grow.

Agrivoltaics over the years

The method of agri voltaics is adopted worldwide and has been a success. In 2004 agri voltaics was massively implemented in Japan, and subsequently developed in Asia and Europe.  Germany estimates that such structures would be profitable without government assistance by 2022. In India, this method has been used in aloe vera farms, vineyards, and a few other pilot projects. The Cochin International Airport (CIAL) has successfully implemented this method and has been growing vegetables below the panels and in turn, increasing their revenue.

The data about CIAL is below 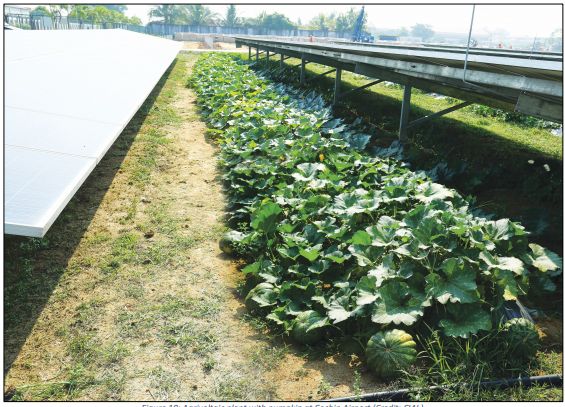 The pertinence of sunlight for the growing of crops is indisputable. But they do not require sun throughout the day. By peak afternoon, the plants reach their saturation point of sunlight absorption. Therefore, the incident sunlight after the saturation point is wasted. This wasted sunlight when incident on solar panels can be used to generate electricity. Studies have also shown that the shading of plants during the absorption period affects their growth rate. So a careful tracing will help optimize crop growth as well as electricity generation. Agrivoltaics also helps reduce irrigation requirements of crops, as due to shading the soil retains moisture, making this method especially suitable for drought-sensitive areas. Careful crop selection is also essential when implementing agrivoltaics.  For example, lettuce adjusts its leaf size for absorbing more radiation due to shading by the panels. So if the priority is to grow crops below the panels and not in the spacing between them, then shade-tolerant plants would be the best option.

The future of Agrivoltaics

Various researches prove that by calculating the Land Equivalent Ratio (LER), we can determine if the co-location of agriculture and photovoltaic (PV) would be profitable or not. The LER for the PV output is obtained by comparing the power output of the agrivoltaic system (AV) against a standard PV farm. LER value greater than 1 proves to be a beneficial idea.

Difficulties with setting up an agrivoltaic system

Solar panels experience a loss due to soiling ( dust accumulation), thus decreasing their efficiency. It is also observed that the irradiance loss varies with particle composition of soil and tilt angle. It was inferred that with a variation of tilt angle, the irradiance loss also varies. So while installing agro PV, an optimum tilt angle has to be obtained for the soil particle size . After installing solar panels in agricultural land, the presence of bigger soil particles in the air decreases due to the soil being bound by the plants. This consequently decreases soiling losses.

Since this idea is at a nascent stage, we need policies from the government side to promote its implementation. Few policy recommendations are given below.

As the world is in transition to clean energy, solar photovoltaics is considered to be the easiest and an efficient way to transition towards clean energy goals. But we need to take care that agricultural land is not misused for energy needs. Hence, creative ideas such as agrivoltaics which ensures co-location of panels and crops could be considered a suitable path to a sustainable future