Chennai’s water paradox: floods and droughts versus sustainability and ‘development’

The floods in Chennai has come as a serious warning from Mother Nature. The issue can be approached from various facets; its causes, consequences, the effect on people and how the city seems to have moved on. But is that it? Do problems come to us just so that we can rediscover our strength, capability and tolerance levels each time? My “tolerance” comes in quotes to highlight the significance of the word today as well as to how intolerance has become a bad term. Being proud of our strength is one thing, ensuring the city fares fine during the onset of the next North-Eastern showers is as important. This has been an impending issue, ignored since the 1800s.

So, who is to blame? Is there a single organization responsible for the stormwater and sewage drains in the city? What about the flood warning systems and disaster preparedness? To begin with, the city needs a dedicated agency for storm water management, that can plan, implement and control storm water drainage which appears to be a shared responsibility of the Corporation of Chennai, Public Works Department teaming with the Chennai Metro Water Supply and Sewage Board.

Chennai often dwindles on the fine line between water scarcity and floods every year. Somehow, these are attributed to the ruling parties and the hope  that acche din will follow soon. The city is gifted with a natural water system with the Adyar River in the south flowing towards the sea, in parallel with the Cooum River flowing in central Chennai and the Kosasthalayar River in the north, all intercepted by the Buckingham canal. The Cooum and the Adyar River are important lifelines of the city, with 75 lakes and 450 eris (tanks) flowing into them. While this maybe the ideal picture, human greed for development has led to most of them being choked by large infrastructure projects and residential towers while big industrial houses infringe onto the wetlands. Unauthorized and illegal construction exceed the number of urban poor living along these belts. Although the latter is the easiest to blame and evict as a part of slum rehabilitation/city beautification and flood victim rehabilitation programs. 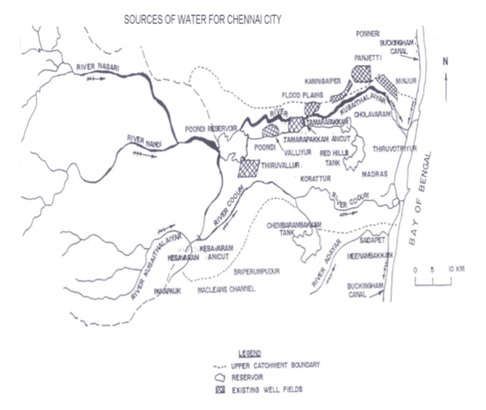 While the natural aquifers in the city are being depleted, the government plunges into desalination of seawater which is an expensive project. The degraded canals are polluted and heavily silted today,do not have the capacity to hold and transport the excess rain water received by the city every monsoon. The city’s urban road length is 2847 km while the storm water drain length is only about 855 km.Mark Selvaraj, an urban planning expert, was quoted saying that claims that during the last 5 years, the state has spent about 10,000 crore on storm water drains. Ironically, the money has gone to the drains.

Thus, in order to deal with a national (man-made) calamity such as this, we need to extend our assistance during troubled times. Disaster management in India is handled by the National Disaster Management Authority (NDMA) and National Executive Committee who acts as the executive arm of the NDMA at the National level, State District Management Authority at State level and District Disaster Management Authority for the individual districts. The departments dealing with Emergency Operations are the National Integrated Operations Centre (NIOC) at New Delhi, which is functional 24x7 and equipped with state of the art equipment, a back-up NIOC in case the main department is dysfunctional in adverse situations as well as Operations Centres at State/District level, National Disaster Response Force, National Disaster Mitigation Resource Centre, Regional Response Centre, State Disaster  Response Force, State Disaster Mitigation Resource Centre, and an Incident Command Team.

The Comptroller and Auditor General (CAG)’s report in March 2012 concerning Tamil Nadu’s disaster management systems, revealed that at least 14 out of the 59 early warning systems in Cuddalore and all the 30 systems in Nagapattinam, both districts that were badly hit by the 2004 tsunami, were not in working condition during the testing period. The Emergency Operation Centers were non-functional, the state has also not provisioned the District Disaster Response Funds Mitigation and Disaster Mitigation Funds at the State and District levels. More so, alarmingly, there was no dedicated staff for the State Disaster Management Authority.

Cut to November 2015, alert systems and warnings went missing through a marooned and wet Diwali that saw only more rains much to everybody’s despair. The city and its surrounding districts could not cope with the excessive rains and the resulting destruction, which could have been reduced to a large extent. A joint survey conducted by organizations such as Vettiver Collective and Citizen Consumer and Civic Action Group, several researchers and activists claimed that 95% of the residents were unaware of any warnings issued before the release of flood water from the Chembarambakkam reservoir which caused extensive damage to life and property, this does not seem surprising anymore.

The funds from the Central government, supplemented with available funds from  the state, left the poor with Rs. 5000 as compensation. The rich did not escape the effects of the torrential rains, although they had much less to deal with loaded bank accounts. The urban middle class did feel the pinch with no one to help. News reports claim that the floods resulted in an estimated loss of 50,000 crore to the country. The Chief Minister Jayalalithaa claimed to have requested the central government for 5000 crore to allocate 2.5 lakh each for 50,000 families who were left homeless after the devastation, which includes a 1 lakh contribution from the state government.

With all of this left behind, we can only wonder what would be the way forward. Will we figure a way to tackle the issues of governance, accountability and deal with the unregulated urban growth or wait for the 2016 monsoon to stir everyone’s life again?