A small amount of electricity (0.007A for three seconds) could kill a person. Second only to traffic accidents and drowning, electrocution was identified as a major cause of accidental deaths in India by the National Crime Records Bureau (NCRB). It takes 0.007A for three seconds. In 2019, NCRB statistics revealed that a total of 13,432 deaths in India were caused due to electrocution. In addition to electrocution, deaths and injuries caused due to electrical fires and short circuits were also registered at a whooping 2,184. It must be recorded that the aforementioned numbers reflect a 10% increase from the previous year i.e. 2018.

A recent study highlighted that in developing countries like India, accidental deaths caused by electrocution are common due to lack of adequate safety measures and a low level of awareness among consumers. On the one hand, electricity distribution companies need to focus on improving infrastructure. On the other hand it is equally essential that electricity consumers develop an understanding about their electrical appliances and take adequate measures to ensure electrical safety.

What is Grounding and why it is needed?

Grounding is the first step towards electrical safety. Grounding or earthing as its name suggests connects the electrical system, electrical devices and its metallic parts to the ground/earth through a thick conductor wire which has very low resistance. It is the process of providing a separate pathway that runs parallel to the electrical system’s hot and neutral wires. This pathway ensures that the current flows back to the ground in case of wiring failures. 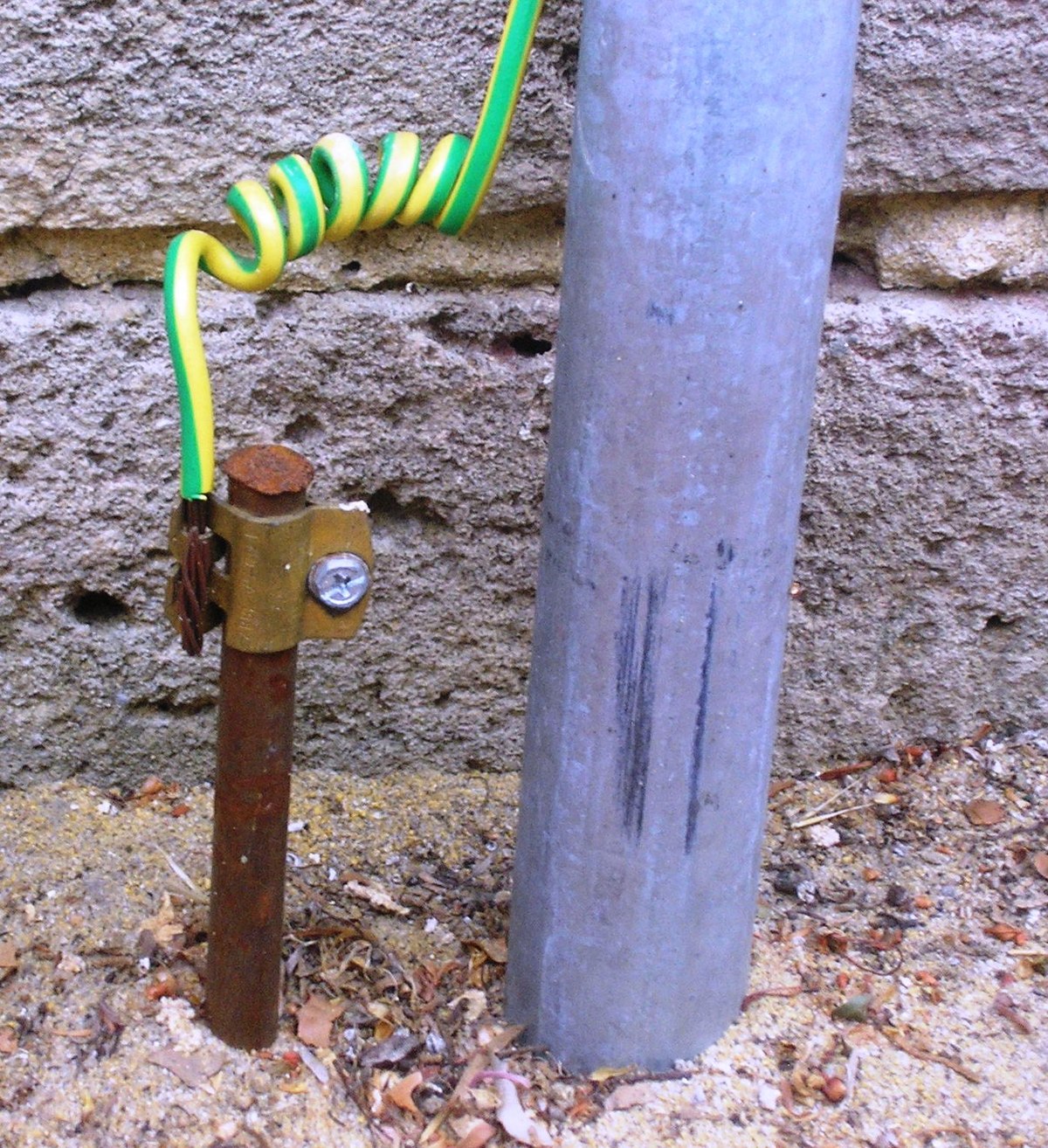 In case of an electrical surge, a lightning strike or any kind of damage in the electrical system, the metal components of an appliance will act as a conductive surface. This means that the person who comes in contact with the appliance could experience an electrical shock due to the excess current flowing in the circuit. If the appliance is grounded, excess electricity will be redirected to the ground thus ensuring electrical safety and avoiding accidents such as electrocution to the individual and electrical fires to the building.

There are two main types of grounding:

System grounding involves connecting the neutral wires in the house to the ground through a grounding electrode conductor (GEC). In this type of grounding the current carrying parts of the appliance(s) - i.e. neutral point of a circuit, a transformer, rotating machinery etc  are directly connected to the earth/ground. System grounding is done mainly for the purpose of protecting the appliances from electrical surges/faults.

The following figure depicts the neutral point from the electrical source being directly connected to the ground which is bonded to the casing in order to avoid electrical shock in case of system failure in the casing. 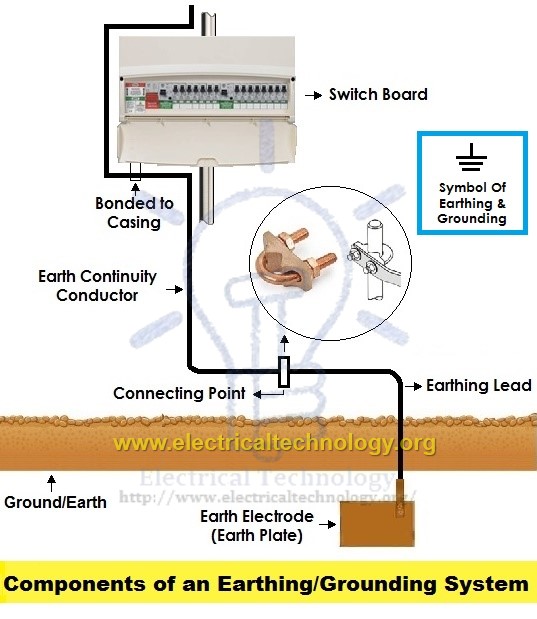 The following figure depicts a motor’s non-current carrying part connected to the ground through a wire. By this in case of any system failure the electrical surge or fault current is directly grounded and avoids current flow over the motor. 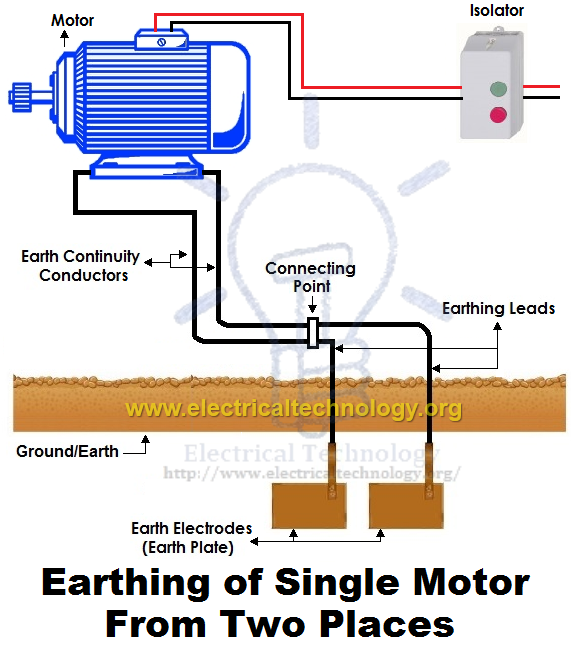 The process of grounding can be done in several ways depending upon the appliances in use. Below given are the various  grounding methods:

In this type of grounding, a plate made of either galvanised iron or copper is buried vertically at a depth of at least 3m/10ft from ground level.The earth pit is then filled with alternate layers of charcoal and salt to remove the chances of shock. Charcoal is an excellent conductor which can retain moisture for a long duration and salt increases conductivity. Together, both salt and charcoal ensure that any current leakage is passed to the earth as early as possible, thus, avoiding possibilities of electrical accidents. 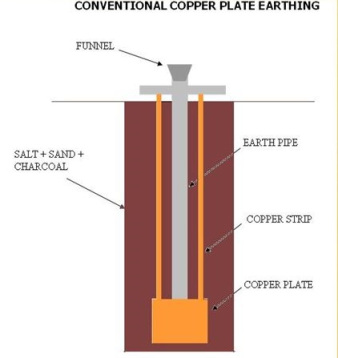 In this type of grounding, a galvanised steel pipe of 75 mm diameter, 10 feet long is  welded with 75 mm diameter galvanised flange with 6 holes for earth wire connection and is buried vertically into the earth. The  depth of the pipe is determined by soil conditions, but usually it should be 4.75m (15.5ft). This pipe must be electrically tied to the main service panel to provide a ground connection. When compared to other grounding procedures, pipe grounding is the most cost-effective. 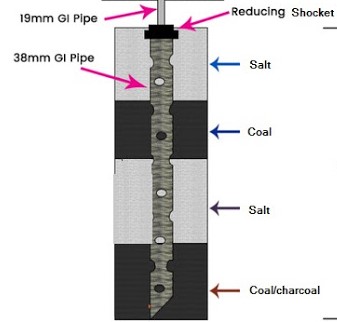 Rod grounding is largely  similar to pipe earthing. Instead of a pipe a galvanised iron or steel rod is buried upright into the earth manually or hammered inside the ground. This rod must be electrically tied to the main service panel to provide a ground connection.  Ground rods are simple, inexpensive and crucial to protecting the electrical system and its appliances. 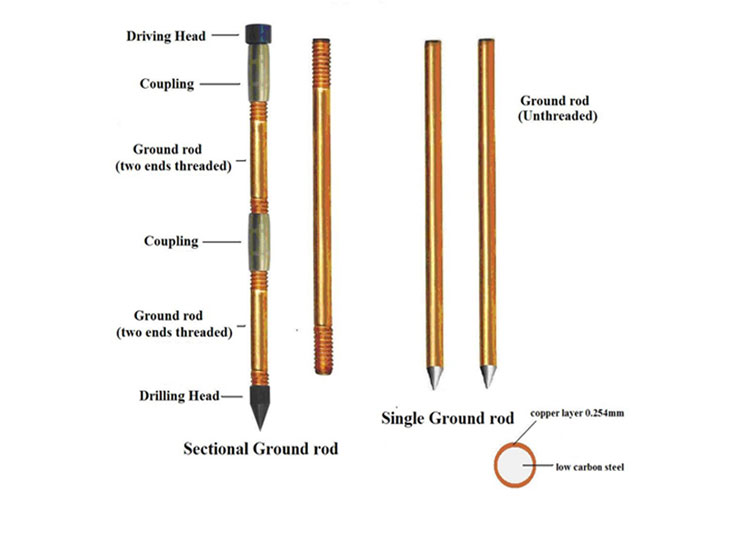 In this type of grounding, strip electrodes with a cross-section of no less than 25mm x 1.6mm (1in x 0.06in) are buried in horizontal holes with a minimum depth of 0.5m. If copper is used, the cross-section should be 25mm x 4mm (1in x 0.15in) and the size should be 3.0mm2 if it is galvanised iron or steel.

The advantages associated with grounding are listed below.

One of the important objectives of electrical safety is to ensure that there is no leakage of current from its intended path. To stop such leakages from occurring, consumers should focus on electrical grounding or earthing. Grounding is the first step towards ensuring minimal electrical safety for ourselves and our electrical systems. Every household’s electricity system should include earthing/grounding wire(s) that runs parallel to the system’s hot and neutral wires. This will act as an effective and safe pathway for excess electricity to flow back to the ground in case of wiring failures.

Is your home grounded properly? Well, this is a question only a qualified, licensed electrician can advise upon. Do not leave your safety and your appliances’ longevity to chance. Schedule an inspection of your electrical system and make sure that your homes are grounded properly. Improper grounding can result in greater risks and dangers. Hence remember to get them  checked at regular intervals.