In March 2016, CAG and Real Charitable Trust (RCT), a Chennai based NGO working with communities on health, solid waste management etc.,inaugurated a project with a long-term vision of revitalising the Madhavaram Truck Terminal (MTT) by working with city government officials, sanitation workers, truck drivers and owners, vendors, small businesses working within the terminal to improve the infrastructure and services related to drinking water, toilets, bathing, washing and waste management.

One of the aims of the project is to achieve a zero waste management in the terminal. Currently, six women waste pickers are involved in door to door collection, segregation of waste and upkeep of the place.  A series of awareness programmes is being conducted to create awareness on importance of waste segregation and its ramification on health. 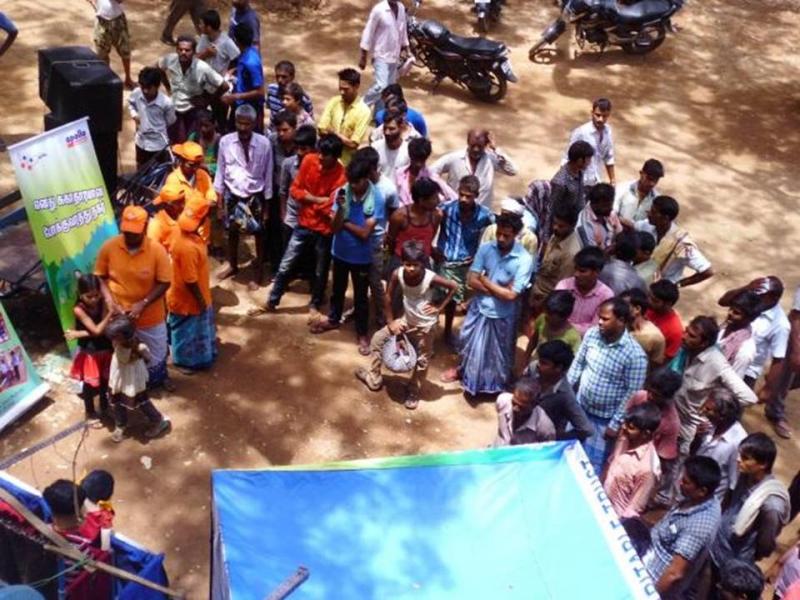 For a continuous dialogue with the community, two puppet shows were staged to convey the importance of waste segregation. The first puppet show held on March 31, discussed the ill effects of poor sanitation on health. The second puppet show focused more on waste segregation and personal cleanliness. For me, an interesting aspect of the puppet show was that it was bilingual - Hindi and Tamil. One interesting  aspects about Madhavaram Truck terminal is that one finds drivers, guides, owners and shopkeepers, from different states, speaking different languages. Most of them tend to slip into different languages during a conversation.  I have had the Tamil speaking annas trying to speak to me in Hindi to find out whether I can follow them or not. One of the guides[1],Manickam, remarked that a guide’s business in the terminal depends on the number of languages he/she speaks (I am yet to come across a woman guide/ truck driver/ shop keeper or transport owner at MTT!). I have heard comments from my Hindi-speaking friends about how Chennai is not really cosmopolitan in terms of people of different languages coexisting together unlike the other cities, and so I am constantly on a lookout to test this claim. So far, I have been unsuccessful. MTT could be an exception in that sense because their livelihood depends on people coming from across the country.

When the puppet show was being performed, I saw folks translating it simultaneously in Telugu for those who could follow neither Hindi nor Tamil. The puppet programme was short and it dwelt on the message of waste segregation. This message was decided by colleagues based on the feedback they got from the waste workers who are working there. 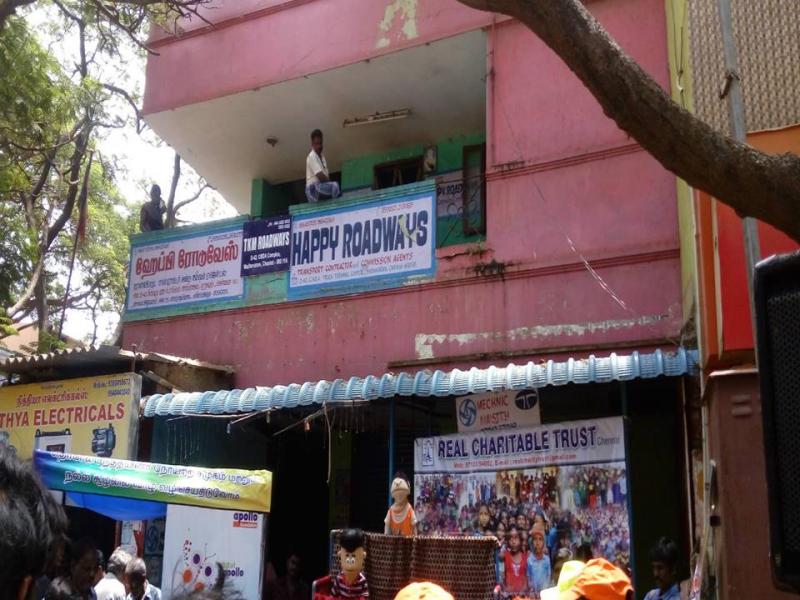 The puppet show team did a good job of holding the crowd for ten minutes despite it being a sunny day. A few people were watching the puppet show from distance and few from their balconies. When I  enquired about their opinion of the puppet show, three of them felt the message was clear and important. Ezhumalai, a guide and driver , felt that he was aware of the importance of segregating the recyclables separately. He agreed it is important to not spit on the waste but wondered what people would do if they are in a hurry. He was quick to add that Hindi speaking people only spit tobacco on the waste and the walls but not the locals. When I asked the same to one of our waste workers who is familiar with conditions there, she was of the opinion that though tobacco spitting is more predominant among non- Tamils than Tamils, she has seen Tamil men spitting too.

When I enquired about whether such awareness programmes makes any difference, Mukesh Kumar, a driver, said these are the messages which have been told to everyone from the time one is young. I was left with thoughts on how to bring about an intervention among the people who are familiar with the issue but who do not act on it. 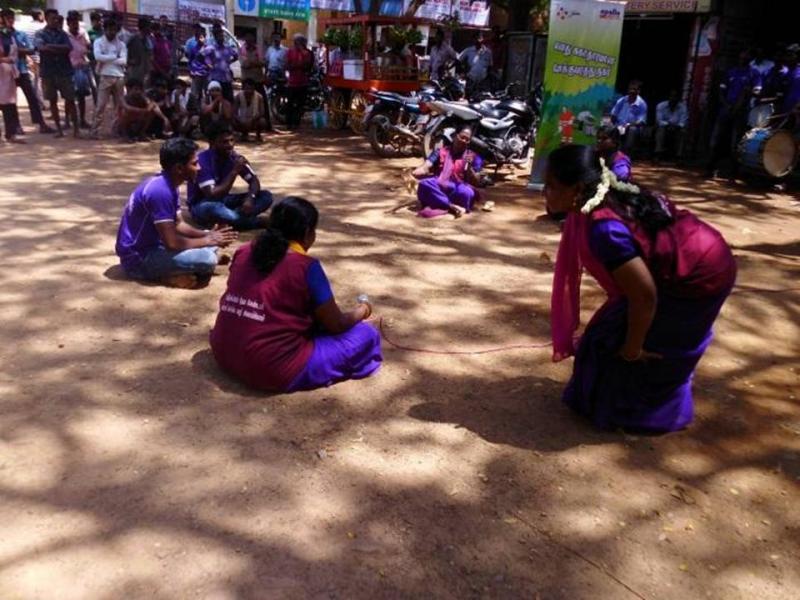 On World Tobacco day (31st May),  the team organised a street play in MTT. The Arunodhaya theatre group banging hard on their drums drew a curious crowd. They played songs and the drums were beaten according to the Madras thara local beat, an extremely catchy beat These beats drew a bigger crowd and I could see people were tempted to dance; a few of them did. I was tempted too! The performance, which lasted about 45 minutes, was a combination of songs, different folk dance forms and stories on various issues which affects our well-being and the audience, both young and old, seemed to identify with the messages in the play's stories and songs. The main theme of the play was personal cleanliness. I felt this play gave more opportunity to engage with the crowd for open dialogue. Vincent, a tobacco de-addict, shared his journey of how he gave up  tobacco. I felt this resonated more with the people there. They opened up and shared their experience of how they are familiar with the ill-effects of tobacco but how they are not able to overcome it. A truck driver I interacted with told me how he uses tobacco to overcome the monotonous long stressful drives. Mohan and Ashok, two  shop owners in MTT, felt the street play was more appealing than the puppet show.

On World Environment Day June 5th, among the other things, the team had arranged for a mime performance by Charlie’s Mime team, a group of young college students. The first performance was on water and air pollution, and the second on using dustbins. I could sense immediately that watching a mime was a very new experience for the people in MTT. Because of the costumes and their music, the group drew a huge crowd. People were curious to understand what was happening but I felt not everybody in the audience understood everything but the crux of the message was conveyed. When I enquired whether these efforts will bring a behavioural change among them, Ananth, a truck driver sheepishly grinned and said “If not every day, at least for a day we would remember this”

Three weeks, three different mediums of expressions on the same issues, different reactions.  I would like to go back to this place after a few months and enquire whether this kind of continuous awareness programs and engagement has brought any sustainable behavioural change.

[1] A guide helps the drivers from other states in finding the routes in Tamil Nadu and he might or might not accompany them on their travel. He is paid on a per day basis.