With emerging technological advances and increased dependency on electronic appliances, household energy consumption levels and demand for electricity have been steadily rising. Recently, Tamilnadu recorded a peak demand of 16,151 MW during the month of April 2019. It has been highlighted that the increased demand was mainly from domestic users and that it is expected to rise continuously in the coming years. Under such circumstances, energy conservation and use of energy efficient appliances will play a major role  in managing the demand and supply of electricity. The Government also introduced various schemes to promote energy efficient appliances like LED bulbs, tube lights, and fans, at subsidised prices. Apart from saving electricity, this will help consumers to cut down their electricity cost as well.

The focus of the initiative was to leverage on a  network of communities (1 BHK, 2BHK, 3 BHK, 3 BHK and above) in and around Chennai to serve a very specific purpose – motivate households to practice conservation of electricity, use energy efficient appliances and provide suitable recommendations that could be adopted to reduce consumption and expenditure on electricity. The program further sought to study the impact following behavioural change and the use of energy efficient equipments. 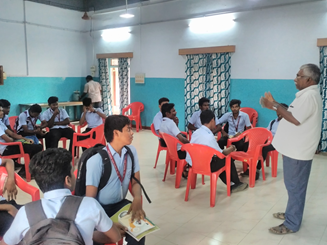 Above: Students being trained as stewards

Students from institutions such as Don Bosco Technical Institute (Joe Tech), Basin Bridge, Women’s Christian College, Nungambakkam and JBAS College, Teynampet were involved as stewards to promote the initiative. They were trained on energy efficiency, energy conservation and renewable energy like solar energy before undertaking the survey. 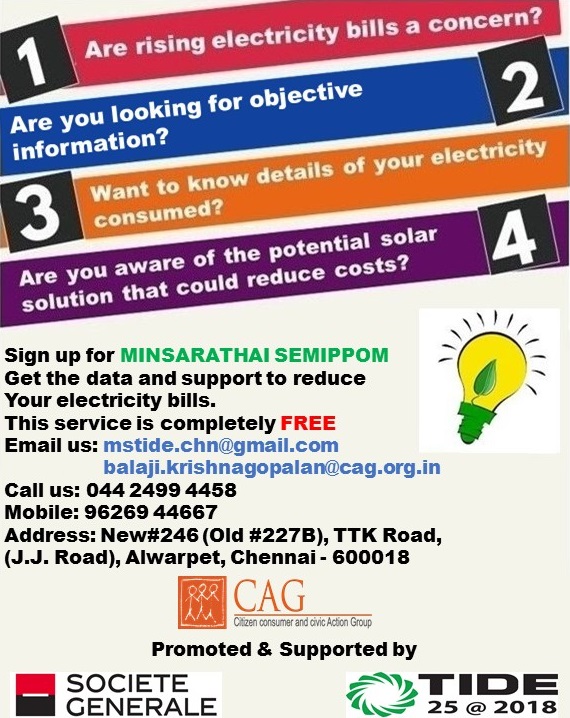 Above: Posters distributed to draw interest.

Stewards visited the Resident Welfare Associations (RWA) in their neighbourhood to create awareness and encourage the residents to participate in the initiative. Posters (in English and Tamil), which drew the attention of consumers towards their electricity bills, were distributed. Later, interested participants were identified and signed up for the initiative.

A survey was conducted to understand the energy consumption patterns of the households. The survey made inquiries into the number of electrical appliances in households, their usage patterns and consumers’ interest in renewable energy, among others. The participating households were also provided with neighbourhood averages that could help correct their individual usage. 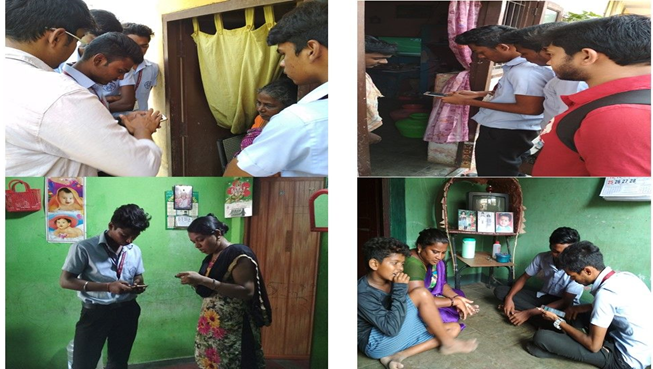 During the sign-ups, participants were advised to follow energy conservation measures through behavioural changes. For example, switching off appliances when not in use, making use of natural light and ventilation as much as possible, etc.

Further, a handbook was also given to the signed up participants to educate them about energy efficiency and energy conservation and also to promote the benefits of MS. The spread of sign-ups is given below and can also be found in the link. 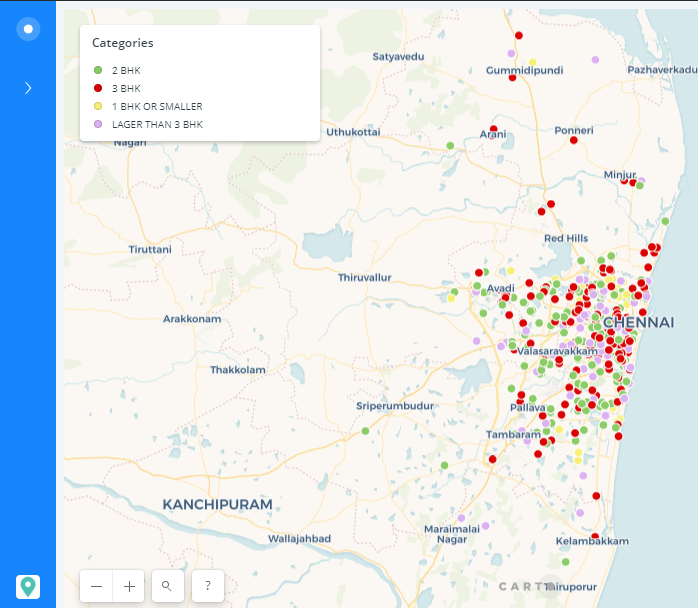 The booklets were given to nudge them to become more energy efficient. After a couple of months, based on the information received through the signups, CAG collected their 24 months historical consumption, based on which individual primary reports were prepared by TIDE.

Through the course of the sign-up drive, surveying and household visits, participants could be seen developing an increased interest in adopting energy conservation methods. There were several instances where participants’ feedback reflected that household consumers are willing and motivated to make behavioural changes to conserve energy.

It was observed that some of the participants had newly shifted/ occupied their houses. So, we couldn't calculate their historical consumption pattern. To strengthen this, we collected feedback from participants while distributing the primary reports. This included the staying period in the house, inclusion and exclusion of electrical appliances.

In a short period of time, with 650 participants, we were able to create awareness about energy conservation and efficiency. As a result, we were able to reduce the overall power consumption by about 7%. If every individual continues to conserve power we will be able to reduce the gap between demand and supply in the electricity sector. This will also help the Government to supply 24*7 electricity to all.