Agriculture is one of the major energy-consuming sectors in Tamil Nadu owing to heavy dependence on groundwater for irrigation purposes. Solar photovoltaic water pumping technology is one of the several global initiatives in sustainable agricultural practices, which is a reliable and economically viable alternative to electric and diesel pumpsets in irrigation sector (Chandel et al., 2015).

SPV systems convert solar energy into electrical energy via the Photoelectric effect. This occurs when photons coming from solar radiation interact with the materials that have a conductive surface (e.g. silicon cells), and the electrons in the material move from one conductive layer to another leading to the generation of electricity. The SPV panels are connected to a motor that converts electrical energy (supplied by the SPV panel) into mechanical energy, which is then converted into hydraulic energy by the pump.

A schematic diagram of an SPV system is given in the figure. 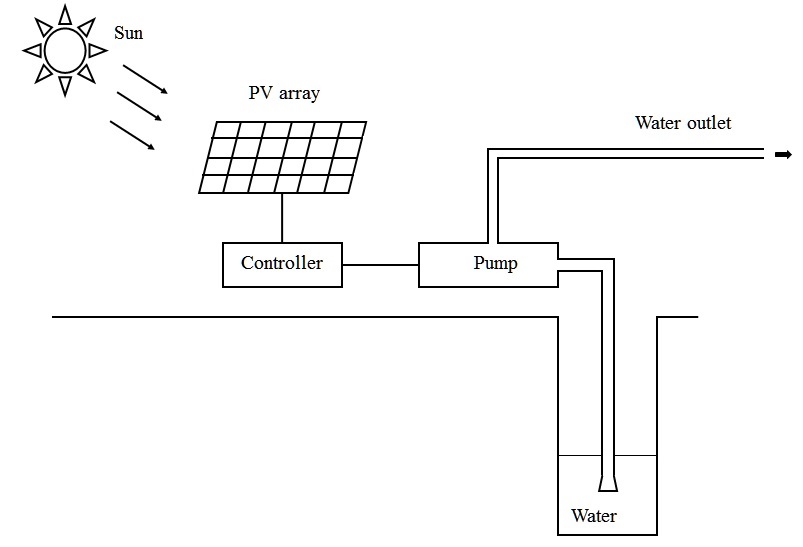 SPV pumps can be majorly classified into four types:

i) Provision of solar-powered pumping systems

The main objective of the scheme was to ensure energy security to the farmers to meet their irrigation needs. All farmers, whose agricultural lands are provided with good irrigation sources such as bore-wells, open wells or any surface storage structure along with shade-free space near the source for installation of solar panels are eligible for this scheme (Agricultural Engineering Department, Tamil Nadu). The farmers were permitted to install more than 5HP solar pumps also, however, the subsidy was limited to 5HP only. Totally, 2295 numbers of 5 HP off-grid solar water pump sets have been installed in Tamil Nadu at a total subsidy of INR 8076.80 Crores as of March 2018 (Energy Policy Note, Tamil Nadu).

Issues faced by the farmers

CAG often interacts with the agricultural community through outreach meetings and observes the problems faced by them regarding their energy needs. Based on the observations, several concerns were identified. Firstly, farmers were largely unaware of the point of contact for information regarding the scheme and related processes. Secondly, most of the farmers were not willing to avail this scheme, since the scheme mandates farmers giving up their existing connection (which is available free of cost to farmers in Tamil Nadu). Finally, while there are lakhs of applications pending in the state, the scheme provided only 1000 numbers of pumpsets in a year (Agricultural Engineering Department, Tamil Nadu).

On the other hand, there are chances for over-extraction of groundwater due to the availability of plentiful power supply through SPV pumpsets. Awareness on judicious utilisation of groundwater for agricultural purposes and the importance of groundwater conservation seems to be lacking among the farmers.

The scheme was announced by the Union Government during the Budget session in 2018 and was approved by the cabinet after a year(February 2019). The objective of this scheme is to provide the agricultural community with advanced technology to generate power across India. Provision of solar agricultural pumps is a major component of the scheme. Both on-grid and off-grid solar pumpsets will be provided to farmers based on their requirements. The scheme targets to install 17.50 lakh standalone (off-grid) solar-powered agriculture pumpsets and 10 lakh grid-connected, solar-powered agriculture pumps all over the nation (MNRE). Table- 1 provides a comparison between the KUSUM and the older scheme. 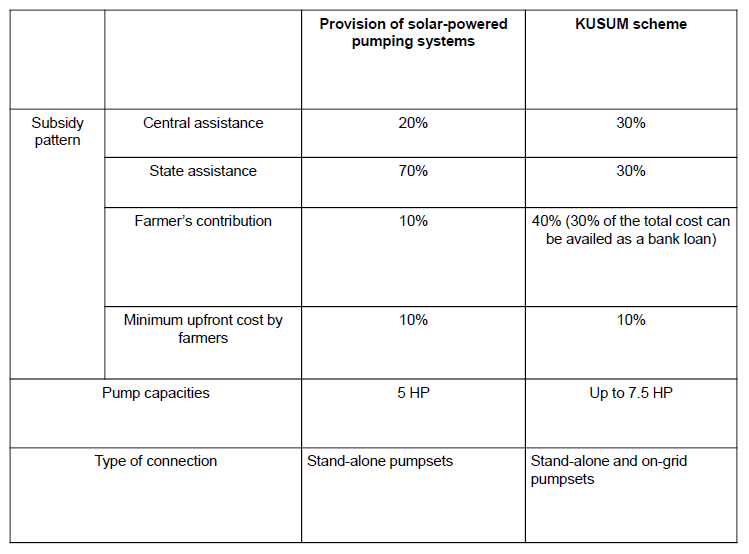 SPV Agricultural Pumpsets can be used as an efficient and greener alternative to electric and diesel pumpsets. This article focuses on providing a basic understanding of SPV Pumpsets and on government initiatives that support them. In the past, government schemes supporting SPV Pumpsets have faced several challenges in reaching the farmers. Even though the KUSUM scheme largely overcomes the challenges of the earlier scheme, the subsidy pattern remains to be a major hindrance due to higher farmer’s contribution in comparison to the earlier scheme.