Reduction of road crashes and fatalities at the state and district levels has been prioritised and   led by a series of steady efforts channelized through institutional changes, data-driven approaches and improved law enforcement in Tamil Nadu since 2017. Therefore, it's crucial to understand the road safety scenario, its progress, success factors and the challenges in implementation at the decentralised district levels to sustain road safety achievements. CAG, in collaboration with Mr. Ramesh from Tiruvarur and Dr.Ganapathy Subramanian from Tirunelveli conducted a  webinar in the last week of September 2021 titled ‘Road Safety in Tamil Nadu - Perspectives from Tirunelveli and Thiruvarur Districts’, to facilitate understanding of the various challenges faced in the 2 districts by the government and how key stakeholders - the government departments, Civil Society Organisations (CSOs), and the general public - can work together to build on the State’s efforts in contributing to road safety. 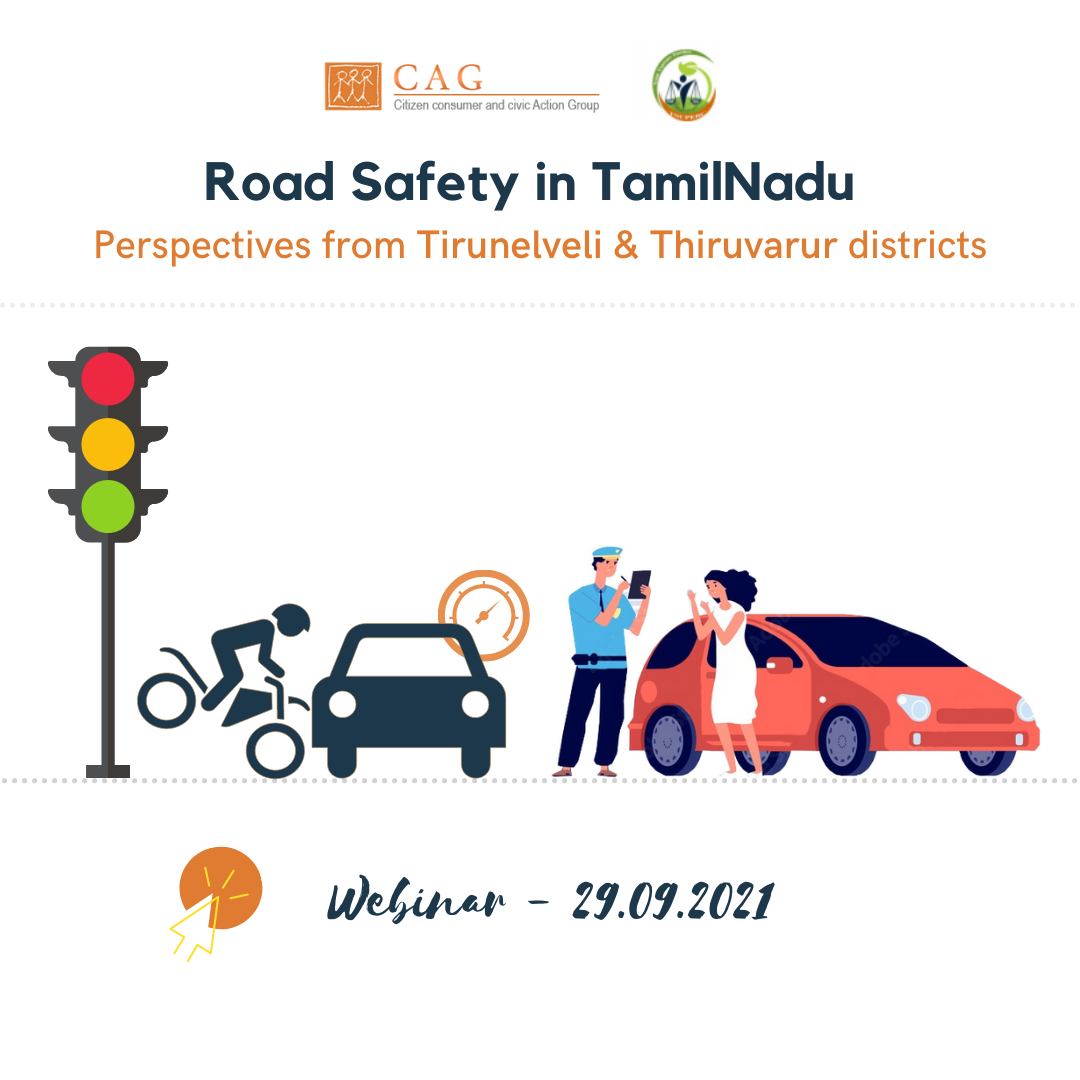 Various district level officials addressed the gathering, highlighting the road safety initiatives taken at the district-level and the underlying challenges hindering a positive change. The key speaker, Mr. Soundararajan, representative of the Collector of Thiruvarur, highlighted four focus areas that require work to improve road safety in the district, namely, non-compliance in terms of wearing safety gear (i.e. helmets and seatbelts), distracted driving owing to the usage of mobile phones, pollution and other environmental concerns increasing with the growing population and traffic, and improved road design and engineering. He also emphasised that increased awareness is an essential tool to promote a paradigm shift and consider road safety as an everyday focus. Mr.S.Alagirisamy, Regional Transport Officer of Thiruvarur, noted that road fatalities in Thiruvarur amounted to 10 per month and almost 90 per cent helmet non-compliance was observed in motorists. Speeding on curves was also identified as a reason for increased fatalities. “The public carry helmets to escape penalties rather than actually wear them;Negligence and fear of law has curbed the understanding of the main purpose of road rule compliance as a significant safety measure”, he said. He also highlighted that 4997 licences were suspended as per the Supreme Court guidelines owing to ‘drunk and drive’ cases in the past year. Shedding some light on the district’s efforts so far on road safety, he said that awareness campaigns with schools and colleges were regularly undertaken and monthly review meetings have resumed post-COVID to ensure road safety action. Interdepartmental coordination to analyse and identify reasons for crashes in terms of poor road engineering and lack of a safe infrastructure was stated as an effective measure to help reduce crashes.

In the case of Tirunelveli district, Mr.S.Vinayagam, Regional Transport Officer of Thoothukudi, who had served as the Motor Vehicle Inspector of Tirunelveli in the past spoke at length about the challenges regarding traffic violation control in Tirunelveli district.”There is difference between lack of concentration and diversion of concentration. Using mobiles while driving is illegal,” he said, highlighting how easily people discount the legal consequences. He also stressed that juvenile driving is a growing issue. As next steps he advocated for training and awareness on the licensing process and traffic violations so that the public can become more informed on preventive measures, overcome their fear and misconceptions surrounding road discipline and streamline their behaviour. Following this, Mr.Mariraja, Additional Superintendent of Police, Tirunelveli, spoke on how adopting cycles and public transport as a primary mode of transportation should be encouraged among youngsters and children. He said “We have to entertain preventive measures and not curative measures”. He also called for the general public and the government to come together to reduce speeding and carelessness of drivers, promote a conscious reduction in manufacture of high speed vehicles, and encourage motor vehicles use for essential purposes alone. He summed up the necessity of having road discipline by saying that every citizen should remember, “If a crash happens to you, there is a negative health consequence. And if you contribute to a crash, there are legal consequences”.

Mr. Chandrasekaran, Regional Transport Officer of Tirunelveli noted that the district has seen a 40 per cent reduction in crashes due to increased awareness and enforcement. Giving an example, he said that cases were booked for offences related to non-wearing of safety gear (helmets, seatbelts), speeding, drunk driving etc and permanent suspension of licences were carried out for repeated offences. A regular press release regarding suspended licences is also on the cards to ensure transparency, he highlighted. Highway safety is also being considered to reduce fatalities of people crossing the roads in rural areas through provisions of increased lighting, surveillance by CCTV and appropriate signage, he said. The session was concluded by Mr.S.Senthilkumar, Police Inspector, Thiruvarur who emphasised on being aware of laws and not hesitate to help when you see a road crash happening - rather reach out and be a Good Samaritan.

Significant takeaways include, the need for increased focus on road rules and discipline as the driver’s fault is the main reason for crashes, modifying driving habits according to road and weather conditions and increased awareness for the age group 18-24 as 80 per cent of road crash cases registered are of motorists belonging to this category. The need of the hour is a set of comprehensive rules pertaining to vehicle manufacture that should be formulated to address collectively the concerns of road, speeding, environment and public health safety.

The webinar witnessed an active participation by students and the general public, with participants expressing their support to improve enforcement, awareness and road infrastructure through their comments. The event also received good media coverage and set the tone for CAG’s plans of engaging with the District Road Safety Committees in Tamil Nadu. It also served as a precursor to facilitate regional implementation of MVAA and  improve the road safety scenario in various districts of Tamil Nadu.