On the third day of the four-day Break Free From Plastics meeting, we started with an overview of the link between climate, oil and plastics. That the extraction and burning of fossil fuels, such as oil, gas and coal, leads to carbon emissions, which have caused a rapid change in the climate is well established. But what is the link between plastics and climate? If you create a venn diagram between the two, the overlap that you will see is fossil fuels. What the industry will tell you is that plastic product lifecycle consists of extraction, production, use, end of life and recycling (Figure 1).Plastic feedstock is obtained from oil and gas extraction, and the chemicals derived include benzene, polyethylene, polypropolene, hydrogen sulfhide, carbon monoxide and others. However, what the industry will not tell us is how these chemicals are present in the plastic products that are ubiquitous and get released into our land, air, and water (Figure 2). Single use plastics, such as bottles for water and other beverages, cups, cutlery, plates and bags, are rarely used for more than a few minutes and are disposed in oceans and landfills. They release these chemicals back in our environment, causing major climate disruption. 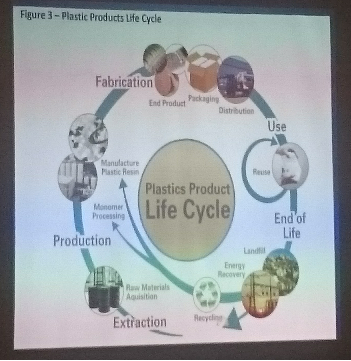 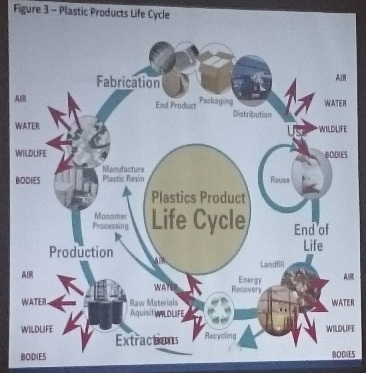 We also had the chance to look at four key problems and an opportunity to deep-dive into one of them. First, we were introduced to international conventions by Marianne Lloyd-Smith from IPEN and Carroll Muffett, from CIEL. They briefly took us through the various international agreements that regulate the accumulations of toxics in the marine food chain and the stewardship of materials used. These include the Basel Convention, which aims to ‘protect human health and the environment against the adverse effects of hazardous wastes’, Stockholm Convention, which is ‘a global treaty to protect human health and the environment from persistent organic pollutants (POPs)’ and the Strategic Approach to International Chemicals Management (SAICM), a ‘policy framework to promote chemical safety around the world’. They urged us to consider that it was increasingly likely that an international agreement on marine pollution will move forward and to work in our countries to expose industry influence in the decision-making.

The second problem we were introduced to was bio-based materials by Beverley Thorpe from Clean Production Action (CPA). Bev prompted us to think about what are the feedstocks for plastics and their impacts, whether plastics could be safe or hazardous, and whether there is an end of life of plastics. In contrast, we are beginning to see some bio-based innovations, such as mycellium and PHA biopolymers. She left us with the question about what a good or bad bio-based material would look like.

The third problem and solution we discussed was by Monica Wilson, from GAIA US and Canada, and Lakshmi Narayanan, from Swachh KKPKP Pune who spoke about the importance of organising informal waste pickers and zero waste cities. Last, but not the least, we had the chance to hear about circular economy from Joan March, from Zero Waste Europe, and Jamie Rhodes, from the Upstream Policy Institute. I was able to join the deep-dive conversation on this conversation. The main insight was that it was a misleading term in that it conveys that producers would get the right to pay to pollute. Moreover, there are several challenges in enforcing these, particularly in the context of weak institutional structures and powerful producers. In the US, EPR has focused on collection, not redesign. In the European Union we see that producers have too much flexibility and the next step would be to define the scope and set targets for plastic reduction.

We also heard from Bobby Peek and Niven Reddy, from groundwork. groundWork is a non-profit environmental justice service and developmental organization working primarily in Southern Africa in the areas of Climate & Energy Justice, Coal, Environmental Health, Global Green and Healthy Hospitals, and Waste. groundWork is the South African member of Health Care Without Harm and Friends of the Earth International.