From being a signatory to the Brasilia Declaration in 2015 to reaffirming its commitment to reducing road crash induced injuries and fatalities by 50 percent under the United Nations’ Decade of Action for Road Safety 2021-2030, India has been taking a raft of initiatives to improve road safety. Nitin Gadkari, the Union Minister for Transport and Highways in a recent press conference on making vehicles safer highlighted that India has been consistently working on the 4 Es of road safety viz. Education, Enforcement, Engineering and Emergency Care. 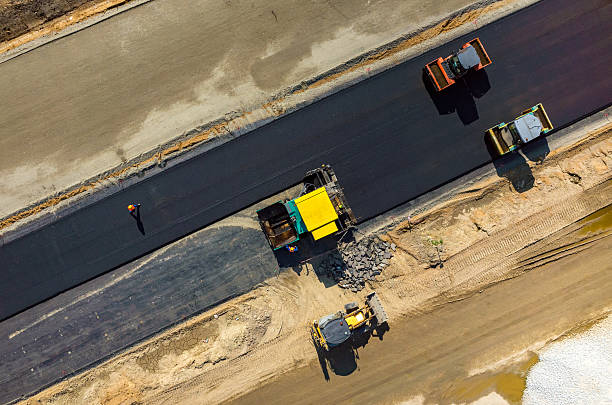 None of the above initiatives can be achieved without adequate resources i.e money. With the Union Budget being presented recently, it is a good time to look at how much importance road safety has been given. Are we putting the money where the mouth is or is it largely all talk?

The Union Budget clearly focuses on amplifying economic growth via an integrated planning approach to expand infrastructure and connectivity through the newly announced PM Gati Shakti Project. It is not surprising that the government wants to boost the economy, especially as we come out of the COVID 19 pandemic. Road development is an area of work that spurs economic activity, generates employment and has a multiplier effect on various sectors. Therefore, an increase in investments for development is inevitable.

However, in working towards more economic growth, we must not ignore the important aspect of safety of the roads. This includes the quality of planning, execution and maintenance of these services.

India has the second-highest road density and accounts for the highest number of road crash fatalities in the world. According to the report by WHO on Traffic Crash Injuries and Disabilities: The Burden on Indian Society, India accounts for 11 percent of the global deaths due to road crashes and this leads to a significant impact - socially, economically, and environmentally. It highlights the alarming cost of crashes (i.e. property damages to vehicles and other objects, infrastructure expenditures to prevent crashes, loss of employment and income of the victim, Emergency Response Services, victim treatment and compensation) as Rs.5.96 lakh crores viz. 3.14 per cent of gross domestic product (GDP).  It doesn't stop with the monetary losses. The emotional toil of losing a loved one, physical suffering, reduced quality of life and fear of a crash danger are uncompensated add ons. This reinforces the fact that road safety should be prioritised and allocated adequate money given the rapid development of road works in India.

A pressing need to rethink our priorities

A look into the Union Budget 2022-2023 shows that  the Ministry of Road Transport and Highways (MoRTH) received a tremendous hike of 68 per cent in its budget allocation for the year 2022-2023. Almost all of the Rs 199107.71 crores allocated have been earmarked for investments in National Highway Authority of India (NHAI), expansion of road networks and other development works such as roads and bridges. We find that Road Safety receives a meagre 0.26 per cent of the investments in highway expansion. In comparison, the US Federal Government spends USD 2.7 billion on road safety, which is 6 per cent of its total expenditure on highways. 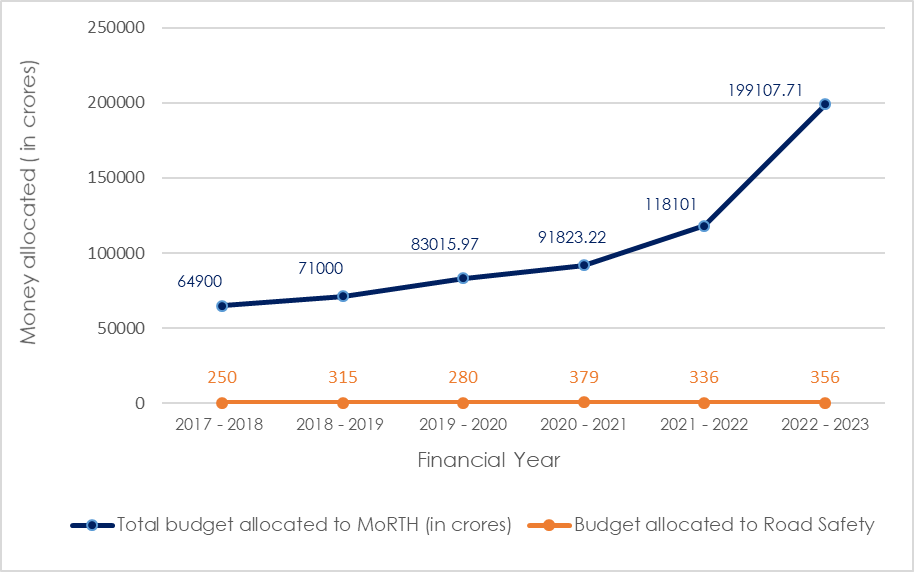 The statistics of the past years’ budgets shows us that until the financial year of 2017 “Road Safety Works” was always subsumed under some other header of the budget document. It was only in the budget document of 2017 that it was recognised as a separate category. Though this is a commendable first step, the sad reality is that Road Safety has always received stepbrotherly treatment in allocation, as indicated in the graph.

To understand the magnitude of the concern and the need for an adequate budget allocation for road safety one needs to be aware of the different layers of road safety management. Firstly, the government has made a good start by updating the national law; the Motor Vehicles Amendment Act, 2019 thus establishing a strong institutional framework which aligns India with global best practices. However, to change the ground reality of India losing 1.5 lakh lives on roads every year due to crashes, we need to channelize money towards proper implementation of the law. Primary provisions of the law, which includes establishment of the National Road Safety Board (NRSB), to facilitate technical assistance for central and the state governments, should be translated from paper to reality through a well-defined road safety budget.

In addition to this, the “Safe Systems' Approach as laid out by the UN Decade of Action for Road Safety 2021-2030 gives us a clear picture on where to channelize monetary resources, for improving road safety. As per the approach the five major streams of investment to improve road safety are safe roads; safer vehicles; safe speeds; safer road users; and post-crash care.

The minor heads mentioned under road road safety allocation so far have always been limited to ‘Research, Training, Studies and Other Road Safety Schemes’ and ‘Scheme on Women Safety’. It is important that the appropriate budget heads are added as per the areas identified above in order to effectively implement the road safety measures announced by the centre.

The expansion of road networks should be seen as an opportunity by MoRTH to increase its focus and spending on Road Safety. This must be done to ensure that development of road infrastructure does not come at the cost of lives and other socio-economic burdens.