Cleaning Chennai’s Waterways - One Detailed Project Report at a time

A WhatsApp forward came the other day. The provenance was unknown and information scanty. It consisted of an image announcing a meeting under the aegis of CRRT (Chennai River Restoration Trust, a government-owned trust) and TNUIFSL (Tamil Nadu Urban Infrastructure Financial Services Ltd, a Public Limited Company). CRRT aims to develop and implement plans to restore natural resources, such as waterways and waterbodies, with a view to mitigate pollution while TNUIFSL works to mobilise the capital market to finance urban infrastructure projects.

The meeting was labelled “Restoration of the Buckingham Canal within the Chennai Metropolitan Area from Ennore Creek to Muthukadu - Preparation of the DPR”. A venue, date, and time were provided. There was no indication if this was open to citizens or if any specific stakeholders had been invited, neither was an agenda given. 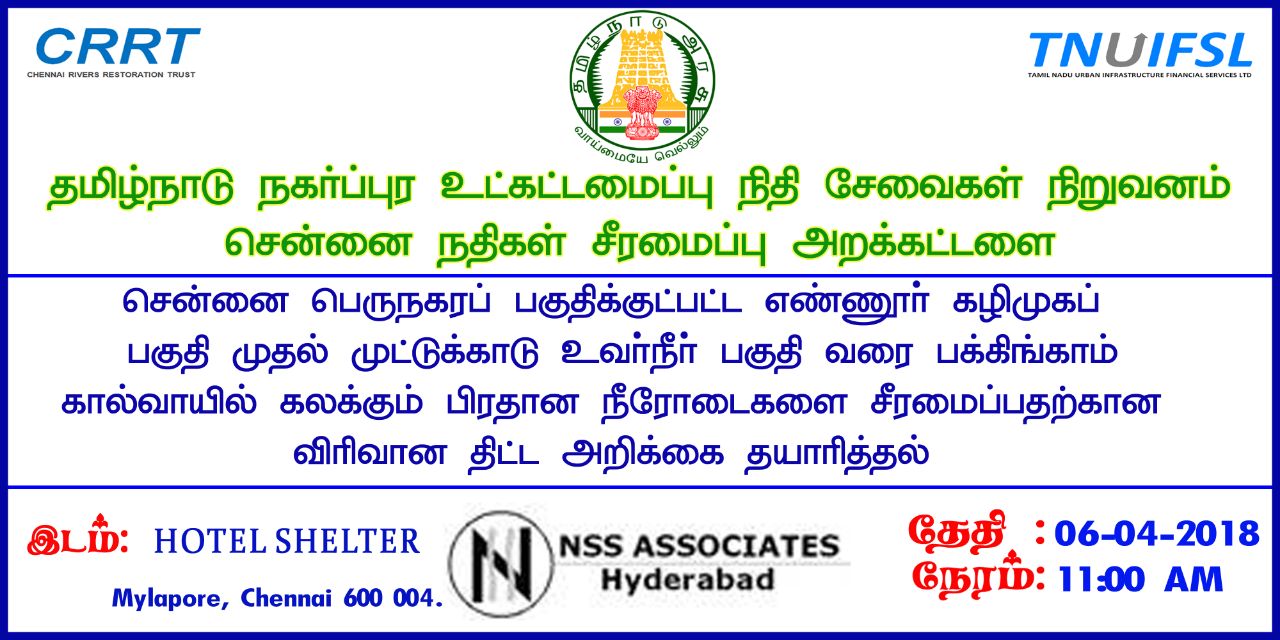 The meeting venue was about 100 metres from the Buckingham Canal - very apt, I thought. After quite a delay - we waited for Greater Chennai Corporation officials to join us - the meeting began with a presentation by NSS Associates, a Hyderabad-based consultancy in urban planning, environmental engineering etc with a technological solutions focus.

The presentation largely consisted of facts - the length of the canal, number of families living on its banks, houses on its banks and so on. Then came a brief list of proposed interventions to restore the canal - desilting, diversion of raw sewage (currently being dumped in the canal) to Sewage Treatment Plants (STPs) so only treated sewage is let out, relocation of encroachments, dredging to deepen the canal, as a flood risk mitigation measure, and of course, plant greenery on the banks. There was also mention of erecting chain link fences to deter dumping of municipal solid waste and construction debris in the canal. The estimated cost was given as Rs 61,500 lakhs.

The floor was then thrown open to comments. Of the 20 people gathered, questions and comments came from a grand total of 4, including yours truly. So, this is what I gathered from the ‘discussion’.

No time frame had been given. When asked, we were told that would be given in the DPR (Detailed Project Report) in a few months time.

An official from the environment department asked if earlier studies/projects to clean the waterways had been looked at, their reports studied and lessons learnt incorporated. The answer was yes we will and then changed to yes we have.

This will be done to remove all the muck that has accumulated over the years. Muck from the raw sewage, sand and of course solid waste and construction debris. This will also serve to widen and deepen the canal, improving its floodwater holding capacity, although the canal was not built for that purpose. The question that popped up was where would all the dredged material go? The consultants responded that it would be dried and the compostable waste, composted and the rest landfilled.

Chennai though does not have a landfill. It has dumpyards- in particular the Pallikaranai marsh and the Kondungaiyur dumpyard. This, it was pointed out, rather defeats the purpose. The buck was then passed on to the government.

The presentation said that sewage outfalls would be plugged and diverted to STPs. So only treated sewage would be discharged into the canal. But Chennai’s STPs are far and few between (for the city’s size and now with the expansion of the city limits) and those that exist are non-functional or function sub-optimally. Often raw sewage just goes in and out of the STP without getting treated. The answer - the Government (them again!) will construct new STPs.

Encroachments, we were told, would be removed/relocated. On hearing this, a journalist raised the point that the MRTS train system is a major encroachment on the Buckingham Canal. The presenter noted that again this was a policy decision taken years ago (to build the train system on the canal such that it hinders the already limited flow of the canal) and nothing could be done about this. However, encroachments on revenue land, where possible, would be addressed. Subtext - slums would be relocated. And no doubt it would be to the favourite dumping - sorry - relocating grounds - the Pallikaranai marsh.

By this time there seemed no point in talking further. The participants dispersed for lunch that thoughtfully came with bottled drinking water. These would no doubt find their way to, where else but Pallikaranai or the ocean.