Citizen consumer and civic Action Group (CAG) conducted a Consumer Guidance Seminar (CGS) on Banking Services on February 7, 2018. The seminar comprised of four sessions - The first session dealt with the following question: Are NPAs drivers behind the bank charges imposed on consumers?; the second session was on “Financial Resolution and Deposit Insurance (FRDI) Bill”; the third session was on “Effectiveness of RBI Guidelines issued in consumer interest” and the final session was on “Digital Transactions” How safe are we?”. This is the first of the four-part blog series on the seminar. 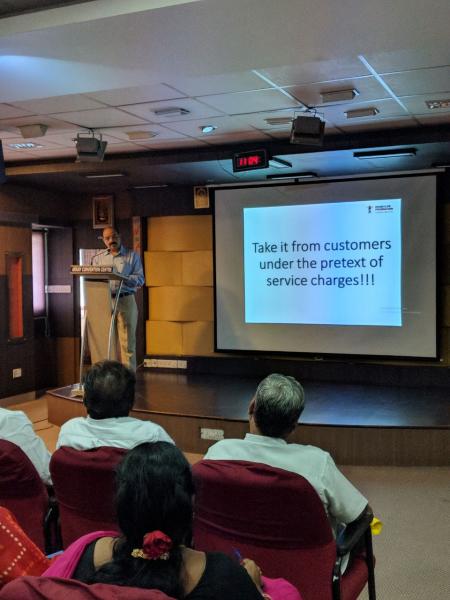 “Are NPAs the drivers behind various charges imposed on the consumer?” (Part I)

Many of us strongly believe that while on one hand banks declare NPAs and write-off crores of money borrowed by big corporates and on the other, they try to compensate this loss by imposing various charges on consumers. As we have seen in the last few years, there has been a steady increase in the number of charges imposed on consumers by banks. Speaking from this point of view, we had a session by Mr. Yogesh Sapkale, Deputy Editor, Money Life. He anchors three free helplines related to tax, credit, and legal issues and responds to a host of other queries. NPAs stand for “non-performing assets”. Loans which are not recovered are treated as NPAs. Mr. Sapkale gave examples of big corporate heads borrowing huge sums of money and fleeing the country and the subsequent struggle faced by banks to recover the money.

While this was so, banks have not only steadily increased the existing charges on services provided to consumers, but have also introduced new charges, thus inconveniencing the common man to a great extent. New charges include ATM services, inter-bank transfer charges, cheque book charges, SMS services, charges for cash withdrawal from counters and so on. Thus, in Mr. Sapkale’s view, banking is no more a service but perhaps a business as they seem more concerned about profit and loss statements. He spoke about “Interest Spread” which is the difference between the savings account interest and the loan interest. It explains the difference in the money that banks earn as interest from loans and the interest that banks pay as interest to deposit holders. The interest earned from loans is far more than the interest paid and therefore this spread is more than sufficient to render all services free of cost to consumers, said Mr. Sapkale. Section 35 A, of the Banking Regulations Act 1949, empowers Reserve Bank to give directions to prevent the affairs of any banking company being conducted in a manner detrimental to the interest of the depositors. Mr. Sapkale added that Money Life is filing a Public Interest Litigation in this regard and will appreciate the support of all bank customers from across the country.

Next, we had Mr. Badri, Chief Advising Officer of Noble Institute for Bank Research, Mamallapuram, Enquiry Authority Union Bank of India and IDBI Bank, and Chairman of Canara Bank Retirees’ Forum, speak on the topic. Being a banker, he intended to counter all the questions raised by Mr. Sapkale. He said that there were no research papers to prove the link between the NPAs and the charges imposed on consumers and asked if anyone in the audience had come across any such research papers. He pointed out that as per the master circular of 2015, RBI has laid guidelines for banks on fixing charges. It emphasises that the charges levied must be reasonable. He spoke about the existence of Banking Codes and Standards Board of India (BCSI), a body which protects the interests of the customers. As per the Citizens’ Charter of banks, banks should inform customers regarding the changes in the interest rates through a chosen mode of communication. They fix the charges only after approval from the board. Therefore, according to him, there were checks in place and RBI and banks were taking all efforts to protect the interests of consumers. But the participants of the seminar opposed and argued with the speaker against unfair services to the consumers. An ex-banker said that despite him being an ex-employee of the bank, the service meted out to him was poor and the officials were quite unresponsive.