Plastic - a magic or tragic material?

Man-made debris is found in marine habitats throughout the world, from the poles to the equator, from shorelines and estuaries to remote areas of the high seas, and from the sea surface to the ocean floor. It has clogged our rivers and lakes, and choked the life of these ecosystems. Animals and birds mistake them for food, sometimes choking or having their digestive tracts blocked or torn. Even we humans ingest microplastics through the air we breathe, the water we drink and the food we eat.[1]

Global plastic production has increased steadily and has reached 320 million tonnes a year in 2017. Plastic is widely used in the packaging of food and household products. In addition, it is used in construction, electrical and electronics, automobiles, textiles, medical, furniture, among countless other products. Plastic in the form of microbeads is also use in certain products, such as toothpaste, facewash, and detergents. The material can be moulded to endless shapes and sizes. It is light and stable. Yet, once moulded, it cannot be reused without chemical processing. Reprocessing plastic is costly, while virgin plastic is relatively cheap. As a result, few plastic products are designed to last and are in fact, predominantly designed for single use. 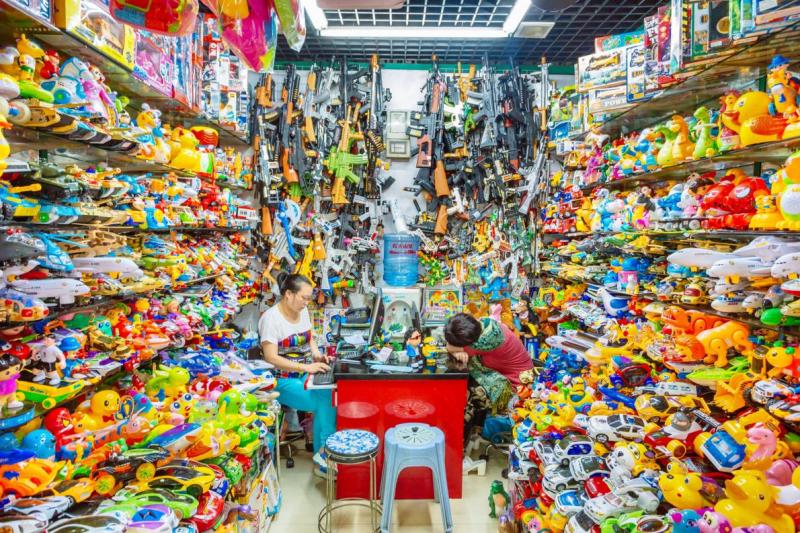 Plastics are almost entirely made from chemicals sourced from crude oil, gas, and coal. These are all fossil fuels that have formed over millions of years from organic matter, having trapped carbon. They are extracted from the earth by drilling and recovery. One such process is fracking or hydraulic fracturing, wherein a mixture of water, sand and other thickening agents are injected into the earth to create fissures and cracks in deep rocks through which oil and gas can flow freely (Image 2). Oil that is extracted can be processed by a range of methods: distillation, absorption, solvent extraction, adsorption, crystallisation, catalytic cracking, polymerisations, alkylation, hydrocracking, isomerisation, purification, and sweetening.

Propylene and ethylene are the primary feedstock for the majority of plastics. Ethylene is produced primarily from natural gas liquids (NGL) propane and ethane, by-products of natural gas exploration, or from naphtha, a product of crude oil refining. The cracking process for both NGLs and naphtha has traditionally produced propylene alongside ethylene. Coal can also be used by first extracting methanol and converting it to propylene and ethylene.

The five standard types of plastics account for 85% of all plastics by weight. These five plastics with shares in global demand are:[2] 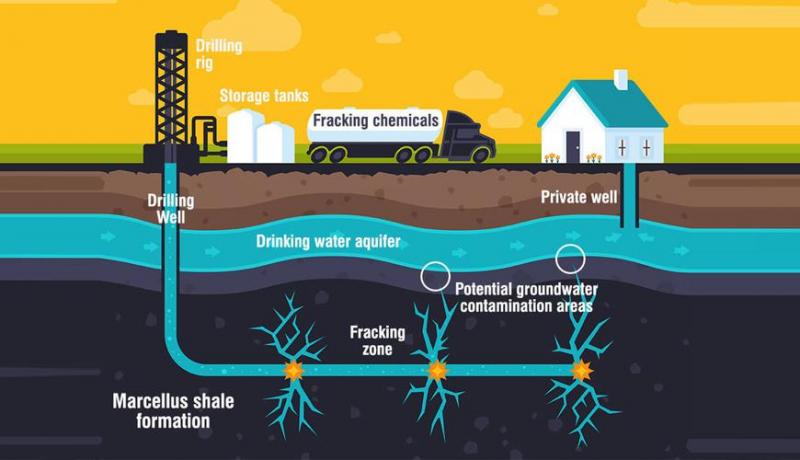 Plastics are not biodegradable, which means they only break into little pieces but never decompose in the natural environment. As a result we have millions of tonnes of plastic overflowing in landfills and spilling into waterways and oceans. The dominant message that is pushed by governments is to dispose waste in bins and prevent litter, as is seen in the Swachh Bharat Abhiyan. The focus has been on getting people to dispose their waste in waste receptacles and transporting unsegregated waste to designated disposal sites, which amounts to displacement of waste and disposing it in unsanitary ways (Image3). 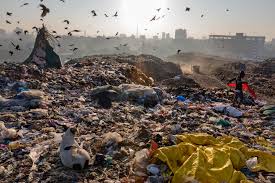 Amidst the strong concern of environmental degradation due to plastic pollutants, the industry has created a narrative that plastic can be recycled or recovered.  According to the European Union (EU), “recycling means any recovery operation by which waste materials are reprocessed into products, materials or substances whether for the

original or other purposes. It includes the reprocessing of organic material but does not include energy recovery and the reprocessing into materials that are to be used as fuels or for backfilling operations.”[5]  However, of the estimated 8.3 billion tonnes of plastic produced since the 1950s, only 9% has been recycled and another 12% incinerated.[6]

In truth, the only way that plastic can be permanently eliminated is by thermal treatments, such as bio-chemical conversion (bio-methanation), thermo-chemical conversion (incineration, pyrolysis and gasification), and thermo-mechanical conversion (refuse-derived fuel RDF). Thermal treatment technology is a process that burns wastes, thereby converting discarded materials, such as paper, plastics, metals and food scraps, into bottom ash, fly ash, combustion gases, air pollutants, wastewater, wastewater treatment sludge and heat.[7] The technology promises not only to reduce the waste quantity by 70-90%, but also that electricity can be generated from waste without having to rely on waste generators’ or municipalities’ ability to segregate wastes.[8] However, what these technologies do is release toxic emissions which are hazardous to environmental and public health. Despite these consequences, the incinerator industry, cement industry, plastic industry and other players attempt to disguise incineration of plastics as recycling. Other techniques promoted include the use of plastics to manufacture bricks and build roads. For them, further and independent assessment is needed on whether the potential leakage of microplastics and additives when the plastics break down, the flammability and related-additives required, after-life use, displacement of more durable or renewable materials such as wood, among others.

The growing movement against plastic pollution has triggered another industry - bioplastics. Bioplastics belong to a family of polymers - polyhydroxyalkanoates (PHAs), polymers that naturally occur in microorganisms. When produced by bacteria, these polymers are a source of energy as well as a carbon store, and are biodegradable, resistant to water and UV rays. It is these characteristics that scientists are attempting to harness in order to make plastics from non-fossil fuel sources. Scientific research shows that PHAs can be produced from rice bran, wheat, starch, cheese, whey, sugarcane molasses, and plant oils, among others. 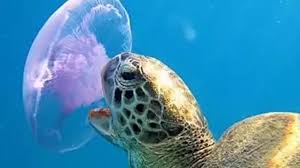 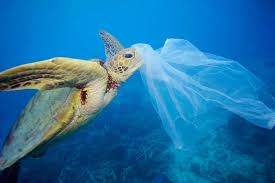 There is also a growing trend of bio-degradable plastics, which refers to plastics that can break down into natural elements in the environment after use. However, multiple labels such as bio-based, bio-plastics, biodegradable, compostable only seem to confound consumers, who are confused if this actually means that the plastic can be thrown in the garden and left to degrade. These labels are also irrelevant for animals and birds that mistake these for food (Image 4). In addition, they undermine any efforts to reduce plastic production and use. Moreover, the biodegradation of bio-based plastics and biodegradable plastics is affected by the type and composition of the polymer, environmental conditions and the type of microorganisms.[9] Among several issues, bio-based plastics have implications on land use - the use of scarce land and potential impacts in association with monoculture trends.[10]

The cost of an insatiable demand for plastics

Extraction and processing of plastic feedstock - oil, gas and coal - produce massive amounts of greenhouse gases into the atmosphere, adding to climate change. Certain processes of extraction, such as fracking, are known to cause methane migration to water wells and underground aquifers, making the water poisonous and even explosive. In some instances, methane gas is known to have seeped across large spans of subterranean ground, bubble up to the surface and cause explosions.[11] 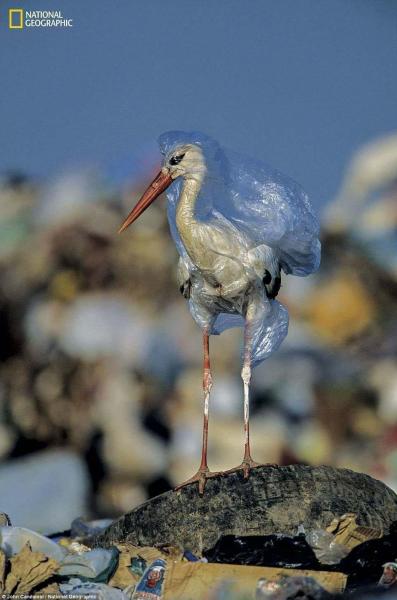 The production of plastics requires the use of plasticisers, flame retardants, antioxidants, acid scavengers, light and heat stabilizers, lubricants, pigments, antistatic agents, slip compounds and thermal stabilisers. Each of them plays a distinct role in delivering/enhancing the (final) functional properties of a plastic product.[12] Many of these chemicals can migrate from the plastic to other materials that they are in contact with, such as food, water and air, even at low or ambient temperatures.

A large part of plastic waste is typically openly burned, emitting carbon monoxide and carbon dioxide, acid gases and unintentional persistent organic pollutants (POPs) such as dioxins.[13] In addition, researchers have recently discovered that common plastics emit greenhouse gases as they degrade in the environment, further accelerating global warming.[14] Environmental factors such as light, heat, moisture, chemical oxidation and biological activity cause physical and chemical changes in the structure of the polymer, making plastics vulnerable to weathering and degradation processes.[15]

The accumulation of plastic debris has been identified as a global problem alongside other key issues of our time including climate change, ocean acidification and loss of biodiversity.[16] A direct consequence of climate change is extreme weather events, such as storms, floods, droughts and sea-level rise. Climate change also impacts biodiversity, as it affects migration and breeding cycles, expansion of deserts, and the composition of forests.[17] Most of the chemicals used in plastics are known to interfere with the hormones of animals and fish. Even the biodegradable plastics, which work best in laboratory conditions, may alter marine sediment geochemistry and influence species coexistence. This is why the fight to protect land, forests, and rivers must include the fight against plastic. The fight for indigenous and tribal rights is a global movement against the loss of life and habitat. The demand for petroleum, gas, and coal is being fuelled by the demand for plastics. If these could be kept in the ground, and the source of plastic eliminated, there may be a chance to win. 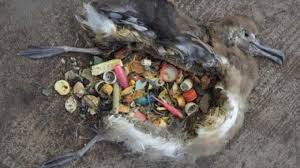 [1] Luo, Kevin. Are you breathing plastic air at home? Here’s how microplastics are polluting our lungs

[6] Marine Plastic Litter and Microplastics, Basel Convention on the Control of Trans-boundry Movements of Hazardous Wastes and their Disposal