Assessing road quality may seem like a highly complex science, requiring not only prior technical knowledge and experience, but also specialised equipment and tools. For the most part, this is true - most municipal authorities around the world are tasked with surveying roads and pavements regularly to determine maintenance, repair or rehabilitation needs and require teams of highly qualified civil and mechanical engineers, amongst other professionals. However, here in Chennai, where the Corporation of Chennai holds authority over the 2,800km of roads and roughly 850km of footpaths, the condition of major urban infrastructure is abysmal. Potholes are rife, footpaths are either dangerously narrow or nonexistent and the corporation does not seem to be proactive enough; it certainly does not take an expert to determine that Chennai’s roads are in desperate need of rehabilitation. In fact - mere citizens have the power to assess and even quantify the surface quality of roads and pavements, without needing access to special knowledge or apparatus.

The Pavement Condition Index (PCI) is a numerical indicator that rates the general surface condition of a pavement or road. It is a statistical measure which requires manual/visual inspection and survey of the required roads, and was developed by the United States Army Corps of Engineers. ASTM International (a global standards organization that develops and publishes voluntary consensus standards for a plethora of services, products and systems) standardized PCI surveying processes for roads as well as airport pavements. It uses verbal benchmarks varying from “failed” to “excellent” as functions of the quantitative rating assigned to roads. 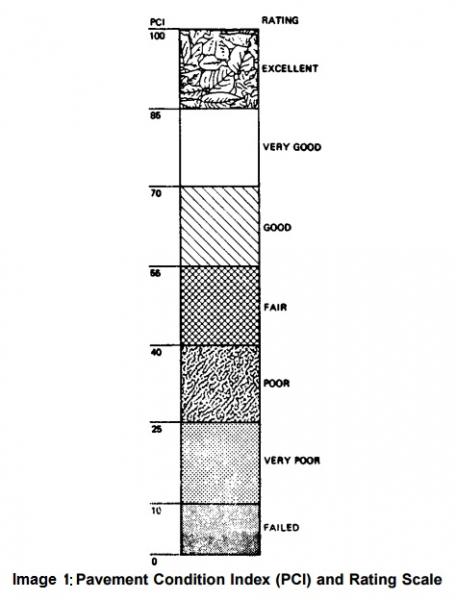 The PCI provides a measure of the present condition of a pavement or road based on the number and types of ‘distresses’ observed on its surface, which by association indicates the structural integrity and surface operational condition, but is unable to measure the structural capacity of the said pavement. Yet, it provides a rational and objective basis for determining maintenance and repair needs. The ‘distresses’ mentioned earlier include alligator cracking, bumps, depressions and potholes and many more. They are assigned a severity level (low, medium or high), oftentimes based on how they affect the ‘ride quality’, a self-explanatory term that is also described with the benchmarks low, medium or high depending on the effect the distresses have on a vehicle driving at normal operating speed. The result of this analysis is a numerical value ranging from 0 to 100, with 100 representing the best possible condition and 0 representing the worst possible condition (Image 1).

Before the development of the PCI as the go-to index for measuring road and pavement condition, certain governments, particularly within the United States, used other indices to determine the ride quality/roughness or the surface distress/rating, but these were not standardized methods and did not account for important factors. Certain American states still use these rather antiquated systems - however, the majority now use the PCI, not only because it is essentially a combination of the above measurements, but also because it accounts for factors such as structural capacity and friction and allows distresses to be tracked over time, which are not addressed by pre-existing indices. The desire for a more comprehensive assessment of pavement performance, reinforced by a national - and now international - emphasis on ride quality led to the development, success and dissemination of the Pavement Condition Index.

By monitoring the PCI on a regular basis, we could essentially establish the rate of road deterioration, which consequently permits us to carry out the identification of repair and rehabilitation needs well ahead of time, which can certainly cut costs in the long term (Image 2). Not only does the PCI give us performance feedback for validation purposes, but it also enables us to improve (and potentially revolutionise) road and pavement design, as well as maintenance procedures. However, the local government turns a blind eye to the crumbling infrastructure when they could quite easily establish the PCI as the standard method for assessing and ameliorating road quality. Nevertheless, willing NGOs can assist in revolutionising the assessment of road quality at the very least, by simplifying the PCI for the citizen and enabling his or her participation in providing accurate data to the government - which would certainly get their attention. 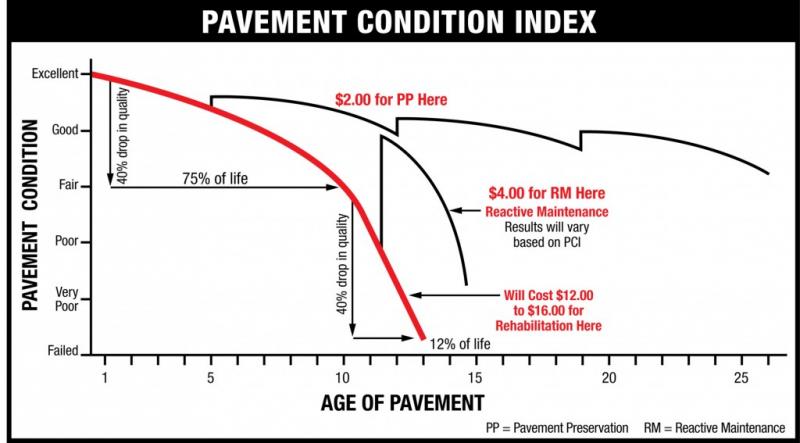 While the PCI is one of the more quantitative measures of the surface quality of roads, the last few years have seen the rise to prominence of more conceptual systems. One is the idea of “complete streets” - an inclusive design approach that does not prioritise automobility and leads to more “livable” cities - which will be explored in a future blog post. Stay tuned!