Water tanker lorry is a noticeable vehicle all around Chennai throughout the year. If anyone has been to Chennai it wouldn’t be so tough for them to spot the lorries roaming in the city leaking water all over the road. Being a Chennaite, I have quite often seen these scenes and I have also observed these lorries very closely. Basically these lorries are like Superstar movie tickets; people - me included - stand in queues and look forward to welcoming these lorries to get their two buckets or pots of water, especially during the scorching summer months. Most of the Chennai people depend upon the water tanker lorries to meet their domestic water needs. The most shocking thing is, we have to endure standing in a queue be it rain or shine. But all these struggles and demand for water can be solved, by giving importance to rainwater harvesting (RWH).

Currently, there are two main sources of water in Chennai 1) The water conserved during the monsoon season in the reservoirs situated in Redhills, Poondi, Sholavaram, and Chembarambakkam and 2) The groundwater which is tapped via bore wells. Due to rapid urbanisation and increase in population, the city has seen uncontrolled exploitation of these water resources. The situation worsens when Chennai city faces water shortage as a result of low rainfall. When surface water fails to meet the demand due to the failure of monsoon, people depend more on groundwater, as the extraction of groundwater increases manifold with limited natural recharging of groundwater due to concrete all over city surfaces resulting in dried bore wells and seawater intrusion in many areas. 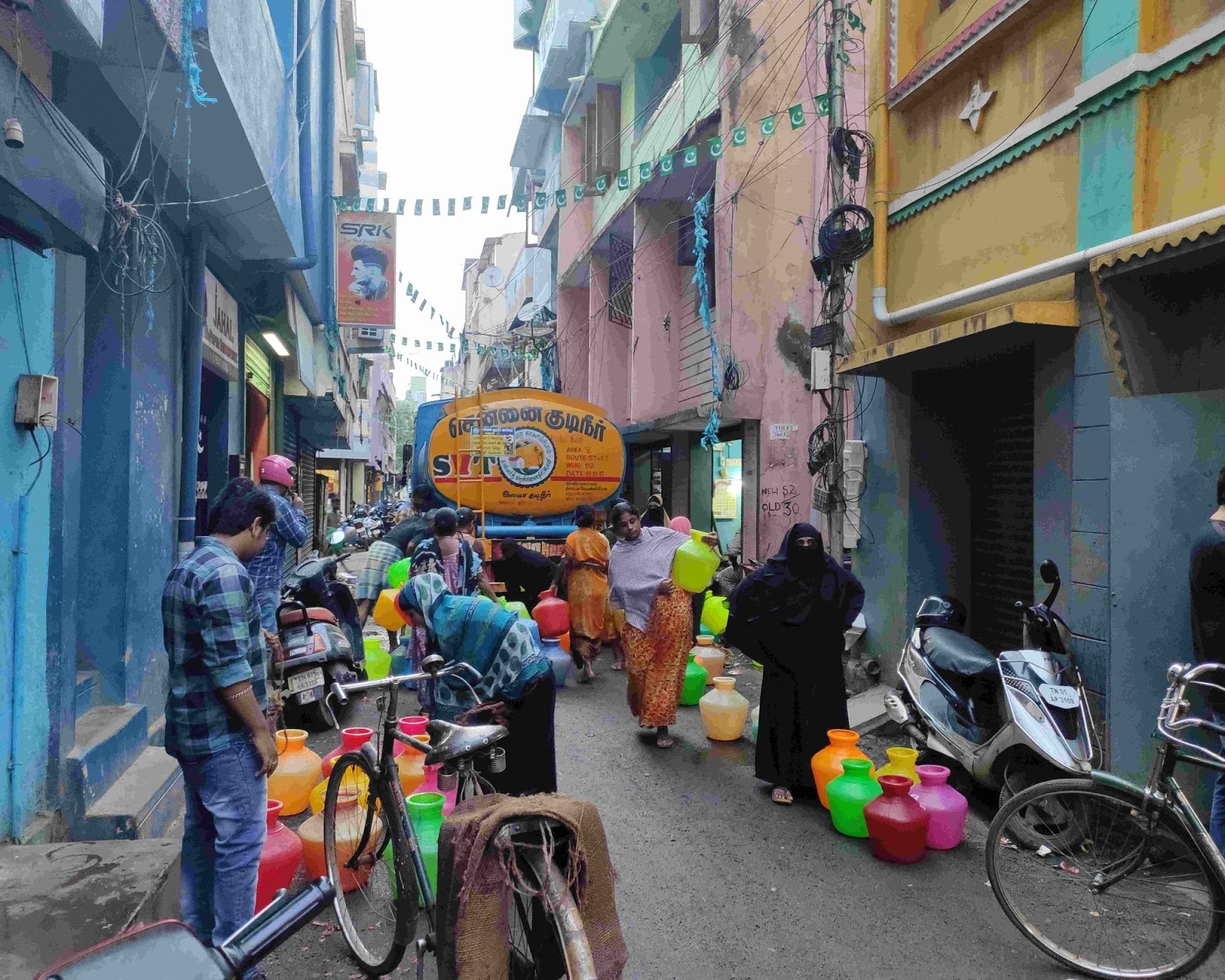 The annual average rainfall in Chennai is estimated to be around 1200-1300mm which is significantly higher than the national average of 800mm. The problem is that this rainfall occurs in a short period of time usually around 300 hours in a year. It is important that water conservation methods are practiced to conserve water whenever the city receives rainfall and equip ourselves to be ready. The real challenge is drafting and executing a plan to achieve this herculean task. So what would be the contingency plan? Whether the city has taken any measures to conserve water in the past? These are some of the questions we have to ask ourselves. Rainwater harvesting seems to be the appropriate way of achieving this but it is not a new idea when it comes to the water management history of Chennai.

When Chennai faced severe water crisis in the year 1993-1994 due to the failed monsoon of 1992, the Chennai Metropolitan Development Authority(CMDA) made it mandatory for all new constructions to have a RWH structure. It was not enough for the apparently growing needs for fresh water in the city. Therefore by October 2002 the State Governor of Tamil Nadu amended The Madras Metropolitan Area Groundwater (Regulation) Act of 1987 and made RWH compulsory for all buildings irrespective of the date of its construction. Though the act was enforced with immediate effect it failed because of the time delay in constructing the structures. Learning from the earlier mistakes, the State Governor passed an ordinance in July 2003 and it was well informed before the start of monsoon. Owing to the Act which penalised the building owners who have not set up RWH structures, by 2003-2004 the construction works drastically increased. In 2005, Chennai received a good amount of rainfall and there were proper structures to harvest rainwater. From the subsequent year on, the construction waned, especially after the Chennai deluge of 2005.

Rainwater Harvesting refers to the process of tapping of rainwater during rainy season and utilising it for various purposes in the days of water scarcity. There are two ways to achieve this, either one can store the water in tanks or sumps or direct them into the groundwater table. The next question is how much rainwater can be harvested? Considering a building with flat terrace area of 100 square meters in Chennai, it receives an average of 1300 mm rainfall annually. Volume of rainfall = Area x Height of Rainfall (100 sq.m. x 1.30 m = 130 cubic metres which means an average of 1,30,000 litres). Assume that we harvest 70% of rainfall effectively then 1,30,000 x 0.7 = 91,000 litres. This means 91,000/365 = 249 litres of water per day will be available which is sufficient for the household having around 8-10 members. This can be stored for direct use or can be recharged into the ground. 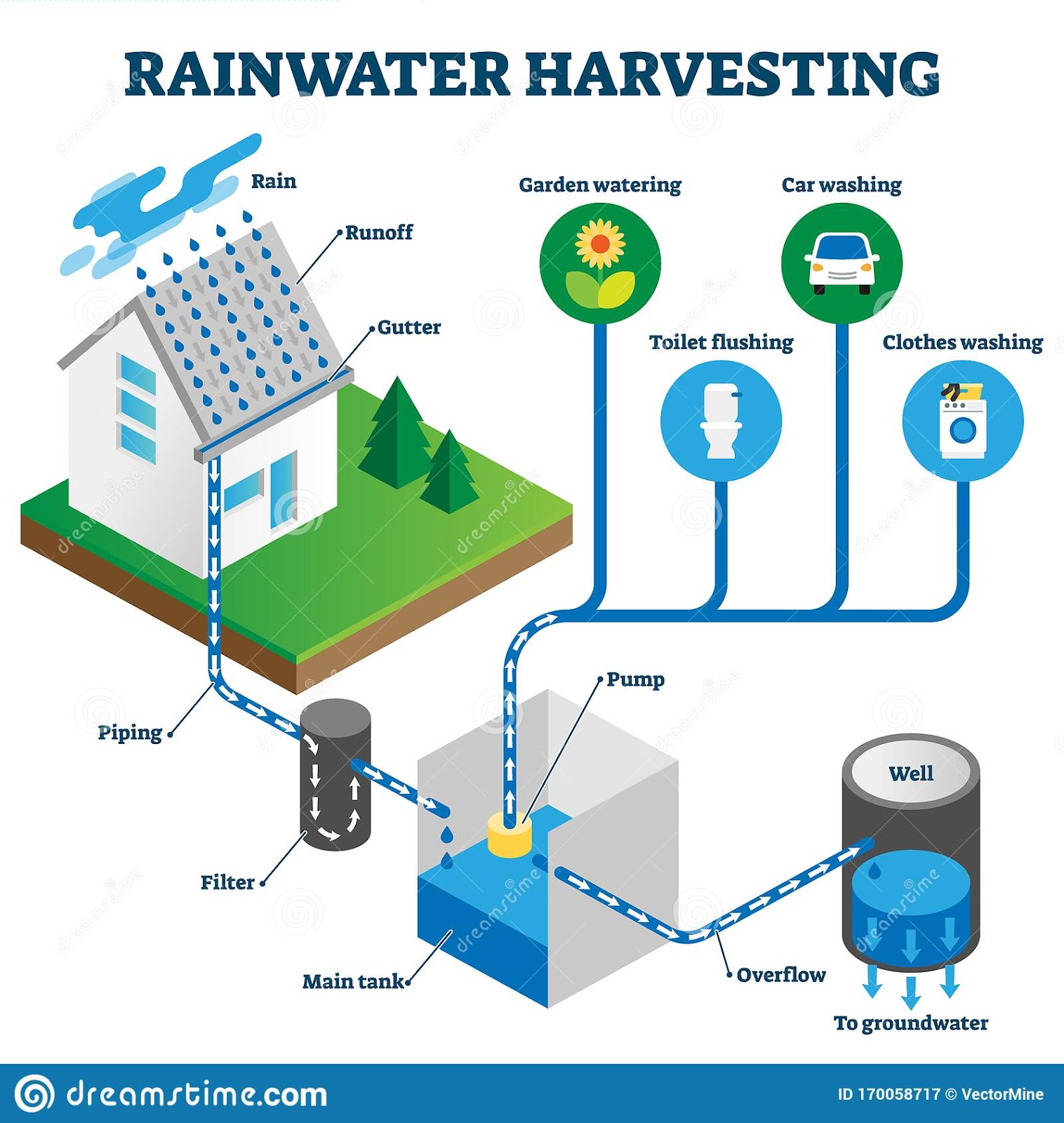 If we want to use rainwater for domestic purposes directly then some maintenance plans have to be strategized. Although rainwater is relatively clean, there are chances of contamination. Collected rainwater may contain different contaminants like dust, bird and animal droppings, insects and garbage, if the procuring area is exposed to the contaminants. If these impurities are not filtered before entering the drain pipes, then the water quality will break down, and the tanks/pits will likewise be loaded up with contaminants. The other problem in stored water is the presence of zinc and lead leached from metal roofs/pipes/tanks and deficiency of minerals such as calcium and magnesium. If this water is used for drinking purposes then this may lead to serious health issues. We can solve all these problems with simple maintenance and can be a good example for sustainable water management house or apartment.

For a long lasting rainwater harvesting structure the following steps should be done regularly: (1) Disinfecting with chlorine to kill algae, bacteria and viruses. (2) Frequent checking of water quality by simply opening the tank and checking for any palpable contamination, odor, residue or dust. (3) Hydrogen sulphide strip test must be done to check the quality of water. (4) Cleaning the sediments with proper filtering methods must be mandatory so that leaves and insects that float in the water can be prevented from entering the storage tanks. This can be achieved by installing wire meshes and covers over the entry points that will also help to prevent mosquito breeding. (5) Cement tanks can be an alternative for the plastic tanks which will help us to maintain the pH level of 7 (Neutral). (6) One can install a downpipe diverter for diverting the first flush of dirty rainwater into an alternate water chamber, as well as for blocking contaminated water from entering the tank. (7) Bio-mineral cartridges packed with many minerals are available in the market which enhances the mineral quality of rainwater. These cartridges can be installed in storage tanks.

The Great Tamil poet and philosopher Thiruvalluvar, said “Neerindru amaiyaadhu ulakenin yaaryaarkkum vaanindru amaiyaadhu ozhukku” which means “If there is no water, life fails. Without rain, life as we know it will fail”. Rainwater is an ultimate source of water, without it there’d be no life on earth. Rain’s primary purpose is to give us water to drink and our primary responsibility is to conserve it.

Chennai City receives rainfall during North-East Monsoon (Oct - Dec) and South-West Monsoon (June - September). A major portion of the rainfall is during the North-East Monsoon (Oct - Dec). Residents still have time to inspect and clean their rainwater harvesting structures in their houses. With effective RWH methods, maximum rainwater can be harnessed during North-East monsoon in the city. People who have not installed RWH in their flats, individual homes, apartments etc., can consider RWH structures installation for sustainable water management. For further assistance Visit the Rain centre, and Adaiyaaru a model house on RWH to learn more about various RWH designs, cost estimates and a list of contractors to implement RWH.