Front of Pack Labels (FoPL) are simplified, decipherable information of certain nutrients of concern like fat, salt and sugar on pre-packed or processed foods. FoPL is designed to help consumers identify and compare between products at the point of purchase. The information on FoPL therefore needs to be placed in such a manner that  the information is noticeable and easily understandable.

In 2018, Food Safety and Standards Authority of India (FSSAI) introduced Front of Pack Labels under the Food Safety and Standards (Labelling and Display) Regulations.  But three years later, the regulation remains only in its draft stage. Considering the increase in non-communicable diseases (NCDs) and the deaths related to it, it is imperative that we implement the FoPL regulations urgently, to contain this needless loss of lives.

Around the world, various schemes and techniques are being followed to help consumers easily identify healthier food products. Studies and reports have shown us that FoPL has the potential to positively change lifestyles and health of consumers in general (for example, Packer et al, 2021).

The following are four major FoPL systems used across the world:

Endorsement logos represent the absolute healthiness of the food product and have been adopted in countries like Belgium, Croatia, Czechia, Denmark, Finland, Iceland, Israel, Lithuania, Norway, Poland, Slovenia and Sweden. These logos are displayed based on overall assessment of defined health standards. They are evaluated for positive judgements only and don't provide any information on the product's unhealthiness or particular nutrient levels (1).

1. Nordic keyhole system is the oldest pack label system first introduced in Sweden by Swedish National Food Agency in 1989 and subsequently expanded to Denmark, Lithuania, Iceland and Norway in the 2000s. It identifies nutrients like total fat, saturated and trans fat, added sugar, salt, dietary fibre, wholegrains, and are displayed on the basis of overall assessment of healthiness. It applies to both pre-packaged and unpackaged foods like fruits, vegetables, bread, cheese, meat and seafood. It cannot be used for snacks, potentially eliminating such foods from a healthy diet. Sweden and Denmark had the keyhole system in restaurants till 2017.  The logo, as the name suggests, is a white key-hole on a green circle (1)(2). 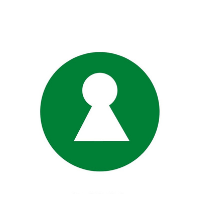 2. Green endorsement logo is followed in Israel and identifies nutrients like sugar, sodium, saturated fat and fibre in pre-packed and unpacked foods. It is derived from Israeli Mediterranean diet guidelines and can be  applied to natural and minimally processed foods. Foods that are  marked as high in sugar, salt and fats in the ‘red label warning system’ (explained below are not eligible to carry the green endorsement logo.  (1). 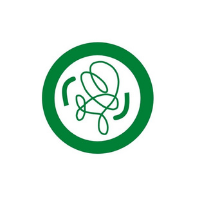 Summary indicator systems provide a summary score of the product through positive and negative evaluation judgement.

1. Nutri-score labelling scheme has been followed in France since 2017 and was recently approved in Belgium, Spain and Portugal. This system provides aggregated information about a product's overall healthfulness or unhealthfulness and applies to pre-packaged food and drink. Criteria modifications have been made for specific categories such as cheese, fats and non-alcoholic drinks. It has a scale of five colours - dark green to dark red with corresponding alphabets A to E, providing a five-grade scoring of the product. The score is made by calculating negative points from energy, saturated fat, sugars, sodium and positive points depending on the proportion of fruits, vegetables and nuts, fibres and proteins (3). Dark green and letter A indicate the best nutritional quality, while dark red and letter E are the opposite. The use of letters is to ensure better visibility of the label, especially those who have difficulties with identifying colours and the colour scale as such. An experimental study from France found that consumers chose smaller portion sizes when presented with the Nutri-Score label displaying information per 100 g (1). 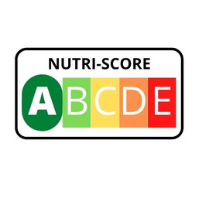 2. Health star rating is a labeling system that rates the overall nutrition profile of packaged foods and assigns a star rating with 10 scores from half a star to five stars. It was developed in Australia in 2014 and adopted in New Zealand. This rating identifies saturated fat, sugar, salt, fibre, protein, nut, legume, fruit or vegetable in the food and determines the number of stars by assessing the nutrients. A study was conducted in 2019 to analyse consumer choices and the role of voluntary health star rating systems in Australia, and it showed that the system changed the purchasing behaviour of people towards healthier choices (4)(5). 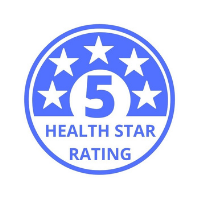 Nutrient-specific warning label is a labeling system where information on individual nutrients are kept separate and if the product exceeds its nutrition standard threshold, it must carry the label. This type of label evaluates negative directive assessment of content and is considered best fit for the purpose. Such labels have been adopted in Chile and Israel.

1. Stop-sign warning symbol was the first front of pack warning labels and Chile was the first country to introduce it in 2016. It is a government mandated warning label that identifies energy, salt, sugar and saturated fat exceeding its threshold level in all pre-packed food products. The label includes black colour octagons with white texts mentioning ‘high on’ calories, salt, sugars and saturated fat. It is also mandated that offering or selling such foods in schools and promoting to children under 14 years of age should be prohibited. Following Chile, countries like Uruguay, Peru and Israel have introduced warning labels (3). 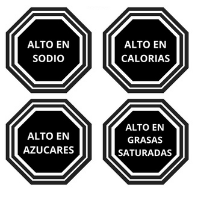 2. Red warning label is similar to the stop-sign warning label, followed in Israel since January 2021. It identifies sodium, sugar and saturated fat, and applies to two groups of pre-packaged foods, namely food and beverages. Nutrient threshold is set by the Israeli Ministry of Health who mandated implementation of the criteria for two years till 2023. The warning label is three icons (a spoonful of sugar, a salt shaker and a fat block with a knife) corresponding to sugar, salt and fat content in the food. This is accompanied with text labels that warn the consumer of the high content of these ingredients. Spoon indicates sugar, salt shaker indicates sodium and fat with knife indicates saturated fat. The graphics were included to increase accessibility of the label for those with low literacy (1).

Nutrient-specific interpretive labels have detailed information about the amount of nutrients like salt, sugar and fat and their percentage levels.

1. Reference intakes (RI) were previously known as Guidelines for Daily Amounts (GDA), 2005. These labelling systems need the consumer to be trained to interpret the information on the label.  This label provides value of energy and other nutrients like fat, saturates, sugars and salt towards an adult’s reference intake. It is used in all countries across the European Union. A study conducted in 28 European countries showed that an average of 25% of retail food products across all countries displayed the GDA (3). 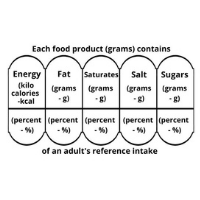 2. Traffic light colour coded RI or GDA is a nutrient labelling system which includes colour and numerical values. This system identifies energy, total fat, saturated fat, salt and sugars. It has red, amber and green colours interpreting high, medium and low levels respectively with values for  saturates, salts and sugars displayed on the label. While this label is developed and endorsed by the government, using it is voluntary. Despite being voluntary, most supermarkets and brands across the UK display this on their products. The colours, despite being interpretive, distracts and diverts consumers with unnecessary information (2). This system is also followed in two major supermarkets of Ireland and has been proposed in Portugal in 2020 (1). 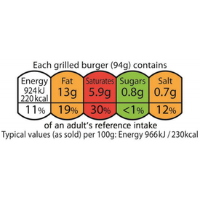 These are the different types of FoPL systems followed across the world and were adopted during different times as per the need that arose in the respective countries. In many cases, it is found that the FoPL has given a culture of safe food practice to consumers. As people increasingly consume processed and ultra processed food in India, we also require such regulations that are developed keeping in mind the end rural consumer and are implemented effectively to promote a healthy lifestyle in our country.