Looking at Chennai's roads, one would wonder if the roads in Indian cities are designed only for motorised vehicles. Two wheelers and four wheelers account for 90% of the total vehicle fleet pushing users of public transport, pedestrians and cyclists to the margins even though the majority of trips are made by them. The civic administration in Chennai woke up late to this issue. It began constructing footpaths in several parts of the city. I decided to get a feel of these footpaths to see how comfortable it is to walk on them. What better place to experience than to visit Chennai’s flagship pedestrian infrastructure project? On a Sunday afternoon, I walked in T-Nagar’s Pondy Bazaar pedestrian plaza and was pleasantly surprised to see people walking on the footpath with much ease and comfort. There was no jostling for space as the footpath was wide enough for even 10 people to walk comfortably! This is in contrast to the discontinuous, and encroached footpath we see elsewhere in the city where even two people walking side by side is difficult. Pedestrians in the city are marginalised acutely in such a way that even walking on the few footpaths in the city are not safe as vehicles such as two wheelers even ride on these pedestrian spaces. T-Nagar pedestrian plaza is one of the early interventions of Greater Chennai Corporation (GCC) which is pedestrian centric where the carriage way for vehicles has been reduced considerably for increased footpath space.

Chennai adopted a Non-Motorised Transportation (NMT) Policy way back in October 2014 to make walking and cycling its priority. The policy aims to stop the current decline in walking and cycling in the city by creating a network of footpaths, cycle tracks, greenways and other NMT facilities. Bringing the policy into action is not without its many challenges. In most of the newly laid footpaths in Chennai, apart from encroachments there are some lingering problems. The first and the obvious problem is the non adherence to footpath width according to the Indian Roads Congress (IRC) standards. IRC has specified clear guidelines on footpath width according to the prevailing land use. The Ministry of Road Transport and Highways (MoRTH) from time to time has given guidelines asking all stakeholders to meet IRC standards while construction of national highways however when it comes to city roads and towns the IRC guidelines for pedestrians are largely ignored.

Table 1: Footpath width according to land use type as recommended by IRC

In our flawed approach to reduce vehicular congestion on roads the footpath space was compromised over the years for increased carriageway space. It is high time that the needs of pedestrians and cyclists are safeguarded to counter the increased motorisation of our roadspace. Section 198 A of The Motor Vehicles Amendment Act, 2019 fixes accountability on authorities/consultants/contractors/ concessionaires for any failure to comply with the standards. IRC standards on footpath surface, width,  encroachments, and street crossings etc. must be adopted and implemented while designing and construction of footpaths. However there is no time frame on when the rules will be notified. It also remains to be seen how this law is enforced in the future when it comes to non compliance of footpath standards. 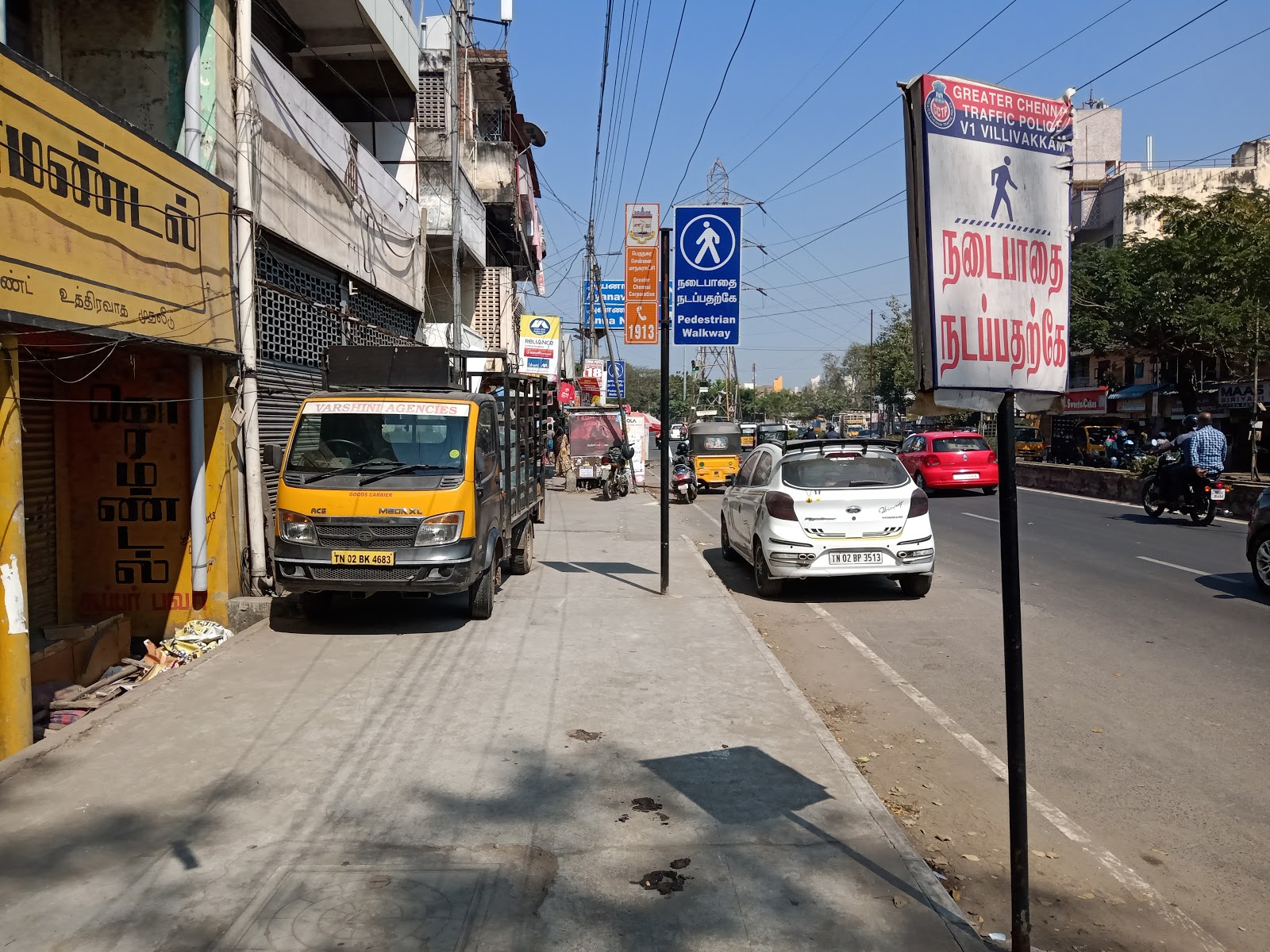 The next major problem for the pedestrian is whatever footpath space that remains for the pedestrian is encroached. This ‘invasion’ of footpaths is often by two major groups. First is the traders or shopkeepers who put some of their products and display boards on the footpath outside their shops. Secondly a pedestrian has to deal with parked vehicles on the footpath. A newly laid footpath is an added convenience for these motorists. Over and above this there are encroachments by utilities like electric junction boxes and poles. 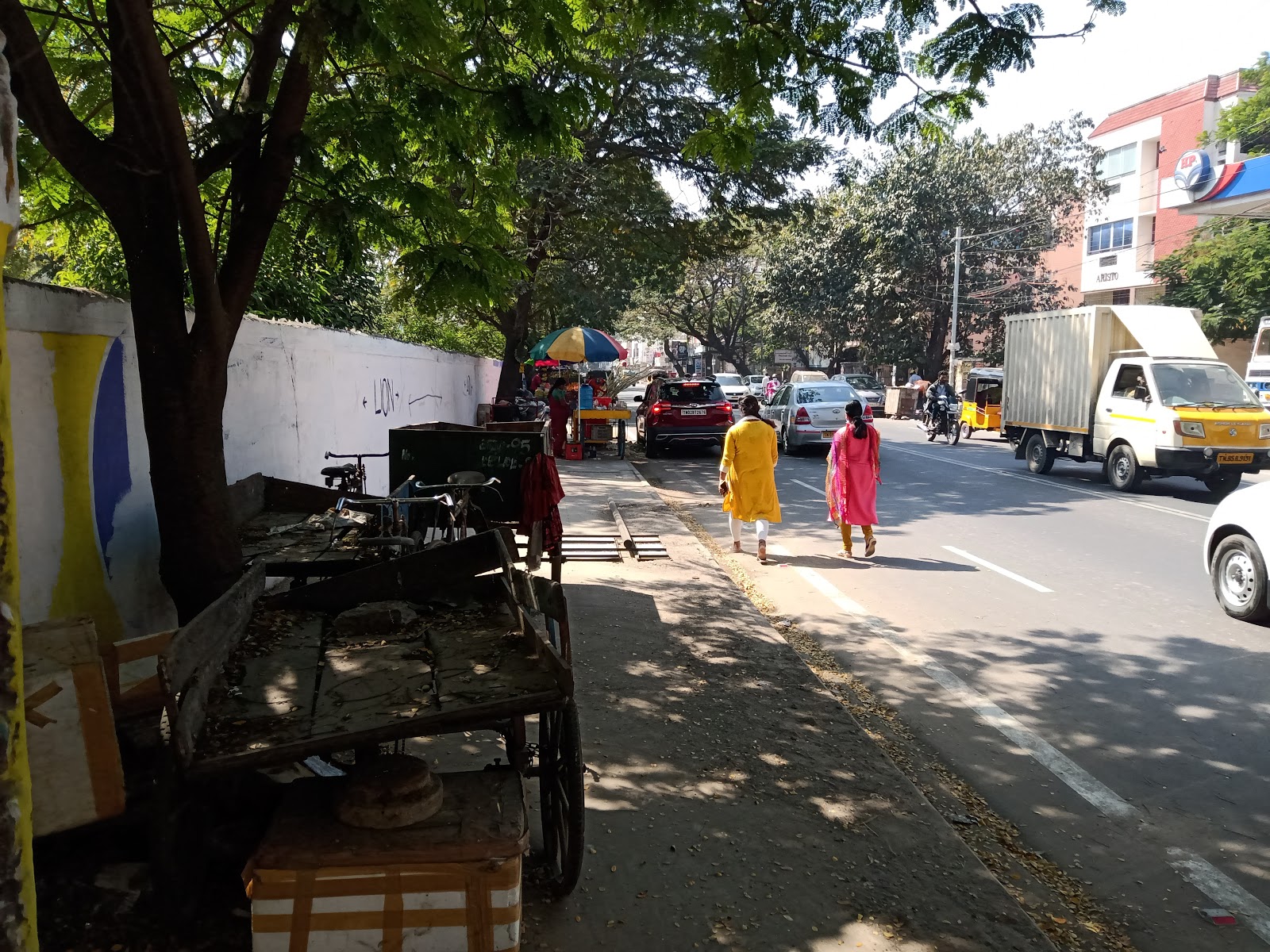 Image 2: Pedestrians forced to walk on the carriageway at Konnur High Road, Villivakkam

Unraveling the encroachment conundrum
Reclaiming footpaths for pedestrians is a civic issue that has remained unsolved for as long as our memory goes. Giving petitions to the administration, social media campaigns, approaching courts to remove encroachments on footpaths have only resulted in knee jerk reactions of the government. Removal of encroachments on the orders of local administration are short-lived as the encroachments are back shortly after the police/GCC staff have left. Recently the footpaths of Pudupet were cleared of encroachments voluntarily by the traders. This intervention through dialogue between local police and business establishments is a step in the right direction. But this one step alone won’t be sufficient.

Regular inspection of footpaths for encroachments by the police and corporation authorities remains the key. Also mechanisms must be created for better coordination between police and civic administration to conduct such exercises regularly. This would also stop government agencies from shifting blame on each other. As a way to supplement and help overcome the shortage in enforcement staff, CCTV cameras must be installed and encroachment monitored electronically. These stronger enforcement measures will ensure certainty of punishment and create a deterring effect for possible violations. Also for the hawkers, vending zones must be demarcated so that vendors and hawkers are not harassed by law enforcement. At the same time law enforcement against parking on the footpath must be stepped up. Technology such as Automatic Number Plate Recognition (ANPR) cameras that are linked to Vahan software can be used to identify defaulters parking on the footpaths.

Vendors and hawkers are an integral part of the Indian streets

But during such anti encroachment drives, more than anyone else it is the hawkers and vendors who usually bear the brunt of our civic authorities' action. Being part of the informal sector they have not been given the space to operate and therefore considered illegal. Government issued identity cards integrating them to footpath space would prevent them from getting displaced. It is often seen that they are the ‘first responders’ in the street incase of a road crash and help maintain security in the area by being ‘the eyes on the street’. Their relevance was further strengthened during the current Covid-19 pandemic. As people were unable to move far due to lockdowns, hawkers supplied commodities to the residents. We can even further say that vendors and hawkers contribute to sustainable transportation goals of the city as people don't need to go far to meet their needs and less travel means less congestion on the roads. Creating a pedestrian friendly city should therefore not be misconstrued as scrubbing it free of vendors and hawkers.

Encroachment of footpaths by parked vehicles is still a quagmire for the civic administration. With increasing urbanisation and lack of dependable public transportation services in cities and towns, private vehicles began to increase by leaps and bounds in states like Tamil Nadu.  This increase in private vehicles has resulted in them parking on footpaths. Providing parking space for these vehicles is a herculean task as vehicle population continues to increase and so demand will outstrip any addition to parking spaces. The solution is to strengthen public transportation thereby reducing private vehicle use. The main reason for the increased usage of private transport is the lack of first and last mile connectivity. Providing feeder services to public transportation such as buses, trains and metro rail would help. Increasing the fleet size of buses is critical while ensuring reliability and timeliness of service. In spite of these moves, some use of private vehicles will still remain. In this case, setting up a paid parking system across the city with rates that are revised periodically might work further towards discouraging this.

At present, encroachments by commercial establishments, street light poles, and electric junction boxes that block the continuity of footpath are not cleared before the footpath is relaid. Nor are the relaid footpaths checked by the enforcement authorities for illegal parking. The purpose of the footpath is not met and the funds have been spent without benefiting pedestrians. These issues at the local level could have been dealt better had there been a functioning Municipal Corporation with elected members. It's been nearly 10 years since the last urban local body elections were held in Chennai. The temporary arrangement of executive-led corporations headed by the Corporation Commissioner are not structured to find long term solutions to the problems faced by the city. They are more concerned about fulfilling that procedure/rules that are followed for a project rather than achieving actual results on the ground. In an elected Municipal Corporation, local representatives can be approached to fix such problems. They could be held accountable to remove encroachments. Elections to the local bodies must be prioritised as a first step.

Public participation
While this can be done, residents from the city including street vendors must raise the demand for a sustainable and inclusive city for all. They could jointly conduct road audits to see if proper   space is available for people to walk and adequate space is provided for the hawkers to conduct their livelihoods and also check if parking is done responsibly.

The vision set by the NMT Policy to bring back spaces for pedestrians calls for a concerted, multi-pronged action on different fronts. While the T-Nagar pedestrian plaza is a good first step in securing the rightful space for pedestrians, we must not let our guard down and continue to protect these spaces from vehicles and other encroachers. At the same time, motorists and other encroachers must change their attitude towards pedestrians and recognise that the road is also meant for those who walk.