Child safety on Tamil Nadu's roads: are we doing enough?

Children are perhaps among the most overlooked Vulnerable Road Users (VRUs) in our country. This statement is justified by the scary statistics of India witnessing 11,168 child fatalities on roads in 2019, an increase of 12% from the previous year. Regrettably, Tamil Nadu accounted for 10.3% of the total child fatalities in the country amounting to 1153 deaths on roads in 2019. With such high numbers in place and children losing healthy years of their lives due to road injuries and deaths, it is paramount to first understand that these are largely preventable. These statistics underline the need to introspect the measures the state has been taking to promote child safety on roads and formulate a robust legislative framework that supports tangible changes. Evidence from across our cities show that, in India, a larger proportion of children use walking as their primary mode of transport followed by school buses, paratransit (share autos for example) and private modes such as cars and bikes. Does our legislation address child safety across the various modes used by them? That is something to think about.

We have rules for school buses. What about the other modes?

A quick peek into the existing legislative framework in Tamil Nadu shows that it caters to only a piece of the pie when it comes to ensuring children’s safety on roads. In 2012, the state government introduced the ‘Tamil Nadu Motor Vehicles (Regulation and Control of School Buses) Special Rules, 2012’ vide notification dated 30.09.2012 under the Motor Vehicles Act, 1988. The special rules entailed various additional safety provisions than those mentioned in the Act, including school bus seating capacity limits, installation of speed governors, periodic inspections, maintenance of log books for the same, age limits for bus attendants, and specifications for footboard clearances. However, this was a response to the directive by the Madras High Court taking suo-moto cognizance of the death of a school child, who lost her life by falling into a hole of an unmaintained floorboard of her school bus due to negligence in checking the fitness of the vehicle. It is unjustifiable that it took the gruesome death of a seven-year-old for authorities to step in with a special set of safety rules. A decade later, another death of a five-year-old school child on his campus due to negligent reversing of the school bus by the driver, has pushed the Tamil Nadu government to propose an amendment wherein cameras and sensors are to be mandated in school buses.

The irony is the loss of lives paving the way for such new rules, regulations, and policy changes that should have ideally been basic safety considerations evolving with time. Sadly, there have been minimal changes to the law since 2012. A court directive in 2017 suggested bringing in similar safety regulations for government buses serving school routes as children form the majority of the ridership during peak hours but it has not been acted upon until date. An order was reissued by the Education department in 2018 stressing compliance to the Tamil Nadu Motor Vehicles (Regulation and Control of School Buses) Special Rules, 2012. The transport department, however, has been silent on amending the rules and bringing in institutional changes pertaining to children’s safety on roads. Furthermore, road crashes involving children resulting in injuries and deaths at the district level remain largely underreported. 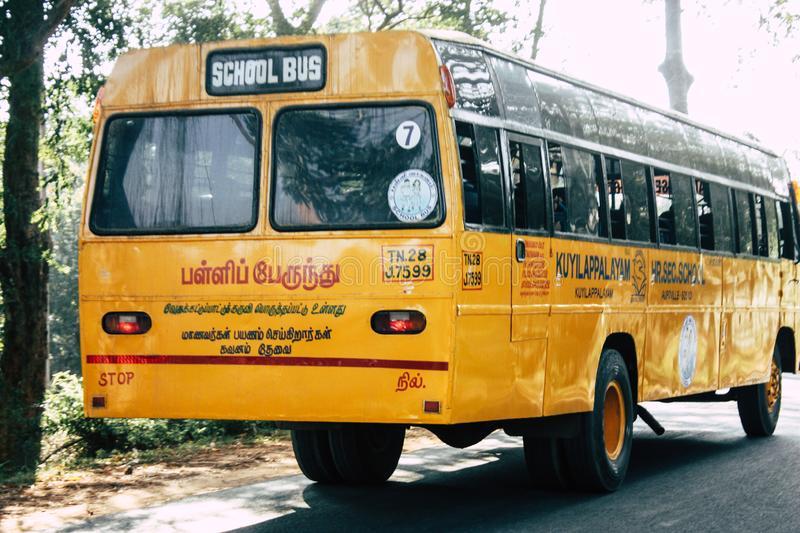 Last month, a five-year-old child lost his life in the district of Tuticorin because the overloaded auto overturned. This was made worse by the reckless behaviour of the auto driver who was on his phone while driving. The furore over such cardinal issues die down quickly and overloading in vehicles ferrying children to school have not gained the attention they should. This needn’t be the case though. It is important that all public transport modes and paratransit modes (eg: autos, share autos, rick-shaws, omnivans etc.) carrying children to and from school on a daily basis be factored in while framing the rules to ensure child safety on roads.

Significant progress in the central legislation managing road safety in the country viz. the Motor Vehicles Amendment Act, 2019 has urged child safety measures in recent times. The notification, dated 15.02.2022, mandates age-specific safety measures such as child safety gear, and safety harnesses for private modes of transport i.e. two-wheelers and cars. This can be positively considered as the first step but it is crucial that, in the near future, the central legislation also mandates such safety provisions for other transport modes that are used to ferry children to school (i.e. school buses, omni vans, autos, cycles etc). Effective implementation of these safety provisions by the states will pave the way for tangible outcomes and help reduce road injuries/fatalities involving children to a reasonable extent. This spells out the pressing need to implement MVAA 2019 in Tamil Nadu as it continues to remain one of the two states that has not taken up the amendments yet. 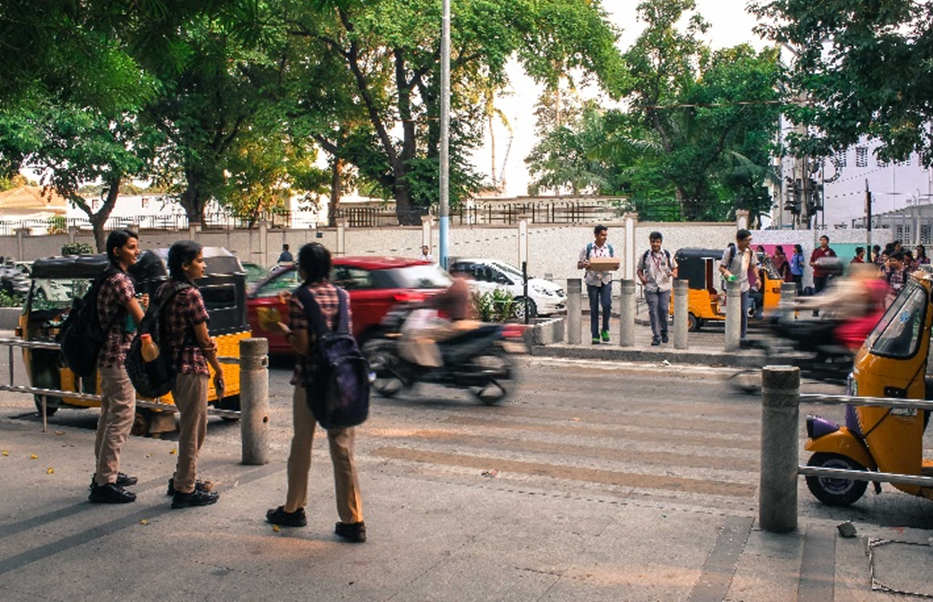 Are our roads safe for children who walk?

In addition to all these concerns in the existing legislation and its enforcement, the primary road risks children face remain undiscussed. With 60% of children in our country walking to school as per the National Statistical Organisation data, they hold a right to a safe road environment. Therefore it is a given that speed management, designation of school zones and special traffic laws for such zones, optimized carriage width, appropriate road markings and placement of signage, road surface treatments, provisions such as continuous footpaths, table-top road crossings combined with strict enforcement action leading to overall changes in road user behaviour need to be equally addressed as children are poor stewards of their own safety. As much as instilling education and awareness of the road environment and road rules among children is important, it also takes accountability from every driver on the road to create a safe traffic environment for all. This calls for a framework at the state level that will steer multiple stakeholders (government authorities, school management, civil society organisations, resident welfare groups, urban planning experts and various road user groups) to come together and work towards road safety for children. 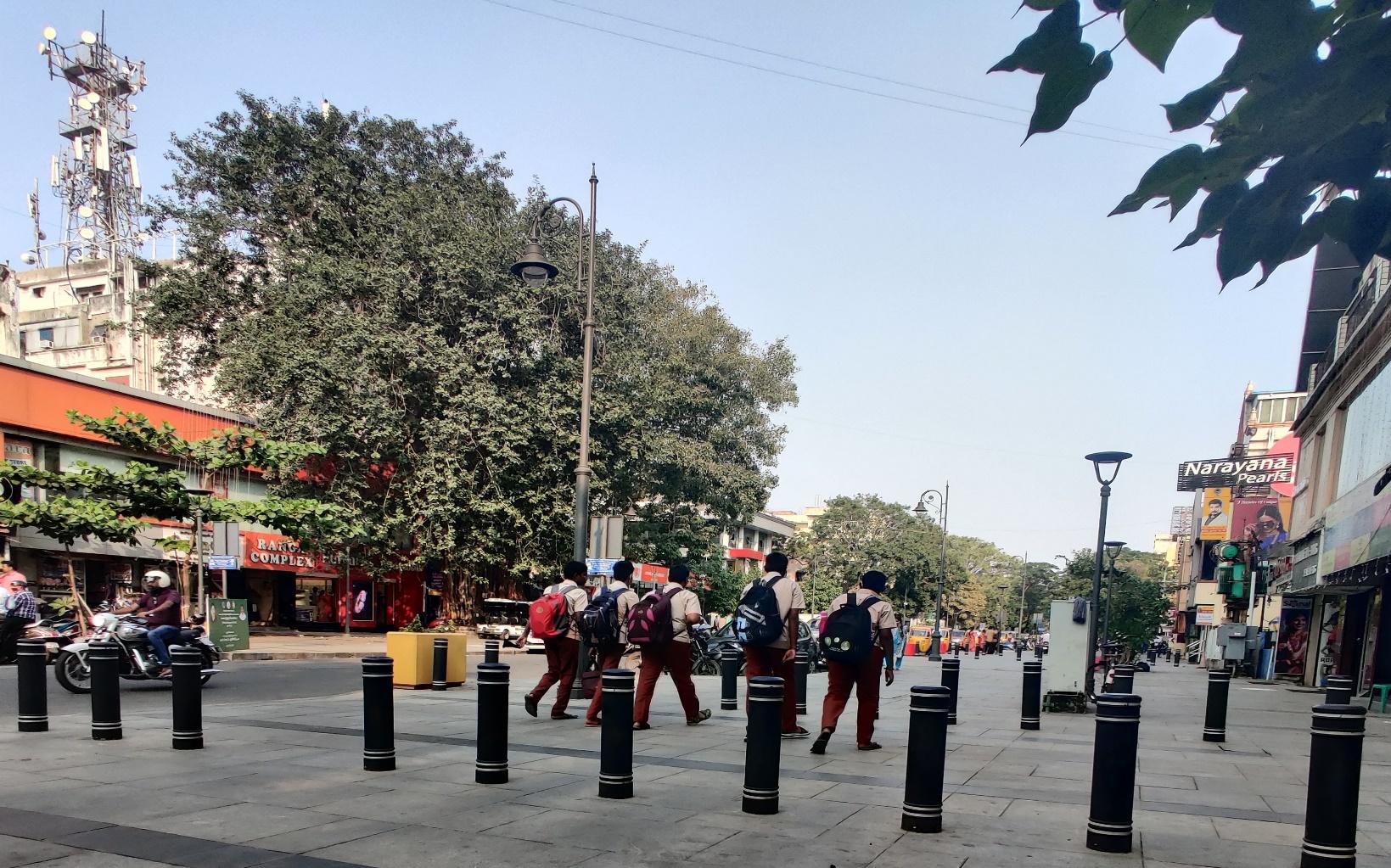 Tamil Nadu has been taking an array of road safety initiatives especially for children, in recent times, including awareness campaigns, media outreach, mainstreaming road safety clubs in schools and colleges, and empowering children to become ‘super kid cops. The state’s capital has also witnessed the redesign of several school zones under the smart city initiative to facilitate continuous footpaths, and vibrant crossings coupled with measures of tactical urbanism since 2017. However, continued monitoring and evaluation of such measures are essential to scale up these road safety models at the district level across the state in order to collectively address the issues of child safety on Tamil Nadu’s roads.

We cannot afford to lose more young lives to learn our lessons time and again. Let us, therefore, sustain this vigour in promoting road safety for children by looking holistically at policy, road design guidelines, regulations for all kinds of vehicles used to carry school children, road risks, education and enforcement rather than looking through a unidimensional lens of road safety education. By doing so, Tamil Nadu will be able to eventuate its intentions in creating safer roads for our young lives.