Have you ever observed what is left when you burn any stuff? Mostly ash, right? Similarly, when coal is used for electricity generation in a thermal power plant, it produces Coal Combustion Residuals (CCRs) or coal ash. The coal mined out in India has higher ash content (25 to 45 per cent) in comparison with imported coal (10 to 20 per cent). According to the Ministry of Coal, the coal companies in India maintain 34 percent ash-content of the coal that is supplied to coal-fired plants through coal beneficiation or washing.

Table 1: Details of coal consumed and the average ash-content of coal utilised in India from the year 2017-2018 (Source: CEA, Annual Reports).

What are the different types of coal ash?

Other types of by-products are also formed such as fluidised bed combustion ash, cenospheres, and scrubber residues.

How does coal ash affect environmental and human health?

The huge amount of all forms of unutilised coal ash often end up in rivers and the ocean, leading to ecosystem degradation. Trace elements like lead (Pb), arsenic (As), mercury (Hg), cadmium (Cd), and Zinc (Zn) present in the coal ash make it ‘hazardous industrial waste’. However, it has been re-categorised as ‘waste material’ in the year 2000 by the Union Ministry of Environment in India, and thus, it is hauled away as solid waste. Many accidental spills of coal ash from coal power plants and during coal ash transportation have been reported, which pollute waterways, groundwater, drinking water reservoirs, and the air in India. Such spills also affect the health and livelihood of local residents.

In 2009, the 100 per cent Fly Ash Utilisation Notification was published by MoEF (Ministry of Environment and forest) to reduce this waste from the site by making a common target of transporting 100 per cent of the fly-ash generated at all coal power plants in India. The fly-ash is utilised in producing and utilising “fly-ash based” products like bricks, cement, tiles and blocks in the factories within 50-100 km of the coal power plant. From the date of issue of the notification, existing power plants were given a timeline of five years and new coal-fired power plants were given a timeline of four years from the date of commissioning, to achieve the target. However, the coal thermal power plants in India have failed to achieve the target of 100 per cent fly ash utilisation even nine years after this notification came into force (figure 1). 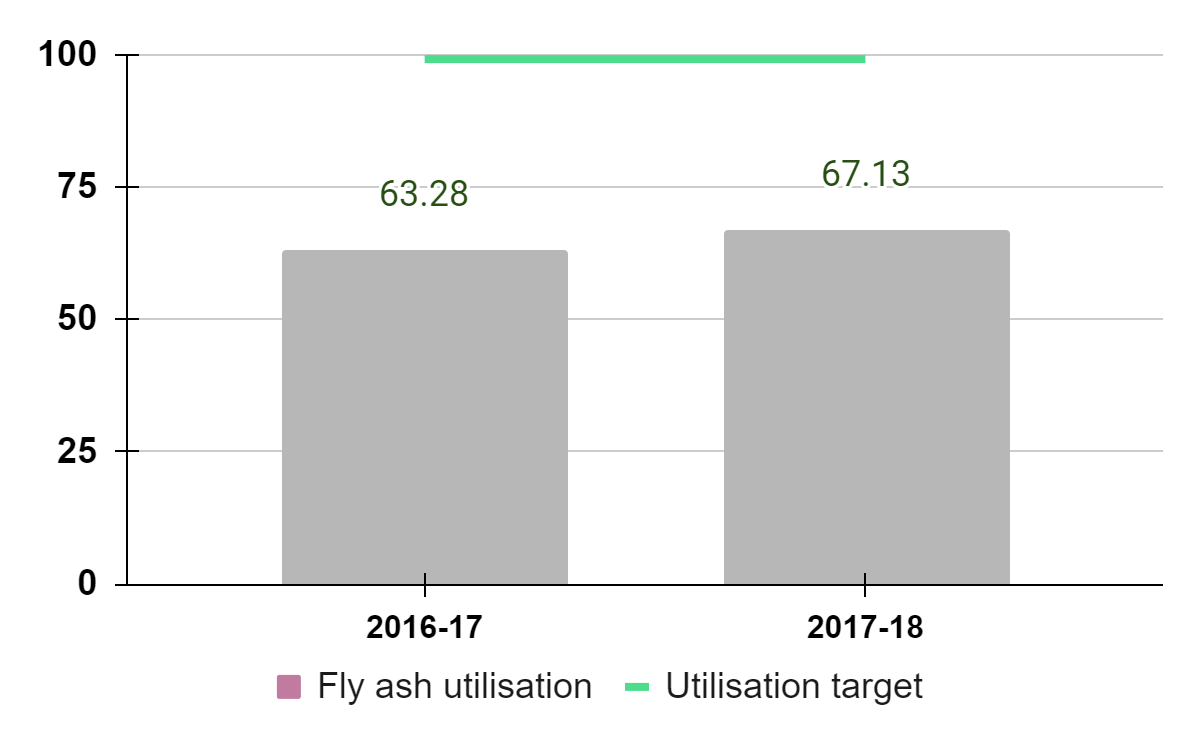 The other types of coal ashes like bottom ash and boiler slag are collected into the ash-pond, which is separately constructed into the marked territory of a coal-fired power plant and is surrounded by an embankment.

What are the remedies for the rising coal ash burden?

Coal ash recycling is essential to reducing contamination of food, water, air and soil, as well as, for the good health of local communities. Therefore, the 100 percent coal ash utilization rule should be strictly followed by coal power plants by repurposing the coal ash through well researched, eco-friendly and cost-effective methods. Accountability should be fixed on the coal-fired plants in achieving 100 percent fly ash utilisation, along with effective legal enforcement in case of failure to comply with the norms for fly ash storage, utilisation and disposal.

In order to achieve Sustainable Development Goals (SDGs) like ‘Life on Land’, ‘Life below water’, ‘Good Health and Well-being’ and ‘Climate Action’ by 2030, it is crucial that we manage coal ash better. While strict enforcement is needed, local communities and civil society organisations could be involved and trained in monitoring and reporting the coal ash spill, pipe leakage and inappropriate disposal. This will help local communities living near ash ponds to evacuate on time in case of a sudden burst of an ash containment pond thus reducing economic losses. However, the role of finance, technical capability and external factors in determining the success of a community-based monitoring approach to prevent accidental coal ash run-off into rivers, croplands etc., needs to be further explored.