Evidence that links Trans fatty acid (TFA) consumption with cardiovascular and other related diseases are growing in the last few decades. A recent study by the Centre for Disease Control and Prevention (CDC) estimates 15 countries that attribute to high TFA intake and account for 80% of deaths due to coronary heart diseases.

Although a few countries have banned TFA from their food supply, it has become necessary for a global TFA ban in order to promote a healthy lifestyle. This article will help you understand the policies and measures taken in various countries against TFA.

In 1994, the Danish Nutrition Council (DNC) concluded that TFA has negative health impacts    on the high-risk groups of Danish populace. A continued pressure was exerted on food industries and politicians to bring in policies that limit TFA content in oil, fat and food. By 2001, the country’s population consumed an average of 25g TFA per day through margarine and other processed foods. After reducing TFA content in margarine from 6g to 1g, the Danish Ministry of Food and Agriculture decided to pass a legislation to further reduce industrially produced TFA [1]. In 2003, Denmark was the first country to impose a maximum of 2g TFA per 100g of oil and fat and permitted industry to claim ‘free from TFA’ status for food products less than 1g TFA per 100g of oil/fat used during production [2].

At the same time, a voluntary national program to reduce TFA was adopted in Canada, the United Kingdom, the United States, and the Netherlands. Canada undertook an approach to monitor the mechanism, recorded public statements about progress, and promised for mandatory regulations if and when the industries fail to meet the targets [3]. In the UK, a voluntary promise was taken to eliminate industrial TFA by the end of 2012. Restaurants and popular food retail business operators agreed to this commitment, yet many health professionals were not satisfied with the voluntary nature of it. In the meanwhile, the voluntary program turned out to be  unsuccessful in the US. Therefore in 2006 and 2007, New York and Philadelphia Councils imposed TFA regulations, applicable mainly in restaurants. In New York, restaurants had to reduce the TFA contents to 0.5g per serving and take off other food items that exceeded the limit. In Philadelphia, commercial kitchens had to forbid TFA usage while pre-packed foods had no such restrictions.

In 2007, Argentina implemented the law to reduce industrially produced TFA to 2% in vegetable oils and 5% in other fats. The country mandated labelling of trans fatty acids in  food products based on the recommendations of a Task Force set up by Pan American Health Organisation (PAHO) [4]. Chile and Ecuador have limits up to 2% TFA in oil, fat and all other foods. By 2009, 8 South American countries including Paraguay, Uruguay and Brazil had mandatory labelling of TFA levels.

Following Denmark in the European Union, Switzerland tested 120 food items for TFA levels and found that one third of them contained excessive TFA amounts. Thereby, in 2008 the second European nation to set a limit of 2g TFA per 100g in oil and fat was Switzerland [2]. Countries like Austria, Hungary, Iceland, and Norway applied 2% TFA limits in oil and fat that are used during food production.

In 2008, California was the first state in the US to introduce a Bill to reduce TFA in margarine, oils, shortenings, etc. Since 2011 the law applied to deep fried oil as well [5].

By the end of 2018, serious measures were taken by low- and middle-income nations apart from strict implementation in high income nations, as increasing heart disease rates underscored the need for global elimination. Steps taken by some of the countries include: 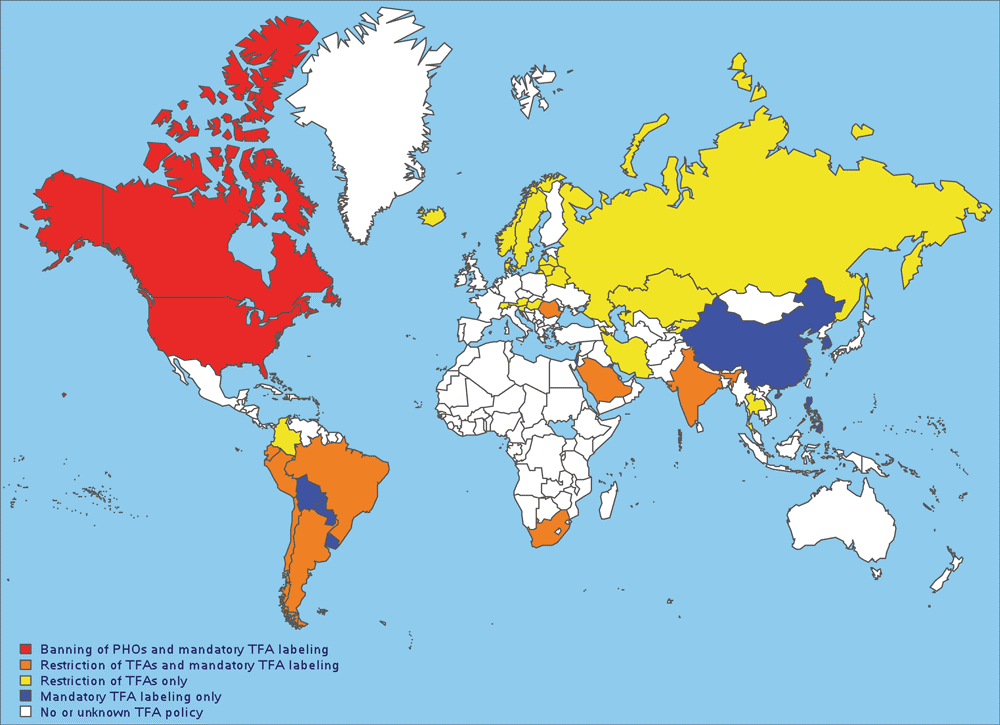 In May 2018, the World Health Organisation (WHO) released REPLACE, a step by step guide for elimination of industrially produced TFA from global food supply by 2023.

Tireless efforts of organisations like Global Health Advocacy Incubator paid off with Brazil and Turkey enacting the regulations on trans fats recently. In December 2019, Brazil declared its trans fat regulation that will cap trans fat at 2% in refined vegetable oils and foods by July 2021 and passed a regulation to ban the use of partially hydrogenated oils (industrially produced TFA) from January 2023 [7].

In May 2020, Turkey announced the trans fat regulations as per WHO recommendations which will come in effect from January 2021. Accordingly, food reaching final consumers and for retail supply should not contain more than 2g of trans fat per 100g of fat [8].

In India, Food Safety and Standards (Food Products Standards and Food Additives) Regulation 2011 notified by the Food Safety and Standards Authority, fixed a maximum limit of TFA to be not more than 10% by weight. Subsequently, in 2015, the regulations were amended to reduce the TFA limit to 5% in oil, fat spread, margarine and shortenings. India launched a mass media campaign ‘Heart Attack Rewind’ and aims to eliminate TFA in the food supply by 2022, a year ahead of WHO’s mandate.

The government should work towards its commitment in eliminating TFA from the food. Effective implementation of Regulations is the key. It is a multi-sectoral issue and can be solved through collaborating with NGOs, healthcare sector, media, public policy-making, etc. Finally, it is also an individual's responsibility to have control over what to eat.