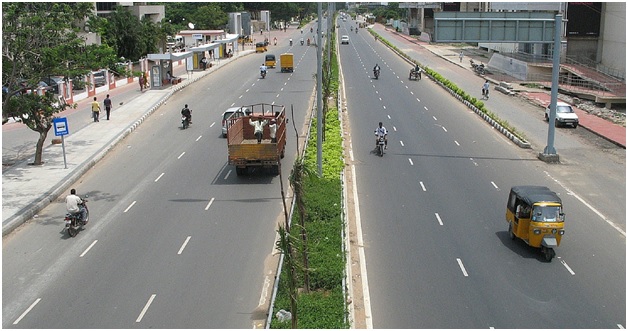 Before India first began her highway expansion project, not so many years ago, driving even at 50 km/h was an impossible venture. We either minced our way around narrow city roads or ventured on to highways, with great trepidation, for there was no saying what lay around the corner. Highways would widen or narrow at will, often coming to an abrupt and inexplicable end. Only those with that strange combination of bravado and stupidity would dare race on those. More importantly, we knew the importance of taking care on them, for there was no saying what lay beyond the bend - a bull drawn cart or a speeding lorry.

All that changed when we were given our very own motorways, four lanes of tarmac, designed to increase our speed and lower our chances of a head on collision. India was now ready for people driving from Chennai to Bangalore for no reason other than that they could. Deigned to speed up our economy, it appears these new roads have also speeded the demise of common sense. Because a small population of India can now afford fast cars that need fast roads, we are willing to outcast the simple cyclist and pedestrian, all in the name of just getting there sooner.

The Parliamentary Standing Committee for Transport, Tourism and Culture, comprising, arguably the brightest of Indian minds, in its recommendations towards the amendment of the Motor Vehicles Act has submitted that non-motorised traffic (NMT) which ‘create a nuisance’ must be banned from the National Highways and main roads of metro cities. This suggestion has found its way into the Motor Vehicles Amendment Act 2017 that was passed by the Lok Sabha in its last session. The Act gives States the power to (make rules) to regulate the activities and access of non-motorised traffic including pedestrians to public places and as a result national and state highways.

Now, there are two aspects to this proposed ban and let’s consider each in its turn.

National Highways: Our national highways are the Indian counterpart of the British motorway, the Italian autos trade or the American freeway. It is true that on all of these roads, non-motorised traffic is banned. But it is also true that the design of these roads is such that they are truly built for speed. For one, there will be no houses that open out onto a British motorway. Have you considered the number of little hamlets, towns and cities that our national highways cut across? As a case in point, the famed Mount Road in Chennai, a throbbing artery of the city, carrying the most mundane of commuters, just people travelling to work, shopping or visiting friends, is actually a national highway! While it is true that in at least some of the cases, it was us indomitable Indians who decided to build a house right on the edge of a highway, it remains inevitable that now that it has been allowed, we will need to carry it through to its meaningful conclusion – we cannot ban people who live along the road from walking on it. This is no exaggeration, but there are highways across the nation that actually have pedestrian crossings drawn across it. Why were they put there, if even at the time of installation, people did not already live on either side of it?

And what about the old man on his cycle, making his daily trip to the toll booth, clutching his prized possession of peanuts in a packet which he will sell to impatient passengers flying on diesel wings? Banned or not banned? And what about the women, wielding brooms, bent over double as they clean our highways, as we swerve honking around them? Banned or not banned?

Another point to be made is that the British motorway, for example, does not allow several types of motorised traffic also on its roads; for example, motorcycles under 50cc. Slow vehicles carrying over-sized loads need special permission and escort vehicles if they are allowed to use it. There appears, therefore, a clearer objective in mind when banning certain types of vehicles. It is not rocket science that that tanker carrying tonnes of fuel and climbing the slightly steep inclination on a highway, at a snail’s pace, just as I am leaving Chennai in something of a hurry, is as dangerous to me (or a nuisance, as the parliamentary standing committee would have so politely put it) as a slow bull-drawn cart. That one is motorised and the other, not, is quite frankly, pointless.

This now brings us to an important question about attitudes. How do we, as road users, see these highways? If, in what is, unfortunately, becoming a cultural badge of honour, a streak of superiority leads us to believe that highways were built for our convenience; that a nation of one billion somehow owes us, a small minority, a corridor of speed, safety and comfort, never mind how the others get there, then all but the crème de la crème can and must be banned.

City main roads: A recommendation to ban NMT from city main roads, is even harder to believe. If this ban was to be implemented, one thing is for sure – not many people will make it work that day. Can the cleaner, the ward boy and the security guard afford wheels? Let’s argue, for argument’s sake, that we develop our public transport to the highest degree. Does even the bus passenger not become NMT the moment he steps off the bus? This can only be explained as a poorly thought through the move. In a nation where only 13% of the population use a motorised form of transport, how the committee foresees limiting the services of the rest of the population, for the nuisance they have become, is laughable.

It is easy to see that India, in her diversity, is not a nation which we can streamline to our convenience. Not at this point in our journey as a nation anyway. It only takes a casual cruise around our highways to see how diverse the life around it is. This is not the time to think of them as speedways; right now, they are merely conduits in a nation which is still grappling with immense inequalities between the haves and the have-nots. While it is true that the committee is trying to find solutions to some difficult problems, viewing NMT as the problem itself, can only be described as the lazy way out. Several other nations around the world have successfully trialled and employed ingenious measures to protect the ‘unruly’ pedestrian - and it is disconcerting that the committee feels a move to ban them, as the best they can come up with. One solution that will certainly work and is urgently needed is an attitude check - a reboot of our speed systems that currently tell us to put our foot down the moment we hit the highways. Instead, treat it as any other Indian road - a vista to a journey full of surprises! Maybe the time we take to readjust our perceptions will give our planners a chance to re-evaluate their positions; another chance to come up with systems and structures which will actually solve our traffic problems.

In spite of the Union Minister for Transport, Nitin Gadkari’s reassurance that "There is nothing like this. I can tell you as the transport minister that we want to promote cycling", the door to banning NMT has been opened. The Act, expected to be passed in the upcoming monsoon session, is likely to get the President’s assent. If this worries you, write to the Rajya Sabha MPs from your state asking for Section 138 (1A), which has been added in the MV Amendment Bill 2017, to be deleted entirely. Alert citizens will need to watch this space closely for developments. Hopefully, we will continue to be that country that throngs with two feet, two wheels, four wheels and more.