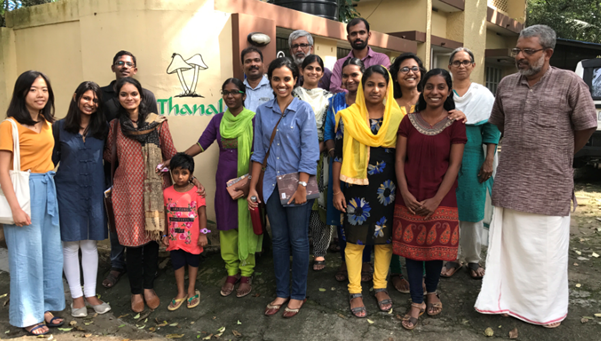 Team CAG with team Thanal at their office in Trivandrum

From 14 to 16, October 2017, CAG’s Zero Waste Team, composed of Ariel, Durga, Kripa, Samantha, Sriram, and Sudipta, went to visit Thanal in Trivandrum. This was for the team to understand how Thanal has been instrumental in helping the Thiruvananthapuram Corporation set up an effective zero waste management system in place.

There were several qualitative and quantitative lessons we drew from this trip, of which, the most prominent was that waste in India is generally considered as a disposal issue. However, proper management of waste needs to take into account its entire lifecycle as well as the different stakeholders involved in its creation, use, and management. This is why Thanal’s Zero Waste Centre was a precious takeaway for the team. It is a resource recovery centre that functions as a training centre for women to learn tailoring, craft making, and entrepreneurship, complete with a small retail outlet for the organic and sustainable products they create. This model of social empowerment through the generation of environmentally sustainable employment is useful team CAG to implement in Chennai.

We were also introduced to the Kudambashree programme, which is an example of employment generation for women in Trivandrum that also mitigates the waste problem. This programme, started and supported by the Kerala government in 1988, supports micro enterprises run by women. Through this programme, a group of 200 women have been appointed to collect enough wet waste from four wards to provide fuel for the Manacaud Biogas Plant to run a little office situated at site.

We saw the scope of social enterprises as well with our visit to Haritagramam. As a 3-year old enterprise, it has come a long way since its CSR funded start. It is now a for-profit company that caters to a shifting range of 2800-3600 households. Haritagramam started off with pipe composting for individuals to take care of their own waste. It began as a door-to-door campaign comprising of a strategic mix of school children, IAS officers and politicians to convince citizens to make the shift. It also gave waste pickers a social upgrade by training them as technicians to help householders with their composting. It has since reworked the flaws in design and shifted to kitchen bin composting. There were many such useful pointers with respect to technical issues and human interfacing from this encounter.

Considering that India’s composition of waste is largely biodegradable, a lot of our trip was focused around composting. We were shown examples of how different waste generators could opt for this option. Kowdiyar Manor, our first visit of the three, is a Resident Welfare Association that comprises of 60 households. In this large, well-to-do apartment complex, we were given information on composting in pits and the common challenges that came along with this. The compost is used for edible and ornamental plants around the residence. Their recyclables are also stocked together and sold off. The only downside from their management of waste is the treatment of sanitary waste which is simply burned, a common practice in Trivandrum.

The next composting we witnessed was of a bulk waste producer. Trivandrum Club with its multiple recreational activities, marriage halls and resorts produces at least a ton of waste a day. This waste, thanks to the strict regulations laid out by the government, needs to be managed onsite. We visited its compost site as well as its biogas unit. Compost is used for its terrace garden, where the yield of the plants are either used for the restaurants or sold off to club members.

The final composting example was a useful one since it caters to today’s fast-paced, cramped lifestyles. Jagathy Aerobic Composting Unit, a project by the Corporation, was inaugurated by Finance Minister Thomas Isaac. Households residing around the facility drop off their kitchen waste at their convenience (the opening hours were kept specifically long to accommodate different lifestyles). Compost is given off free of cost to those wishing to take it.

Aside from the valuable field visits we made during this trip, Mr. Shibu Nair shared a wealth of information, of which I will share only the core pointers. He attributed Thanal’s success to three factors: social engineering or its ability as an organisation to understand the strengths and weaknesses of every stakeholder. The second is democratisation or its firm stance never to weaken any government institution but strive to work together instead. And finally, what he called de-education: investing in inculcating any relevant skills, even social if necessary, so that you create an empowered and useful workforce. With its beautiful balance of qualitative and technical insights, it’s no wonder the team returned full of ideas and inspirations to put to test here in Chennai.