Diabetes and Front of Pack Labels

According to the International Diabetes Federation’s (IDF) Diabetes Atlas, one in six people with diabetes in the world are in India and according to the 2019 census, 1.6 million deaths were directly caused by diabetes. The highest risk factor for diabetes is high BMI, followed by dietary factors, tobacco, sedentary lifestyle and alcohol consumption (1). Diabetes can damage heart, nerves, eyes, kidney, liver and cause two to three-fold increased risk of non-communicable disease (NCD) like heart attack and stroke. With NCDs causing more than 62% deaths in India (2), it is high time that consumers are conscious about their sugar, fat and salt consumption as they are the major contributors to NCDs.

Consumption of HFSS food contributes to diabetes in the following ways: 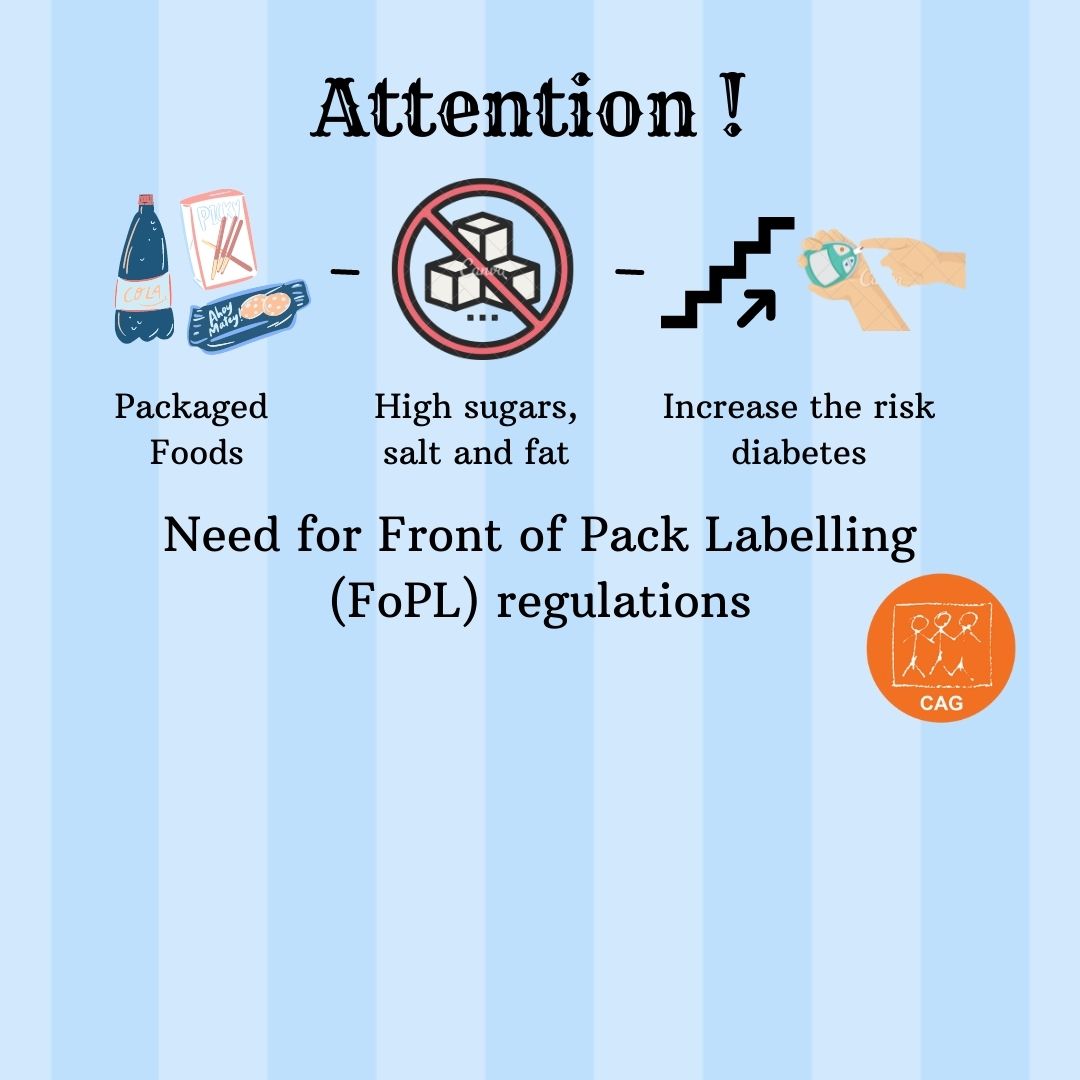 With an increased consumption and dependence over packaged foods during the last few years, and packed foods conveniently having low to no clear information on the packets, consumers fail to recognise the need for knowing what is inside the packet. While predominantly all packaged foods have nutrients like salt, sugar and fat in them, the levels are unpredictable (often high).

In 2019, the Indian Academy of Pediatrics (IAP) approved that the JUNCS foods should not be offered/given to children, keeping in mind the concern of diabetes, obesity and other NCDs in children. JUNCS stands for Junk food, Ultra processed food, Nutritionally inappropriate food, Caffeinated/coloured/carbonated beverages and Sugar/sweetened beverages. These foods have high fat (saturated and trans fat), salt and sugar (HFSS) content that neglects the balanced diet and has the potential to increase the NCDs associated risks  in children and adolescents (3).

Therefore, it becomes essential for everyone, especially the diabetics, to be clearly told about the levels of harmful nutrients present in the food products in order to help them make informed choices. This calls for an immediate notification and implementation of a simple and effective Front of Pack Label (FoPL) regulations in India. FoPL is a labelling and warning system present on the front side of a pre-packed or processed food, that helps consumers choose healthier products. It warns about the amounts of fat, salt, sugar and energy present in the food products.

FoPL helps in identifying HFSS foods through warning labels/symbols on the front side of the packet. With India leading in diabetes after China, children and young adults are increasingly prone to unhealthy lifestyles and they are at higher risk for diabetes and associated disease. The nutrients of concern present in processed food are often ignored or hidden behind the false claims made for such food products. Such incidents can take a back step when regulations like front of pack labels are effectively implemented and monitored for compliance. The Food Safety and Standards Authority of India (FSSAI) is working on it and we are hopeful that they will come out with simple, clear, effective and consumer friendly FoPL regulations soon, that would be beneficial to the Indian consumers.