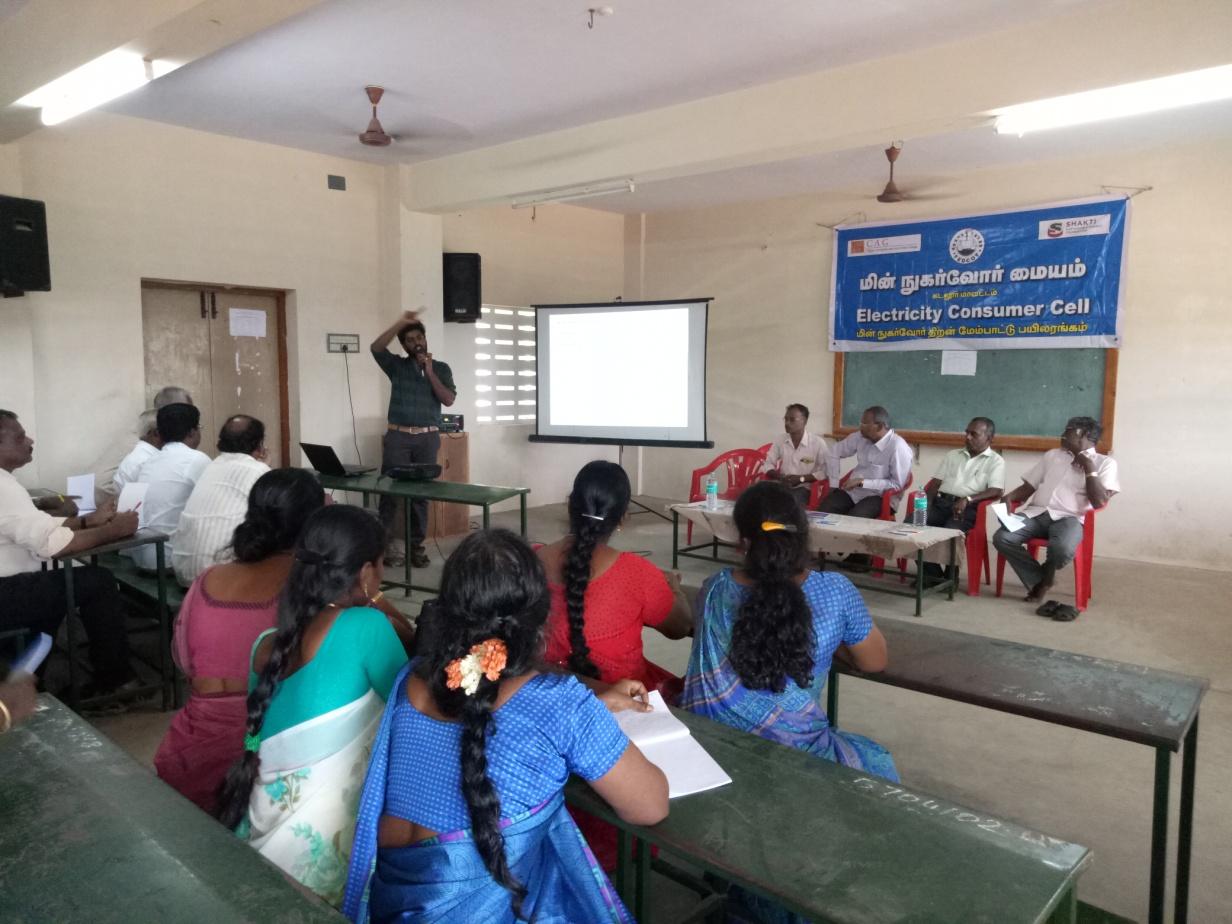 Mr. Selvaraj, Chairman, Federation of Consumer Organisation Tamil Nadu and Pondicherry (FEDCOT), addressed the participants about the importance of energy conservation. He explained about the objectives and functions of Electricity Consumer Cell, Cuddalore. He explained the strong cordial- relationship with TNEB officials, which helps the ECC members to resolve complaints. He instructed the participants to register the written complaints with the Assistant Engineer (AE) and not to the field staff because once the complaint is registered with the AE, he is answerable to the higher officials. 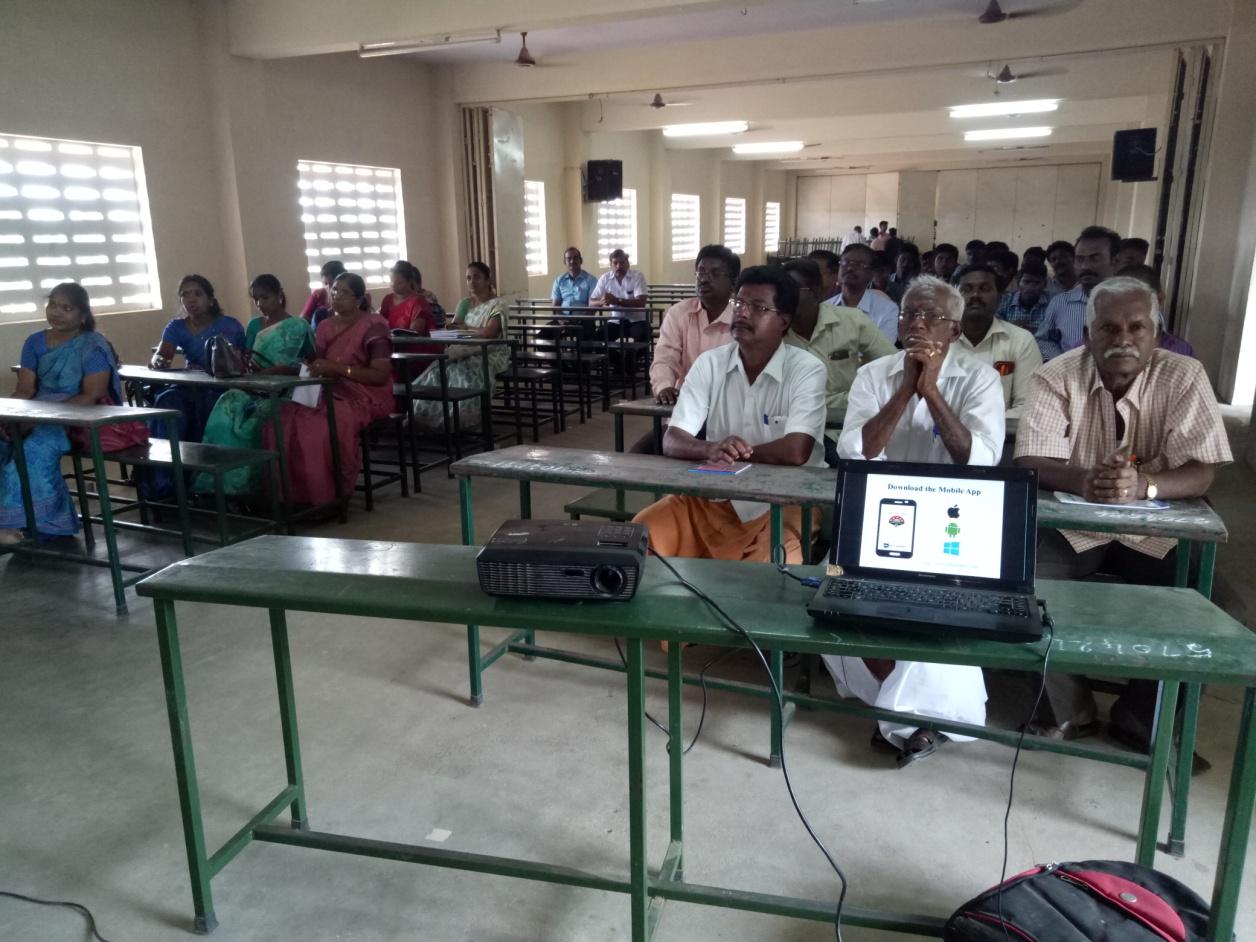 Mr. G.N. Bharath Ram, Researcher, CAG, made a presentation on energy efficiency and energy conservation at the household level. He listed out inefficient devices that consume high electricity and suggested that they are replaced with the latest energy-efficient devices. The presentation focused on the Standards, Energy Star Rating and labeling programme on the energy-efficient home appliances prescribed by Bureau of Energy Efficiency (BEE) such as air conditioners, refrigerators, washing machines, fans, TVs, bulbs., which the participants must know before purchasing products.

Mr. Ambikapathy, Coordinator, ECC Cuddalore, concluded the session with a vote of thanks. 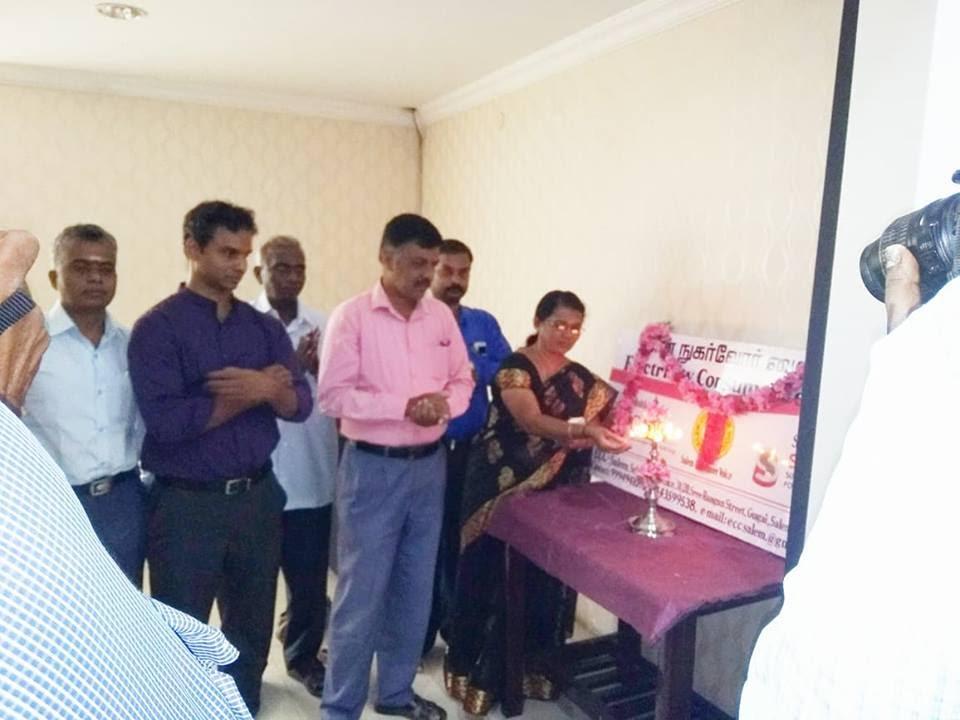 Mr.J.M. Bhoopathy, President, Salem Consumer Voice, welcomed the participants and gave an introductory speech on the purpose of conducting the capacity building programme. He further explained the relationship with TANGEDCO officials in solving the electricity complaints. 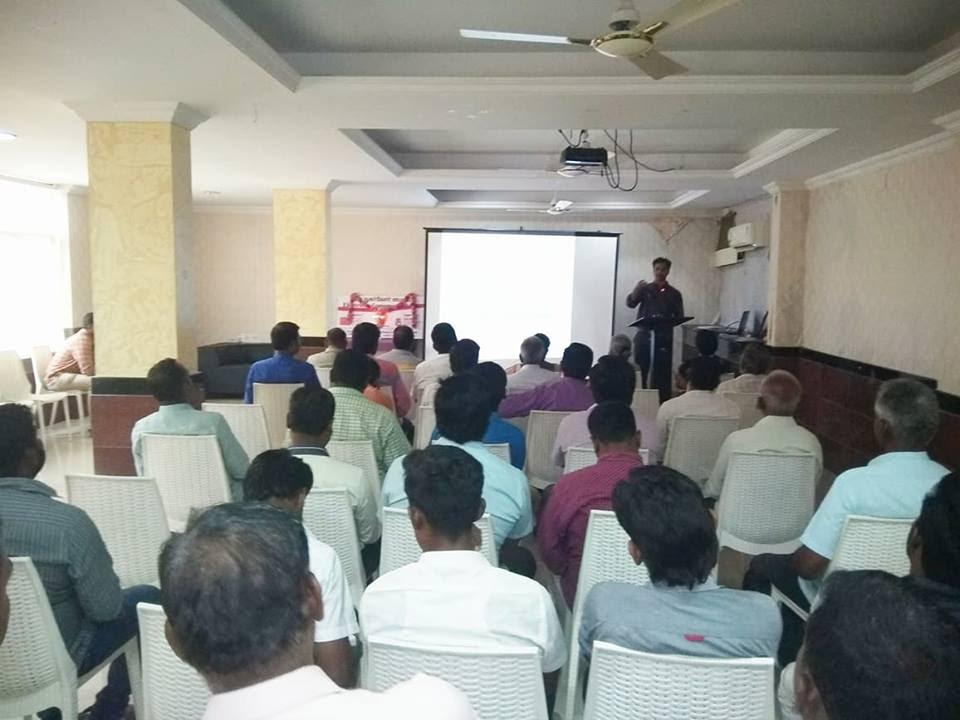 Mr. Vishnu Mohan Rao, Senior Researcher from Citizen consumer and civic Action Group, made a presentation on the objectives, functions and working structure of ECC. He further explained the work of ECC in Tiruvallur, Cuddalore, and Tirunelveli. He focused on the role of ECC in supporting consumers address day-to-day electricity challenges and conducting the Outreach Meetings and capacity building programmes. 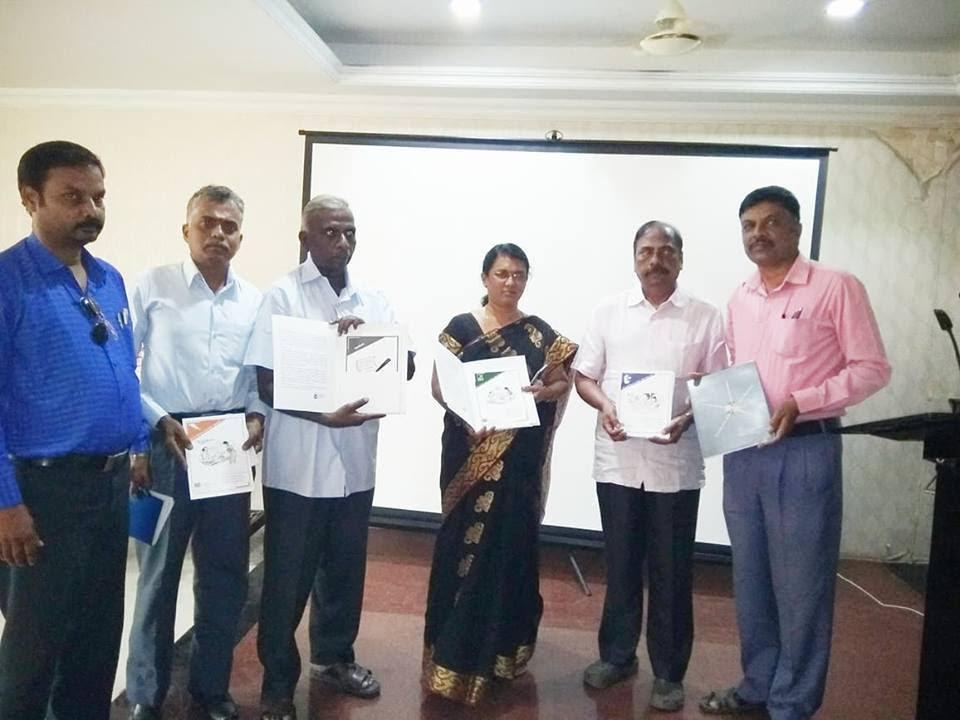 Sridhar S.I., Researcher, CAG, made a presentation on energy efficiency and energy conservation at the household level. He listed out inefficient devices at the household level, which consume high electricity and suggested that they are replaced with the latest energy-efficient devices. Further, the presentation focused on Bureau of Energy Efficiency (BEE) standards and labeling program of Govt. of India for energy efficient appliances (such as fans, TVs, refrigerators etc.). He gave an illustration of how to compare electrical and electronic appliances based on energy efficiency and monetary cost savings from BEE star labelled appliances vs baseline products when shopping. There were very interesting discussions with the participants and the questions, doubts were clarified.

Mr.Muthuswamy, Advisor, ECC Salem, concluded the session with a vote of thanks.

Electricity Consumer Cell (ECC) Tiruvannamalai in association with Sadayanodai Ilaignar Narpani Mandram (SINAM) organized a capacity building Programme on the title “Energy Efficiency” at Hotel Ramakrishna, Tiruvannamalai on June 19, 2018. The purpose of the meeting is to build the capacity on Energy saving and conservation to the consumers. The consumer from various areas such as women from Self Help Groups, commercial consumers, skilled laborers like Electrician, plumbers participated in the programme.  Mr. Rama Perumal, Secretary, SINAM welcomed the participant and briefed the purpose of conducting the programme in Tiruvannamalai. 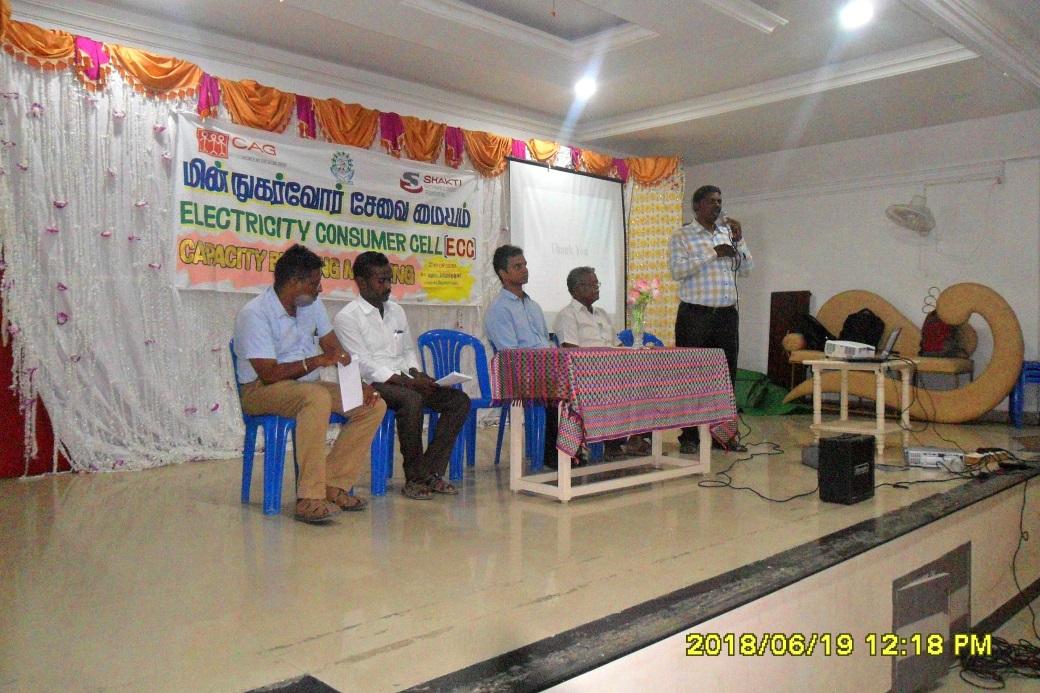 Mr. Vishnu Mohan Rao, Senior Researcher, CAG, explained the objectives and functions of ECC. He further explained in detail about the duties and role of ECC Members – ECC Advisor and ECC Coordinator. 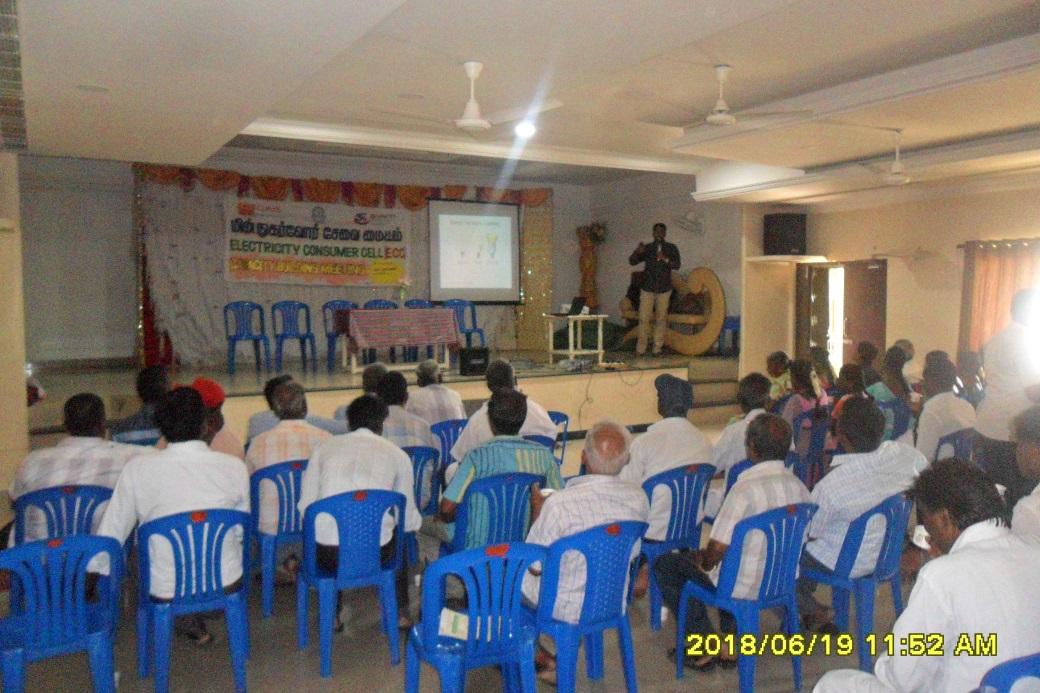 Mr. Sridhar. S.I., Researcher, CAG, made a presentation on energy efficiency and energy conservation at the household level. The presentation focused on the Bureau of Energy Efficiency (BEE) Star Rating, standards, and labeling program of Govt. of India for energy efficient appliances such as fans, TVs, refrigerators etc. He gave a comparative analysis of the electrical and electronic appliances based on the watts, volts. He further listed out inefficient devices at houses which consume high electricity and suggested that they are replaced with the latest energy-efficient devices. There were very interesting discussions with the participants and the questions, doubts were clarified. 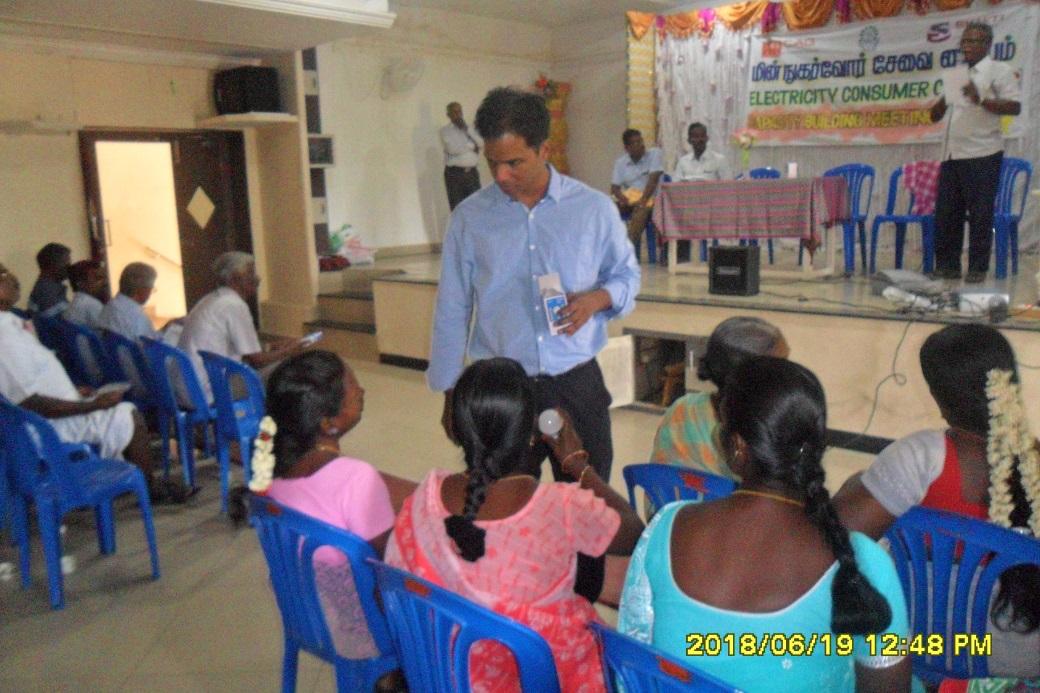 Mr.S.M. Venkatesan, Assistant Engineer, Tiruvannamalai, appreciated the effort taken by CAG in starting ECC’s, it will reduce the burden of 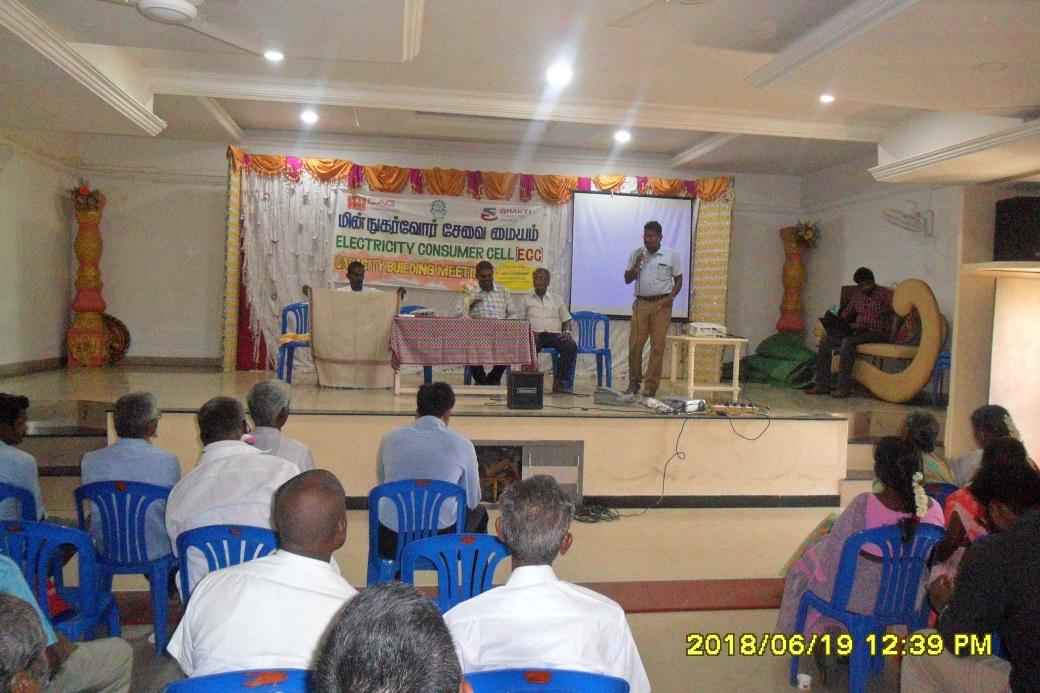 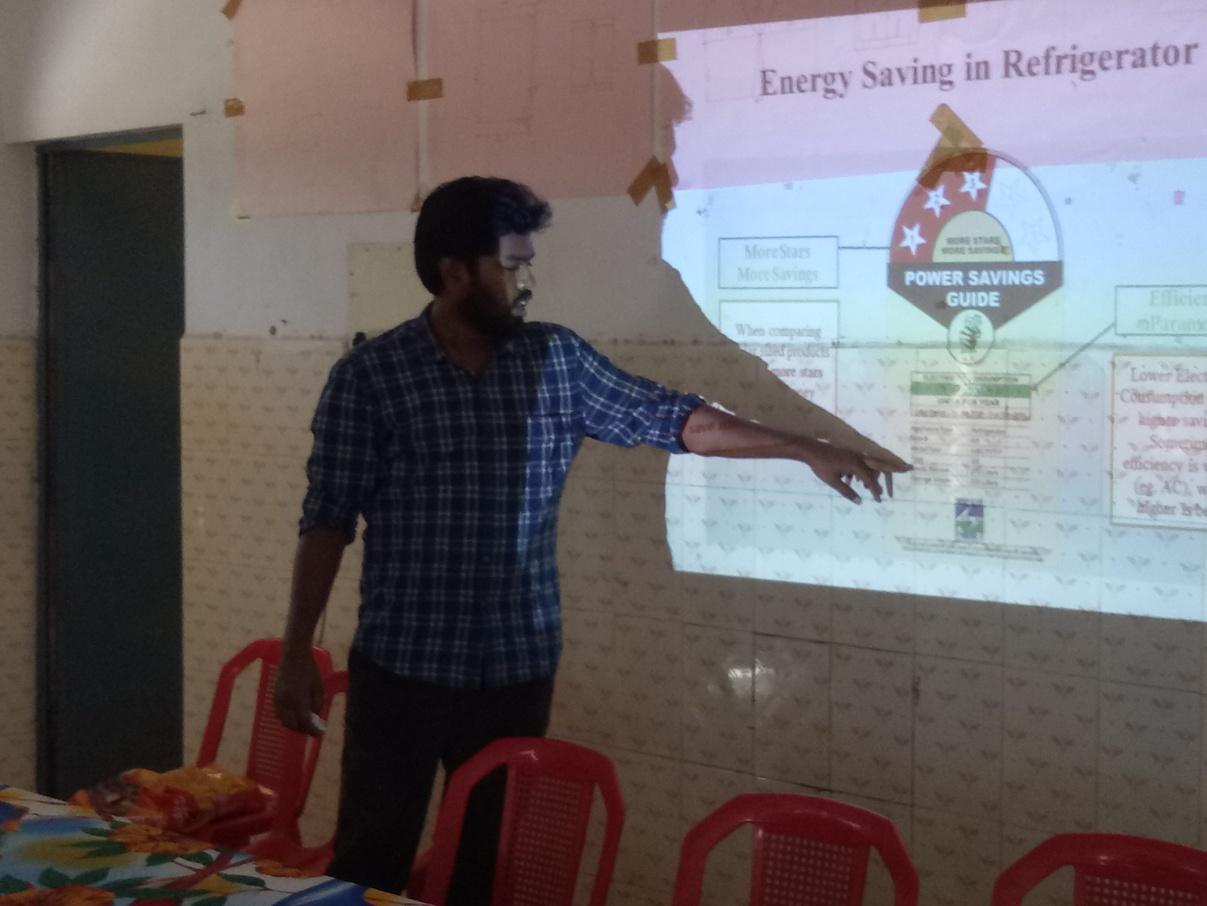 Mr.G.N. Bharath Ram, Researcher, CAG, made a presentation on energy efficiency and energy conservation at the household levels. He explained about the standards, Star rating and labels for the home appliances such as Air conditioner, Refrigerator, Television, Fan, Tube lights and Bulbs prescribed by Bureau of Energy Efficiency (BEE).  He also gave a comparative analysis on Energy efficient products such as LED Bulbs, LED Tube lights vs Normal Bulbs, Tube lights, which will create an impact in the electricity bill. He also clarified the questions raised by the participants on the presentation. 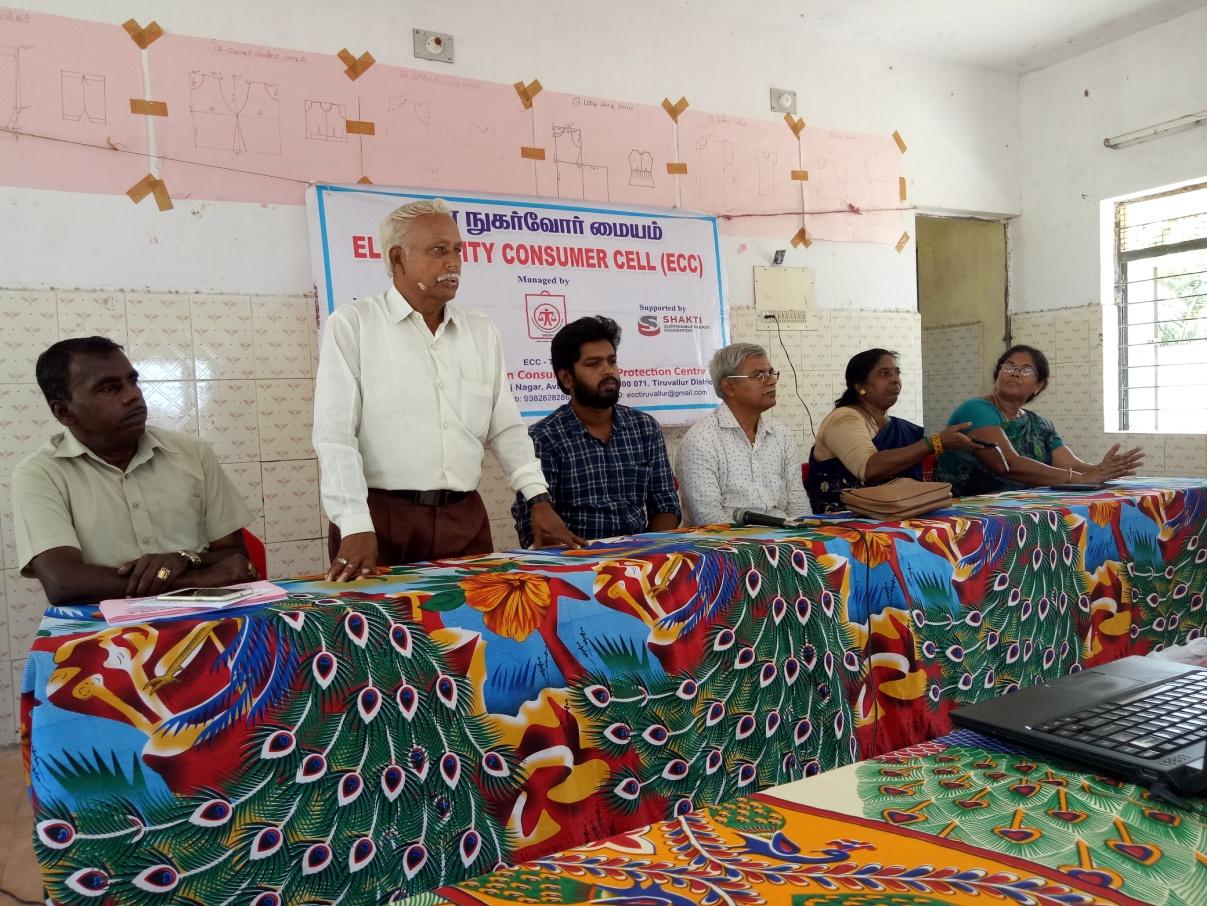 Mr. V.Ashokan, Advisor, ECC Tiruvallur, gave a detailed explanation of the objectives and functions of Electricity Consumer Cell. He described the type of complaints registered in the ECC and also explained the problem-solving mechanisms to the participants. He informed the consumers about the “Grievance Day” which happens every month at the District Collector office. All the higher officials of Tamilnadu Generation and Distribution Corporation Limited such as Superintending Engineer, Executive Engineers, and Assistant Engineers will attend the meeting.  Any complaint raised in the Grievance meeting will be solved based on the nature of the complaints also it will be directed to the concerned official for complaint history. 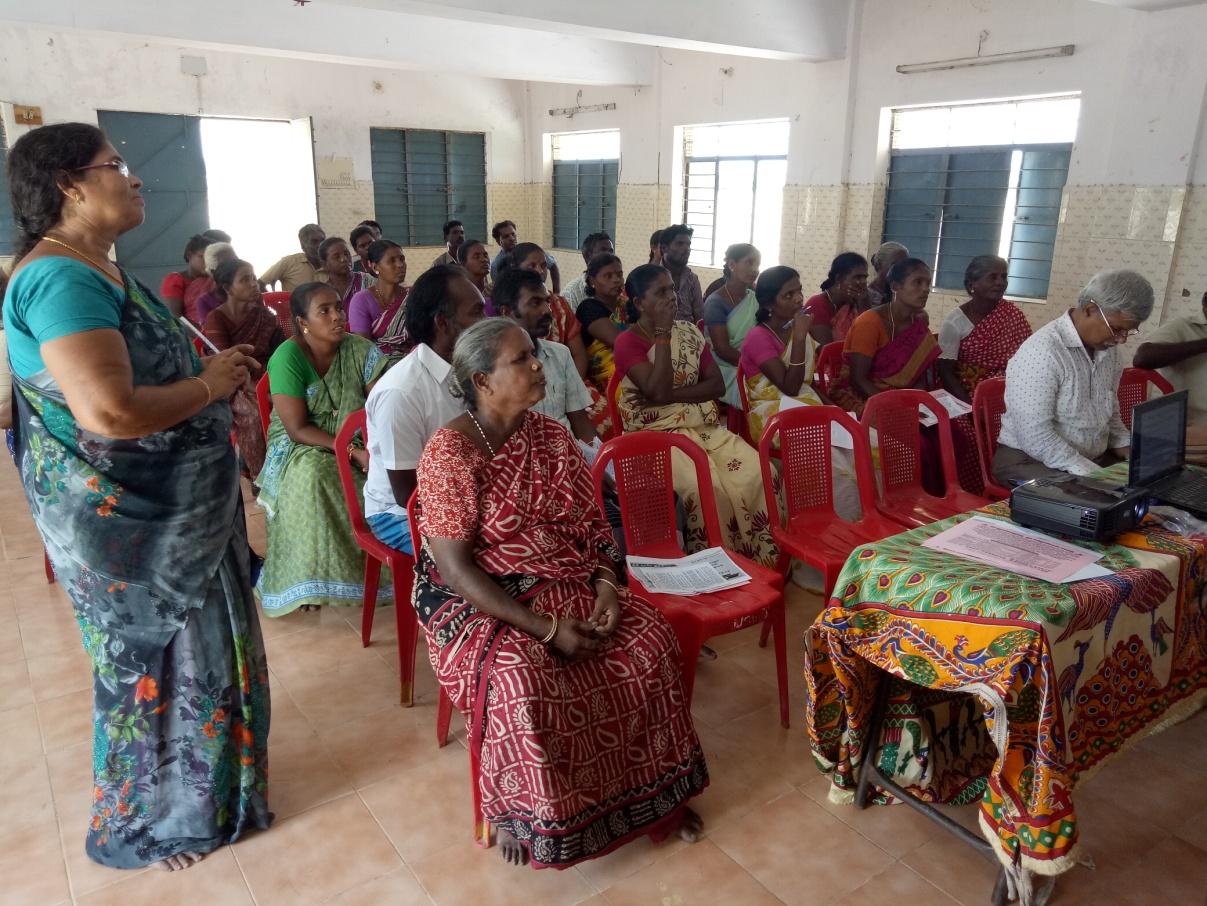 Mr.Nagarajan, Organizer, ECC Tiruvallur , concluded the session with a vote of thanks.

Electricity Consumer Cell (ECC), Tirunelveli, organized a capacity building programme on “Energy Governance” on June 21, 2018, at Tirunelveli Electricity Board Workers Retired Association, Thiyagarajar Nagar, Tirunelveli. The purpose of the programme was to build consumer awareness on energy conservation and to educate them about energy-efficient devices at the household level. Consumer groups, civil society organizations, and local residents participated in the programme.

Mr. Venkatachalam, Tirunelveli Consumer Protection Sangam, welcomed the participants and gave an introduction on the efforts of ECC Tirunelveli in supporting consumers address electricity issues. He further gave examples of how the ECC functions as a bridge between consumers and TANGEDCO. 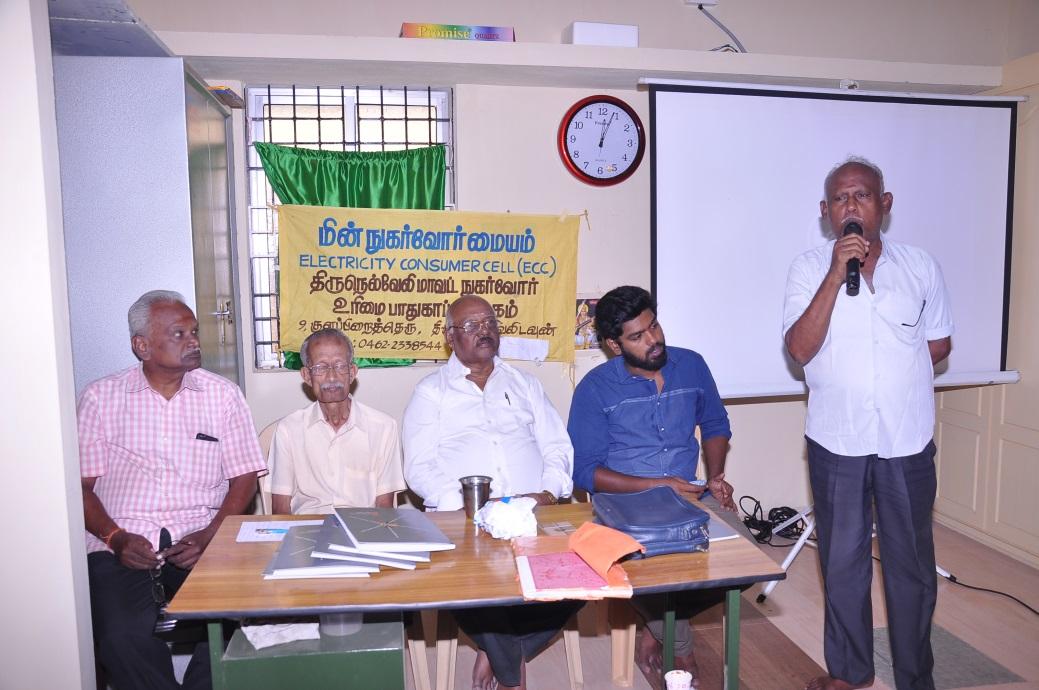 Mr. Shanmugam, Advisor, ECC Tirunelveli, explained in detail about his role in ECC. He explained about the problem-solving mechanism and the nature of the complaints registered in ECC. He gave some tips on how to use electricity efficiently and the benefits of solar power in energy conservation. He further advised the consumers to register complaints in written to the higher officials not to the field’s staff in order to avoid the losses. 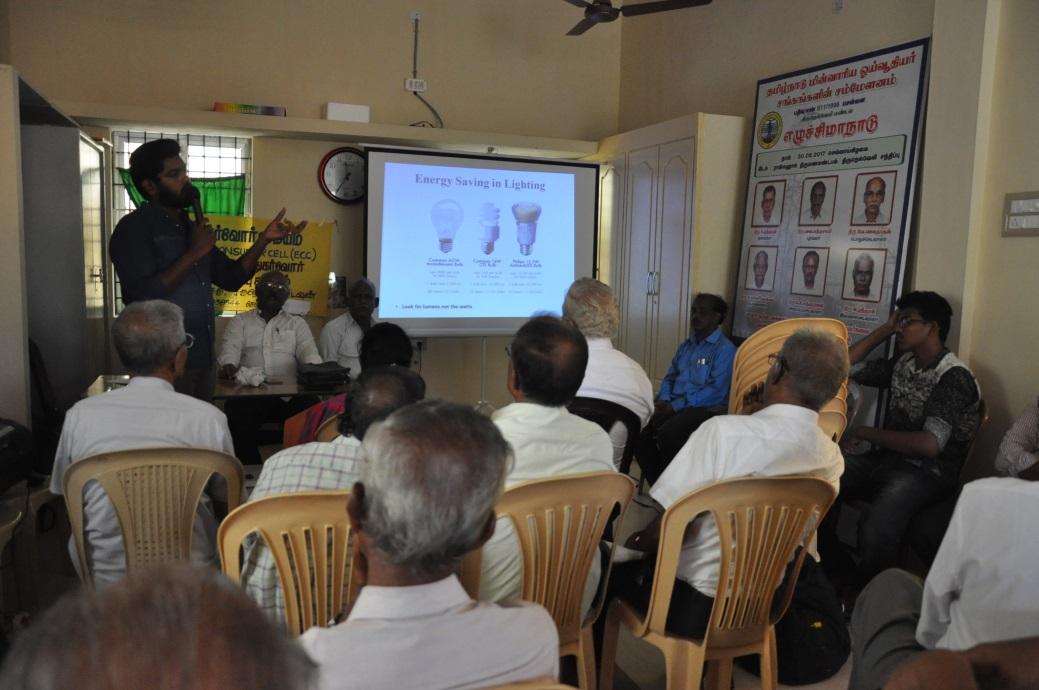 G.N.Bharath Ram, Researcher, CAG, gave a presentation on energy efficiency and energy conservation methods at the household level. He listed out the household appliances like air conditioners, refrigerators, geysers, fan, tube lights and bulbs that consume more electricity and suggested replacing them with the latest energy-efficient devices. He described a comparative analysis on how to save your electricity bill when a normal incandescent bulb is replaced with LED lamps. He further gave examples of simple energy-saving methods for the above-mentioned household devices. 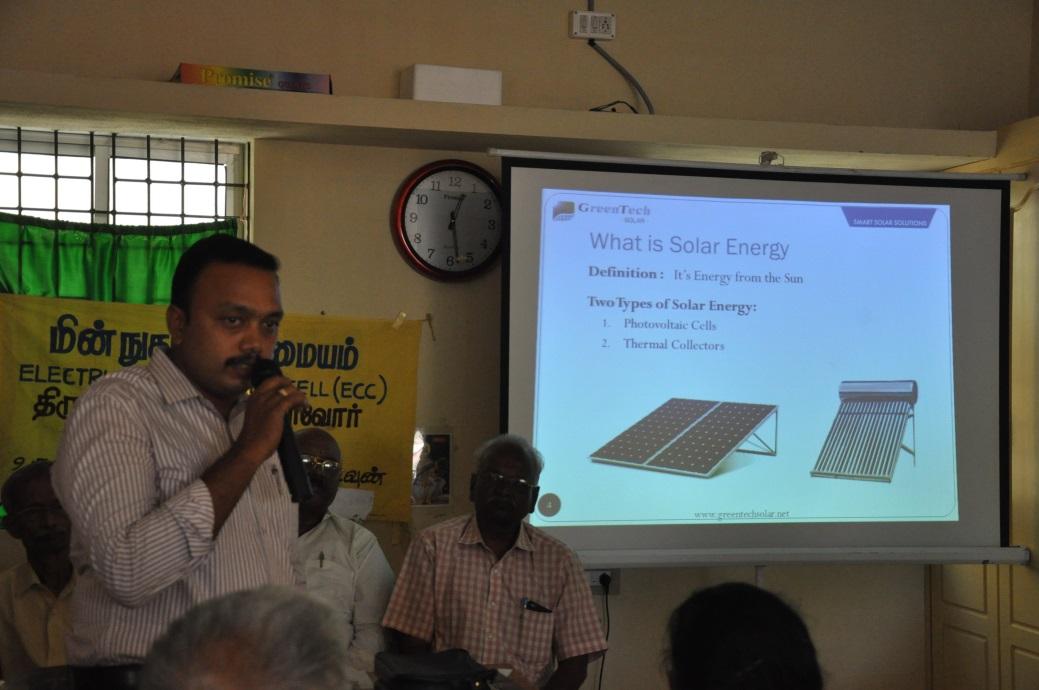 Mr. I. Anto Jeyarajan, Business Head, Green Tech Solar, gave a presentation on solar power for households. He talked about the application of solar thermal energy and rooftop solar photovoltaics for homes. He showcased some of the successful projects of Green Tech Solar at various locations with the help of Supervisory Control and Data Acquisition (SCADA) system. He also highlighted various subsidies available and net-metering benefits of using rooftop solar. 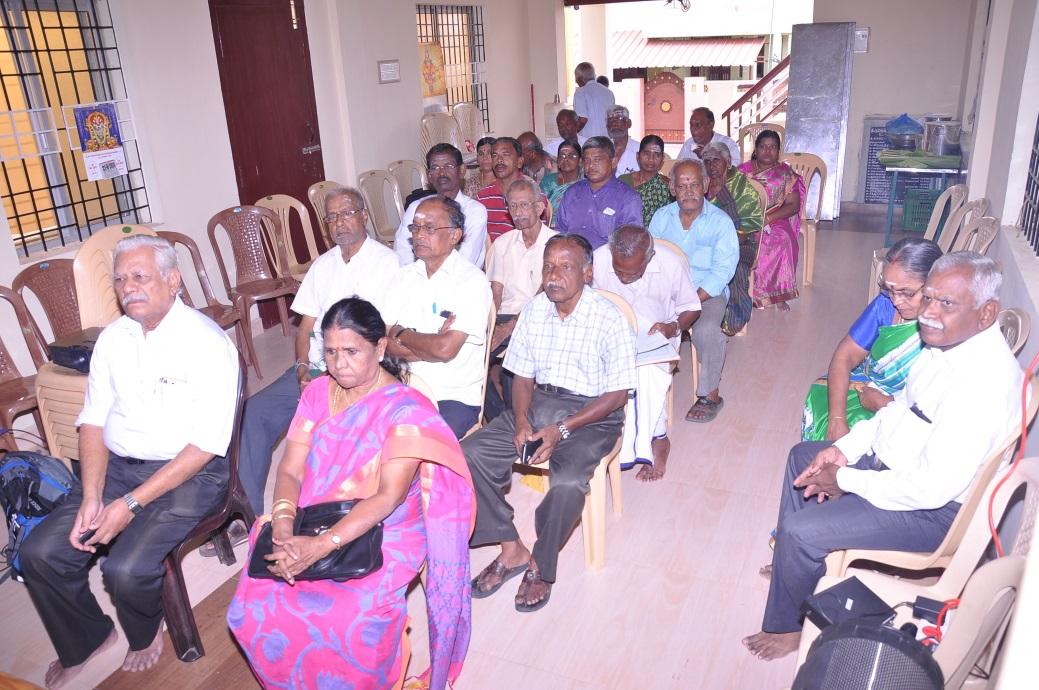 Mr. Sivasubramaniyam, Assistant Engineer, TANGEDCO, appreciated the efforts of CAG in implementing ECC at Tirunelveli. He explained about the reasons for frequent power cuts and power failure in Tirunelveli especially during the night time. He informed the consumers about the new feature for registering the complaints introduced by TANGEDCO through the latest technology by sending a complaint with photograph and location through “WHATSAPP”.

Mr. Muthuswamy, organizer, ECC Tirunelveli, concluded the session with a vote of thanks.

Electricity Consumer Cell (ECC) Salem in association with Salem Consumer Voice conducted outreach meetings at Karungalpatti (June 15, 2018) and Vellalapatti (June 25, 2018). The objective of the meetings was to create awareness on ECC, educate consumers about electricity rights, safety and governance to the participants. Agricultural consumers and domestic consumers participated in the meeting. 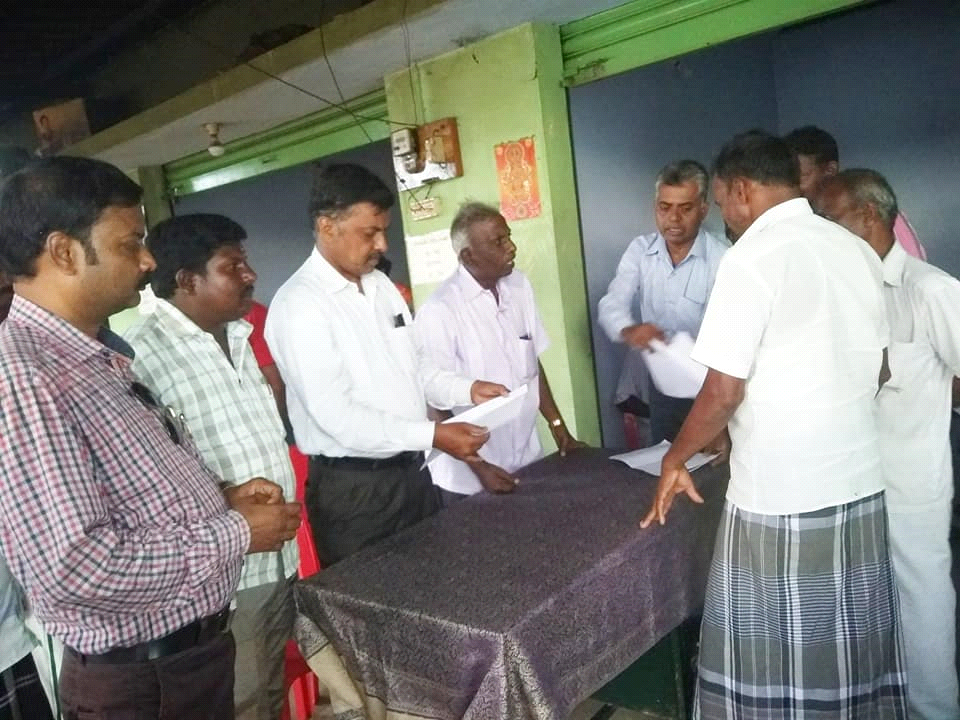 Mr.Muthusamy, ECC Advisor, Salem started the session by enquiring the consumers on Low Voltage, High Voltage, change of tariff, and Damage Posts. Few consumers complained about the voltage fluctuations and irregular dates of the Assessor for taking the meter reading which is common. He also explained energy efficient products like LED bulbs and LED tube lights, which are slightly costlier than normal bulbs but it will reduce your electricity bills by half. 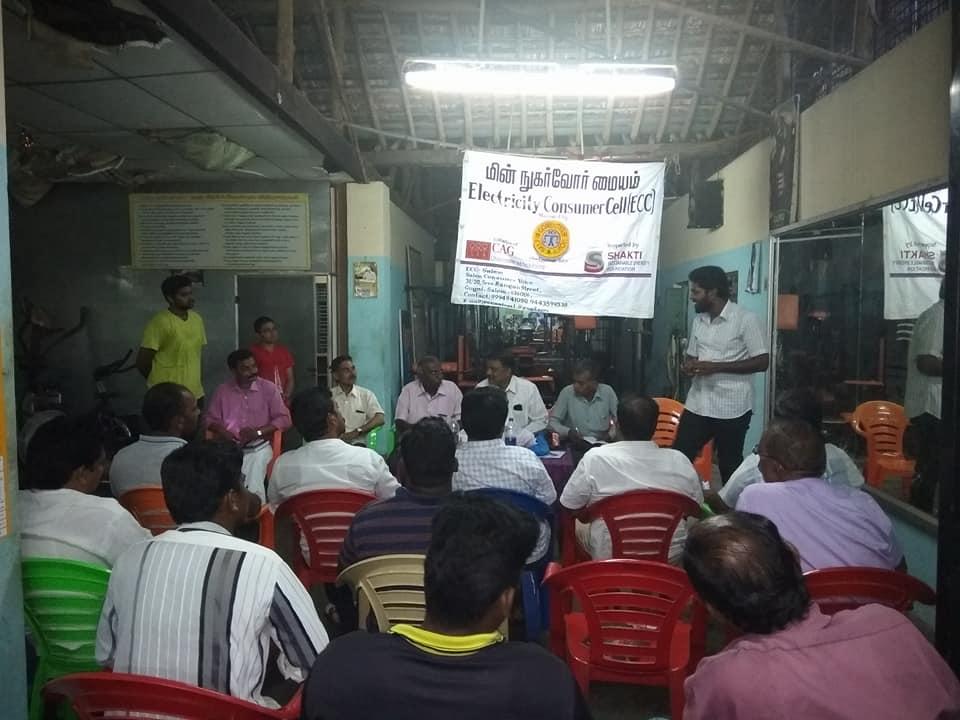 Mr.G.N.Bharath Ram, Researcher, CAG, briefed the participants about the objectives, functions and structure of ECC. All the electricity complaints can be registered to ECC in person or over the Phone, the complaints received are registered on the serial number and the follow up will take place periodically. 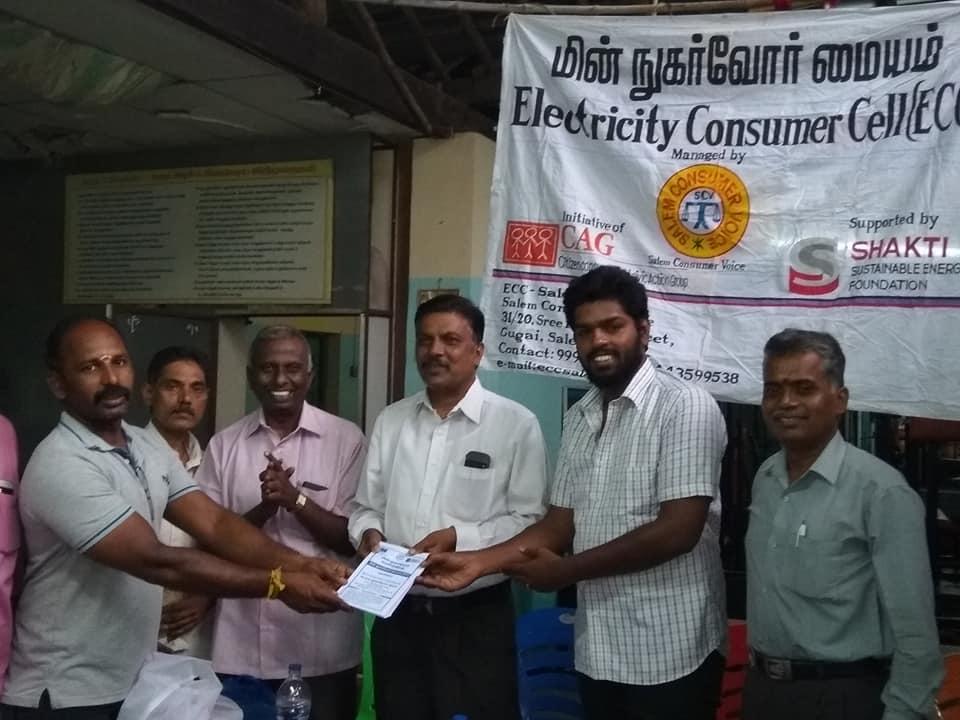 Mr. I.Prabakharan, ECC coordinator, Salem, concluded the session with a vote of thanks. 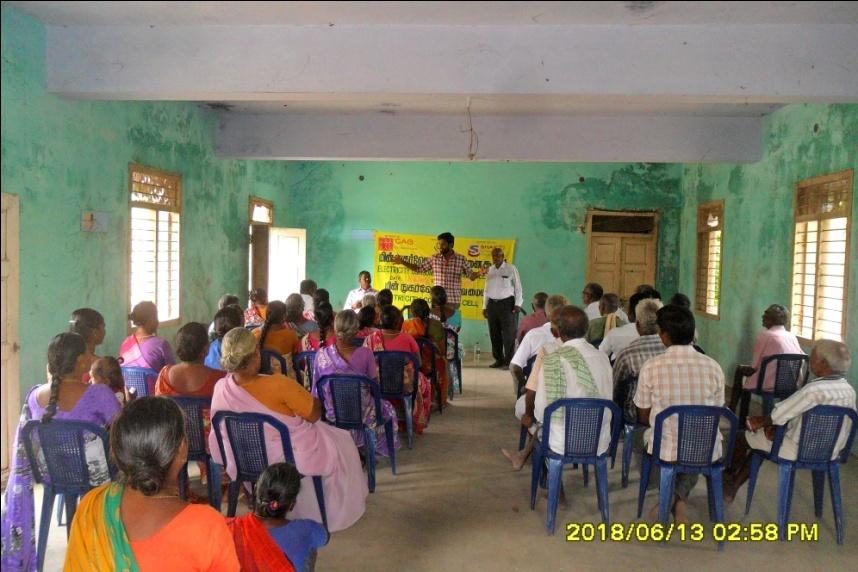 Mr.G.N. Bharath Ram, Researcher, CAG explained the objectives, functions, and role of ECC Tiruvannamalai in detail. He described the details of the ECC booklet that includes information on forms and procedure for name transfer, the functioning of meters, grievance redressal mechanism, application for new electricity connection, etc. 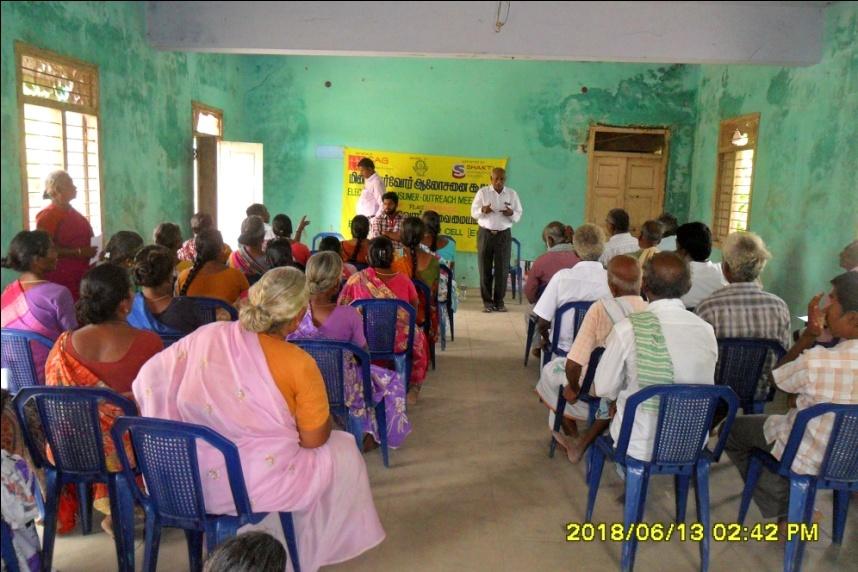 Mr. Anandan, Advisor, ECC Tiruvannamalai, clarified the questions raised by the participants on damaged LT post and street lights which are not restructured for past two months, he instructed the participants to write a complaint letter addressing the Assistant Engineer.  He also informed the participants about the “Grievance Day Petition” held at District Collector Office once in every month, where all the TNEB Officials such as Executive Engineer, Assistant Executive Engineer, Assistant Engineer, and Junior Engineer are answerable to Chief Engineer as well as to the District Collector.  He explained uses and need of the energy efficient products like LED bulbs, LED Tube lights which are sold at the subsidized price in the electricity board offices of Tiruvannamalai District. 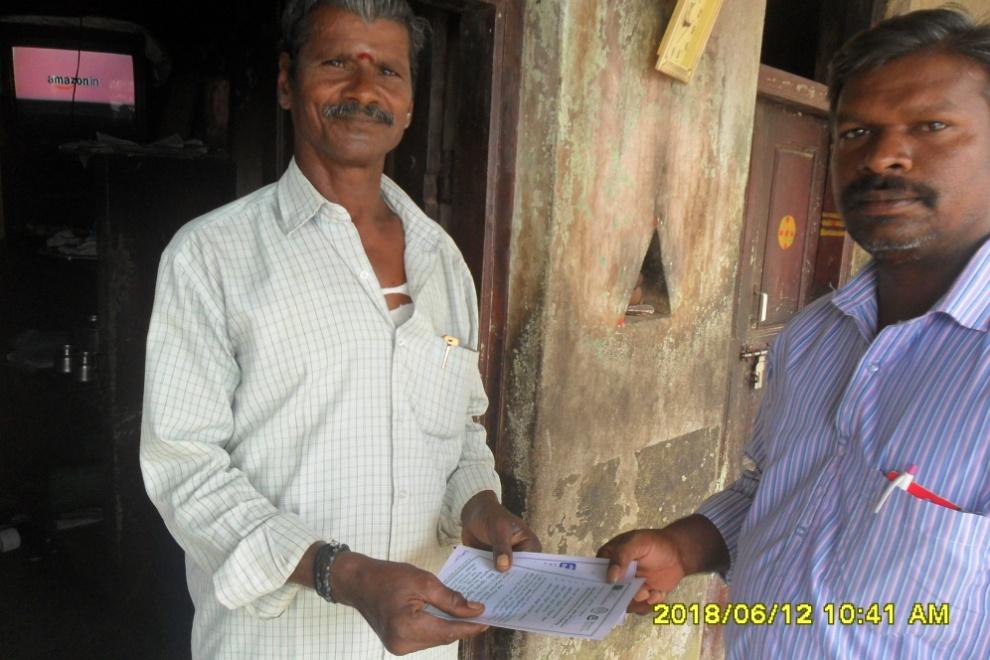 Mr.Ashokan, Coordinator, ECC Tiruvannamalai, concluded the session with a vote of thanks.

In a thermal power plant (TPP), water is used for various purposes such as in the boiler, cooling system, and coal and ash handling systems, with the bulk of the quantity being used in the cooling system. As per Environment (Protection) Amendment Rules, 2017, notified by the Ministry of Environment Forest and Climate Change (MoEF&CC), all new plants installed after January 1, 2017, should not consume more than 3m3/MWh power produced.

Investment in infrastructure plays a critical role in ensuring a country’s development. It is perceived that growth in infrastructure will establish a better economy and create a more equitable world. This, however, has led to a significantly greater demand on natural resources for energy, water, and food. These infrastructure projects, which have been the main cause for rapid urbanization, have also been implicated in reports of increasing environmental damage and weakening human rights.

Rapid growth in world population, industries, and technologies has led to a greater demand for energy sources in order to meet future needs. However, there are still some parts of the world which are not able to meet their current energy needs. 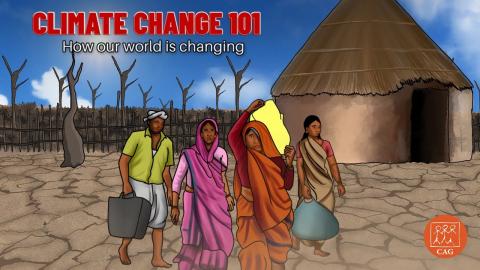 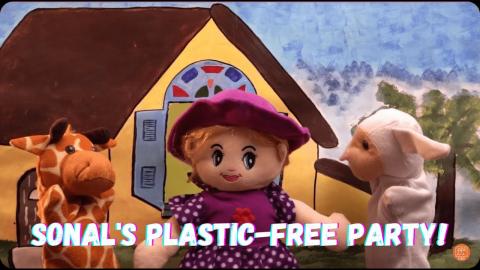 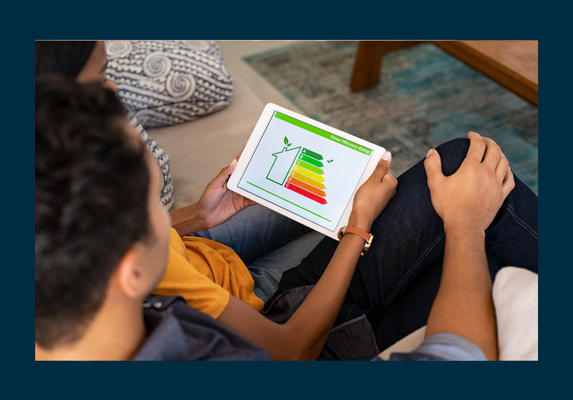 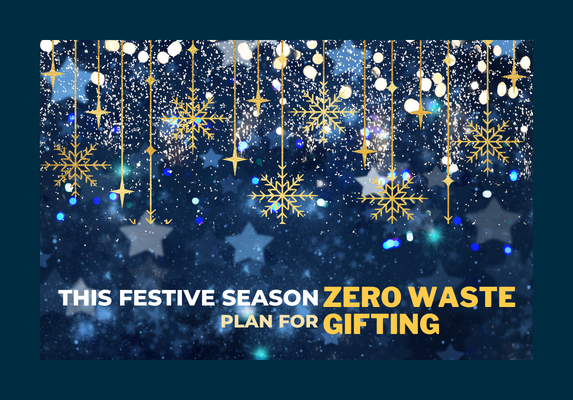